Wadokuroya in Chichibu, Saitama Prefecture was the 8th century home of a copper mine that produced the first coins in Japan in the Nara Period.

In the year 708 AD, a large deposit of high-quality copper ore was discovered in the Kuroya Valley in the mountains of Musashi Province, today's Chichibu in Saitama Prefecture. With the Imperial Court being based in western Japan at that time, Musashi Province was considered wild and remote. 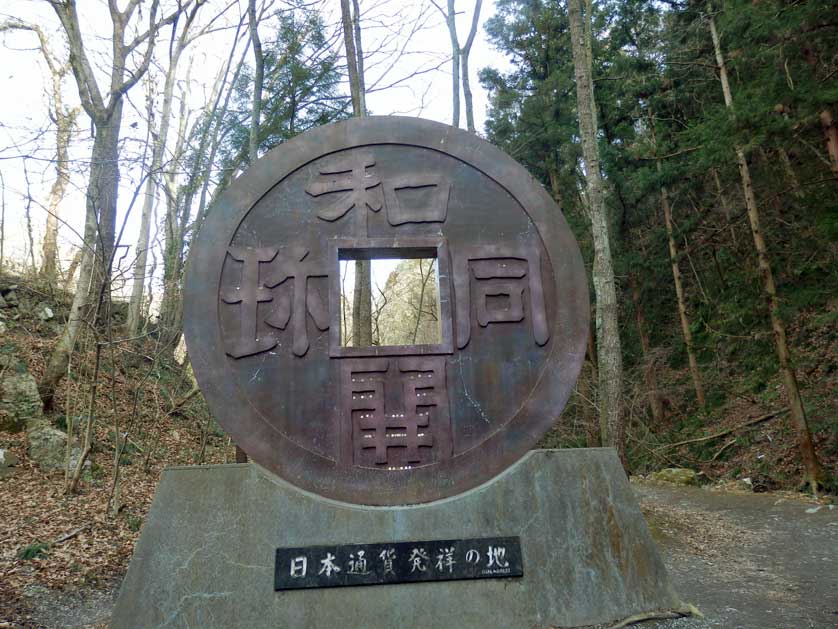 Empress Genmei and the Start of the Nara Period

Empress Genmei had just the previous year, 707AD, taken over the reign from her son, Emperor Monmu, who had died at the age of 25 after a ten-year reign. Since Monmu's own son was still too young to govern, Genmei reluctantly filled the slot as a sort of substitute empress at first. She soon became ambitious, however, to leave her mark on the country.

Genmei soon started to prepare moving the Imperial court from rural Fujiwara-kyo castle to Nara, a new city just being built at the time and modeled after Chang'an, the capital of Tang China. This move turned eventually out to constitute the start of the culturally immensely influential Nara Period in Japanese history (710 - 794). For Empress Genmei, the move was a huge financial risk. Building a new city doesn't come cheap. 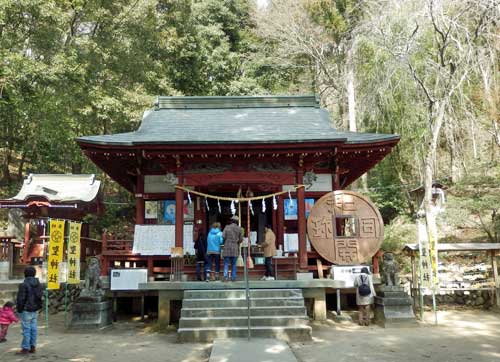 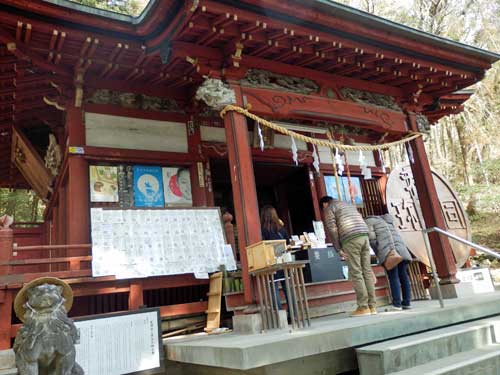 People praying at Wado Hijiri Shrine, gratuity notes to the shrine for achieving financial success to the left

When the first load of newly discovered copper arrived in Nara from Kuroya, Genmei was delighted. Suddenly, an unexpected source of funds to pay for her plans had opened up. She quickly ordered the mine to be developed and the first Japanese coins to be minted on a grand scale: the Wado Kaichin.

Not only that, Genmei changed the name of her Imperial era from Keiun (a name she had kept from the reign of her son) to Wado.

To introduce the new currency, nationwide celebrations were held, including an amnesty for prisoners. Musashino Province received tax-free status and generous gifts were handed to the poor.

Meanwhile, the ancient local Hijiri Shinto shrine was moved to the Kuroya mining site. One hundred high-ranking government officials were supposed to attend the inauguration ceremony of the shrine. But since travel from Nara to Musashino was considered too difficult, a master Nara goldsmith was ordered to forge a pair of centipedes from the first load of Wado copper. Those copper centipedes were then presented at the inauguration ceremony of the shrine as a gift from Empress Genmei. They are still the most treasured relics at the shrine today, along with 13 pieces of rich Wado copper ore. Copies of them are on display close to the Wado Kaichin monument.

A more recent interpretation sees those copper centipedes however as a play on the Japanese proverb that "Money has many legs. It's easily gone." 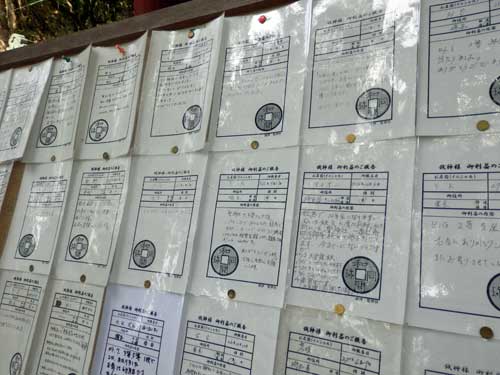 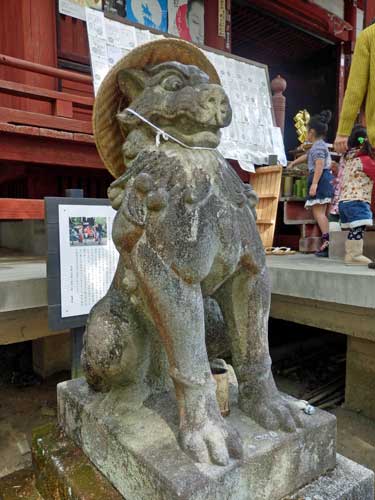 Mining and minting started on a professional scale in August 708 AD. The Wado Kaichin coins were modeled on the Chinese Kai Yuan Tong Bao coins, already in circulation in Japan.

Like the Chinese coins, Wado Kaichin were round, had a square hole in the center and a diameter of 2.4 cm. Four Chinese characters were minted on the coin. Read clockwise, they read "Wado Kaichin" when pronounced in Japanese.

The government decided the value of one Wado Kaichin to be the equivalent of 2 kg of rice. Two kilograms of rice were the then standard one day payment for a manual laborer in government service.

Up to the introduction of the Wado Kaichin, barter trade had been the rule in Japan though Chinese and Korean coins also came in use during the 6th and 7th centuries AD.

The government heavily promoted the use of the Wado Kaichin to the general population, not least because the government was able to set their face value which was of course higher than the actual value of their metal content. Tax payments for example began to be demanded in coins rather than goods.

In practice, however, the Wado Kaichin were used mainly in Nara and its environs while the remainder of Japan largely carried on with the traditional barter trade. 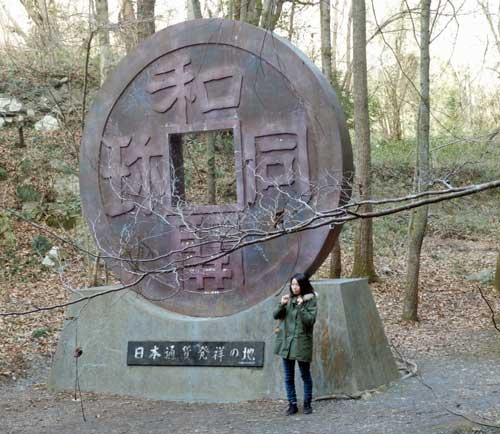 Today, the old Wado mine in Chichibu Kuroya is a historical site a close walk from Wadokuroya Station on the Chichibu Railway line.

After entering the narrow access road from Route 140, you first arrive at Wado Hijiri Shrine. Since its first construction in 708 AD, the shrine has been rebuilt five times, the new building always exactly copying the previous shrine.

Wado Hijiri Shrine is a beautiful little mountain shrine with a large wooden replica of a Wado Kaichin and two stone guardian dogs (komainu) outside. Strangely, the dogs wear hats.

Naturally, the shrine is a place to worship the gods of money. You can submit a written wish for prayer and hand it in along with a donation of at least 1000 Yen. The priest will then pray for your luck in financial matters. A large display of gratitude notes posted in front of the shrine seems to attest to the power of the prayer: many people report large wins at the lottery, the horse races, at pachinko.

In fact, it's mostly gamblers who submit the prayer requests in the first place.

A small museum at the shrine displays old coins and various historical artifacts.

From the shrine it is a 600m walk to the old mining grounds, passing through fruit gardens and abandoned rice terraces.

A 4m high steel monument, another replica of an old Wado Kaichin, marks the entrance to the old mining area.

Right in front of the monument, you find a metal explanation sign with a glass section in it. Through the glass you can see a replica of Empress Genmei's pair of copper centipedes and a piece of copper ore.

To the right of the monument is a shallow river and in the steep rocks ascending behind it, you can still see the grooves the old miners hammered into the mountain, hacking away at the copper lodes. It was open cast mining here.

None of the on-site copper extraction and coin minting facilities have survived the many centuries since the Nara Period. Today, Kuroya is a rural area once again, nice for a stroll through the forests and rice fields. 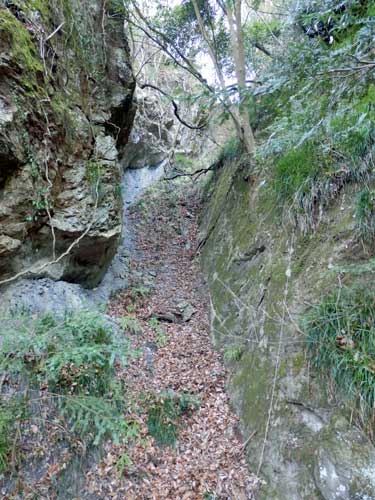 Remains of a groove dug into the mountain side to exploit a copper ore lode, Wadokuroya, Chichibu

Chichibu can easily reached from Ikebukuro Station via the Seibu Line Red Arrow Express train (in as a little as 78 mins).

Slower trains necessitate a change in Hanno from the Seibu Ikebukuro Line to the Seibu Chichibu line.

To get to Wado Hijiri Shrine and the historic Wado mining site, take the Chichibu Railway in direction Hanyu to Wadokuroya Station.

Wado Hijiri Shrine is a short walk along Route 140 towards Nagatoro.

From central Tokyo: Drive the Kan-etsu Expressway towards Niigata, get off at Hanazono IC, take Route 140 towards Chichibu. The shrine and the remains of the mine are to the left, shortly before Wadokuroya Station. 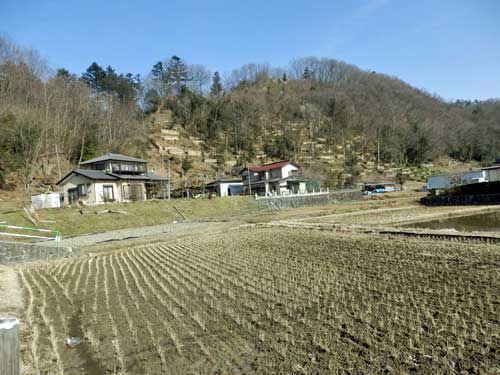 The Naguri Valley (名栗) near Hanno in Saitama Prefecture is a popular destination for Tokyoites seeking hiking, camping and temples.

Mount Oyama, in Kanayama Prefecture, is a popular hike within reach of Tokyo, 60km to the east. Mount Oyama is known for its numerous shrines and temples and spectacular autumn leaves.