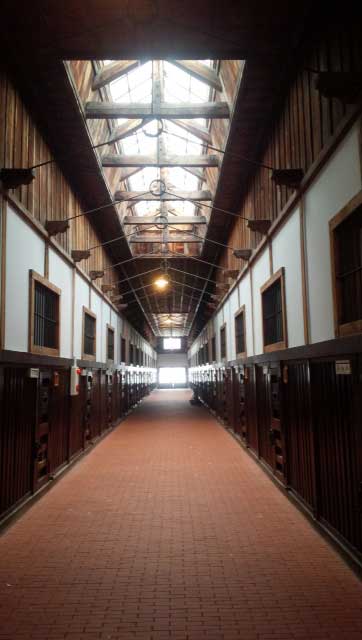 For almost a century, the town of Abashiri in north-eastern Hokkaido was the location of Japan's most notorious and most feared prison.

Only the most hardened criminals were brought to this forbidding place on the Okhotsk Sea where the harsh winters bring the Siberian drift ice to the shore.

The work was hard, the cells crowded and the wardens were strict and did not tolerate even the tiniest infractions of the rules.

Abashiri stood for the most severe punishment Japanese judges were to hand out short of execution. Crossing the bridge over the Abashiri River to enter the heavily guarded gate in fact meant reaching their final destination for many a brave yakuza, daring robber and reckless outlaw.

Murderers and the like were swiftly executed in those days, they usually did not even start the trek up here. In the early days, anyway. 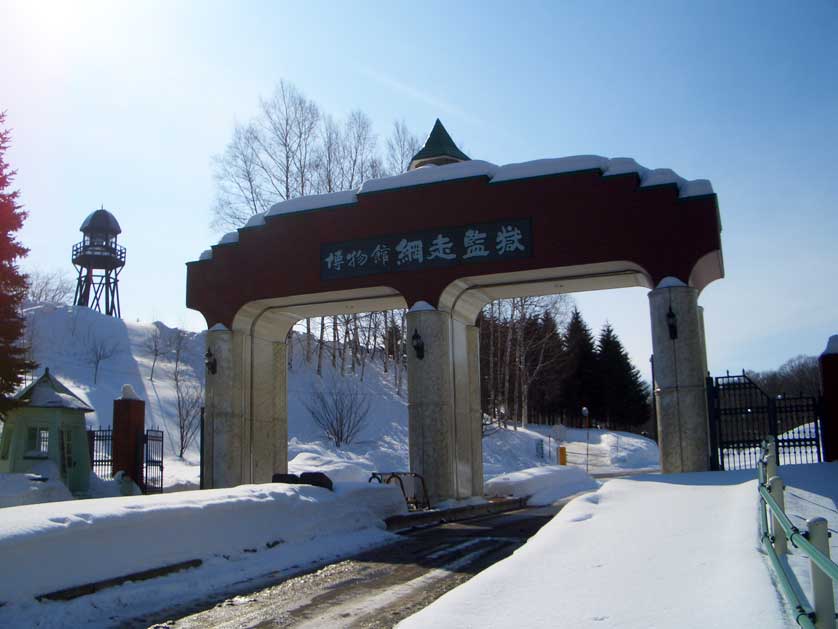 The original prison was in operation from 1890 to 1984. Then the site was cleared and most of the structures were carefully removed from the edge of Abashiri town to a new site on the slopes of Mt Tento.

On the original site, a modern correctional facility was built which is still in use today.

The old prison was re-created as museum. It has recently been partially overhauled - with an added twist. The original narrative of the museum was to show how well the prison served its purpose in making the offenders reflect on themselves and their deeds and thus contributed to justice and the improvement of both the prisoners themselves and society in general. The newly added twist turns the first arrivals into tragic national heroes. 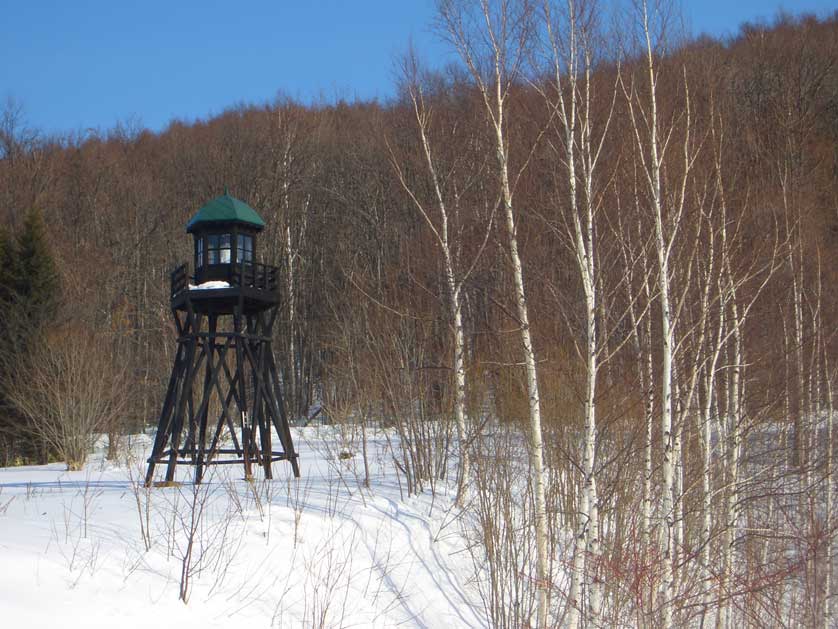 In 1890, the borders in East Asia were still not clearly defined. Japan claimed Hokkaido but the Meiji government was afraid that imperial Russia would march into the northern part of the island which was still in a state similar to Siberia. There was not much else other than a few fishing villages and vast expanses of forests populated by bears.

This land had to be quickly developed and connected to the settled parts of Hokkaido. Thus in the spring of 1890, a first batch of prisoners was dispatched to the strategically located fishing village of Abashiri. The prisoners came from all over Japan and their first task was to build a road connecting Abashiri to an already developed outpost close to Asahikawa in Central Hokkaido.

The road work was extremely hard. Everything had to be done by hand. The trees felled, the terrain cleared, the road constructed, the bridges built, while food was scarce, accidents very common and on top of it, every prisoner had a heavy iron ball chained to a foot to prevent them from disappearing into the wilderness. Working through the extreme cold of the Hokkaido winter, the road was finished in record time. Japan could now rightfully claim Northeast Hokkaido as her land.

The death toll among the prisoners was extremely high. At the time, they were seen as expendable human resources but the museum now has a special hall built to commemorate them. A dramatic movie is shown there, plenty of pictures demonstrate their plight and yes, you can chain an iron ball to your leg and walk a few steps with it. Certainly an interesting experience for a minute or two but imagine wearing this thing 24 hours a day while doing extremely exhausting and dangerous road building work out in the primal forest! 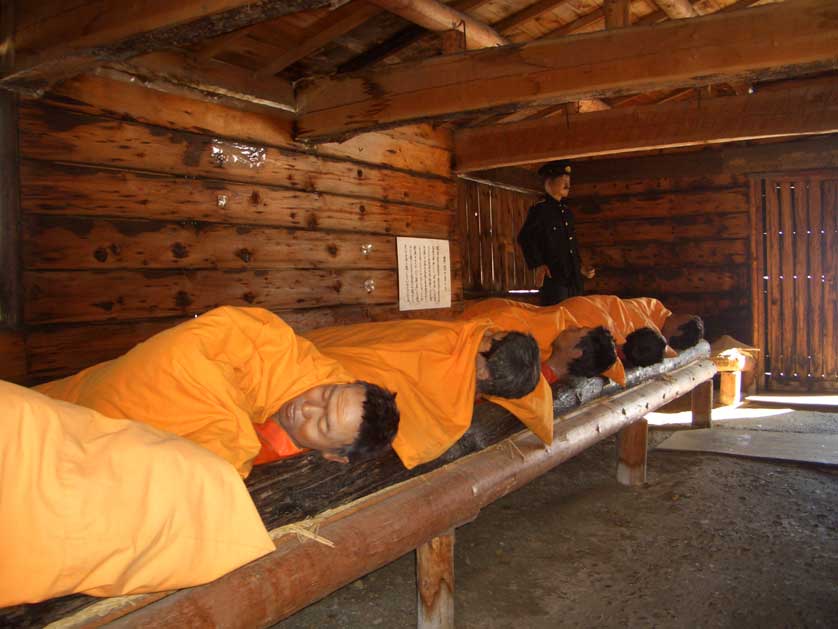 Once the road was set up, the focus turned to Abashiri prison itself. The prison was properly set up, but burned down in 1909, though by 1912, most of the structures you see here today were ready for long-term use.

First, there is the Mirror Bridge, originally leading over the Asahikawa River. The name of the bridge is said to derive from the fact that the prisoners could see their own reflections in the water of the river. The faces of guilty men when they entered, the faces of reformed men when they left. If they ever left, that is. But that whole mirror face business sounds a bit too much like sentimental government propaganda to be truly believed.

You walk over a reconstructed version of this bridge when you enter the prison museum. Since there is no river on Mt Tento a sort of moat has to do the job.

Then, you buy your ticket at the stone prison gate. Enter the compound and you will see that it is very spread-out, just as the original prison was. The center piece of the prison was a radial five wing cell block setting, built from wood. You can walk through most of it and also enter some cells. 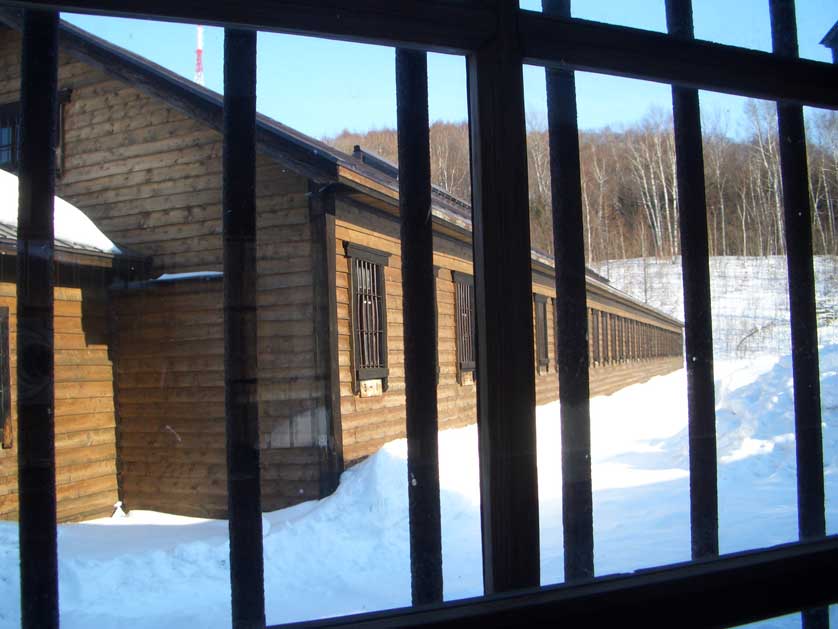 The cells do not look like too bad a place to be. A central coal-fired heating system provided some comfort in the winter and the strict regiment of the prison certainly made sure that everything was clean and tidy.

In fact, as you will learn when further exploring, Abashiri adopted a modern reform approach from the 1910s on. Large farms modeled on state-of-the-art American agricultural enterprises were created outside the prison, putting the prisoners to useful work and providing them with valuable skills at the same time. The vegetables and pickles produced there are claimed to have been among the best in Japan.

There is a court house for local offenders (yes, locals were also sent to the prison), there are reconstructions of temporary lodging houses out on the farms (which do not look comfortable at all!) and of the separate windowless arrest cells for offenders breaking the rules. Not exactly nice places (what would you expect?) but offenders stayed there for a maximum of 7 days. Prisons in Europe and America at the time were much harsher in that regard.

Finally, there is the bath house. Bathing was the one pleasure the inmates were granted once a week - with cold water in the summer and hot water in the winter. On the one hand to prevent skin diseases from spreading, on the other to give the inmates a sort of release every once in a while. Something they could look forward to.

As is customary in many Japanese museums, there are many life-sized dolls placed in the key locations to "re-enact" the way life was back in those days. The bathhouse group of nude dolls is certainly the most impressive here. You can see them only with their backs turned to you but they are a very interesting group anyway. Not all, but many sport full-body yakuza-tattoos. Really beautiful ones, actually.

The leaflet (available in English) you receive when entering the museum compound, suggests two walking tours, one taking about 40 minutes, the longer one 60 minutes. In fact, if you get really interested in the place, there is enough to see here for at least half a day. Keep strolling through the compound and you will discover the less advertised buildings. The reconstructed prison kitchen for example.

In the winter, not all of the facilities are open. But you can still step through the deep snow and have a peek through their windows. This affects however only the lesser known, less advertised facilities. 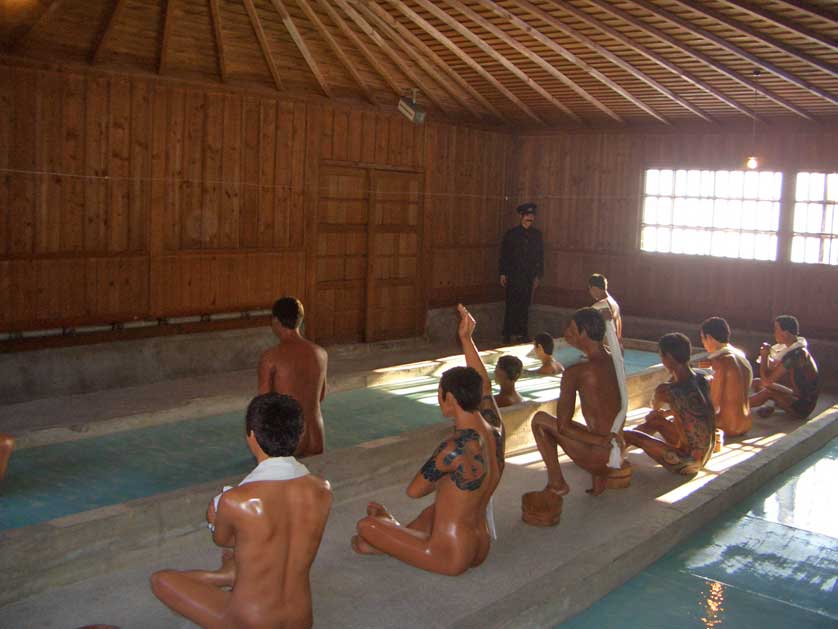 Once you step outside the gate again, head towards the canteen. From spring to fall, you can enjoy a recreation of an original prisoner's meal - though certainly in a decidedly upgraded fashion. It was not available when this writer visited in the midst of winter.

So, this was Abashiri Prison yesterday, what about the Abashiri Prison now in operation? The museum features replicas of current cells there and gives some good introduction as to what life is like in the new facility. 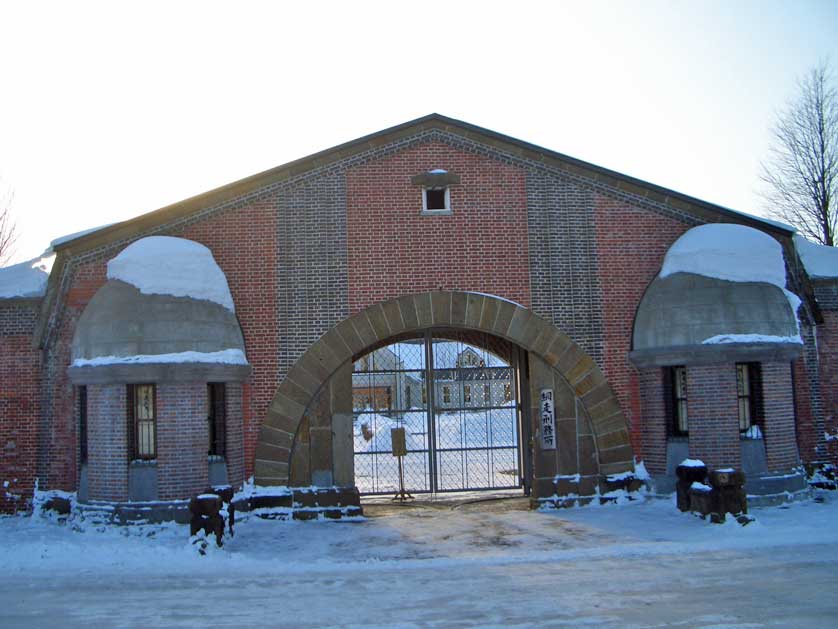 The real, new prison is not far from downtown Abashiri and it has its own bus stop. The former Mirror Bridge is now a concrete bridge not affording much of a mirror image if you look down towards the water. Prisoners are transported by bus or van these days anyway, so the bridge would not make much of an impression on them. But you as a free person can walk over it and to the central gate. It seems however more like being a gate for show - the actual entranceway into the prison for the inmates is more likely some un-ceremonial truck gate somewhere in the back.

The new prison is a medium offender facility for people sentenced to a maximum of 8 years. Unlike the old prison which was dedicated to the tough guys.

In front of the main gate, you will find a souvenir shop. Selling goods made inside the prison. They range from Abashiri Prison Candy to all sorts of hand-made craft work. They stock a really decent variety of interesting things which certainly make good gifts.

But as much improved as the modern prison might be compared to the one featured at the museum, every little detail of daily life in Japanese prisons is still very strictly ruled. If you end up in there, you won't have an easy time - but on the other hand, there is no gang violence in there, no rapes, no drugs, no murders. The system might be tough but it seems to work. 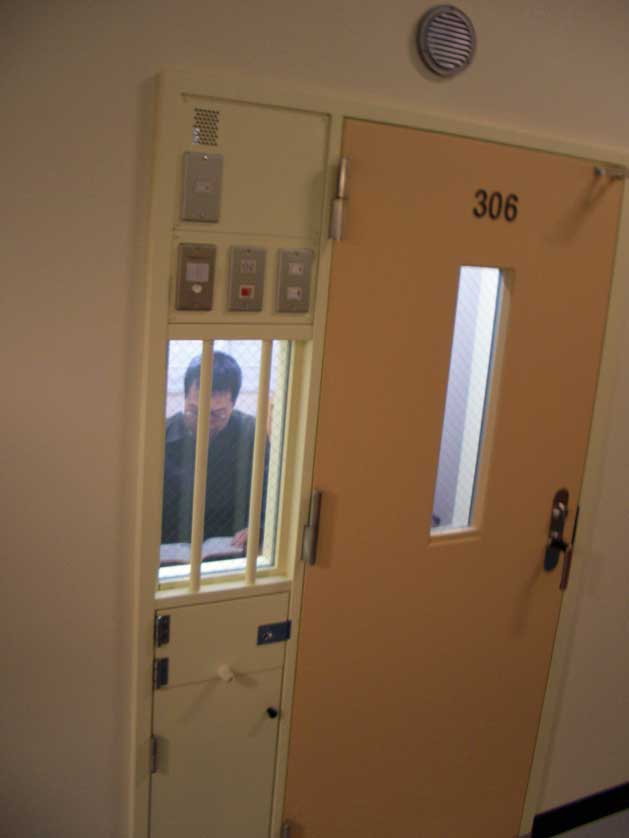 Many films have been made about Abashiri prison.

Doing Time (Yoichi Sai, 2002) gives you a peek at daily life in the new prison as it is today. It was filmed on location inside the prison.

Great fictional drama playing out in the old prison can be seen in Abashiri Bangaichi by director Teruo Ishii, made in 1965. This film started a long series of Abashiri prison films under the same title, while at the same time kick-starting the career of actor Ken Takakura.

English website of Abashiri Prison Museum, with info on opening times, ticket prices and the exhibition:

The site also features texts on the prison history but those are written in a very hard to comprehend "English". 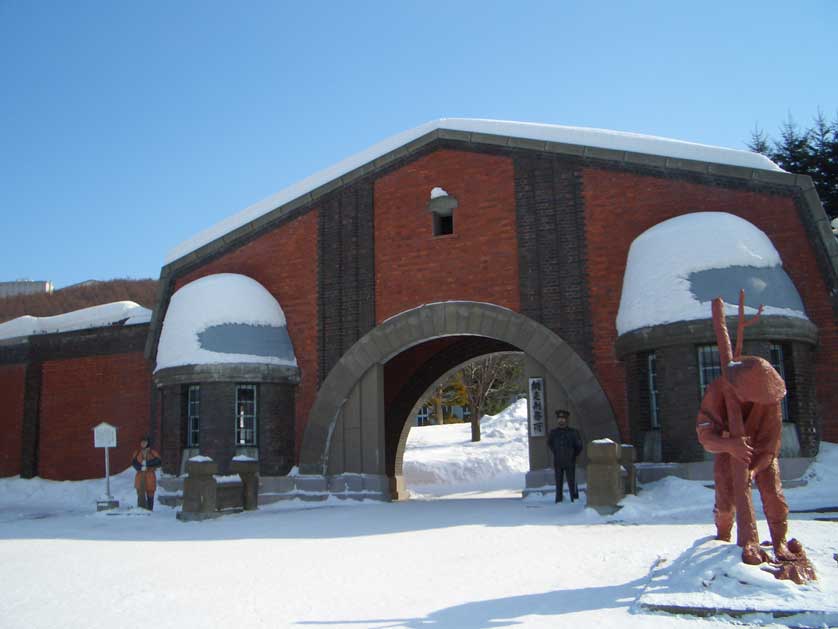 The Hokkaido Museum of Modern Art

Located right in the center of Sapporo, the Hokkaido Museum of Modern Art offers beautiful collections allowing you to discover Japanese art, but also European art, from the 19th century to the pre

If you have the chance to visit to the northern island of Hokkaido, do not miss the Sapporo Beer Museum!

With its American style architecture and its wooden structure, you could almost think you are in New Orleans...