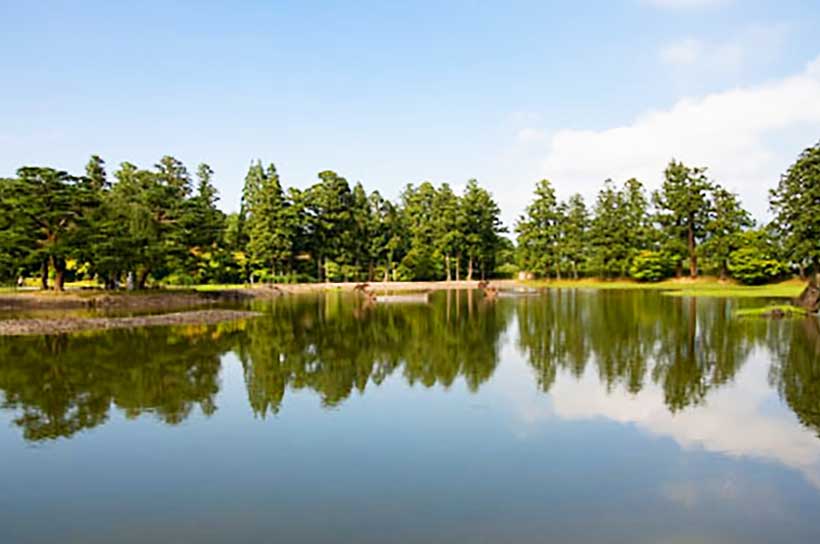 Hiraizumi is a very small town in Iwate prefecture, about 125 km north of the city of Sendai, that retains charming traces of former greatness.

The haiku-master Basho lamented of Hiraizumi that,"The summer's grass, 'Tis all that's left, Of ancient warriors' dreams" but for about a century, during the Heian Period, the then city of around 100,000 people rivaled the wealth of Kyoto in its sophisticated arts and refined culture. Hiraizumi's wealth was based on its local gold mines, on the basis of which the Fujiwara clan attempted to build a "paradise on earth" at the beginning of the 12th century with large temples, palaces and monasteries.

Hiraizumi is connected with the fate of one of Japan's greatest heroes, the warrior Yoshitsune, who fled here from his jealous brother, Yoritomo Minamoto in Kamakura. Yoshitsune was betrayed by Yasuhira, the last Fujiwara leader, and executed. Later, Yoritomo turned his wrath on the Fujiwara and wiped them and their city out, thus inspiring Basho's poignant haiku of "warriors dreams".

Little now remains of the city of the Fujiwaras but the town is redolent with reminders of its glorious past.

Hiraizumi was added to the list of UNESCO World Heritage sites in Japan in 2011, with Chusonji Temple and the Golden Hall the centerpieces of Hiraizumi's petition to the world body. 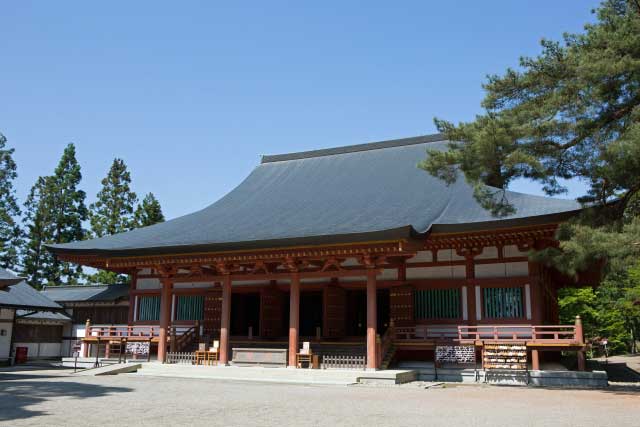 The temple complex of Chusonji (Tel: 0191 46 2211) is Hiraizumi's major sight. Founded in 850 by the priest Ennin, the complex was greatly expanded by Fujiwara Kiyohira in the early 12th century and at one time included nearly 40 buildings.

The temples are reached through a long approach through a wood with views down to the Kitakami River and Mount Kotagatamine. On the left is the small wooden Benkeido which was rebuilt in 1828. The shrine is dedicated to the god of war and contains a wooden statue of Benkei.

The Main Hall (Hondo) of Chusonji Temple is next up on the right. The building dates originally from the Heian Period though the present building was re-constructed in 1909. The main hall contains an image of the Amida Buddha. 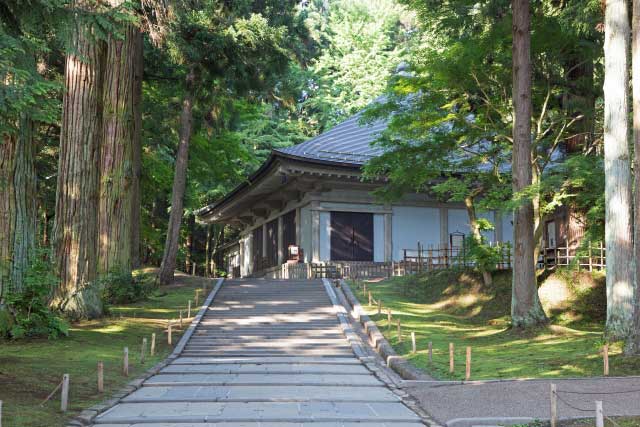 The Sankozo (Treasure House) Museum, a little up the hill to the left, is not to be missed and has over 3,000 exhibits. Three, large impressive wooden, gilded statues of the Buddha greet the visitor on entry and another highlight is a stunning 1.74m-tall image of a "Thousand Arms" Kannon - the goddess of mercy.

The Sankozo Museum also features relics from Hiraizumi's past including swords, scrolls, kimono, a beautiful, lacquered box for storing the severed head of one of the Fujiwara clan (kubioke) and video explanations of the restoration work which is on-going at Chusonji as it strived for UNESCO World Heritage status. Photography is prohibited. 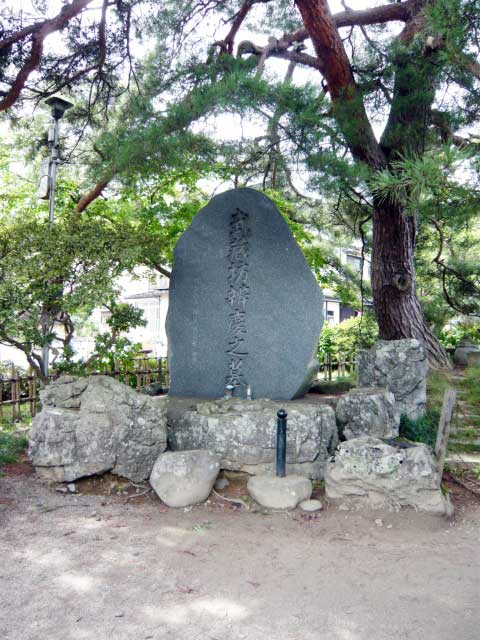 An admission ticket to the Sankozo includes entry to the highlight of Chusonji, the stupendous Konjikido or Golden Hall. Built in 1124, the 5.5 meter square Buddhist altar with four pillars is coated with black lacquer plated with gold leaf and mother-of-pearl inlay.

Intricate, decorated golden images of Amida Buddha, Bodhisattvas and guardian kings crowd the interior. Under the structure are laid to rest the mummified remains of three rulers of the Fujiwara clan: Kiyohira, Motohira and Hidehira, and the latter's son, Yasuhira. It is the only example in the world of four generations preserved together.

Outside the Konjikido is the Kyozo or Sutra Hall originally dating from 1108 which used to house over 5,000 sutra scrolls written in gold and silver ink on indigo paper. Many of these scrolls are now in the Sankozo or preserved on Mount Koya.

Other buildings are a 19th century thatched Outdoor Noh Stage (Nohgakudo) next to the Hakusan Shrine. 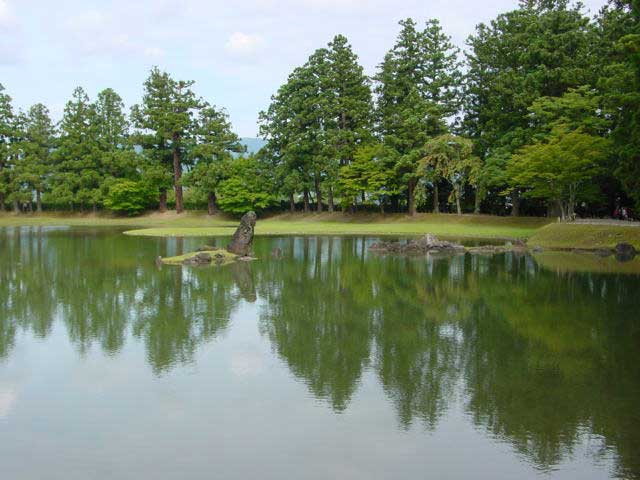 Like Chusonji, Motsuji is believed to have been founded by the priest Ennin in the 9th century. Most of the buildings are no longer standing except for a few foundation stones, but the exquisite, tranquil Jodo teien Heian garden with its large pond is beautifully preserved. There is a small museum to the left of the main entrance with images of Motsuji's fascinating festivals (see below).

The main hall, painted in vermilion, contains a Buddha image (Yakushi Nyorai) and was rebuilt in 1989. The structure remains true to the principles of Heian Period architecture.

The Yumeyakata Museum (Tel: 0191 46 5011; admission 700 yen), near the main car park for the Chusonji Temple complex, recreates the history of the Oshu-Fujiwara clan using life-sized wax models, holograms and images.

There is also a restaurant and a souvenir shop selling local Iwate Prefecture products including lacquer ware, noren curtains and Japanese sweets. 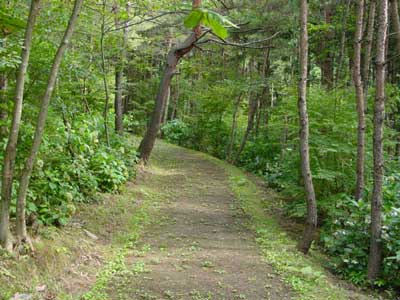 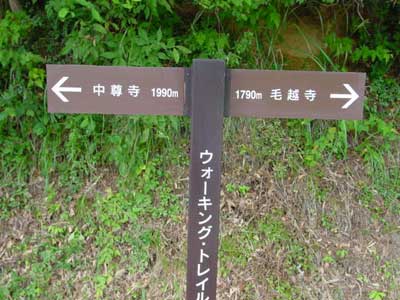 Just behind the Sankozo Museum there is an excellent path leading to Motsuji about 3km away. The trail passes over boardwalks through small marshes and the specially prepared beaten turf track through the woods is a delight. Carry on a further 800m on the road to reach Hiraizumi Station and the Tourist Information Office (Tel: 0191 46 2110).

Motsuji's two major festivals are the Floating Poetry Festival Gokusui no En on the fourth Sunday in May and the Longevity Dances (Ennen no Mai) held under torchlight on January 20 and again during the Spring Fujiwara Festival May 1-5 and Autumn Fujiwara Festival November 1-3. The Gokusui no En entails people in aristocratic Heian Period costume composing traditional waka poems as cups of sake are floated down the Yarimizu stream. If participants fail to pen a poem in time they have to drink the sake. (Maybe not such a penalty!)
Ennen no Mai are sacred, masked "longevity" dances performed after various Buddhist ceremonies and festivals. 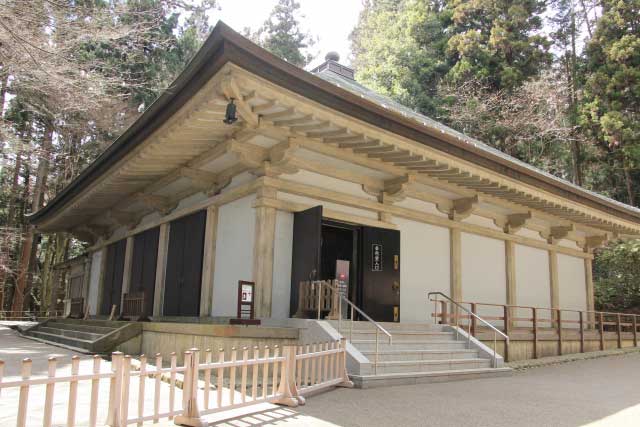 Hiraizumi pretty much shuts down after dark when the last tourist buses have departed. There are a few restaurants to sample if you are staying overnight near the main station.

Shizukatei is closer to Ichinoseki Station - the next station south - but is a clean, minimal, convenient hotel for the budget-minded traveler, with free parking, great Wi-Fi, on a major road, and with stores and restaurants nearby.

Shizukatei offers the luxury of a full Japanese-style welcome and stay, on kempt, spacious premises in a calm rural setting and hospitality focused on high-class Japanese cuisine. Includes hot spring baths to soak off the day's tiredness. Be treated! 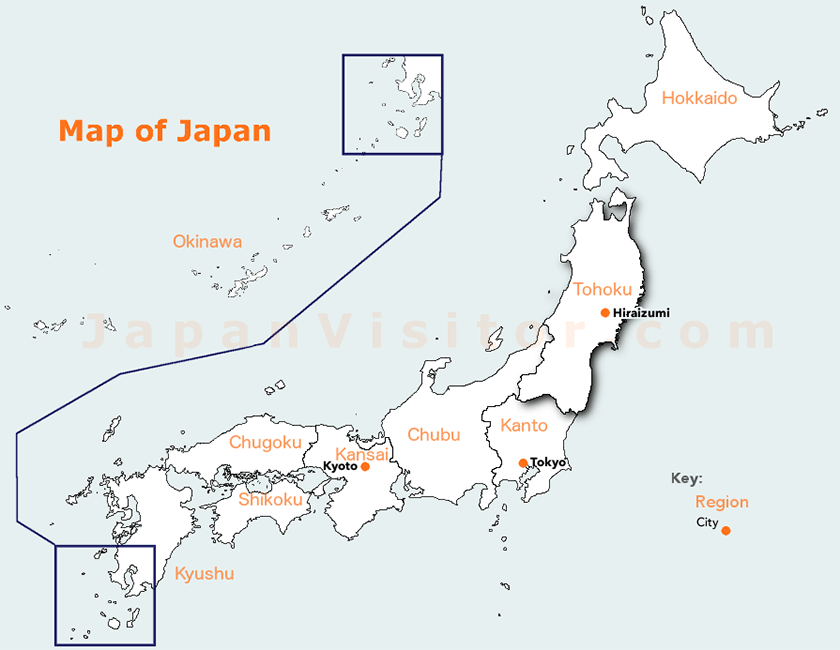 Flight connections from Sendai Airport to Tokyo, Osaka, Sapporo, Nagoya, Fukuoka, Beijing, Seoul and other Asian destinations. Sendai Airport (Tel: 022 382 0080) is 18km south of Sendai city center and connected by bus (40 minutes) and train (17 minutes by express). There is also a direct bus from the airport to Matsushima-kaigan Station which takes about 1 hour.
Hanamaki Airport in Morioka has flights to Nagoya, Osaka, Fukuoka, Sapporo and Okinawa.

There are buses to Chusonji from both Ichinoseki and Hiraizumi stations or it is 10 minutes by taxi. Hiraizumi is on National Highway 4. From the Tohoku Expressway exit at Ichinoseki or Hiraizumi - Maesawa Interchange. 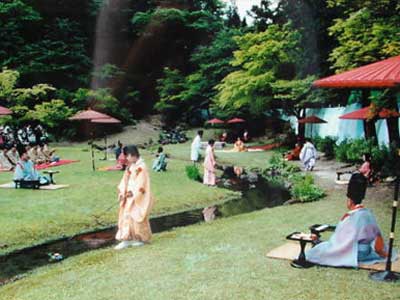 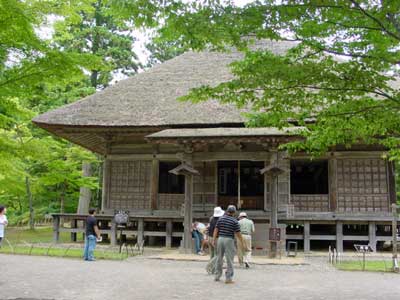