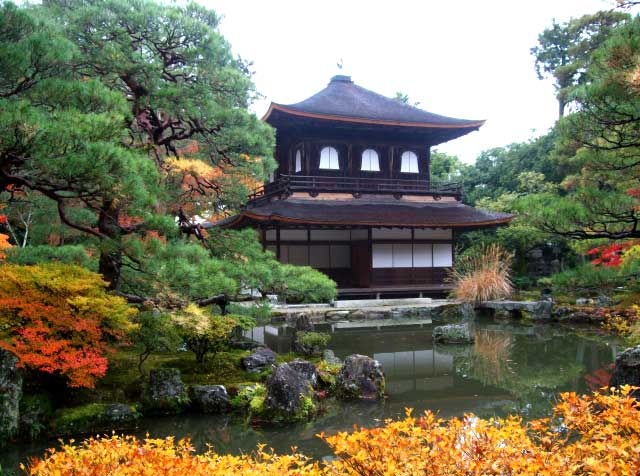 Ginkakuji Temple, Kyoto, a masterpiece of the Muromachi Period

Go-Daigo managed to flee Kyoto in January 1337 and establish his own junior line court in the mountain wilderness of Yoshino (in present day Nara Prefecture) some miles south of Kyoto. Meanwhile the Northern (senior line) Court presided in Kyoto, although actually controlled by Ashikaga Takauji. Unlike the previous Bakufu, under the Hojo, which had established a parallel government in Kamakura, the new Bakufu under Takauji felt obliged to remain in Kyoto and exert direct control.

The next few decades were spent trying to solve the succession dispute by fighting the junior line Southern Court. In the Northern/Southern Court stand-off (or, Nambokucho), the junior-senior dispute that began just over one hundred years before, became its fiercest ever. The unyielding Southern Court could count on considerable support throughout the country, especially in northern Japan, and managed to invade Kyoto several times.

In 1368, Ashikaga Takauji was succeeded as Shogun by Ashikaga Yoshimitsu. 10 years later, Yoshimitsu moved his administration to the Muromachi district of Kyoto, from where the era and the government gets its name. While the civil war that had torn the country under Takauji declined under Yoshimitsu, so did Ashikaga control over outlying regions of Japan, as increasing power was given to the regional constables, later to be known as daimyo. The Northern-Southern rift was ostensibly healed under Yoshimitsu in 1392, but was an effective victory for the Northern Court.

The power of Yoshimitsu's successors over the daimyo further declined. Meanwhile, as a result of internal strife in the Hatakeyama clan from around 1450, the power of the Hosokawa clan, to which Takauji had given constableship of the island of Shikoku, rose.

Economically, the country became more prosperous through new trade with Ming China, reforms of the inheritance laws, the participation of women in the economy, and agricultural improvements. In short, a money economy developed, leading to the development of new social classes, which formed the root of the unrest that followed - exacerbated by a string of natural disasters such as famines and earthquakes in the early 15th century that added to the woes of the peasantry.

The decline of the Ashikaga Shogunate over the next 70 years created a power vacuum that the various newly-energized players, in particular the emergent samurai class, in Japan's now-changed landscape tried to fill. This culminated in, and was in turn given free rein by, the Onin War of 1467-77.

Much like the Emperor, whose rule was purely symbolic and whose power was wielded by the Shogun, the Ashikaga Shoguns, too, had become symbolic rulers on whose behalf real power was exercised by their Deputies, or Kanrei. The Hosokawa clan had become one of three clans that now controlled the Kanrei, the other two being the Shiba and Hatakeyama clans. The position of Kanrei revolved among the three. In the mid-1460s, Hosokawa Katsumoto, who would himself become Kanrei from 1468 until 1473, became involved in a dispute centering on the succession of the Shogunate that would trigger a change the course of Japanese history.

In 1464, the Shogun Ashikaga Yoshimasa was contemplating retirement. Aged 29, he had not yet had a son, so adopted his younger brother, Yoshimi, to prevent succession problems upon his retirement. However, the very next year, a son, Yoshihisa, was born to him, thus alienating his brother Yoshimi and beginning a feud at the top of society that would be taken up as the "Onin War" by those lower down for their own purposes. 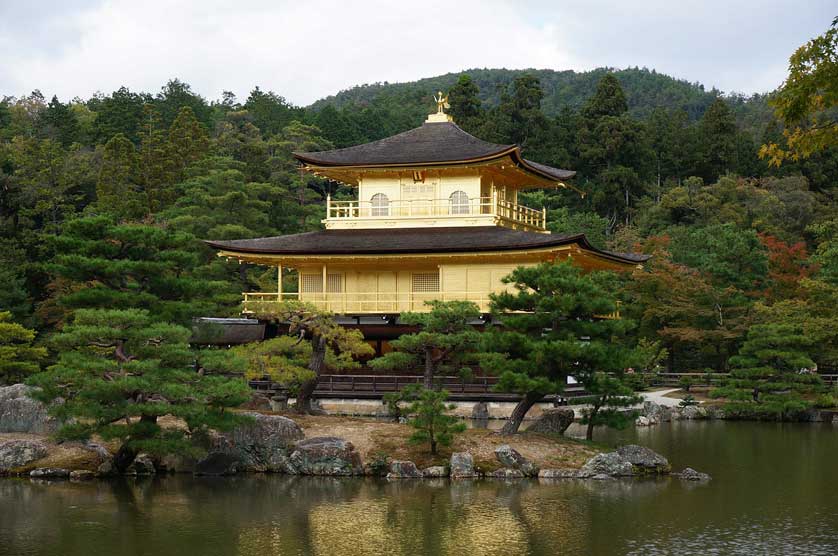 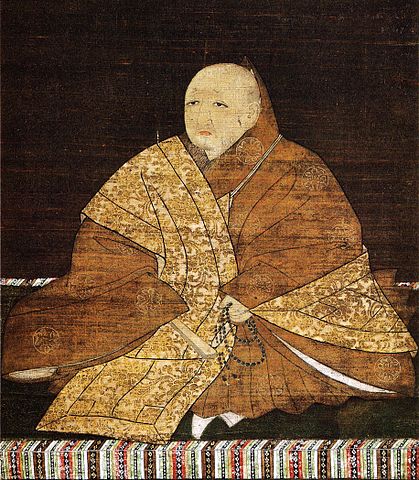 Hosokawa Katsumoto supported the Shogun's brother, Ashikaga Yoshimi, as successor. But Hosokawa's father-in-law, the "Red Monk" Yamana Sozen (in reference to his ruddy complexion), long resentful of his powerful and wealthy son-in-law, purposely supported the succession of the Shogun's still-infant son, Ashikaga Yoshihisa. This new focus of their rivalry led to a clash between their respective forces two years later, in 1466.

By 1467 the ensuing fighting between the Hosokawa and Yamana forces had destroyed most of Kyoto. The Shogun, Ashikaga Yoshimasa, whose actions had arguably been responsible for the conflict, nevertheless took a completely laissez-faire attitude, entertaining himself with poetry readings and the architectural project that became Ginkakuji, the Silver Pavilion, thus letting the flames of war burn freely.

This illustrated how inconsequential the ostensible cause of the war was to the real aims of its combatants. Also, the Shogun's lack of interest in the state of the land gave carte blanche to myriad provincial rivals and disaffected parties everywhere to act on their ambitions and frustrations. Although Hosokawa and Yamana both died in 1473, the war continued. 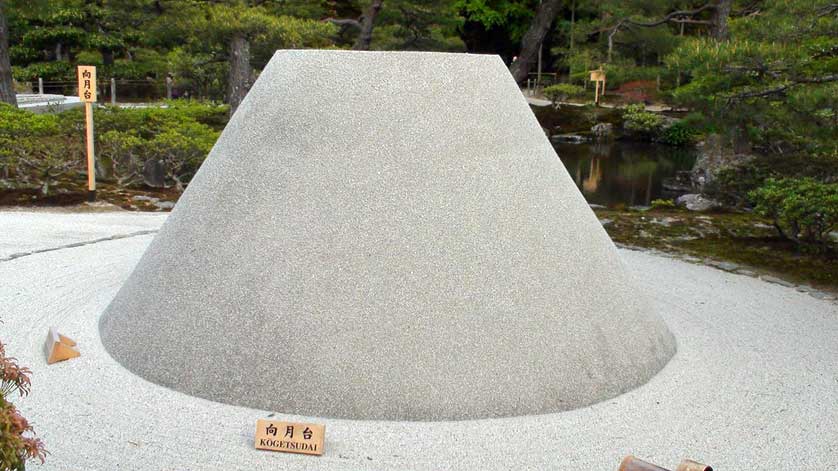 One of the clans that controlled the Kanrei, the Hatakeyama, turned on itself in its native Yamashiro province (overlapping what is now Kyoto Prefecture). The two sides of the clan came to a stalemate that so severely disrupted the lives of the peasantry and lower land-owning samurai (jizamurai) that they revolted in 1485 and established their own army, or Ikki, which drove out all the Hatakeyama forces, and by the next year the populace had even established self-rule.

Similarly, just north-east, in Kaga province (overlapping what is now Ishikawa prefecture) the monks of the Ikko, a sect of Jodo Shinshu Buddhism, allied themselves with disaffected peasants, farmers, Shinto priests, and local nobles in what was called the Ikko-Ikki to successfully revolt against the province's lord in 1488, beginning a movement, and establishing an independence, that would last until the 1580s, when it was finally crushed by the nation's unifiers.

This Warring States period, or sengoku jidai - continuing for well over a century - saw the locally-based military class come to dominate at the expense of the Court, and force of arms take precedence over political ties. It was a period of revolt against the status quo, known as gekokujo, or "the low defeat the lofty."

The old great estates with their absentee landlords fell to the local warlords, or daimyo, and those who cultivated the land were controlled by the local samurai and became their serfs in return for military protection. Newly politicized religious groups also championed the cause of the farmer against the samurai. The economy, however, flourished with the mass movement of troops and the building of castles. Culturally, too, the provinces benefited from the spread of Kyoto court culture via aristocratic refugees from the obliterated capital.

The Ashikaga Bakufu remained under the control of the Hosokawa clan until 1558, when the Hosokawa, too, succumbed to revolt from their vassals, the Miyoshi. Some of the families of the time that achieved greatest power were, in the east of Japan, the Hojo, Takeda, and Uesugi, and, in the west, the Hosokawa, Mori, and Ouchi. 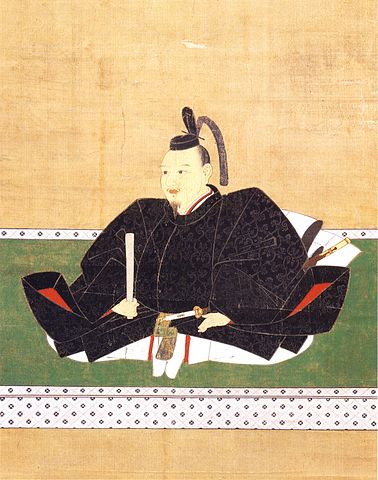 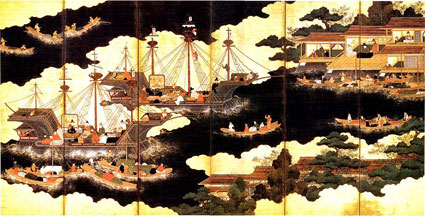 Europeans ("Southern Barbarians" or Nanbanjin) arrived in Japan from the ports of Hirado and Nagasaki during the Warring States period, in the 1540s, bolstering daimyo wealth through new trade, and intensifying the destructiveness of war with new weapons, such as muskets and cannon. Christianity was introduced by Francis Xavier in 1549 and intially made inroads, encouraged by samurai (but not by the monasteries) for the opportunity it afforded for further trade in weapons with the West.

However, by about this time, prolonged warfare had militarily weakened so many daimyo that the great warlords among them were able to compete for broad influence. Among them was Oda Nobunaga, a daimyo from Owari domain (present day western Nagoya) who was particularly favored by geographical location to go on to become the unifier of Japan.

In 1567 Nobunaga agreed to back the Shogun Ashikaga Yoshiaki who had been unsuccessfully seeking daimyo support since his brother Yoshiteru was assassinated in 1565. This gave Nobunaga the authority to advance into Kyoto in 1568 where he exercised his authority using Yoshiaki as a puppet, finally driving him out in 1573, bringing 237 years of Ashikaga rule to an end.

Literature and the fine arts flourished during the Muromachi period, especially notable being the further development of the renga form of poetry, and popular illustrated short stories known as otogizōshi.