Maruoka Castle in Fukui Prefecture is said to have the oldest donjon (tenshu) in Japan. Maruoka Castle has many stairs leading to the entrance.

Maruoka Castle is in Sakai City, Fukui Prefecture. It is one of the only twelve original Japanese castles. I truly enjoy visiting Japanese castles. Sometimes the castles are given various distinctions, such as Important Cultural Asset, Special Historic Site, and National Treasure. Does this mean that one castle is better than another? I have also read that three castles in Japan claim to be the oldest. How can this be? Doesn't a historical record exist that can provide some definitive dates? 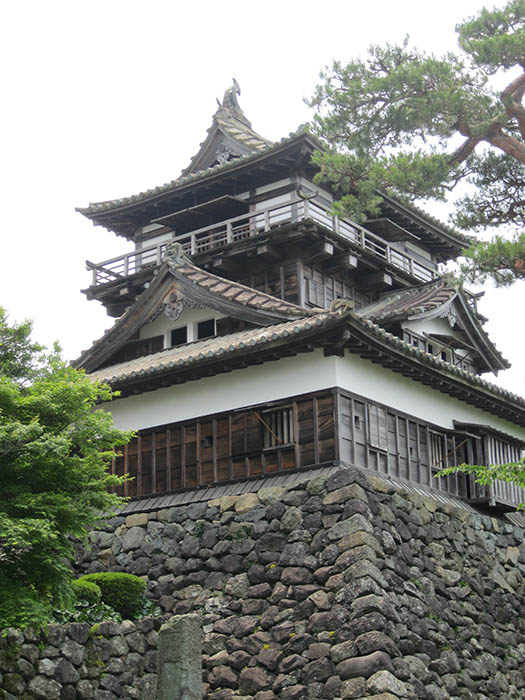 In June my daughter and I visited Maruoka Castle in Fukui Prefecture. It is said to have the oldest donjon (tenshu) in Japan. What I really liked about Maruoka Castle were the many stairs leading to the entrance; then inside, I liked climbing the steep ladder, even though I am not particularly agile. 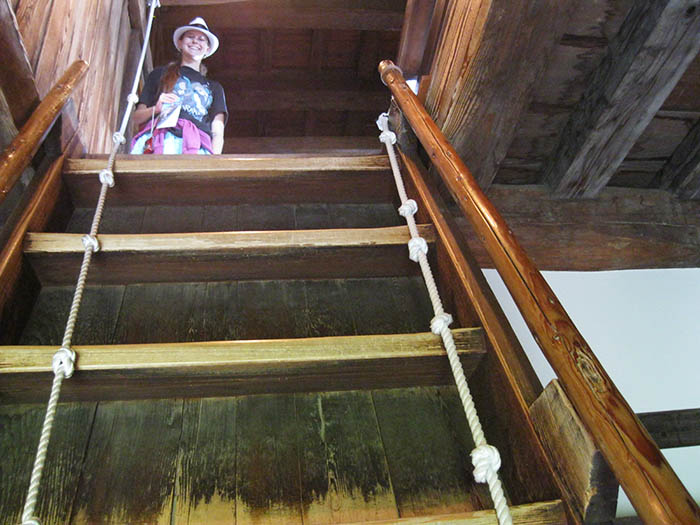 Stairs inside the keep

These features made me feel that my experience was more authentic, as the samurai may have hoisted themselves upward too. In addition, it's just a lot more fun than taking an escalator such as in Osaka Castle. I tried to imagine living in Maruoka Castle, but the guide explained that the lord and his family had lived in the manor below. Maruoka Castle was used for defensive purposes. Before we left the castle grounds we bought ice cream cones, of course. This time it was rice-flavored and topped with a sprinkle of salt. So good! 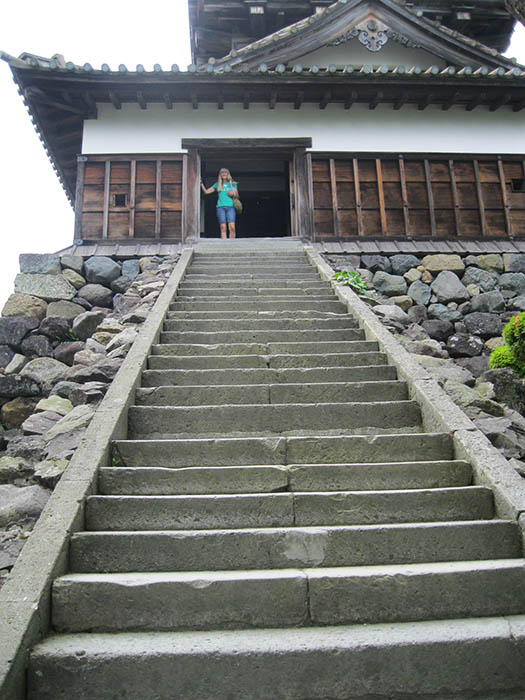 I think when it comes to visiting castles it depends on your point of view. Maruoka Castle was small but I liked and appreciated it as it was, whether or not it had an official designation. It is enriching to see all kinds of castles. You never know what awaits!

Maruoka Castle is about 13 km from JR Fukui Station. Walking to the castle from the station would take about two hours and a half, so a bus is recommended. (If you really want to walk there, you could go to Maruoka Station on the Hokuriku Main Line, and walk the 4km west from there to the castle, which would take you about 50 minutes. But if you go by bus, the best station to catch the bus from is Fukui Station.) Go to the bus terminal out the West Exit of Fukui Station. From bus terminal No.1, take a Keifuku Bus running the "Kenritsu Byoin Maruoka" route or the "Ohwada Maruoka Byoin" route, heading for Maruoka-Joh ("Maruoka Castle"). There are two such buses per hour, so, one or the other leaves about every half hour. With most of these buses, you board at the back of the bus and exit from the front. The bus ride from the station to the castle generally takes just over 40 minutes. Get off at "Maruoka-joh" bus stop. Once you get off the bus you will see the Ippitsu Keijo Chaya tea house. The castle is behind it. Guide Books on Tokyo & Japan Keywords Japan Castles Fukui Nagoya Japanese Castles