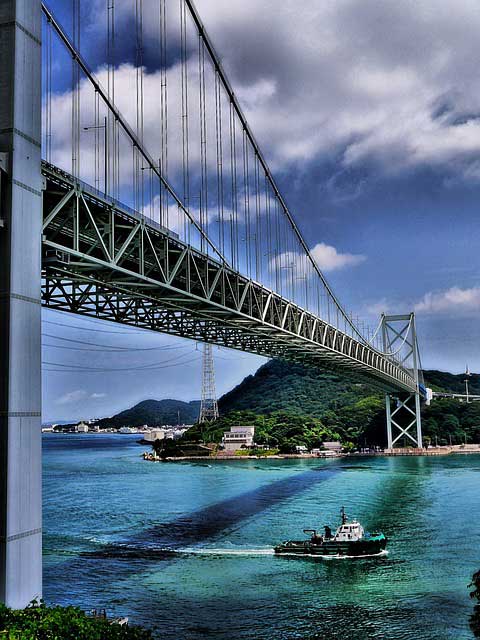 Shimonoseki is strategically located on the southern tip of Honshu separated from the city of Kitakyushu in Kyushu by the narrow Kanmon Strait. Shimonoseki, population approximately 280,000, is a major fishing port famous for its fugu (blowfish) and is an important ferry terminal for boats to Busan in South Korea and over to Kyushu.

Shimonoseki has been the scene of a number of battles throughout its history including the decisive sea Battle of Dan-no-ura in 1185, which resulted in a victory for the Minamoto over the Taira clan and paved the way for the establishment of the Kamakura shogunate.

In 1863 samurai from the Choshu clan based in nearby Hagi closed the Kanmon Straits to foreign shipping leading to an international expedition of British, Dutch, French and US gunboats to reopen them. 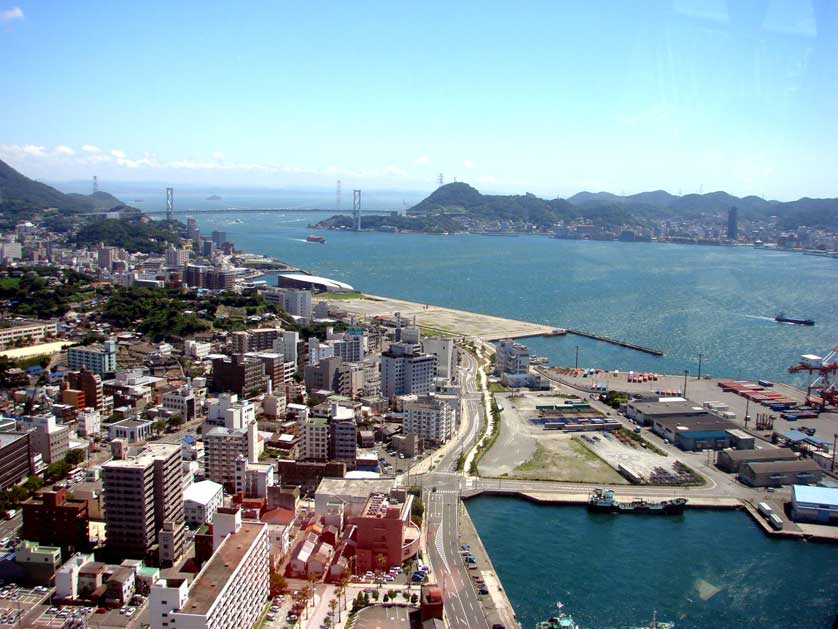 View of Shimonoseki Harbor - the gateway to Kyushu from Honshu

Shimonoseki's beautiful natural location and the spectacular Kanmon Bridge over to Kyushu are best seen from the top of the 268m Hinoyama, about 5km northeast from JR Shimonoseki Station. Either hike to the summit or take the ropeway. Near the Mimosusogawa bus stop is a memorial to the Dan-no-ura battle.

Back in town near the bus and train station and behind the International Ferry Terminal is Sea Mall & Daimaru Department Store. You can easily see the 153 meter-tall Kaikyo Yume Tower, the tallest tower in western Honshu, from here, which also offers superb views of the harbor. Open daily, all year round, entrance is 600 yen for adults, 300 yen for children.

Continuing along Route 9 is the Karato Ichiba Fish Market, where visitors can sample a bewildering array of seafood including whale in one of the numerous whale meat restaurants in the area, if you are so inclined. The market, however, is dominated by fugu ( puffer fish) - Shimonoseki is the undisputed capital of fugu with 80% of all fugu in Japan passing through here. There are buses from Shimonoseki bus station if you don't care for the walk. 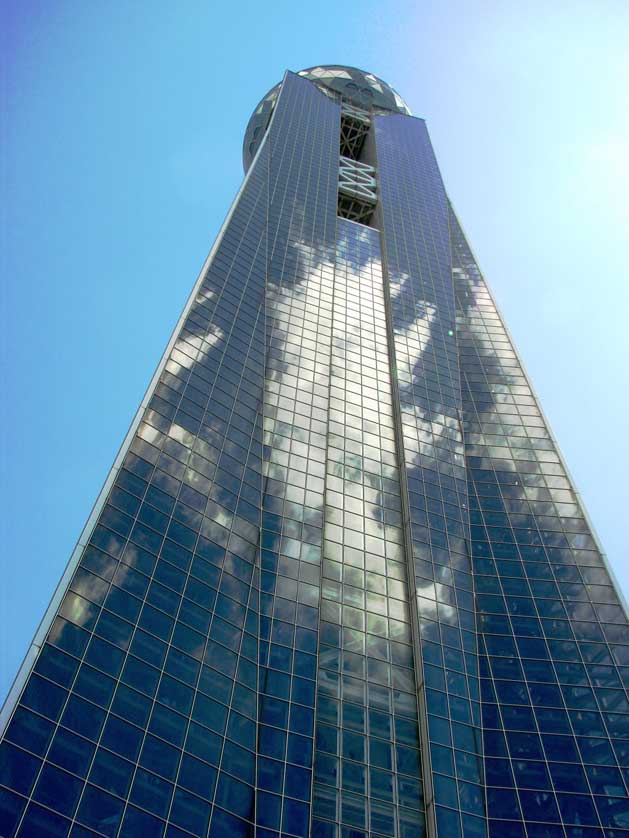 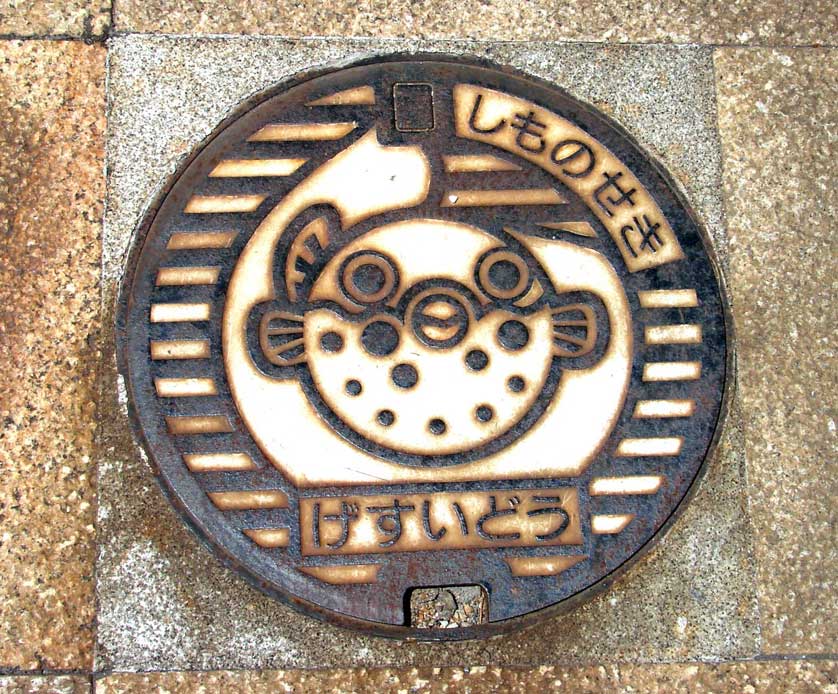 Right next door to Karato Fish Market is the Kaikyo-kan Aquarium (Tel: 0832 28 1100) with dolphin and sea lion shows, penguins and vast numbers of fish on display including 100 different varieties of fugu.

The Meiji-era Former British Consulate Building (Tel: 0832 31 1238) dating from 1906 has been preserved and has a small museum inside. Admission is free.

Akama Jingu further along Route 9 towards the Kanmon Bridge is dedicated to the defeated Taira clan and the eight-year-old Emperor Antoku who drowned at the Battle of Dan-no-ura, supposedly when one of his carers jumped with him into the sea to avoid him being taken prisoner.

Another legend associated with Akama Jingu, which was actually a Buddhist temple until the Meiji era, is that of Hoichi the Earless, a ghostly tale known by many through its inclusion in Lafcadio Hearn's Kwaidan.

The story is set in the cemetery of Amida-ji and there is a shrine and statue of Hoichi to the left of the main shrine. The Sentei Festival is held here in the first week of May, and includes a procession of courtesans to commemorate the Taira women who became prostitutes in order to pay for their dead relatives funeral rites.

The Kanmon Pedestrian Tunnel runs under the Kanmon Bridge and allows travelers to walk from Honshu to Kyushu.

In 1973 the two islands became connected by the Kanmonkyo Bridge, which carries traffic across its central span of 712 meters, and not far away is the Kanmon Railway Tunnel, the first undersea tunnel in Japan.

Fukutoku Inari Jinja is a pleasant shrine with spectacular sea views, located just off Route 191 in Yamaguchi Prefecture, a little north of Shimonoseki, in the village of Toyoura. 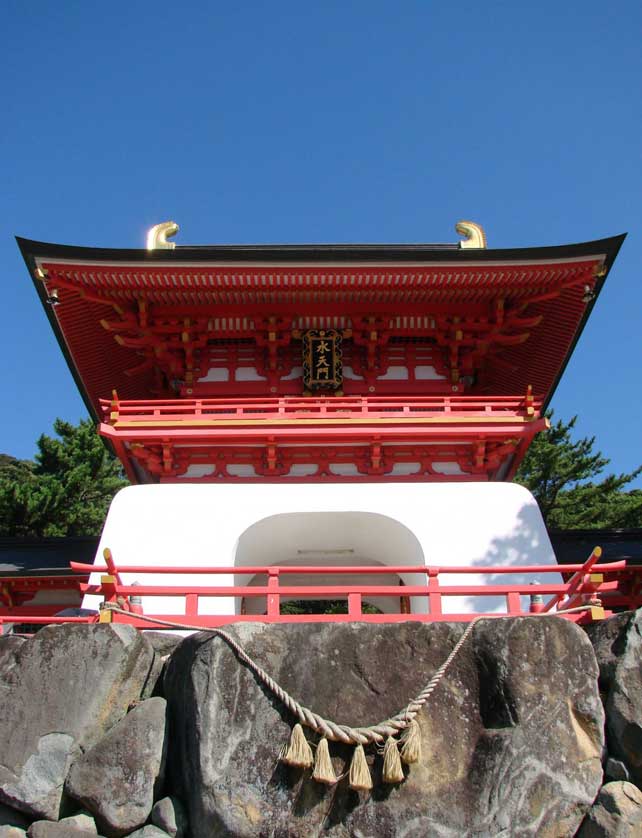 Akama Jingu is dedicated to the defeated Taira clan 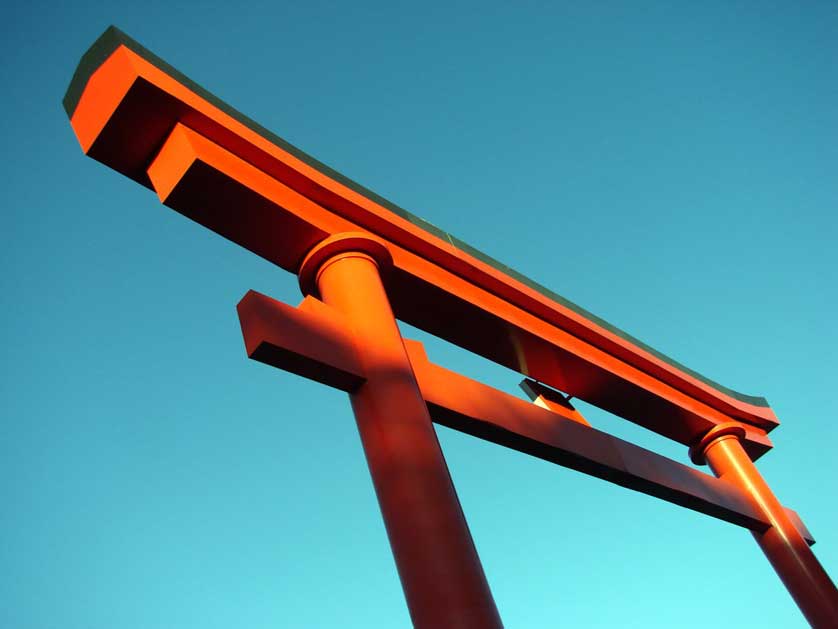 Just 5 km along Route 9 from the Kanmon Bridge is the pretty town of Chofu, a small castle town of the Mori clan. Chofu's attractions include the lovely Chofu-teien garden (Tel: 0832 45 4131) and an area of samurai houses, some of which are open to visitors including the Chofu Mori Residence, the mansion of the last lord of the Chofu domain (han). The house was not completed until 1903, and has two nice gardens.

Strategically located at the narrowest point of the Kanmon Straits that separate the tip of Kyushu from Shimonoseki on the main island of Honshu, Mojiko - Moji Port - developed into a major international and domestic port at the end of the 19th century.

Since the opening of a modern, new port, the area around the old port has been turned into a tourist attraction with the slogan Mojiko Retro. Moji was one of five towns and cities that merged in 1963 to become Kitakyushu-shi (Kitakyushu city): Moji, Kokura, Tobata, Yahata with its main attraction of Space World and Wakamatsu. 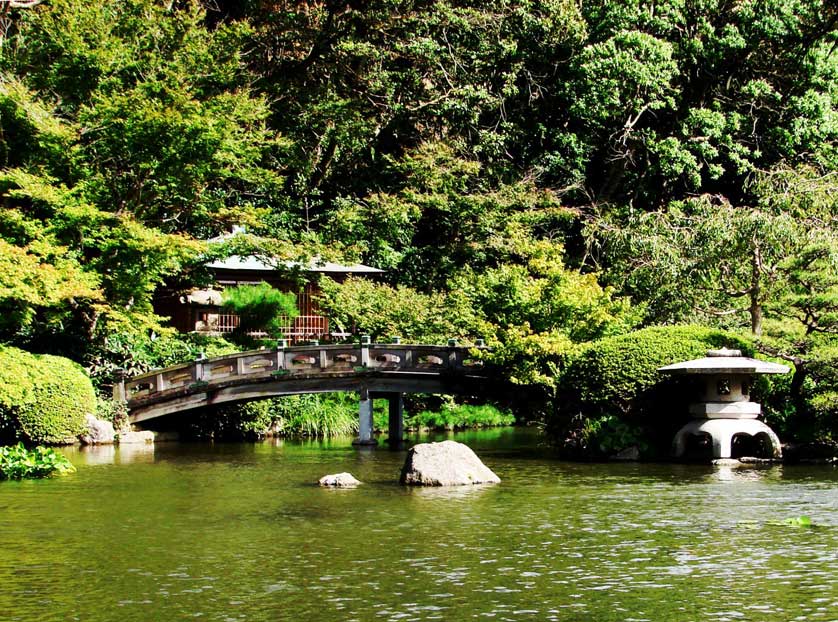 There are trains from Shimonoseki to Higashi-Hagi Station (3 hours).

Shimonoseki is connected by highway bus to both Osaka and Tokyo.

There are ferries across the Kanmon Straits from the Karato area to Moji-ko in Kyushu with Kanmon Kisen (Tel: 0832 22 1488; 270 yen; 5 minutes). The company also offers short day and night cruises.

Kanmon Kaikyo (Tel: 0832 66 6371) operates boats from Hikoshima Arata to Kokura (200 yen; 13 minutes). From Shin-moji in Kita-Kyushu there are boats to Kobe, Osaka, Tokyo and Matsuyama on Shikoku.

Daily ferries to Busan in South Korea sail from the International Ferry Terminal, a 5 minute walk from JR Shimonoseki Station. Kampu Ferry (Tel: 0832 233 1715) operates the service with the cheapest one-way fare in 2nd class presently 7,200 yen. Boats leave at 7 pm from Shimonoseki arriving in Busan at 8 am the next morning.

Orient Ferry (Tel: 0832 32 9677) has sailings from Shimonoseki to Qingdao in China.
Boats leave at noon from Shimonoseki arriving in Qingdao at 4pm the following day. Sailings are usually on Wednesdays and Saturdays.

Buses run from the bus station to Chofu via Akama Jingu and Hinoyama. 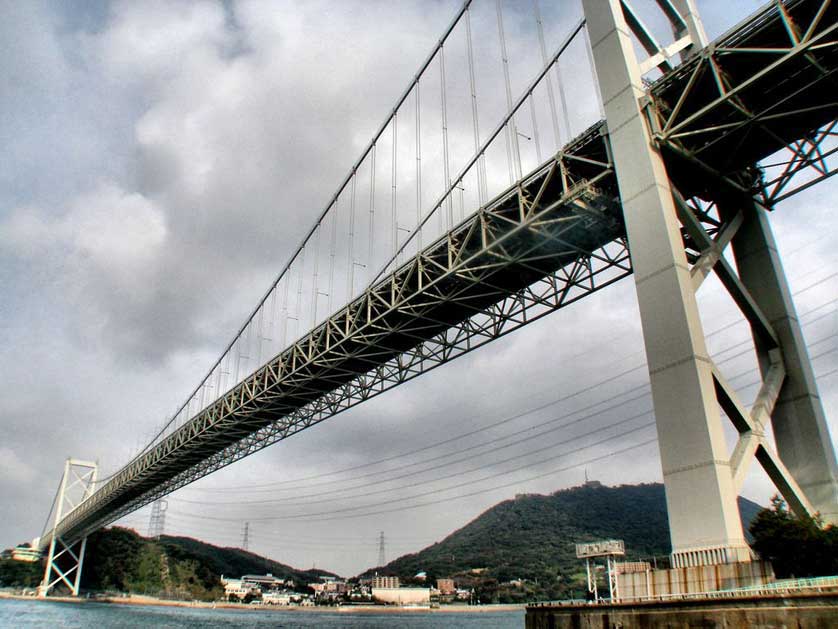 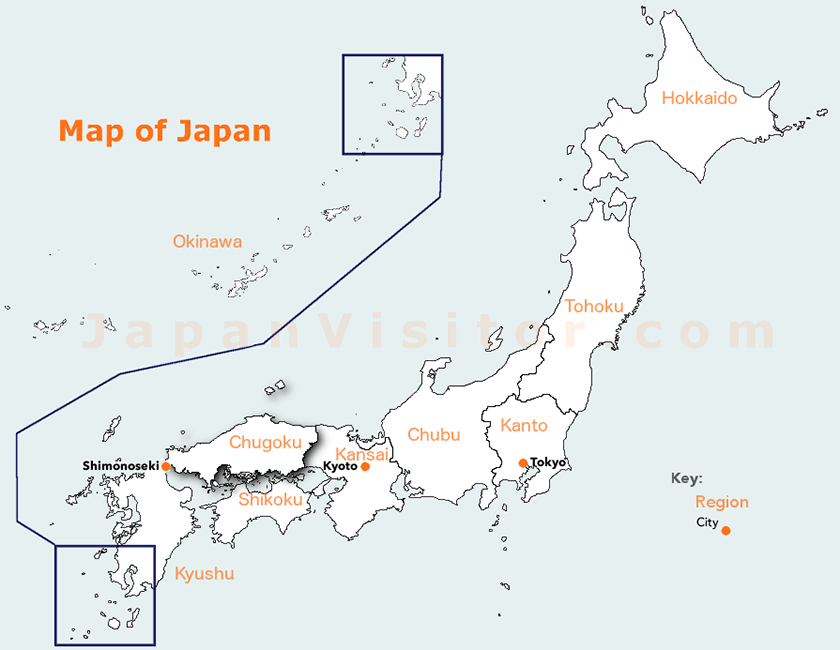 Shimonoseki: read a guide to Shimonoseki at the southern tip of Honshu, famous for its fugu and ferries to Korea.