Kamakura in Kanagawa Prefecture, south west of Tokyo was the center of political power in Japan in the 12th and 13th centuries, known as the Kamakura period of Japanese history.

Like the former capitals of Nara and Kyoto, the city of Kamakura has a rich heritage of historic temples and shrines.

Several of Kamakura's major temples are of the Zen sect of Japanese Buddhism, reflecting the warrior ethos of the ruling samurai of the Kamakura Period. Zen became the predominant religion of the warrior caste particularly after the defeat of the Mongol invaders in 1274 and 1281.

The following is a list of the major temples and shrines in Kamakura, with photographs and explanations. 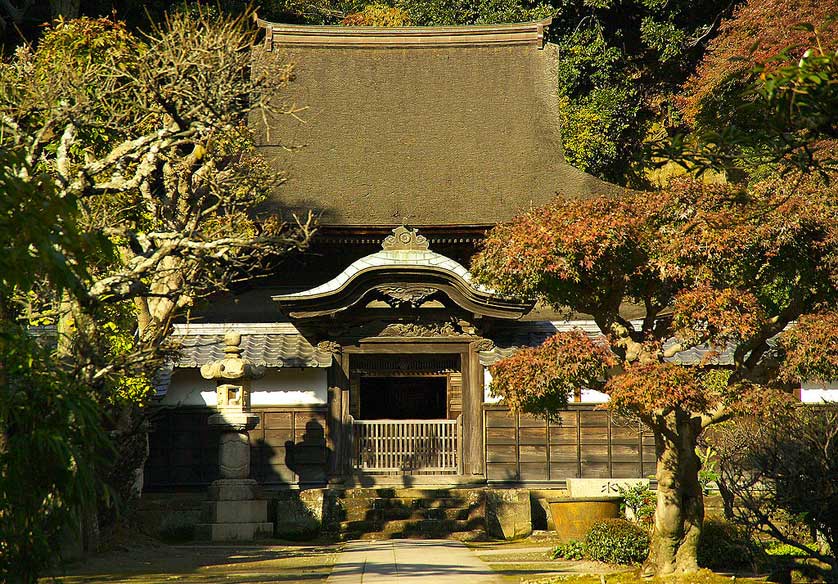 The Shariden, a National Treasure, contains a tooth of the Buddha, Engakuji Temple, Kamakura, Kanagawa Prefecture

Engakuji Temple is the head of a branch school of the Rinzai sect of Zen Buddhism and was founded in 1282 for the repose of the souls (Japanese, Korean and Mongolian) of those killed in the attempted invasions of Japan by Kublai Khan, which took place on Kyushu in 1274 and 1281. The Shari-den, or Shrine of the Sacred Tooth of the Buddha, houses the relic gifted to the Shogun Sanetomo Minamoto from China, which is said to be a tooth of the historical Buddha, Shakyamuni. Built in the 13th century Kara (i.e. Chinese) style, the building is a National Treasure. 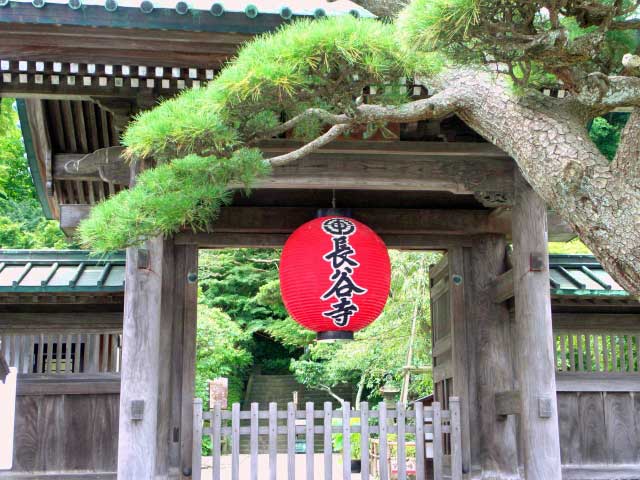 Hasedera Temple is famous for having one of the largest wooden statues in Japan, that of Kannon, the Goddess of Mercy. Today, Hasedera belongs to the Jodo sect of Japanese Buddhism, after its initial foundation as a Tendai sect temple. According to legend, Hasedera Temple was founded in 736. This occurred, so the story goes, after the monk Tokudo Shonin found a huge camphor tree in the forests of Nara in 721. Read the full story of Hasedera Temple. 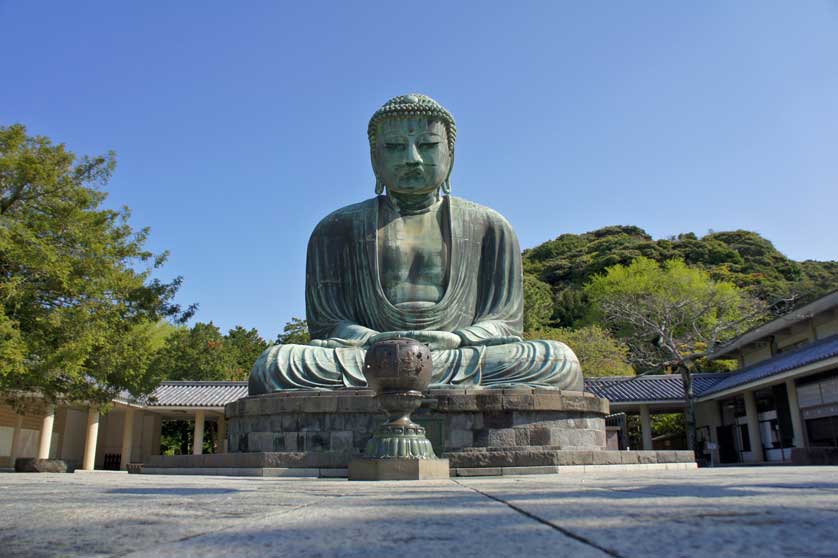 Kotoku-in Temple is the home of the "Daibutsu" or "Great Buddha", an 11.4 meter (37 ft), 121 ton copper statue of the Buddha, constructed in 1252 at the height of Hojo clan power. The Hojo were the ruling family and major power brokers during the Kamakura shogunate period of Japanese history. While not as big as the Buddha in Todaiji Temple, Nara, that inspired it, the Kamakura Great Buddha is considered superior in terms of artistry.
Today, Kotoku-in belongs to the Jodo sect of Japanese Buddhism. 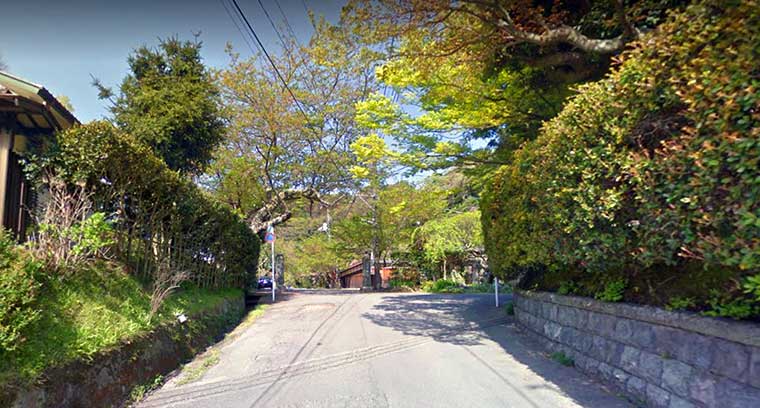 Kosokuji Temple (literally 'light gauging temple') is associated with the 13th century priest Nichiren, the fierce asserter of the Lotus Sutra against all other forms of Buddhism during the Kamakura shogunate period of Japanese history. Kosokuji began life as an ordinary residence until the owner, Mitsunori Yadoya, was landed with five disciples of Nichiren, who had been exiled to Sado Island off the coast of what is now Niigata Prefecture. The Kamakura shogunate commanded Mitsunori Yadoya to keep them securely confined in a dungeon on his property (still visible behind the cemetery at the north of the temple grounds). One of men to be kept in detention was Nichiren's chief disciple, Nichiro (1243-1320). 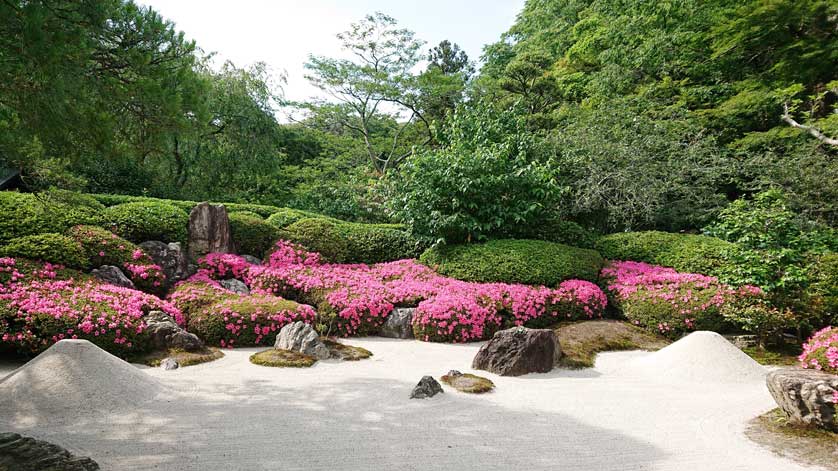 Meigetsu-in Temple ('Bright Moon Temple') belongs to the Kenchoji School of Rinzai Zen. It is most famous for its flower gardens. The main temple area features an abundance of mostly blue hydrangea (ajisai in Japanese), blooming in June and July. The Weathered Stone Staircase leading up to an inner gate of the temple, flanked by blue hydrangea to the left and right, is the signature image of this beautiful temple. 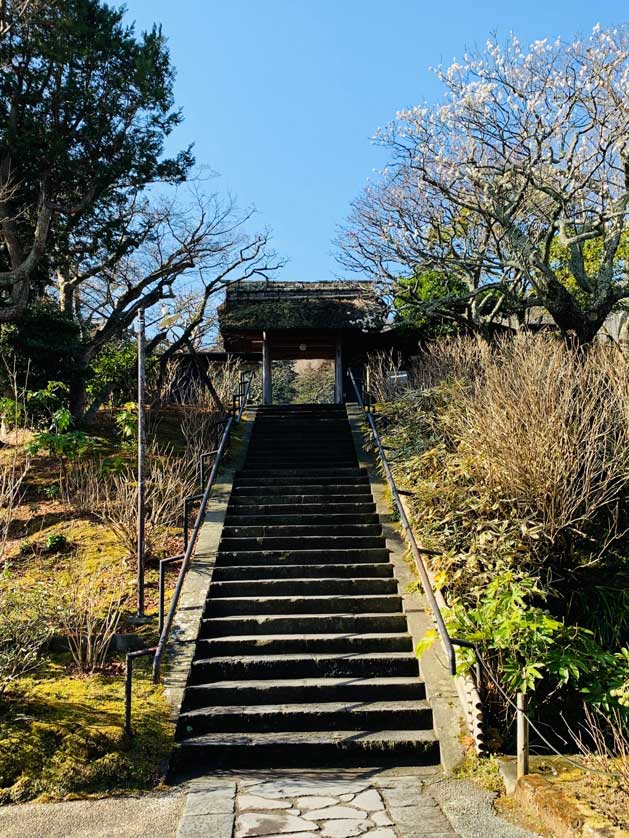 Tokeiji Temple is a branch temple of nearby Engakuji Temple. Like Engakuji, Tokeiji is a Rinzai sect temple of Zen Buddhism and was founded in 1285 by the widow of Hojo Tokimune. Tokeiji became famous as a refuge for women escaping abusive husbands and mothers-in-law. The wives could claim a divorce by staying at the nunnery for a period of three years. Hence the name "Divorce Temple" which Tokeiji is sometimes referred to as. Around 2,000 women are thought to have claimed refuge in Tokeiji until its rights were revoked in 1873 during the Meiji Period. 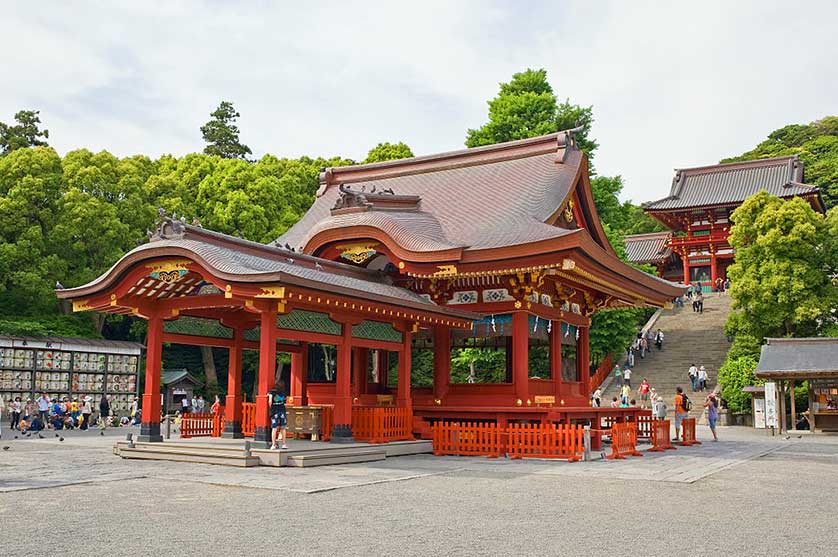 Tsurugaoka Hachimangu is the most important shrine in Kamakura. Its extensive grounds contain a number of sub-shrines and several museums. Tsurugaoka Hachimangu can be approached along the picturesque, cherry-tree lined Wakamiya-Oji leading from Yuigahama Beach south to the shrine. Tsurugaoka Hachimangu was founded in 1063 on another site by Yoriyoshi Minamoto (998-1075), dedicated to the Minamoto clan's deity, Hachiman, the kami of samurai and war. The shrine was moved to its current location by his descendant, the shogun Yoritomo in 1191, at the beginning of the Kamakura Period of Japanese history to celebrate his 1180 victory over the rival Taira clan.

Other Temples in Kamakura

Other temples of note in Kamakura include Zuisenji with a 14th century Zen garden and Sugimoto-dera, which is Kamakura's oldest temple, founded in 734. Sugimoto-dera is known for its ancient statues of Juichimen Kannon, the Eleven-Faced Goddess of Mercy. Hokokuji Temple is famous for its evergreen bamboo grove and has earned the sobriquet of the "Bamboo Temple."

Kamakura has a nice range of accommodation including hotels and guest houses. Some recommendations include the Kamakura Park Hotel with ocean views of Sagami Bay, the traditional Kamejikan Guesthouse with tatami-mat rooms and Pension Green Grass with Western-style rooms near Wadazuka Station. See here for a full list of hotels in Kamakura.