The Buke-yashiki district of lower and middle samurai houses in the Teppo-cho area of Shimabara in Nagasaki Prefecture is a short walk north west of Shimabara Castle.

The Buke-yashiki district of lower and middle samurai houses in the Teppo-cho area of Shimabara in Nagasaki Prefecture is a short walk north west of Shimabara Castle. 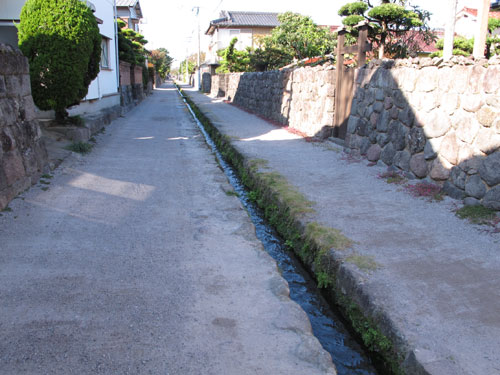 A small spring water canal, that served for the daily water needs of the houses, runs down the center of the street. A number of the wooden samurai residences and gardens have been preserved here including the Torita, Shinozuka and Yamamoto homes. 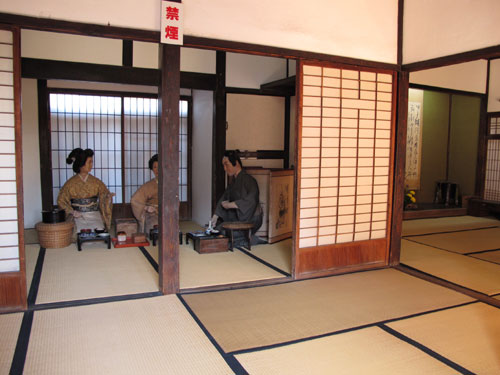 The homes are unoccupied and are free to enter. Some of the tatami-floored rooms have mannequins in period dress recreating scenes from samurai life in the Edo Period. 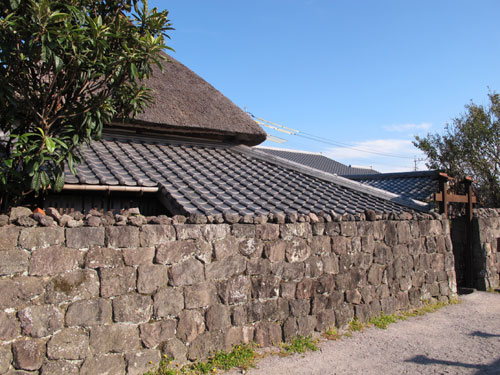 The properties measure about 300 square meters and were occupied by mid-ranking samurai who served as clerks and administrators to the feudal lord (Matsudaira). They received a stipend of between 7 and 17 koku of rice a year, depending on their rank.

Each property was planted with loquat, persimmon and orange trees to provide the family with fresh fruit.

The high, stone walls for defense are a feature of the houses and several Japanese castle towns in general.

JR LEX Kamome trains from Fukuoka on the Kagoshima Line go to JR Isahaya Station (1 hours, 50 mins) and then change for a local train to Shimabara (70 mins).

Shimabara Station is on the privately owned Shimabara Line which runs from Isahaya on the JR Nagasaki and Omura lines. The Shimabara Line opened in 1911 and originally ran all the way down to Kazusa, but the southern section from Shimabara Port to Kazusa was closed in 2008.

Nagasaki Airport is the most convenient airport for arrival in Shimabara. It has flights to Tokyo, Osaka and Nagoya.

Kumamoto Airport has direct flights to Tokyo, Osaka, Naha (Okinawa Prefecture) and other cities in Japan. The airport is about 50 minutes from downtown Kumamoto by regular bus.