Tatami: read about the production and use of Japanese tatami mats made from igusa reeds. 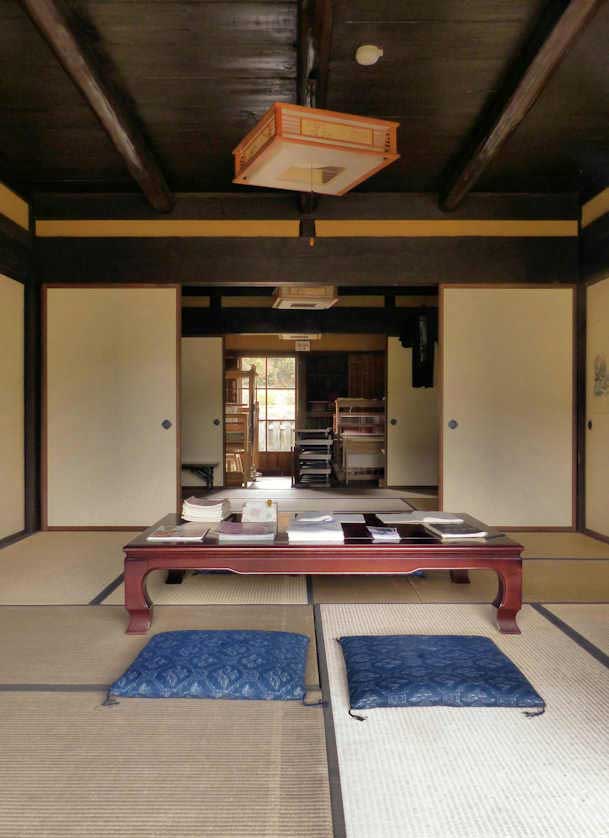 The tawny colour of tatami flooring is gentle on the eye, hard-wearing, and comfortable on the feet and knees. Here in a typical Washitsu (Japanese room) at the Yokota Folklore Museum with sliding doors, sliding screens and a glimpse of the garden beyond

Few scents conjure up "Japan" so readily as that prevailing when one first slides open the doors to a tatami-floored room. That scent has hints of warm summer days and cool autumn nights, and something too of a sweet-scented drying hay-crop about it.

New tatami have the stronger fragrance of their finely woven green rush covering. Old tatami have that lingering scent of hay, which is suited to their now tawny yellow appearance, combined with a slight, but pleasant mustiness.

Where traditional Japanese houses of the last two centuries or so were entirely floored with tatami (before then floors were wooden boards, or earthen, depending on one's class), it is more common these days to have just one token Japanese-style room where tatami prevail. The very newest of apartments even lack these.

Tatami are rigid board-like mats, used for the flooring of traditional rooms in Japan, twice as long as they are wide; they measure not quite two metres in length by just less than one metre in width (but sizes vary from region to region of Japan and have changed over the centuries).

Enter a tatami floored room and all that is noticeable, apart from the delightful scent, is the fine surface. This is a woven covering for the board, made from a rush with the distinction of having the shortest name possible in Japanese - a single syllable "i", though it is known more frequently by the longer version of its name 'i-gusa' ('i'-grass). Travel in Kyushu and Okinawa and you will see fields of this rush being grown just for the tatami trade.

When laid as flooring, the heart of the board is invisible, but seen from the side, or during construction, this part measures some five to six centimetres in depth and while traditionally made of compressed straw or wood chips, that is increasingly frequently replaced with a layer of polystyrene. 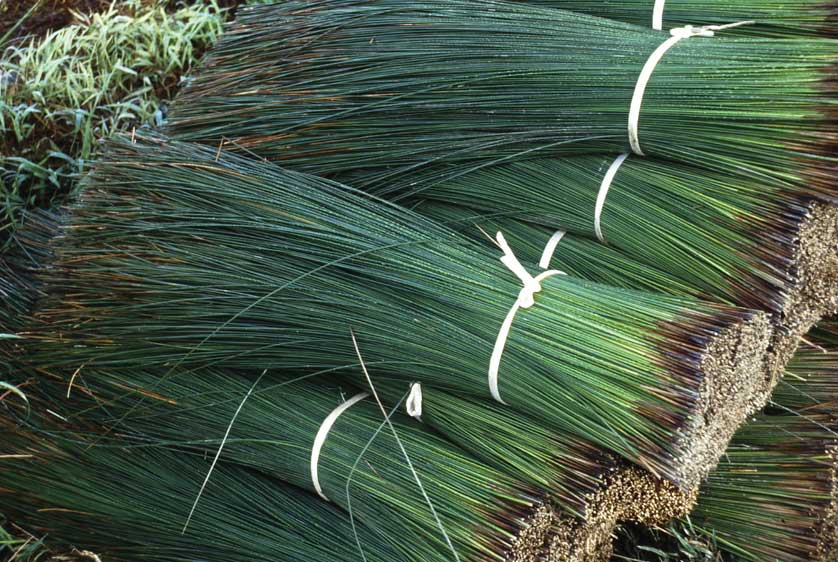 Bundles of Igusa (rushes) grown in Okinawa and Kyushu, will be dried and woven to form the wonderfully scented surface of tatami 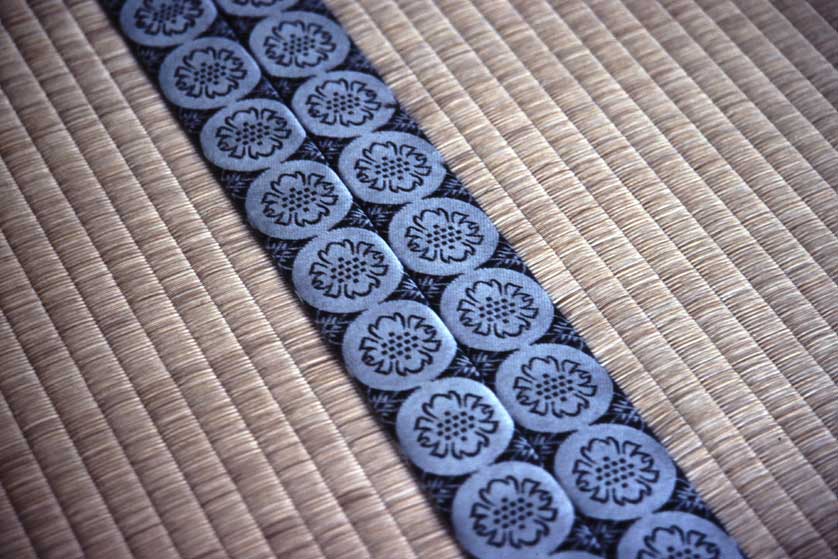 The rush covering is stretched over the board thus providing an attractive and durable surface over the floor insulation provided by the board itself. The side edges, but not the ends, of tatami are decorated with a coloured brocade border or a plain border, known as heri, which in the past denoted the rank of those using the room.

Tatami rooms do not have a designated purpose, and can serve at night as a bedroom, during the day as a workroom, and in the mornings and evenings as a dining room and a room for relaxation.

Tatami rooms are especially important for the practice of traditional Japanese arts such as ikebana and tea ceremony and even in fully westernized houses and apartments, treasured artworks or pieces of pottery may be raised and displayed on small boards resembling a miniature tatami, with the same woven surface and a coloured border.

Early tatami were not fixed in place; they were thin mats capable of being folded or piled up when not in use. Wooden floors prevailed in upper class homes and tatami were provided as an additional layer, for the seating of aristocratic visitors. As time passed so the use of tatami spread further, first to flooring small rooms, and then to ever larger rooms, and whole houses, and slowly down the social classes until they reached the houses of the working classes in the late 17th century during the Edo Period. 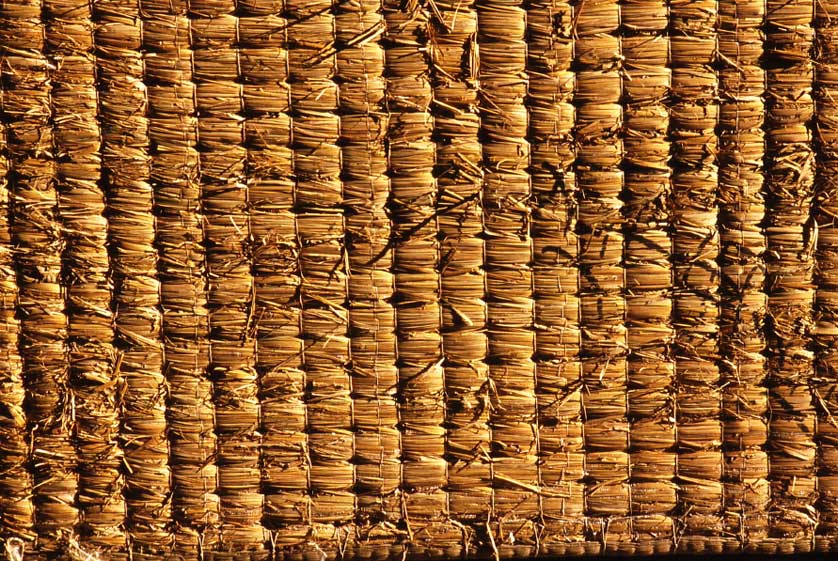 The underside of tatami reveals its construction from rough rice straw

Tatami, like carpets, do not provide everlasting flooring. Periodically, they require replacing, that period depending on how much wear and tear they receive, but they should last for at least ten years. Tatami can be lifted and turned, the woven rush surface switched from one side to the other, after five years or so, and the covering itself can be replaced when worn, without necessitating replacing the entire mat.

Users and viewers take it for granted that tatami have been laid correctly, but there are correct and in-correct ways of doing this, or at least auspicious and less auspicious ways. Wherever they meet the mats should form a T-shape with their edges, and four corners should never come together in a room (the character for four has alternative readings, one of which defines death; it would be very inauspicious to represent that in the floor, just as the room number four, or the hospital ward four, is typically avoided).

Tatami rooms used for sleeping are transformed in the evening by the spreading of futon (mattresses and quilts for sleeping), and again in the morning by their removal. While staying in a minshuku or ryokan, the staff usually lay out futon while the guest is dining, and remove them while they are breakfasting.

Tatami rooms contain a number of classical features. One of these, the Oshiire, is a kind of closet (approximately one tatami length in width and as deep as the width of a tatami) with sliding doors, and usually divided in two by a shelf, which is used for storing futon in during the day. Another classic feature of a tatami room is the tokonoma, or alcove, in which important items are placed - such as ikebana, a favoured piece of pottery, or an artistic or calligraphic scroll, sometimes all three. 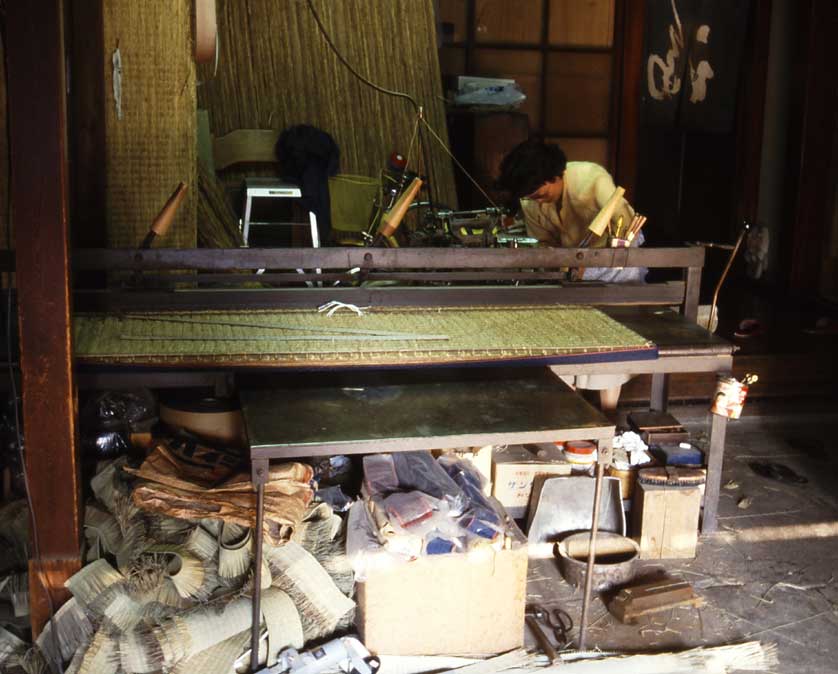 The cluttered workshop of a traditional, small-scale tatami manufacturer