One of my favorite places in Nagasaki is the Siebold Memorial Museum situated in the pleasant hills above Nagasaki Station and the harbor. 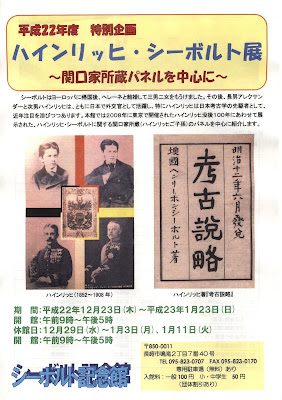 The Siebold Memorial Museum is located on a plot near to where Siebold's former house in the Narutaki district once stood. The museum is dedicated to the life and work of Philipp Franz von Siebold (1796-1866), a German physician and naturalist who came to Japan as part of the Dutch trading house in Dejima, Nagasaki. 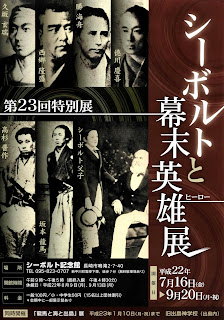 Erected by Nagasaki city, the Siebold Memorial Museum building and entrance are a reproduction of Siebold's own house in Leiden and the Lotz family house in Würzburg, Germany, where he grew up and studied at Würzburg University. Siebold resided in Japan on two separate occasions. He first came to Japan via Batavia (Indonesia) in 1823. Fortunately Siebold was able to escape the harsh confines of Dejima after successfully treating a local shogunate official. Consequently, he set up home nearby the present museum with his common-law Japanese wife Kusumoto Taki. Their only child Oine was later to become the first practicing female doctor in Japan.

Siebold Exhibition at Nagoya City Museum With the permission of the Tokugawa authorities, Siebold set up a school called the Narutaki-juku, which grew into an institute for rangaku ("Dutch Studies"). This was Japan's only window on western technology at the time through the medium of Dutch.

Siebold is most famous in Japan for his extensive studies of Japanese flora and fauna. He and his numerous Japanese assistants and helpers amassed a huge collection of plants and animal specimens. These were later sketched by local and Dutch artists and form part of the many exhibits at the museum. Indeed, the first specimen sent to Europe of the Japanese Giant Salamander was by Siebold.

Expelled back to Europe in 1830 after the so-called "Siebold Incident" when the doctor was found in possession of maps of Japanese territory, an act forbidden at the time, Siebold set up his huge collection in Leiden, Holland, bolstered by more specimens sent from his successor in Nagasaki, Heinrich Bürger. Siebold achieved world fame as a naturalist for his great work Flora Japonica, the first study of Japanese flora. He returned briefly to Japan from 1859-1863 during the Bakumatsu Period but left disillusioned. The events surrounding Siebold's life are loosely interwoven into the novel The Thousand Autumns of Jacob de Zoet by David Mitchell.

The Siebold Memorial Museum in Nagasaki celebrates the life and achievements of the Geman doctor and naturalist.