Akame Shiju-hataki: read a guide to the beautiful waterfalls known as Akame Shijuhataki in Mie Prefecture in central Japan. 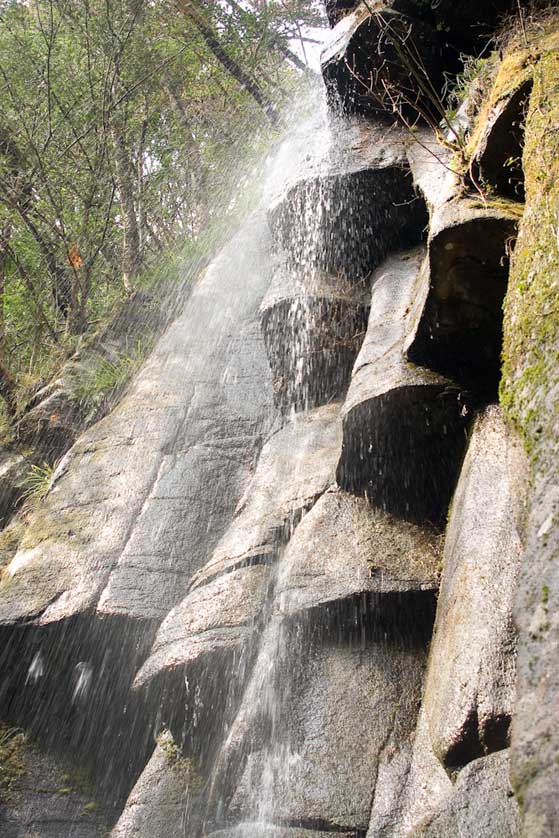 Romantic! If I had to sum up a visit to Akame Shiju-hataki in a single word, that would be it. Akame Shiju-hataki is one of what are traditionally considered the "Top 48" waterfall areas in Japan (shijuha meaning "48"), and is one place in Japan where nature has been left unspoiled. In the middle of it, you can easily appreciate why Shinto philosophy attributes a divine spirit to such places and even to the rocks, trees, winds, and waters they comprise.

Akame Shiju-hataki, in Mie Prefecture, is easily accessible from Osaka, Nara, and Nagoya cities. From the Akameguchi Station on the Kintetsu Osaka Line, you can (usually) take a bus for ten minutes that will bring you to the entrance.

The bus, however, runs infrequently and, on my last visit, a typhoon had washed out a section of the road suspending bus service altogether for repairs. I had no choice but to walk.

Not everyone would find the idea of a five hour hike seductive, but if you are up for it, I highly recommend making the trip from the train station and back on foot. Once out of the village - a farming community of wide fields surrounding many traditional style residences - you will be passing through cedar forests and orchards of ornamental plum trees, with a brisk river winding along its path below.

After about one hour you will arrive at the salamander museum, housing protected species, great and small, and pay the entrance fee. Once through the museum, your path will join the one along the river.

Akame Shijuhataki is a 4.2 kilometer mountain trail hugging a tributary of the Nabari River in Mie Prefecture that runs through the Takigawa Valley. Along its course, the waters tumble over numerous rock formations to create the kind of sights that only Nature can. The sounds of rushing water are ubiquitous. Sunlight is diffused through a canopy of foliage. 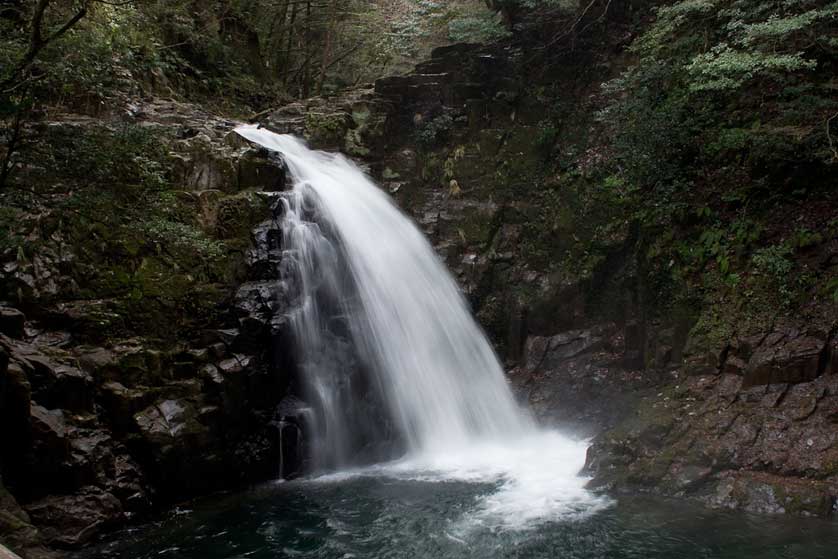 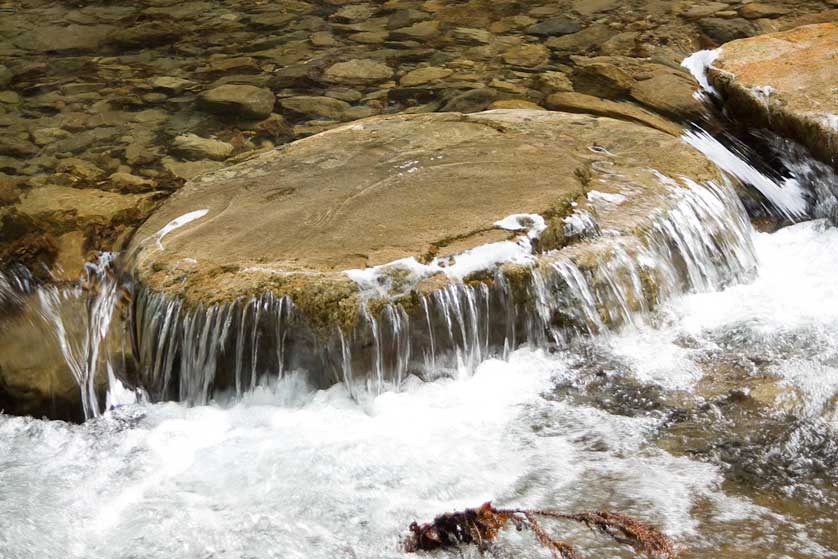 There are five falls that have received particular notice through the centuries. Generally they are the ones where the river narrows to a stream that plunges from a considerable height into a wide pool. If you visit in drier times, these are elegant fountains, dividing into multiple fingers as they find their ways down fracted rock faces.

After a good rainfall, they will gush and throw up a cool mist as they roil the water below, and the cliffs and slopes beside the path will come alive with little streams that spill over the rocks, often creating little, local rain showers on their own.

The way is not completely bereft of civilization. There are a couple of rest stops. The most well-appointed is at the foot of senju-daki, "Thousand Hands Fall". In the summer months you can sit there in the shade, watch and listen to the water running home, while being refreshed with a bowl of udon, a beer, or a cup of tea.

At the start of the course, just before Fudo-daki, first among the most acclaimed falls, you will encounter a stone carving of an ox with red eyes, and from this hangs a tale.

It is difficult to separate the traditions of Shintoism and Buddhism that run through Japanese history, especially because so much of the lives of their very real leaders and shapers are remembered only in fanciful legends that tend to blend the two. En-no-Ozunu is one such figure.

He was an ascetic who came to the mountains to practice his devotions. It is said he was so successful he gained the ability to fly, and to control human minds and supernatural spirits. There are some who claim him as the originator or the Ninja disciplines of spy craft and assassination. 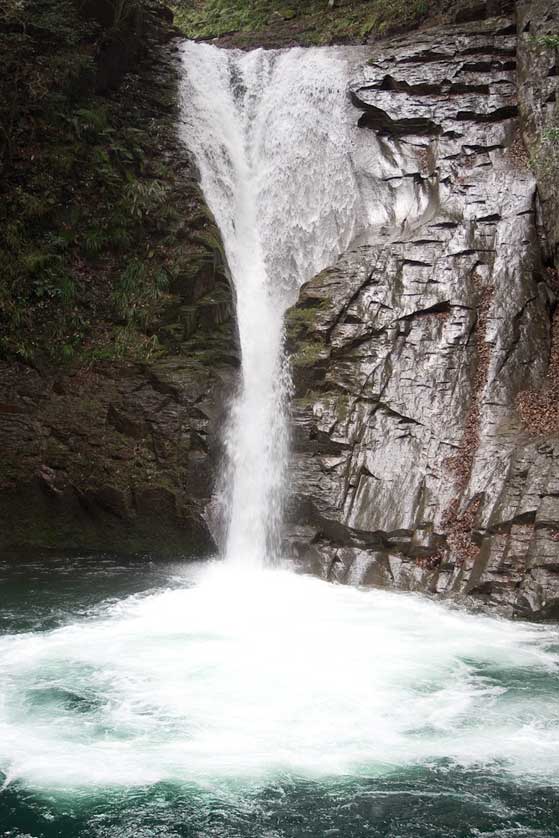 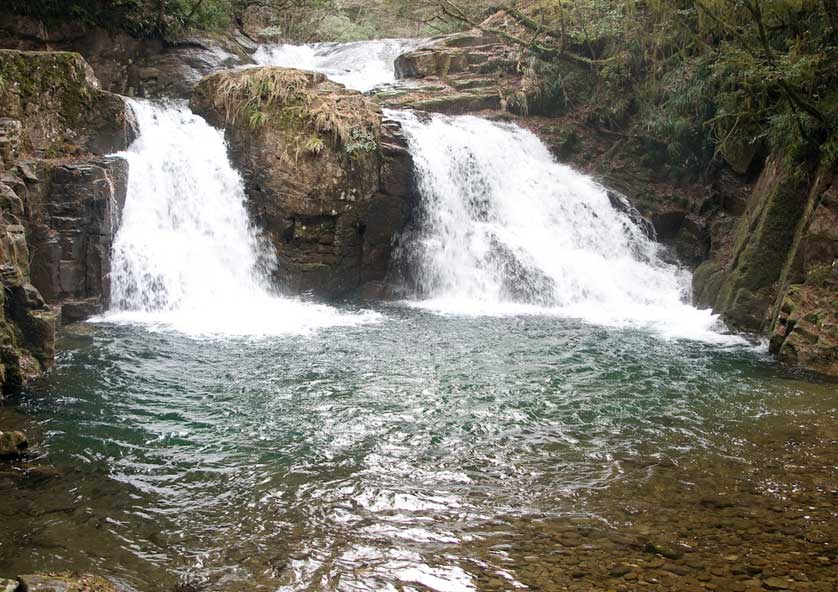 It is said that En-no-Ozunu spent some time training himself in the Taki-gawa Valley where he had a vision of Fudo-o-myo riding an ox with red eyes. Fudo-o-myo, or Acala, in Sanskrit, is one of the five manifestations of Buddha central to the tradition of esoteric Buddhism, still popular in Japan, of which En-no-Ozunu was surely a part.

That legend is the origin of the name of this hiking course, which was cleared and constructed at the end of the nineteenth century, and the name of the waterfall you can see from the bridge just beyond the ox statue. Akame means "red eyes" referring to the eyes of the ox in En-no-Ozunu's vision and Fudo-daki takes its name from the rider, whose attribute is the destroyer of passions along the path to Buddha nature.

A less publicised site is in an indentation of black rock just above the Thousand Hands Fall. The fall was probably named for the thousand handed Kannon, another manifestation of Buddha commonly known in the West as the Goddess of Mercy. But this niche has been made into a shrine for a dragon spirit.

Dragons in Japan tend to sit more on the Shinto side of the fence and there is a traditional belief that the waters of a winding river embody a dragon spirit. If ever a dragon lived in Taki-gawa, it must be alive and well now, judging from the coins pressed into the walls and the talismans left at the shrine.

The other reputed waterfalls are the Nunobiki-daki, "Cloth Flow Fall", Ninai-daki, "Load Carrying Fall", and the Biwa-daki, "Lute Fall". My personal favorite, though, is the Hinadan-daki, "Doll Staircase Fall".

You may not exit the path from the far end. You must turn around and go back to the entrance at the salamander museum. The round trip takes about three hours. 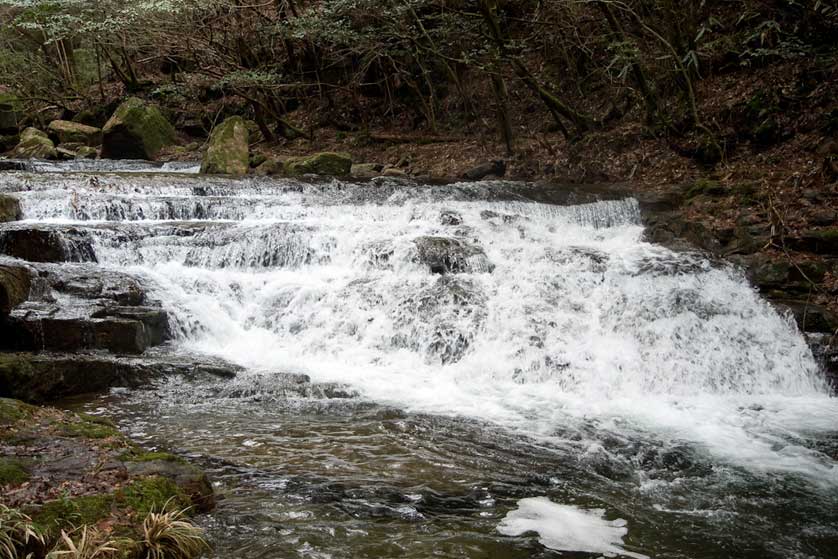 It is obvious that the little gathering of gift shops, restaurants, and lodgings outside the entrance live and breathe by the rhythm of the seasons - tourist seasons, that is. There are large parking lots, filled in summer and in winter, desolate in early spring and late autumn. This means you can have long stretches of the narrow pathway all to yourself or share a beautiful day with visitors of all ages, depending on when you choose to go. 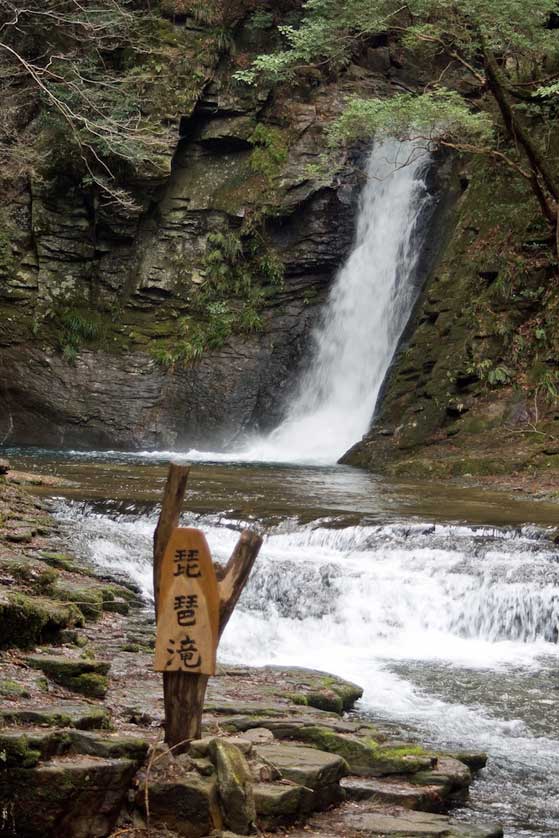 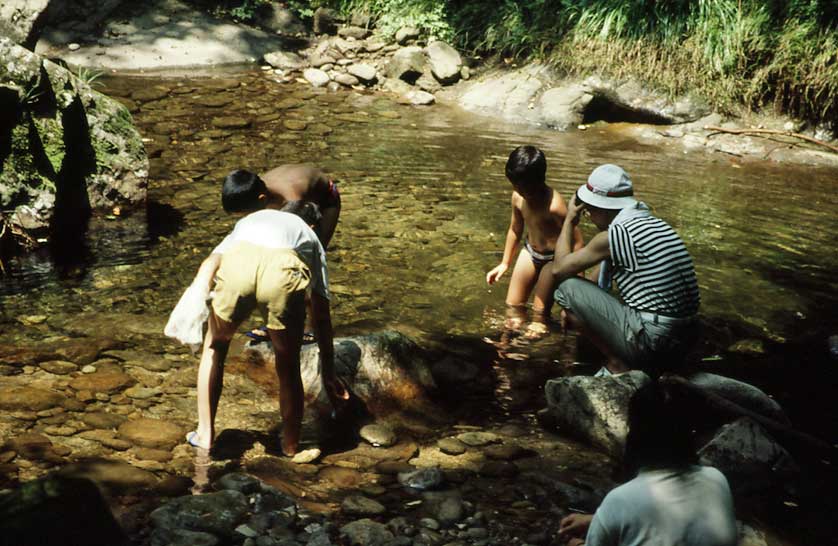