Utsunomiya, the capital of Tochigi Prefecture, is a city of about 520,000 residents in the northern reaches of the Kanto plains, about 100km north of Tokyo.

Utsunomiya is a stop on the Tohoku Shinkansen, it is also served by the JR Tohoku Main Line, directly connecting Utsunomiya with Tokyo's Ueno Station. The JR Nikko Line provides easy access from Utsunomiya to the world heritage temples and shrines of Nikko, about 40km away. 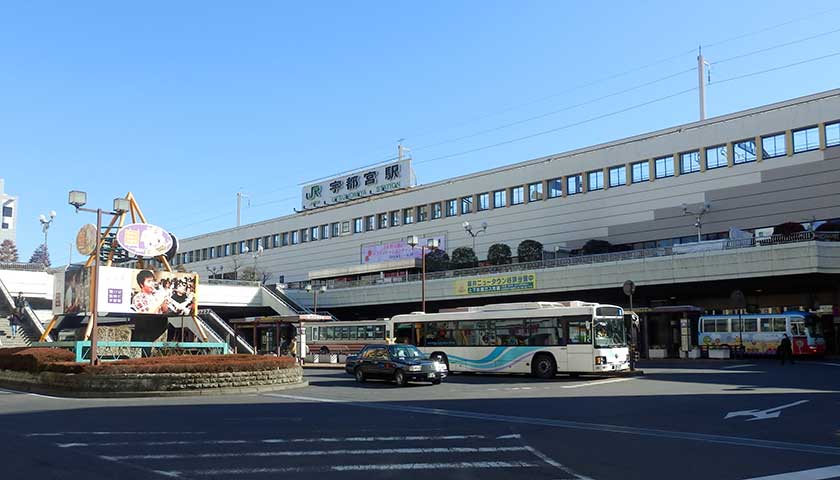 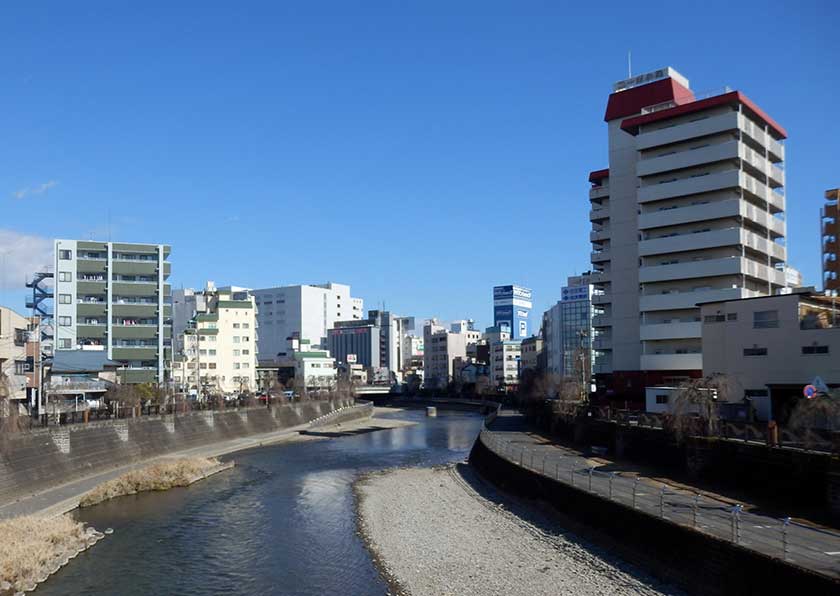 Unlike Nikko, however, Utsunomiya has little to offer in terms of historic buildings and neighborhoods. The city is mostly modern and functional, serving as the administrative, commercial and industrial center of Tochigi Prefecture.

Utsunomiya is home to a few historical buildings but they hardly justify travelling to the city on their own. They are nice to visit though when you have to spend time in the city.

That might be the case, for example, if you head for the bizarre rock formations, Oyaji Temple and historic quarries of the Oya Valley, just west of the city.

The lack of obvious attractions has of course been a concern to the tourism promoters of the city. Looking for any feature that could set Utsunomiya apart from other communities and thus attract visitors, they eventually focused on the local cuisine. On Utsunomiya's uniquely wide variety of gyoza dumplings, to be specific. 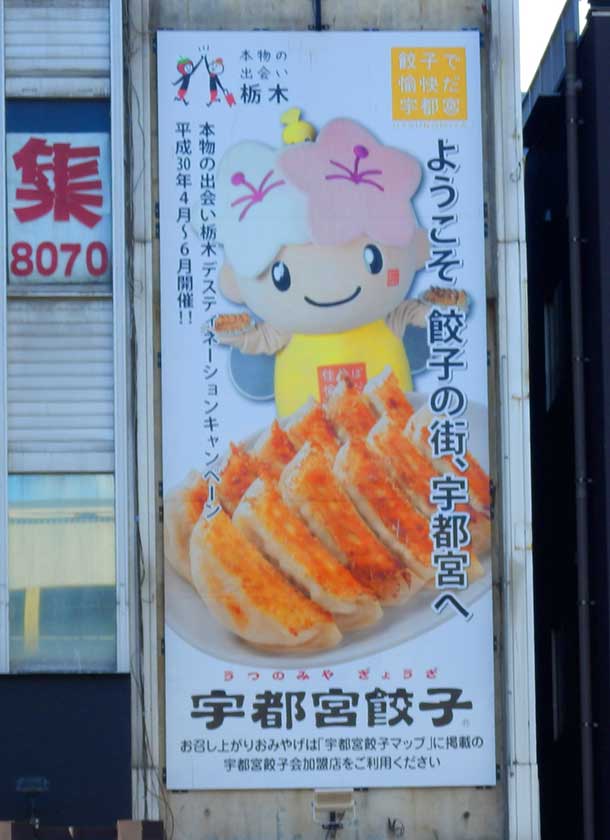 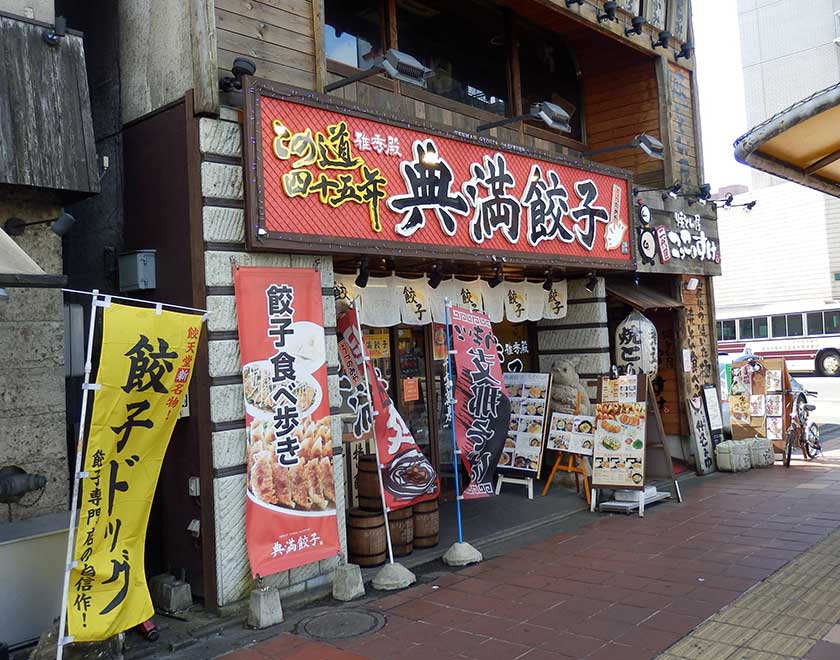 Gyoza are a type of meat-filled dumplings commonly served in Japan as a side-dish in ramen noodle restaurants.

A type of fast-food more or less, in most cases.
Utsunomiya gyoza however are different: there are more than 30 restaurants in the city exclusively serving the dumplings.

While traditionally a gyoza consists of minced pork meat wrapped in a thin skin of gyoza dough, in Utsunomiya pretty much anything and everything can come wrapped up as a gyoza.

Besides meat gyoza, expect to find garlic gyoza, cheese gyoza, shrimp gyoza and much, much more. Even shark fin gyoza, walnut gyoza and chocolate gyoza are on offer.

As so often in culinary history, the historical background of the Utsunomiya gyoza is a story of war and conquest.

Gyoza are originally a northern Chinese dish. From Meiji times (1868-1912) on, Utsunomiya was a major garrison city. During the time of the Japanese occupation of Manchuria (1931-1945), many soldiers based in Utsunomiya were stationed in Manchuria and that's where they learned to love the dish and found out about the local recipes.

Once those soldiers returned from China after the end of World War II, to a city almost completely burned to the ground by American bombings targeting their barracks, the soldiers began to open up gyoza dumpling restaurants to eke out a living.

Post-war limitations in the supply of ingredients led to further innovation as did, soon after, the competition between the many Utsunomiya gyoza houses.

In 1990, a local gyoza restaurant association was formed and from then on, it was only a matter of time until Utsunomiya emerged as the gyoza dumpling capital of Japan. 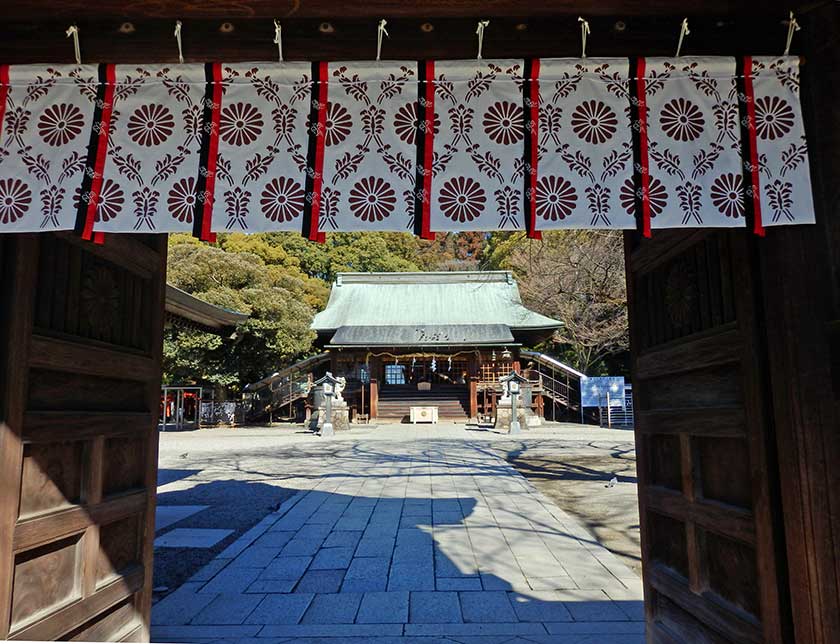 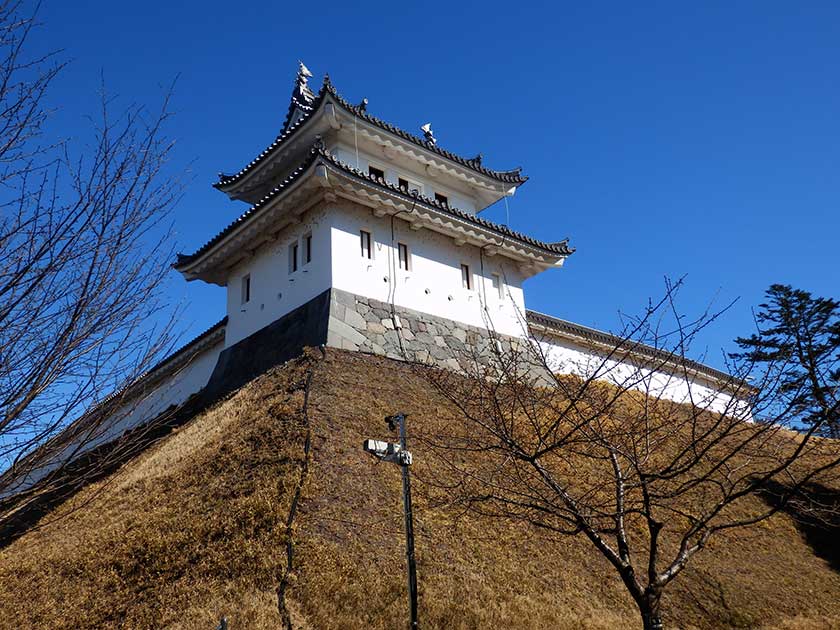 The major historical attractions of Utsunomiya are all within walking distance from the train station area with its concentration of gyoza restaurants.

First of all, Futaarayama Shrine should be visited. The shrine is located on a hill and it takes a good number of steps up the stone stairway to reach the shrine from the main street below.

Futaarayama Shrine is considered the birthplace of Utsunomiya and to have been deeply involved in the entire history of the city.

It was founded in 353 AD, according to legend, and served for many centuries as the main shrine of the local fiefdom. The town developed around the shrine, enjoying documented prosperity from Heian times (794-1185) on until Shogun Hideyoshi Toyotomi burned the city down in his efforts to unify Japan at the end of the 16th century.

During the Edo Period (1603-1868), Utsunomiya grew into a major trading post, thanks to its location on the Nikko Kaido, the road connecting Edo (now Tokyo) with the historic town of Nikko.

Ieyasu Tokugawa (1543-1616), the first shogun of Edo Japan, supported Futaarayama Shrine and helped it in many construction projects, resulting in its current appearance.

Today, the shrine is a quiet, serene place in the shadow of giant trees well above the noisy city.

Famous are the kagura ceremonies held at the Futaarayama annually on January 28th, May 28th and September 28th. They date back to the middle of the Edo Period and provide splendid re-enactments of the mystic stories of the ancient Shinto gods via traditional stage dances and ceremonial Shinto music.

From Futaarayama Shrine, it is about a 10 minute walk to Utsunomiya Castle Ruins Park.

Utsunomiya Castle was the main castle of the Utsunomiya clan which ruled the area for many centuries from the Heian Period to the conquest of the city by Hideyoshi Toyotomi in the late 16th century.

Subsequently, the Utsunomiya clan became feudal lords in the service of the Tokugawa, the clan ruling Edo Japan.

Utsunomiya Castle was a gigantic castle with eight turrets in pre-Meiji times, covering a large area surrounded by moats. The Edo shoguns stayed there when travelling to Nikko.

During the Boshin War (1868), the civil war leading to the Meiji Restoration and the establishment of modern Japan, the castle was destroyed in battles between Imperial and Tokugawa forces.

By 2007, two turrets of the old castle had been reconstructed, along with a section of the old moat and the connecting walls. The reconstructed castle remains and the surrounding park make for a leisurely stroll. 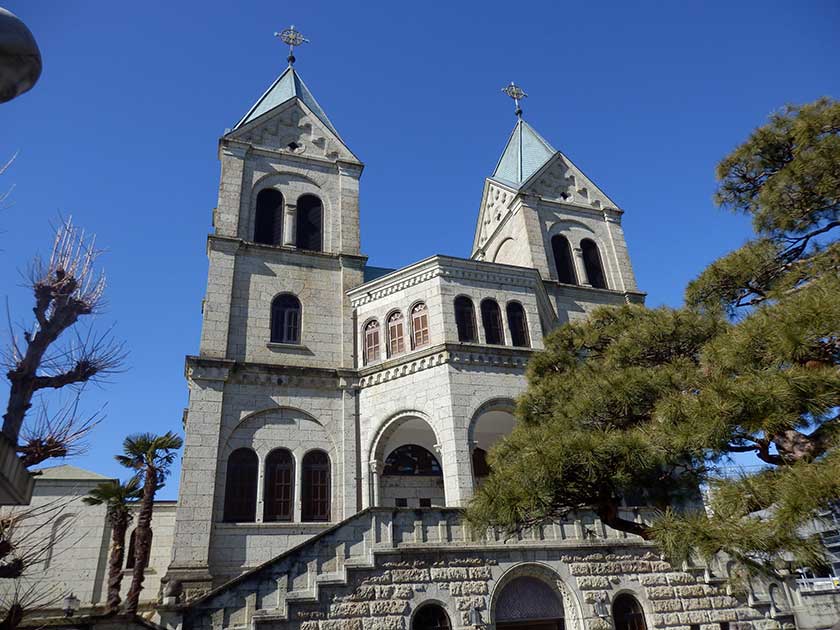 Close to the castle ruins is the Matsugamine Catholic Church, in service since 1932. Designed by Swiss architect Max Hinder, the church is at once a building decidedly dedicated to ancient European architectural styles, while it is, on the other hand, a thorough manifestation of the qualities of a very unique Utsunomiya product - Oya Stone.

Oya Stone is a volcanic stone only found in Oya Valley, a few kilometers to the west of Utsunomiya. Oya Stone is known to have a warm texture and to be easy to carve and thus has been employed for a wide range of uses.

Throughout the northern Kanto region and especially in Utsunomiya, many structures including numerous private residences have been built using the stone. Oya Stone got famous, sort of, when Frank Lloyd Wright used it as finish for his design of the Tokyo Imperial Hotel (opened in 1923, demolished in 1967, though the hotel lobby has been preserved at Meiji Mura in Aichi Prefecture).

When visiting Matsugamine Church, don't miss the frog-shaped gargoyle on the left side of the building. 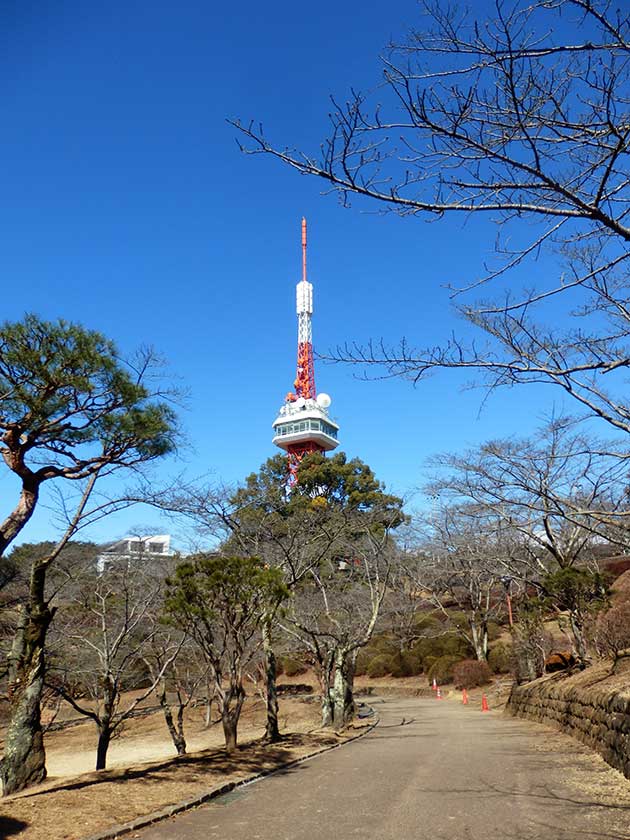 Hachimanyama Park is Utsunomiya's largest park. Located on a hill overseeing the city, the park, planted with about 800 cherry trees, also houses the Utsunomiya Tower.

The tower is open to the public and offers from its observation deck a wide view over the city and towards the mountains near Nikko.

When approaching the park from the Tochigi Prefectural Government building, one way to enter the park is to pass through Gamo Shrine. Gamo Shrine is named after and dedicated to eccentric scholar Kunpei Gamo (1768-1813), a native of Utsunomiya. 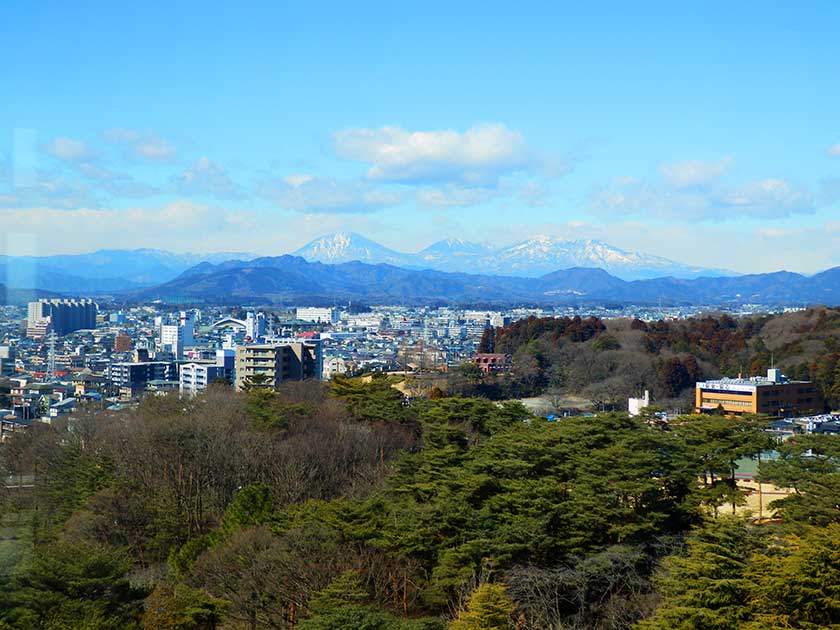 View from Utsunomiya Tower towards the mountains near Nikko, Tochigi Prefecture 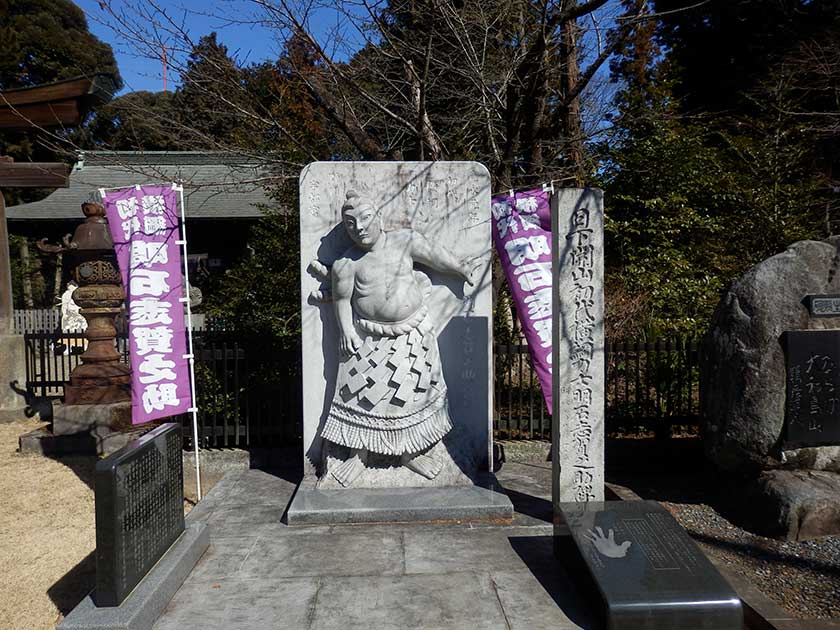 The Tagawa River crosses downtown Utsunomiya from north to south, passing by close to the West Exit of Utsunomiya Station. Pedestrian walkways along both sides of the river offer good views towards the buildings of modern Utsunomiya as well as access to a number of small but serene Buddhist temples. 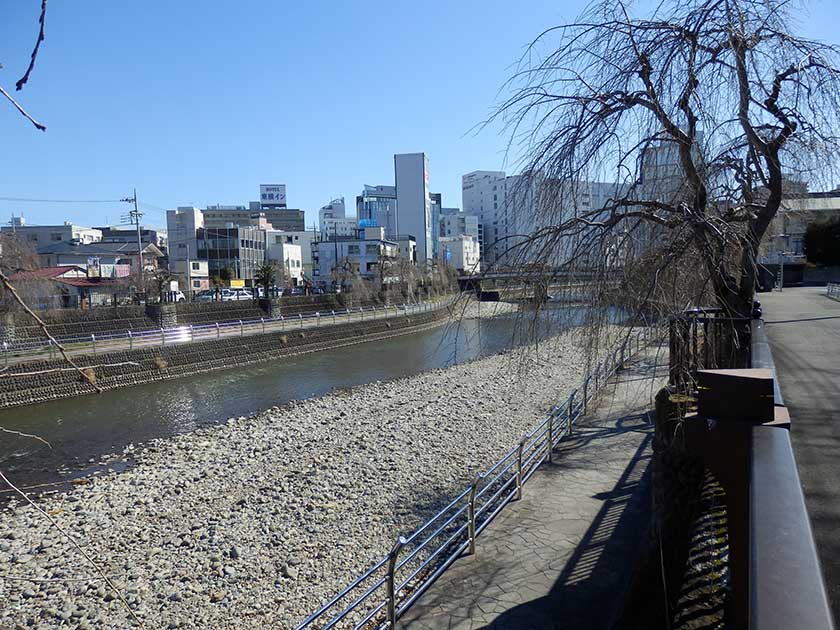 As well as gyoza, Utsunomiya is known for its jazz and cocktail bars. The jazz connection comes from the fact that Japanese jazz saxaphone great Sadao Watanabe was born here as was guitarist Haruhiko Takauchi. The tourist office has a leaflet detailing the around 20 jazz bars in the city and the more than 30 places you can sample cocktails. Most are situated close to Tobu-Utsunomiya Station.

The cocktails are made from the local fruit Tochigi is famous for especially strawberries and pears. The barmen and women put on shows of coctail mixing accompanied by music. Several bars mix the cocktails with jazz for example Lucifer (Tel: 028 639 5599). 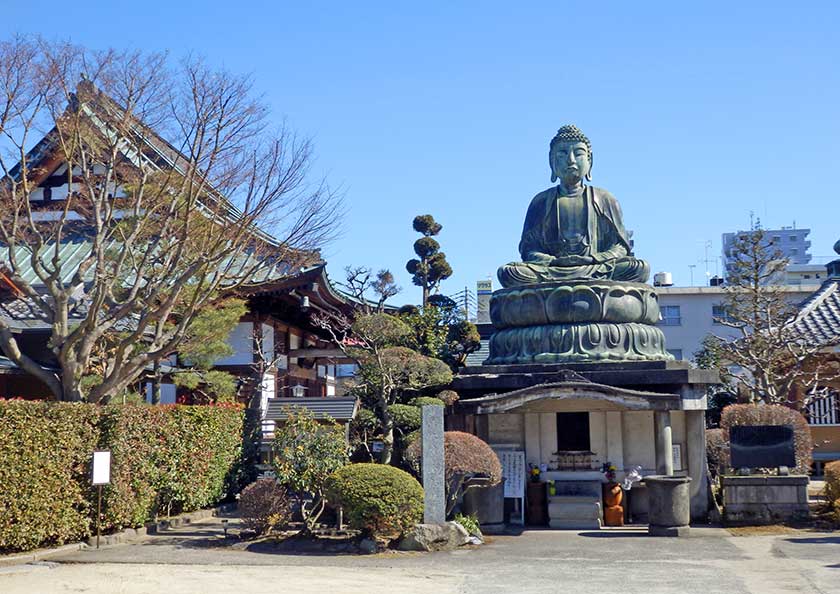 Zenganji Temple, one of the several, serene temples lining the Tagawa River in Utsunomiya, Tochigi Prefecture

Utsunomiya: read a guide to Utsunomiya in Tochigi Prefecture famous as the capital of gyoza dumplings in Japan.

$43 per person
Discover all our activities in Nikko (151)

The most beautiful mountains of Nikko

Nikko is one of the cities that best sums up Japan.

Mount Nantai is located in the middle of the Nikko Mountains, in Tochigi Prefecture.

One hundred kilometers northeast of Nikko, the town of Shirakawa has some great surprises stored for visitors.