Yokai on the Oki Islands

The family of Mizuki Shigeru, the creator of the GeGeGe Kitaro anime and manga, originally came from the Oki Islands and yokai statues are spreading in the Okis.

Ghosts, goblins, ghouls, spooks, spirits, spectres, monsters, ogres, and demons, Japan is home to hundreds and hundreds of fantastic, phantasmagorical creatures and supernatural entities that can be grouped as various types but which all fall under the single category of yokai!

They've been around for centuries, but in recent decades have enjoyed a resurgence in popular culture and a growing interest in them from outside of Japan. 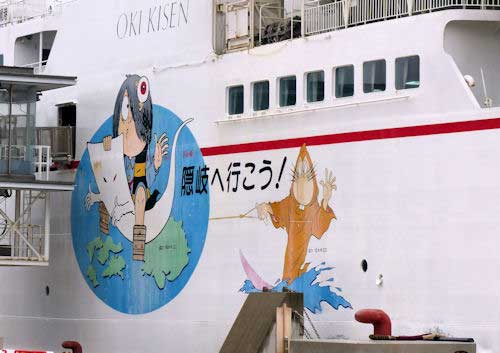 Ferry from Sakaiminato to the Oki Islands 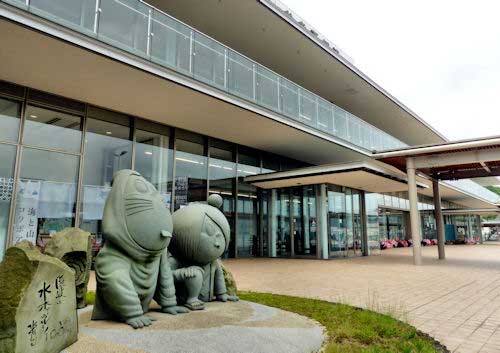 If there is one single person that can be said to be responsible for the popularity of yokai in Japan today, that man would have to be Mizuki Shigeru.

Through his manga creations and subsequent anime, Shigeru revived many of the ancient yokai from Japanese legends and folklore, but also created many new yokai that are now some of the best known.

He grew up in the port town of Sakaiminato in western Tottori, and his home town has remade itself as the yokai capital of Japan and among the many sights dedicated to yokai in the town there are over 100 bronze statues of yokai lining the street named Mizuki Shigeru Road.

The trains running to Sakaiminato on the JR Sakai Line are decorated with images of yokai on the exterior and interior, and all the stations on the line from Yonago are named after and decorated with yokai too. Shigeru said that his family originally came from the Oki Islands, a small group of islands in the Sea of Japan off the north coast of Shimane Prefecture in western Japan.

Sakaiminato was historically the port through which contact, communication and trade with the Oki Islands were conducted, so it makes sense that his family would have settled in Sakaiminato.

The Oki Islands have now become an extension of the Mizuki Shigeru Road, with bronze statues of yokai starting to appear at various sites around the islands, but even before reaching the islands yokai make an appearance. Sakaiminato is one of two ports with ferry services to the Okis, and the sides of the car ferry that runs from Sakaiminato is decorated with Shigeru's most famous and recognizable creation, GeGeGe Kitaro. Based on an earlier folk tale, Shigeru's manga began in 1954 and has since spawned multiple anime versions as well as a live action movie.

Looking like a young boy, though actually a yokai hundreds of years old, Kitaro's adventures mostly involve trying to bring peace and solve problems between humans and yokai, and he is accompanied by an assortment of yokai sidekicks, the best known being Nezumi Otoko, Ratman - half human and half yokai - over three hundred years old, filthy and smelly because of his avoidance of bathing.

Though not always helpful to Kitaro, Ratman's main weapon is an immobilizing fart. In the design on the side of the ferry you can also see an eyeball on Kitaro's head, this is Medama Oyaji, Kitaro's father, and known in English as Daddy Eyeball.

Once you reach the Okis you will be greeted by more yokai. At the port in Saigo on the largest island of Dogo, the quay side itself is painted with a mural of Kitaro and other yokai. Obviously best viewed from high on the ferry's upper decks as you arrive or depart. In front of the ferry terminal is a statue of Kitaro and Ratman. The ferry port in Beppu on the neighboring island of Nishinoshima also has a yokai mural painted on the quay side, and at Kurii Port on the small island of Chiburijima, the flat roof of the tiny ferry terminal is similarly painted. 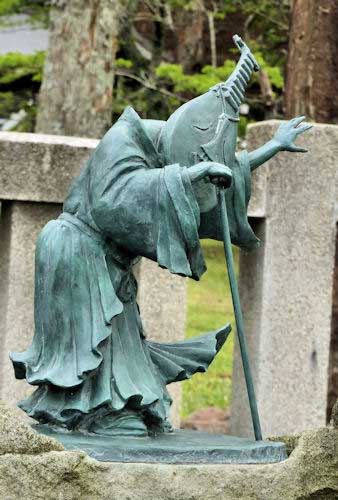 On the main island of Dogo, though, is where the most bronze statues of yokai can be found. In front of Tamawakasu Shrine, a major tourist site, is a statue of Biwabokuboku. This is one of a class of yokai called Tsukumogami, and is based on the ancient belief that once a utensil or tool becomes 100 years old it gains an animated soul.

The Biwabokuboku is based on the Biwa, commonly referred to as a Japanese lute, and like most Tsukumogami is not really malevolent, though can be prone to pranks, typically when feeling ignored or abused. A distinguishing feature of the Biwabokuboku is the expensive kimono it wears. 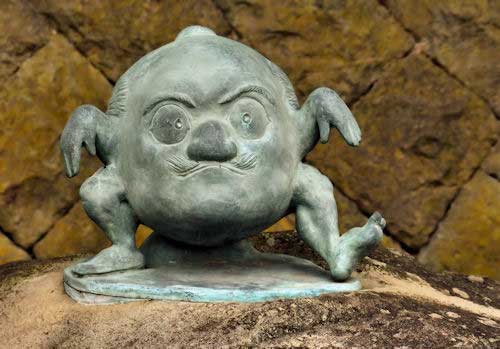 Right next door to Tamawakasu Shrine is the Oki Family Residence, a traditional thatched home now containing a small museum. Here you will find a statue of a Gotaimen. Known since at least the Edo Period, little is known about it other than its form of having a face as a body with limbs protruding from it. 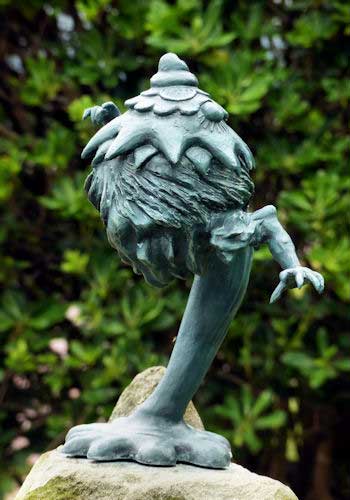 Sazae, often known in English as Turban Shell, is a very popular shellfish consumed all over Japan but with strong associations with the Oki Islands where Sazae Curry is a popular dish.

Living creatures that reach a venerable age can become yokai, and in the case of Sazae that age is thirty years. The most famous story of Sazaeoni is when it took the form of a beautiful woman rescued from the sea by a pirate ship. After having sex with each of the sailors in turn she bit off their testicles and would only give them back in return for treasure. This statue is located right next to Sazae Mura, an eatery in the fishing village of Nakamura that specializes in sazae dishes. 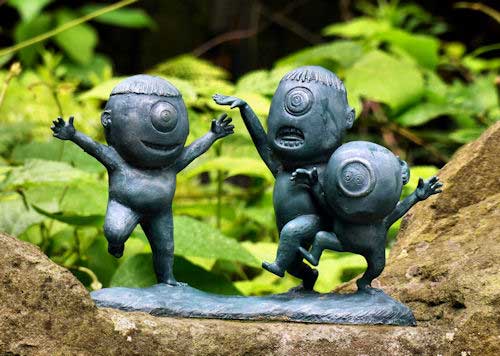 Seko are believed to be a particularly wild form of kappa, preferring mountains and wild mountain streams to the rivers, ponds, and irrigation ditches where most kappa dwell. Believed to look somewhat like a human baby, they can be heard crying out at night in the forest. This little group statue is located at Kabura Sugi, a giant, weirdly-shaped, ancient Sugi tree (Japanese Cedar) in the mountains of central Dogo. 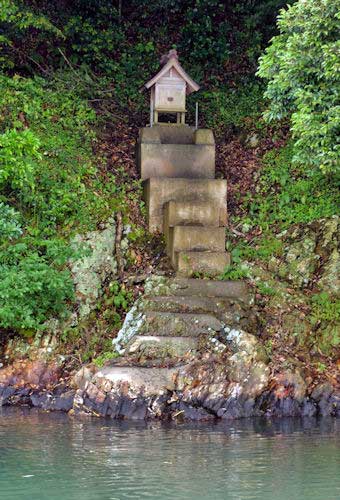 Kappa are a very widespread and well known yokai throughout Japan, with many areas  having their own legends and stories, the Saigo area of Dogo Island being one of them.

Often called a "water sprite" or "water imp" this yokai looks somewhat like a human child but is green with scales and often a beak and turtle-like shell, however the defining feature is a shallow cavity on top of the head.

Quite mischievous, kappa are able to shape-shift, a feature common to many yokai. In many areas they are considered manifestations of Suijin, the Water God.

In Saigo you can take a Kappa Boat Tour which travels around the harbor area and up the river. Along the way places where kappa are said to live, like in the photo above, will be pointed out. Saigo also has a small Kappa Park containing numerous statues and artworks of kappa.

Currently there are several more yokai statues around Dogo, and a couple on Nishinoshima. 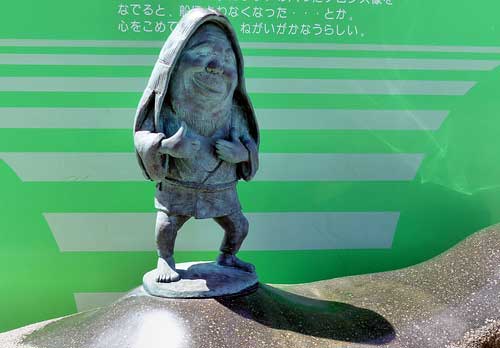 At the ferry terminal in Beppu there are a couple of statues, one of Medama Oyaji, Daddy Eyeball, Kitaro's father, and another of Takuhi Gongen, a yokai unique to Nishinoshima.

Gongen is a Buddhist term for a kami, a native Japanese god, and Takuhi Gongen is the kami enshrined in the unusual Takuhi Shrine built into a cave near the summit of the highest point on the island. It is said that Takuhi Gongen helped helped sailors find their way.

Getting Between the Oki Islands

A fairly frequent and fast ferry service connects the three islands of Dozen, but between Dozen and Dogo you need to use the car ferry or jet foil.

Read more about access to the Oki Islands and getting around the islands.

Map of the Oki Islands

Our tours in Oki Islands

Nishinoshima Island is a small island in the Okis that along with its neighbors Nakanoshima and Chiburijima are collectively known as Dozen.

Dogo is the largest of the four main Oki Islands and is known for the beauty of its coastline, interior, Bull Sumo and delicious food.

Bull sumo: the traditional sport of Japanese bullfighting or bull sumo still takes place on Dogo in the Oki Islands and the bulls are unharmed.