Sefa Utaki located on Cape Chinen at the south end Okinawa, is a sacred site in the Okinawan religion and a UNESCO World Heritage site.

Utaki is the Okinawan word for "sacred site", often a grove of trees, but sometimes a rock or cave or spring, and there are hundreds if not thousands of them scattered all over the Okinawan Islands. 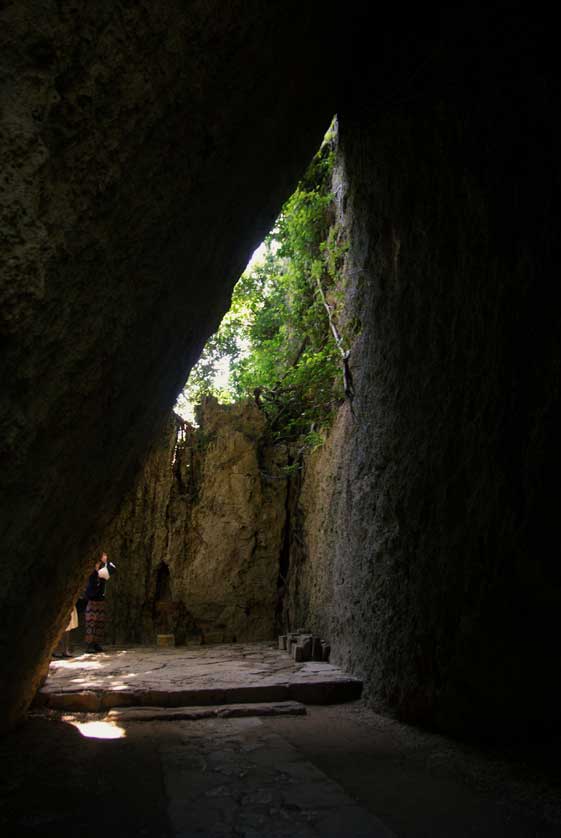 The Okinawan religion bears some similarity with Shinto in Japan: ancestor worship and animism being some obvious parallels, but there are also some major differences, one being access for outsiders.

Whereas in Japan shrines are public spaces open to all, there are in general no restrictions on outsiders visiting shrines, taking photographs etc. In Okinawa it is quite the opposite.

Some Utaki completely forbid outsiders from entering, most others restrict access during ceremonies, and most have signs in place forbidding photography. The one big exception to these rules is Sefa Utaki, now a World Heritage Site.

Sefa Utaki is located on Cape Chinen at the southern end of the main island of Okinawa, and it was here that the Okinawan myths say that people first arrived on the main island. 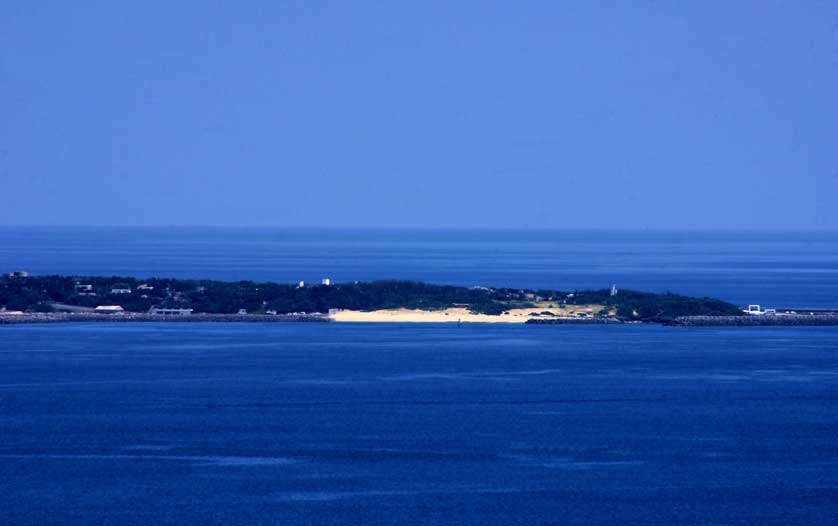 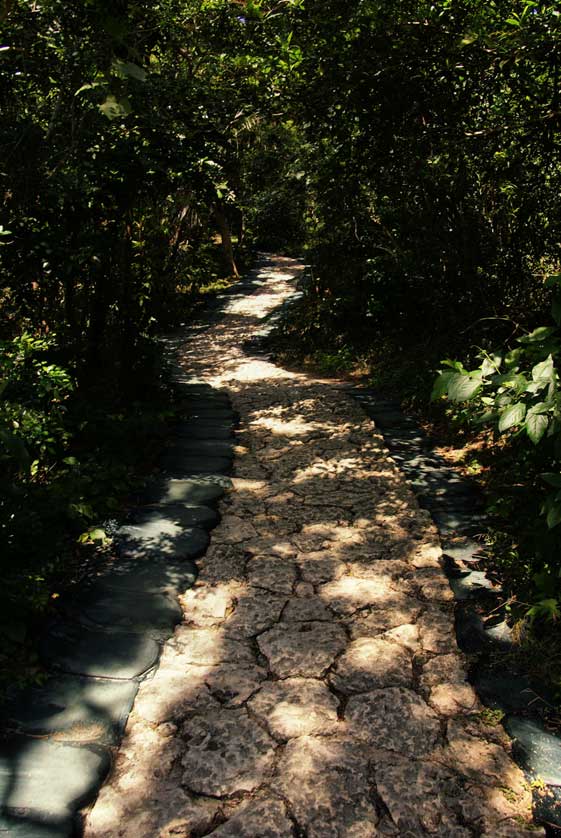 Sefa Utaki, south of Naha, on Cape Chinen, is a sacred site in the Okinawan religion

After leaving the small visitor center you then take a path up the side of the hillside through the verdant and luxuriant sub-tropical forest, the same path used for centuries by the priestesses and shamanesses, as this is another difference between Okinawan and Japanese religious practices, in Okinawa it is women who make up most of the religious leaders, whereas in Japan men came to dominate, at least partially under the influence of Buddhism.

Partway up the trail a short side trail takes you to an overlook where you can the small island of Kudaka about 5 kilometers offshore, still a very sacred place with many Utaki off limits to outsiders.

It is on Kudaka where the Gods first descended from heaven bringing with them grains and beans, and also where the Okinawan people were first created.

Climbing higher you then come to a series of shrines and altars, most built under the overhanging limestone cliffs. There are no buildings left but the stone foundations remain. At one altar a pair of ceramic jars collect water dripping from two stalactites.

This water was, and still is, used in divination ceremonies. Sefa Utaki is classed as the most important religious site in Okinawa, and dates from the time of King Shosin who ruled from 1477 to 1526, the third king of the second Sho Dynasty.

It was he who created an organised, national, religious system and explains why each of the sites at Sefa Utaki is named after sites within Shuri Castle.

The trail ends at the final site, Sanguii, a narrow opening between two huge slabs of rock that leads to the final, and some say, most sacred of all the altars. 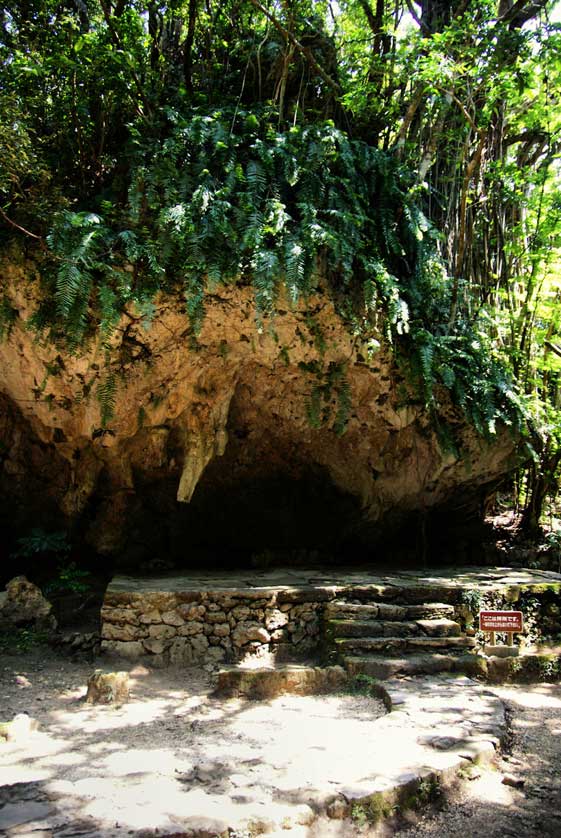 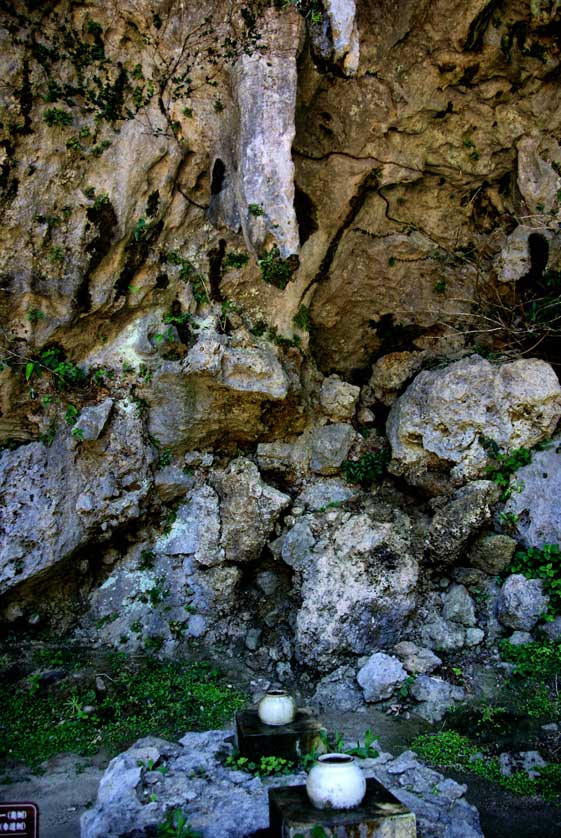 Sefa Utaki is located in Nanjo Town on the coast road, not far from Okinawa World and the Peace Memorial Park. There is a bus from Naha, but like most sites in Okinawa, rental car is the most convenient.