Right at the foot of the mountains, close to the banks of the Koma River, sit the Koma Shrine and the Shoden-in Temple, about a kilometer apart from each other but closely related. They are both said to have their roots in a very violent period on the Korean Peninsula 1,300 years ago. 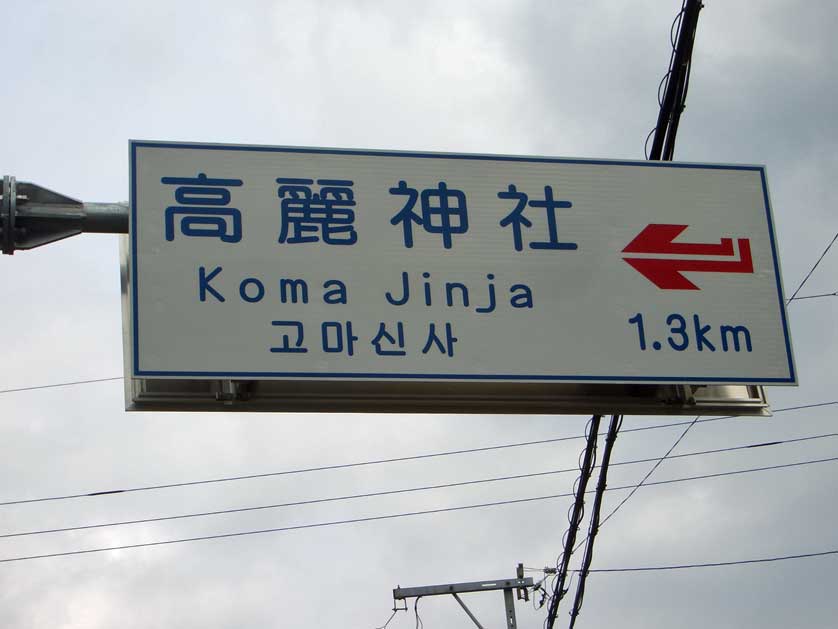 Sign in Japanese, English and Hangul pointing towards the Koma Shrine, Saitama

Most road signs pointing towards Koma Shrine have its name spelled out in Korean as well as the customary Japanese / English combination. Arriving at the gate of Koma Shrine, you will encounter prominent and distinctively Korean-looking structures making it obvious that this is not a regular Shinto shrine. 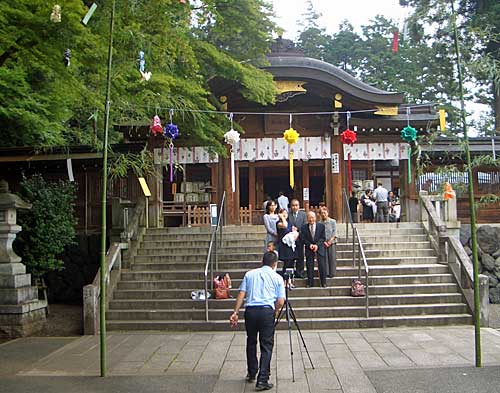 Family ceremony in front of the main hall of Koma Shrine, Saitama

The Chinese characters 高麗 (pronounced Koma in Japanese) can also be read as Goguryeo, the name of an ancient kingdom. Goguryeo formed in Northeast China in the 1st century B.C. and then slowly conquered the northern half of the Korean Peninsula. In the year 427 A.D., the then sitting king moved the capital of Goguryeo to the city today known as Pyongyang.

The economy, arts and crafts thrived in Goguryeo. The country had close relations with Japan, then still in its early stages of development, but it had formidable adversaries, too. Two of them were situated further south on the same peninsula: Baekje and Silla. They covered the area of what is today South Korea and they were highly developed cultures, too. The period is known in Korea as the "Three Kingdom Period" and its latter days, at least, are well documented.

Eventually, in 661 A.D., Baekje fell to the Chinese. China allied with Silla in their effort to subjugate Goguryeo. The Goguryeo ruler Sengai Sobun repelled their advances, his country enjoyed a last fleeting moment of glory.

The rest of Goguryeo history reads like a textbook example of self-destruction: when Sengai Sobun died, his two sons Danken and Danzen couldn't agree who would be the one in charge ruling the country. Their disputes resulted in a civil war that weakened the country to such a degree that it enabled the combined forces of China and Silla to eventually conquer Goguryeo. In 668 A.D. Pyongyang fell. Goguryeo culture was thoroughly destroyed; to break all resistance, a large part of the population was forced to relocate into China.

Only a few years later, Silla started its own war with China and took over the Southern part of the wasted lands of Goguryeo, reaching north up to the Taedong River (on whose banks Pyongyang is located). 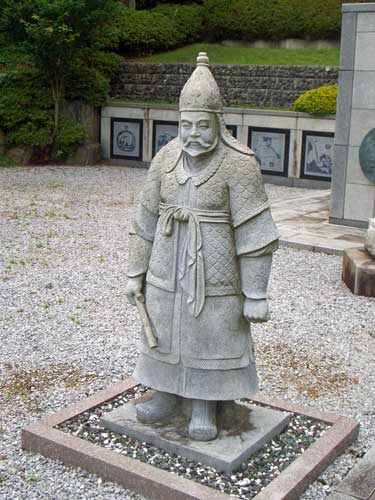 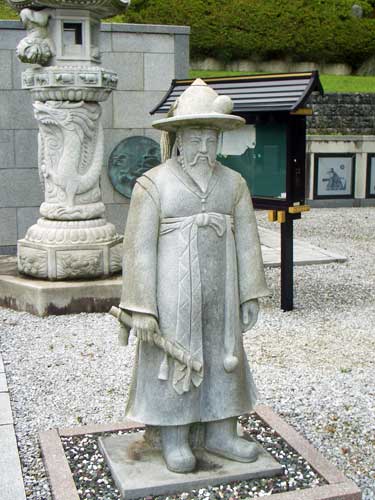 Another statue of an historic Goguryeo noble at Shoden-in Temple, Saitama

The Nihon Shoki, the second-oldest book on Japanese history (published in 720 A.D. and generally regarded as more accurately recounting actual events than the Kojiki, the oldest Japanese book which is more concerned with the legends of the gods), mentions an envoy from Goguryeo by the name of Genbu Jakko. He had been sent over to the Imperial Court in 666 A.D. to ask for support against the Chinese invasion.

Jakko arrived in Asuka (then the capital of Japan, now a village near Nara) but had to witness from afar how his country crumbled until the Chinese / Silla finally ripped it to pieces. He never returned to Goguryeo.

The Asuka Imperial Court held the people from Goguryeo in high regard. Jakko was made a high-ranking court official and was granted the title of kokishi, a hereditary title bestowed upon important people of foreign origin.

Meanwhile, the slaughter and displacement of the Goguryeo people continued. Then as now, such slaughter and enslavement results in a large number of refugees. In the case of Goguryeo, thousands of war survivors arrived on the shores of Japan. The Japanese Imperial Court welcomed them, appreciating the fact that most of them were highly skilled in their respective crafts. 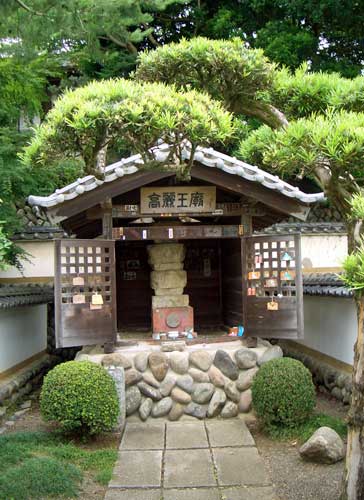 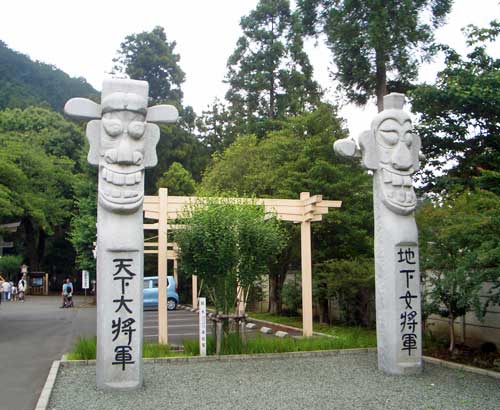 Shogun steles at the entrance of Koma Shrine, Saitama, Japan

According to the records of the Koma Shrine, the former Genbu Jakko, by then called Koma no Kokishi Jakko, was tasked with collecting 1,799 Goguryeo refugees from various locations in eastern Japan in 716 A.D. and settling them into their own homestead. They were given land in the remote wilderness of the Musashino Plain bordering the mountains and they had to clear the land and fight against the bears and wolves traditionally inhabiting the land. Jakko was appointed as their tribal chief and representative. That's where Hidaka city is today, that's where the Koma shrine is located.

When Jakko died, the Koma Shrine was built as a memorial to him. To mark his tomb, the Buddhist Shoden-in Temple was founded by the Goguryeo refugees.

The Koma District given to the Goguryeo people stretched from the foothills of the mountains throughout the vast flatlands of Musashino all the way to today's Sayama city. For many centuries, the Koma folks married only among their own clan, they managed to stay out of most of the Japanese clan wars ravaging the country later on. They thrived in Japan and were a powerful force in their area.

But were they still Korean in any way a thousand years on? It appears that the shrine rediscovered its Korean roots only in the early 20th century, at the same time as Japan annexed Korea. Then, the shrine became an important fixture in propagating the ancient ties between Korea and Japan.

Today, the shrine serves as a symbol of friendship between Japan and Korea. Many South Korean visitors travel there to pay their respects. 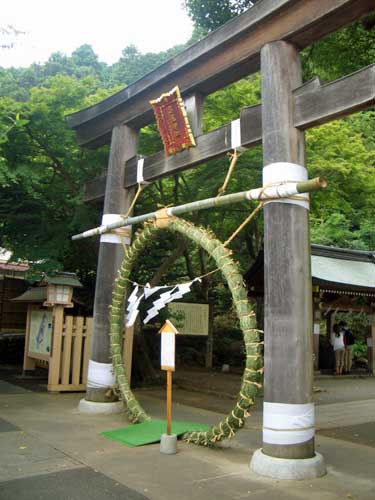 The gate of Koma Shrine. Enter in a "8 shape" fashion

Entering the grounds of the shrine, you will first encounter two distinctively Korean-style steles with the heads of old gods on top of them. They are called "shogun" and supposed to ward off evil spirits in ancient Korean beliefs. The current steles are very recent, though. Pictures from the 1930's show wooden steles of a similar design - but they were also rather recently made.

The shrine itself is nicely set right at the foot of the densely wooded mountains right behind it. It is a beautiful old Japanese shrine with a few replicas of old Goguryeo-style buildings added. 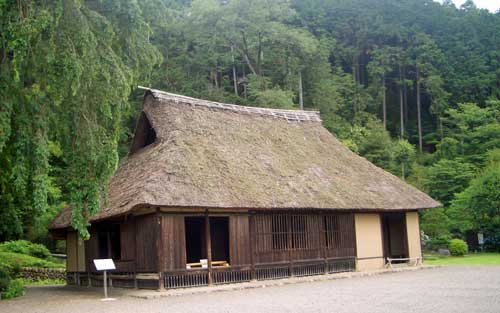 Much less visited than the Koma Shrine but actually more impressive is the Shoden-in Temple, only about one kilometer from the shrine. Here you find the tomb of Genbu Jakko aka Koma no Kokishi Jakko, the founder of the local Koma community.

The ancient wooden temple gate, located next to a small lake, has recently been restored but its century old patina has fortunately been left intact. Next to the gate, you will find a beautiful old Japanese temple garden.

Behind the ancient temple hall, you can walk further up the hill. There, you will arrive at a large memorial ground for the Korean victims of World War II. The charred bones of thousands of Korean victims of the Tokyo bombing raids are stored beneath the stone plates in the central section. Stone statues of legendary Korean kings look out over the memorial site.

Walking up to the top of the hill, you will get a good view all over Hidaka city and beyond, standing next to a statue of the mythical founder of Korea, King Dangun.

The year 2016 marks the 1300th anniversary of the arrival of the Goguryeo refugees in the area. Expect many events and celebrations leading up to the anniversary. 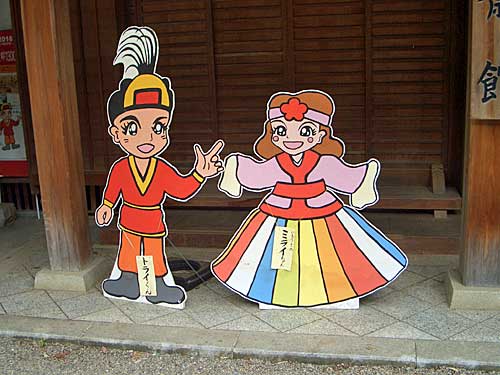 By train from Ikebukuro Station: Seibu Ikebukuro Line to Hanno, change to the Seibu Chichibu Line local train, get off at Koma Station. Walk about 40 mins to the shrine.

From Shinjuku Station: JR Saikyo Line to Kawagoe, change to the JR Kawagoe Line, get off at Komagawa Station. From there, walk about twenty minutes.

At Komagawa Station, you are more likely to find a taxi readily available than at Koma Station.

By car: Drive Highway 299 from Hanno city towards Chichibu, turn right at Kubo (久保) Intersection onto Highway 15, then follow the signs.

Shrine website: www.komajinja.or.jp  The site is in Japanese and Korean, it provides no English-language information.

Koma Shrine has published a very informative booklet in English, however. It is available for 500 yen at the shrine.

Google map showing both Koma Shrine and Shoden-in Temple to the south west. 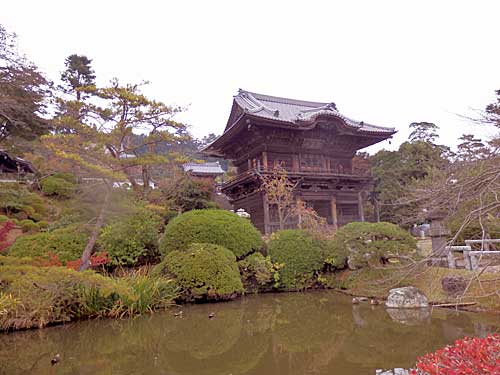