Though its highest peak is only 1104m, Mount Myogi is truly impressive. Rising out of a wooded base, steep, weathered rock walls stretch to the sky.

The upper reaches are for experienced mountain climbers with full equipment only. A little below that forbidding zone, fantastically shaped rock gates and rock formations are within reach for the adventurous hiker. The area is famous for its colorful autumn leaves. 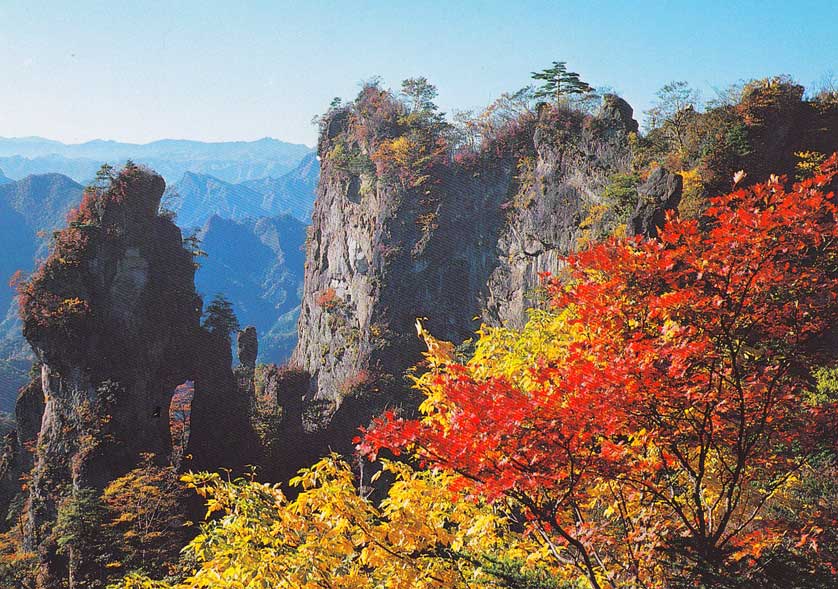 To visit the shrine (and perhaps hike up further), get off the expressway at the Matsuida - Myogi exit and drive to the Myogi michi-no-eki (roadside rest house). The rest house offers plenty of parking and from here, it's all hiking.

Just cross the street and you will enter the premises of Myogi Shrine. The walk up is steep and you pass by a few vintage dwellings until you reach the actual entrance gate.

The old lady in the booth to the right of the gate sells guidebooks, postcards and shrine lucky charms but also has various free maps of the Myogi area on offer. They come in handy if you want to take a hike further up the mountain. If you plan to climb the serious rock reaches, though, you will have to look for more professional material in advance.

Shortly beyond the gate, a long, steep stone stairway leads up to the main shrine. Climbing it, you will notice the huge tree stumps next to it. Close to the tree stumps, the stairs are in serious disorder and you have to be careful advancing on the steps.

At the top of the stairs, you enter another gate. Impressive sculptures of a stern looking red and an equally stern green devil, both dressed in tiger pants, guard the gate.

Right behind is the honden, the main shrine. It dates back to the 1700's and is an absolutely beautiful mountain shrine building. Looking closer, you will see that it serves a myriad of deities and mountain spirits.

At the back of the main shrine, you will find a small, special sub-shrine dedicated to the tengu, legendary mountain demons with big noses and wings on their back, always carrying a fan, who are known for their mischievous pranks. 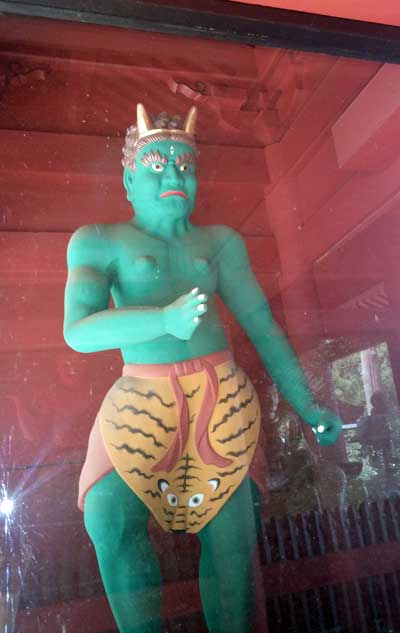 Green demon at the gate of the main shrine building 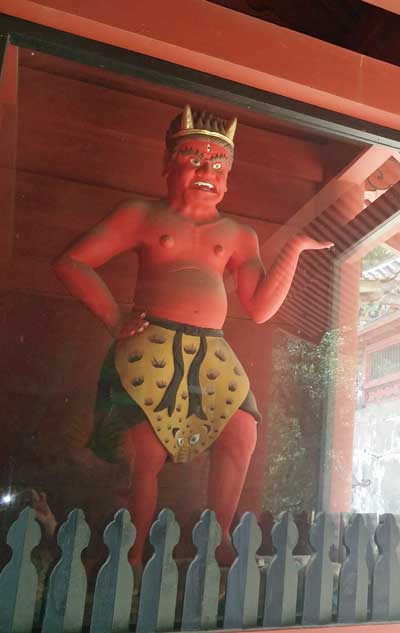 Red demon at the gate of the main shrine building 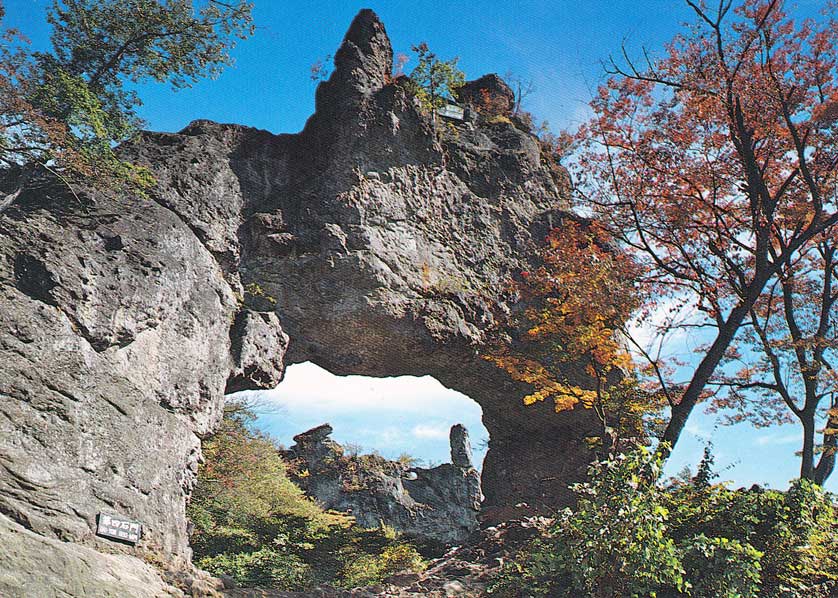 According to legend, Myogi Shrine was established in 537 A.D., the second year of the reign of Emperor Senka.

It took until the Edo Period however (1603-1868) for the shrine to gain national significance and wide-reaching power. During Edo times, the current shrine structures were erected, along with the intricate carvings on the honden.

In the 2000's, the shrine became a movie location frequently used for shooting TV dramas set in the samurai era. 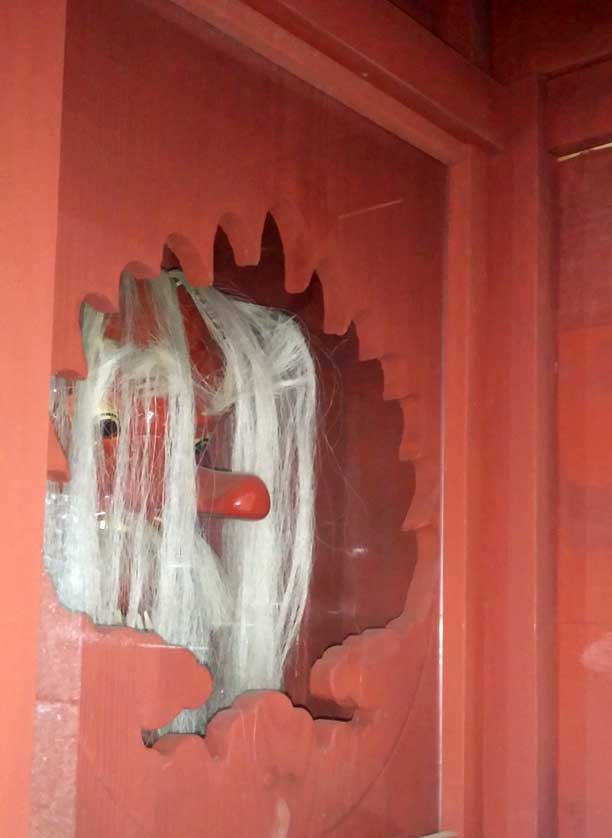 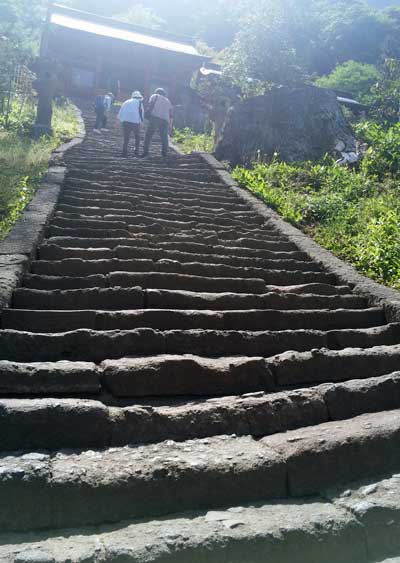 The newly treeless steps to the main shrine 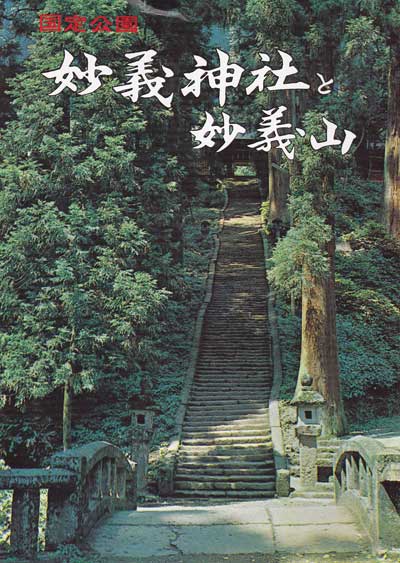 Myogi shrine stairway with trees as pictured in a shrine brochure

Myogi Shrine's location in as wild and dangerous a territory as the Myogi-san exposes it to a wide range of natural perils. Those perils manifested themselves strongly in recent years. Or did the folks at the shrine in some way offend the always irascible tengu mountain spirits?

In 2007, a typhoon caused a landslide that engulfed much of the main shrine. It wasn't destroyed but flooded with mud. The cleaning and repair work took until 2013, when the shrine hall could be opened to the public again.

When you walk a bit uphill behind the shrine, you will encounter a newly erected protective concrete wall. Beyond it, fallen tree trunks and mud-covered areas indicate that the landslide of 2007 was most likely not the last one.

But landslides were not the only trouble. The 400 year-old cedar trees right beside the stairway up to the main shrine began to bend over. Not finding sufficient space on the rocky ground for their roots to hold onto, they threatened to crash down in the next serious storm. The roots had already started to dislodge the stone steps.

In May 2015, the shrine administration sent in the men with the chain saws and as a result you can see the big tree stumps right next to the stairway.

Nonetheless, the Myogi Shrine is still absolutely worth a visit. An extraordinary mountain shrine right at the edge of the land of the tengu. 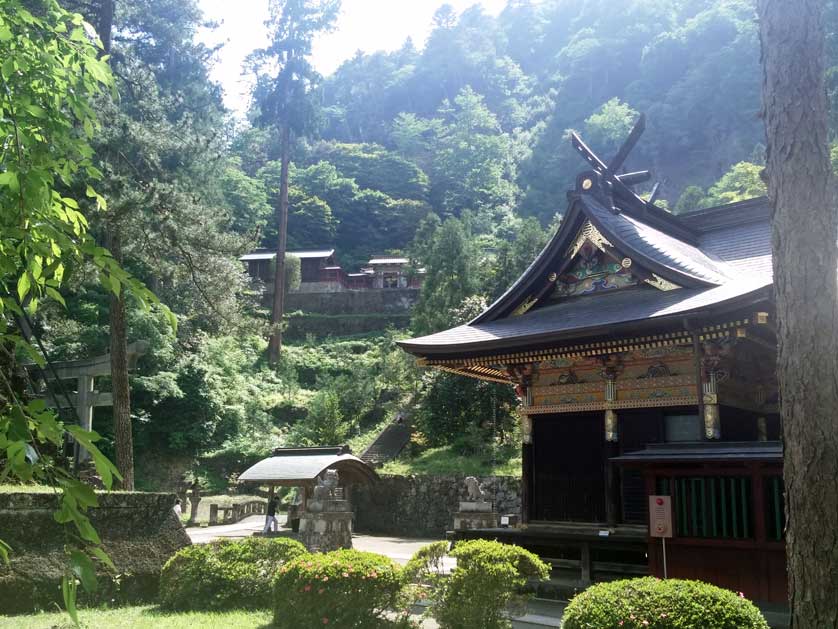 By car: Joshin - Etsu expressway to Matsuida - Myogi exit, follow the signs from there

By train: Joetsu Shinkansen (Tokyo Station - Niigata) to Takasaki Station in Takasaki, change to the Shin'etsu Main line, go to Matsuida Station. From there Myogi Shrine is about 10 minutes by taxi.

Cheaper standard trains to Takasaki also operate from Ueno Station (100 minutes).  You may need to change at Urawa Station or Omiya Station on the way. From Shinjuku Station take the Shonan-Shinjuku Line to Takasaki. Karuizawa is one stop westbound from Takasaki.

There are also highway buses from Shinjuku, Shizuoka, Nagoya and overnight buses from Sendai, Osaka Nara and Kyoto run by Nippon Chuo Bus.