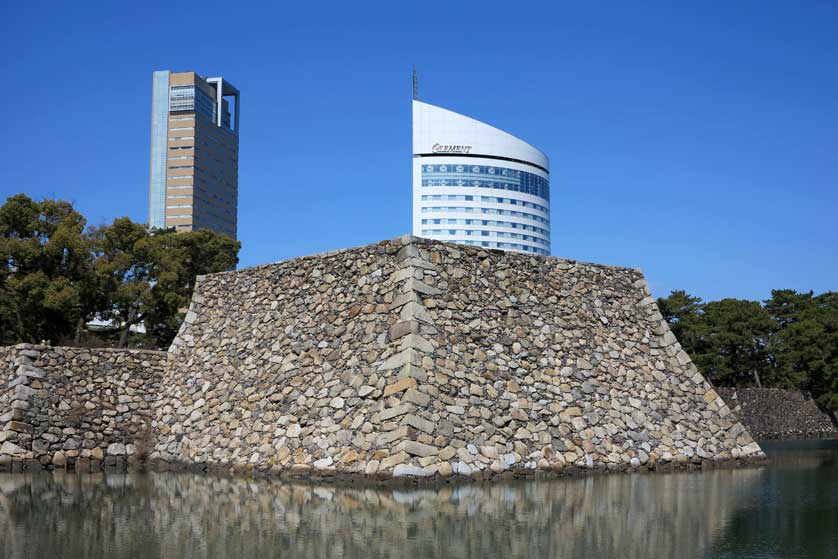 First constructed from 1588-1590 by Chikamasa Ikoma, Takamatsu Castle later in 1642 became a residence of the Matsudaira clan, relatives of the ruling Edo Period Tokugawa shogun.

Takamatsu Castle is of note as it faces the Inland Sea between Honshu and Shikoku islands and the moat was filled with sea water drawn in via sluice gates. Thus along with Nakatsu Castle and Imabari Castle, Takamatsu Castle makes up one of "three great water castles" of Japan.

The moat and stone walls remain along with three turrets and a gate. The Tsukimi Yagura turret facing the sea was built for moon-viewing, hence the name (tsuki = moon; mi = see) and the Ushitora Yagura is a pleasant sight as you speed by on the trains running on the Kotoden Line.

Tamamo Park has a pleasant dry, stone garden and is planted with cherry trees and pine trees.

Takamatsu Castle was gradually demolished during the Meiji Period (1868-1912) as the city of Takamatsu grew in size and was further damaged during World War II. Tamamo Park opened to the public in 1955 and now covers an area of 79,587㎡. 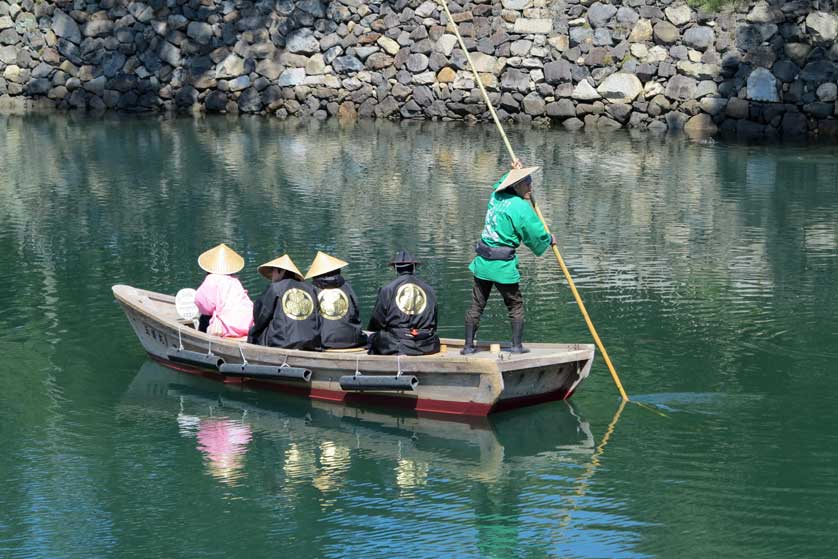 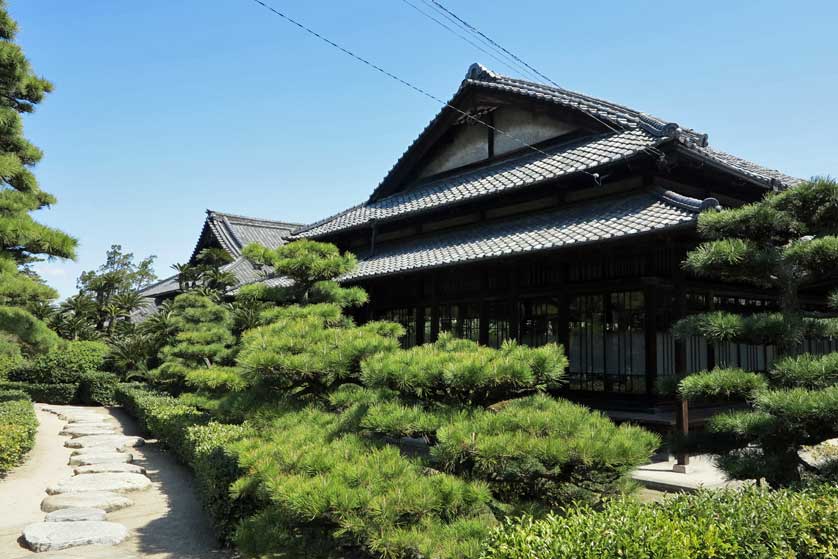 Takamatsu Castle's main buildings include the Sayabashi Bridge, a picturesque roofed bridge that can be seen also from Takamatsu Chikko Station.

The Water Gate (水門) regulates the sea water level in the moats. it is even possible to see sea water fish such as bream swimming in the moat. The Naienoniwa Garden was constructed at the same time as the Hiunkaku in 1917. The Naienoniwa is a traditional dry stone garden. The pine trees growing here were planted in an official ceremony by the Showa Emperor and Empress.

The impressive, wooden Hiunkaku is a reconstruction of the original residence of the feudal lord and is now used for tea ceremonies and flower arranging exhibitions as well as banquets. The present Hiunkaku was built by Yorinaga Matsudaira, a member of the House of Peers, and the 12th head of the Matsudaira family. The building, though smaller than the original, includes a room of 142 tatami mats.

The two surviving turrets at Takamatsu Castle are the Tsukimi Yagura and the Watari Yagura. The Tsukimi yagura was completed in 1676 and served as a watch tower for boats entering the castle, including that of the feudal lord on his return from Edo, present-day Tokyo.

A picturesque entrance to Takamatsu Castle is through the Asahimon Gate over the Asahibashi Bridge.

Just outside the east entrance to Takamatsu Castle at Asahimon Gate is the Kagawa Museum (Tel: 087 822 0002). 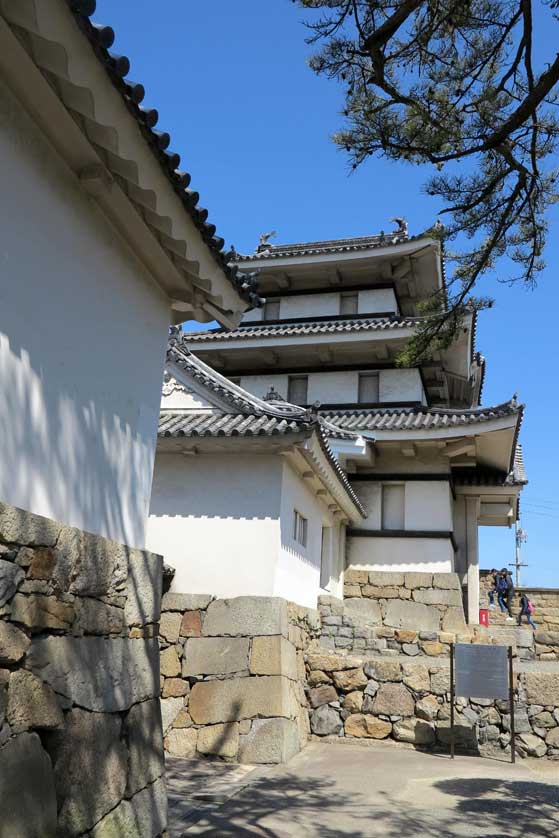 The castle's main entrance is a short walk east from either Takamatsu JR Station or Takamatsu Chikko Station on the north-south Kotoden Line. 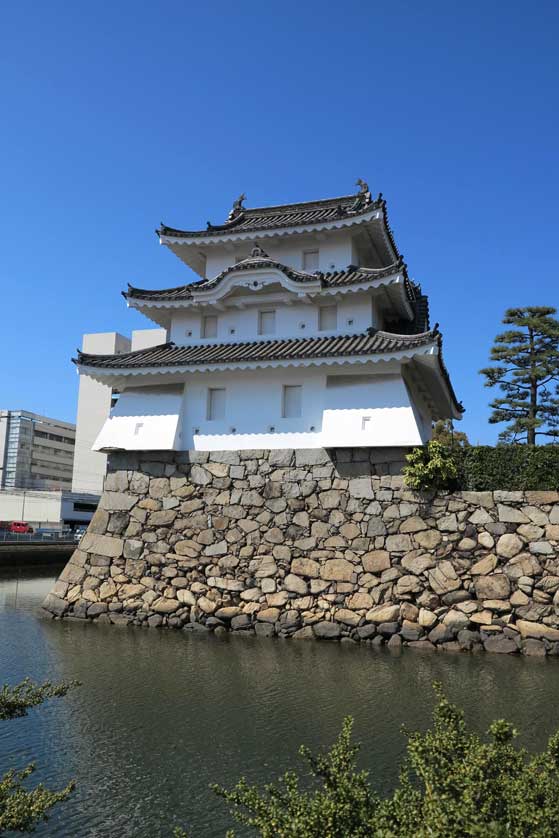 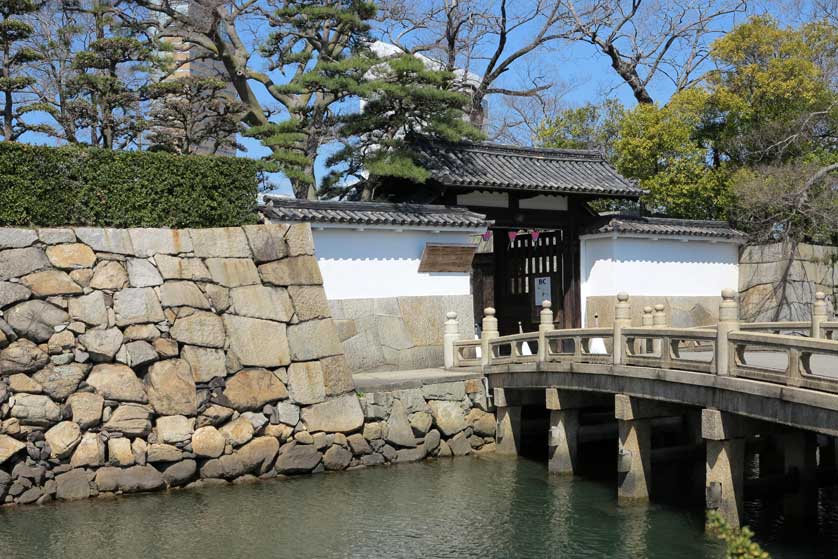