Takaoka's prosperity dates from 1609 when Toshinaga Maeda (1562-1614), the second lord of the Maeda clan, built a castle here, though it was torn down in 1615 before it was even finished under the "one domain, one castle" doctrine of the Tokugawa regime.

During the Edo Period of Japanese history, Takaoka became a center of copper and iron-ware manufacture, as well as the production of lacquerware known as Takaoka-nuri. Cotton-spinning and textile print-dyeing are also important industries in the area and Takaoka's traditional Japanese sweets are well-known. 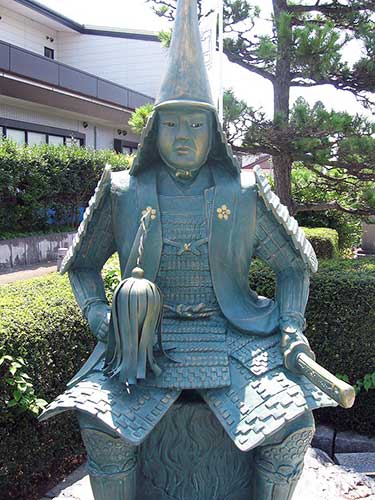 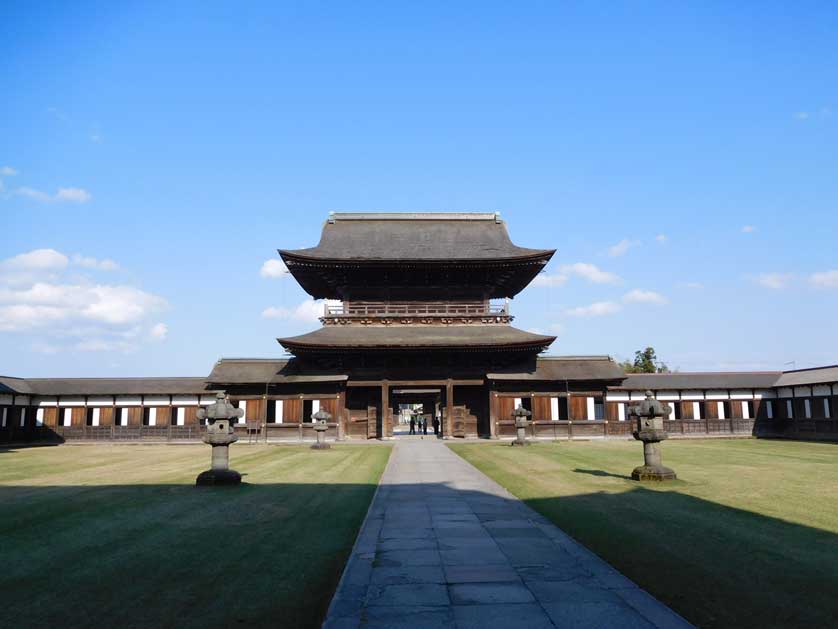 Takaoka Kojo Park is the site of the former Takaoka Castle that was begun by Toshinaga Maeda in 1609 but was demolished in 1615 before it was properly finished. The area became a public park in 1875 and is now home to the Takaoka Municipal Museum, which has exhibits on the history of Takaoka Castle, famous people from Takaoka city and traditional arts and crafts from the area.

Kojo Park also has a rather sad free zoo with a variety of animals in small cages including a flamboyance of flamingoes. The main draws of the park are its wide expanse of lawn and the remaining stone walls and moats of the former castle. The moats are lined with cherry trees and Takaoka Kojo Park becomes the major cherry blossom viewing spot in town during the spring.

Imizu-jinja Shrine is also located within the grounds of Kojo Park, along with Takaoka Municipal Gymnasium and Takaoka Municipal Festival Hall. The Takaoka Art Museum (Tel: 0766 20 1177; 9.30am-5pm; closed Monday) is just outside Kojo Park to the north. This modern museum was built in 1994 and exhibits art and crafts by local artists including the area's signature metalwork and lacquerware. 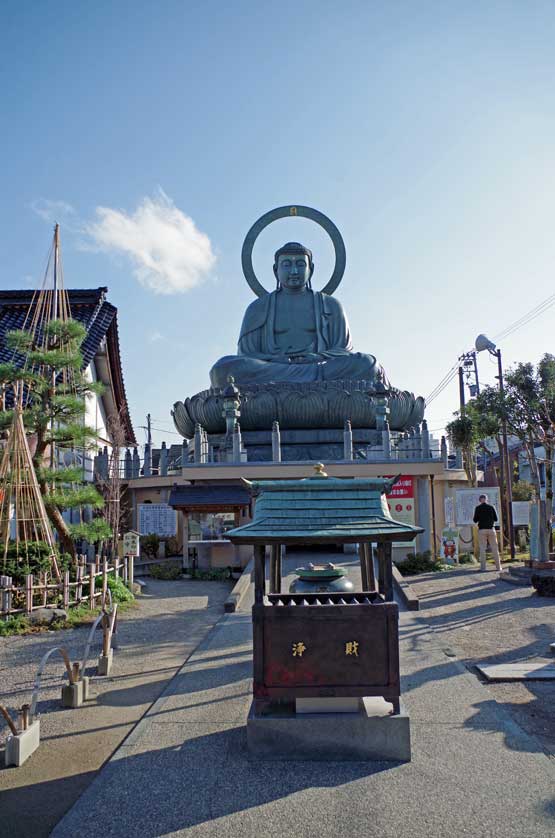 Close to Kojo Park is Takaoka Daibutsu, claimed as "one of the three great Buddha statues of Japan" along with the Daibutsu in Todaiji Temple in Nara and the 13m-tall Great Buddha statue in Kamakura.

Takaoka Daibutsu rises to a height of 15.85 meters (including the base) and weighs 65 tons. It was built using traditional copperware techniques, which are a feature of Takaoka, which is a major producer of copper bells and other copper ornaments for temples around Japan.

The Takaoka Daibutsu was completed in 1933 after nearly three decades of work. The original statue had been made in wood and gilded with gold leaf in 1745 but had burnt down on a number of occasions and then subsequently rebuilt. It is thought that an earlier image of the Buddha rising to about 5 meters had stood on the site since the 13th century.

The wooden head of the previous statue is enshrined within the modern statue which can be entered at the base. Buddhist paintings line the walls of this circular pathway within the statue. 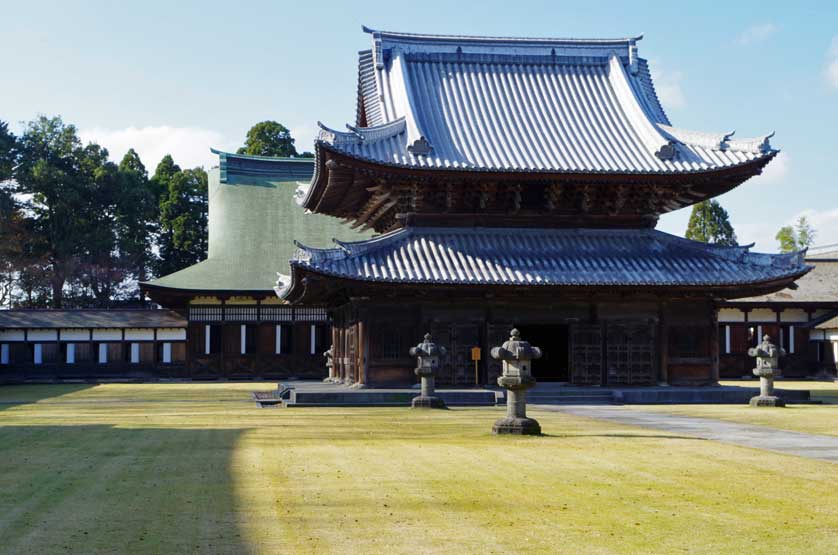 Takaoka's most impressive attraction is Zuiryuji Temple, which was founded in 1645 by Maeda Toshitsune, the third lord of the Kaga domain, to pray for the repose of his brother, Maeda Toshinaga, the second lord.

Maeda Toshinaga was married to a daughter of Oda Nobunaga and was later a supporter of Ieyasu Tokugawa, the victor of the Battle of Sekigahara in 1600, and founder of the Tokugawa dynasty. 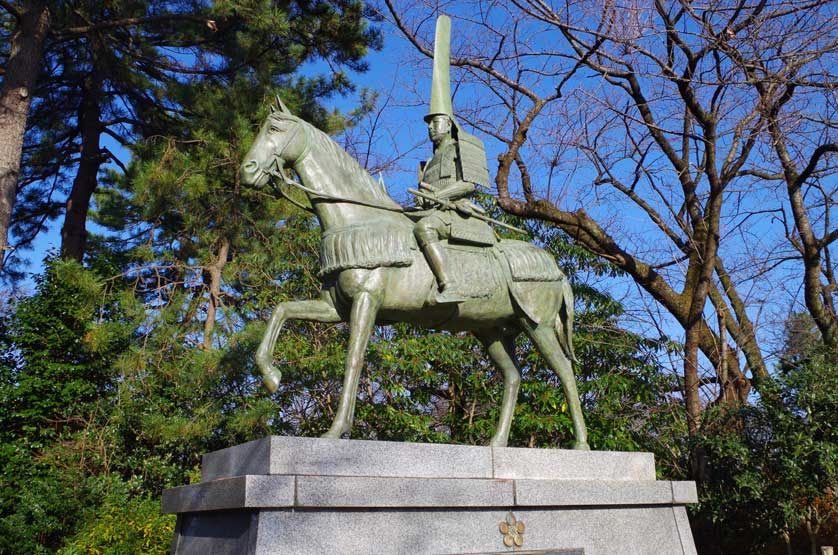 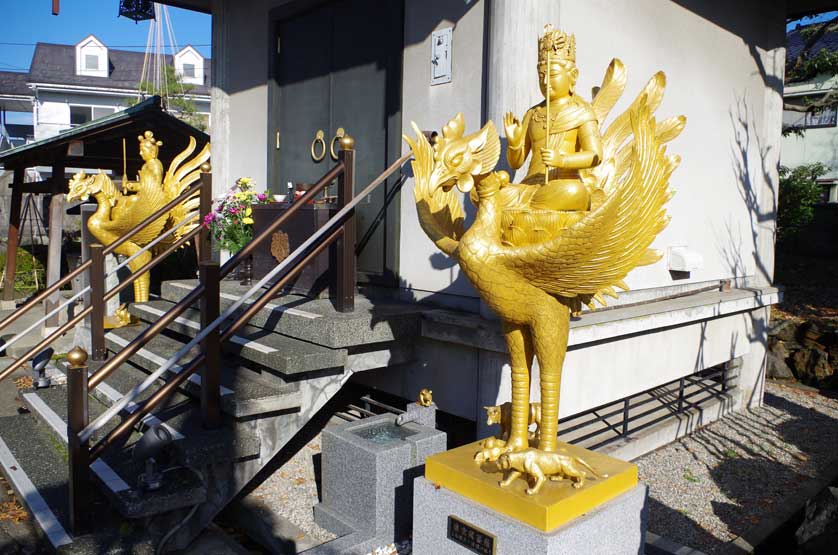 A pretty, paved, tree-lined path leads from Zuiryuji Temple to the Tomb of Toshinaga Maeda in Maeda Park about 800 meters to the east. Just outside the quiet grounds containing the tomb is Hankyuji Temple.

North of Zuiryuji Temple is Sojiji Temple, which is free to enter and worth a quick look.

Back in town west of Kojo Park is Yamachosuji Street noted for its Dozo-style storehouses with thick mortar walls to protect valuables and prevent fire. The Sugano Residence (9.30am-4pm; Tel: 0766 22 3078) has been restored and opened to the public. It was built after a fire in the town in 1900 and has a tiled roof and a striking black painted exterior. 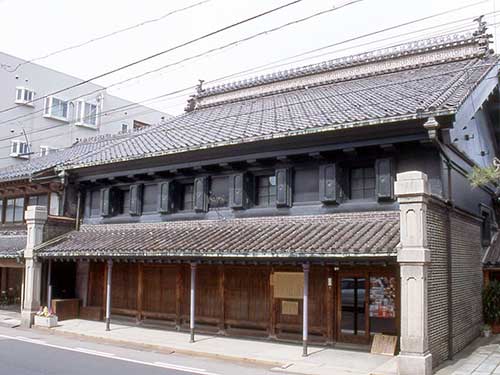 Kanayamachi Street is a row of traditional style residences with lattice windows. This area was a center of copperware manufacturing and contains the Takaoka Casting Museum. It was here that the families of seven metal casting masters settled after being invited to set up shop in Takaoka by Maeda Toshinaga.

Up on the Japan sea coast the Fushiki area is worth a visit if you are in Takaoka for a period of time. The area became prosperous due to the shipping trade in the Sea of japan.

The Takaoka Man-yo Historical Museum (Tel: 0776 44 5511; 9am-6pm; closed Tuesdays) is dedicated to Manyo poetry and the poet Otomo no Yakamochi. Shokoji Temple (Tel: 0776 44 0037; 9 am-4 pm) was a base for the Pure Land Buddhism Rebellion (Ikko-Ikki) during the Warring States period of Japanese history. The Main Hall (Hondo) and Chinese-style gate (Karamon) are both National Treasures.

The Fushiki Weather Station Museum (formerly the Fushiki Weather Museum) was established during the Meiji Period in 1883 and was the first privately run weather station in Japan. The Fushiki Kitamaebune Museum is the former residence of the Akimoto family - a shipping agent's townhouse that still retains a lookout tower. 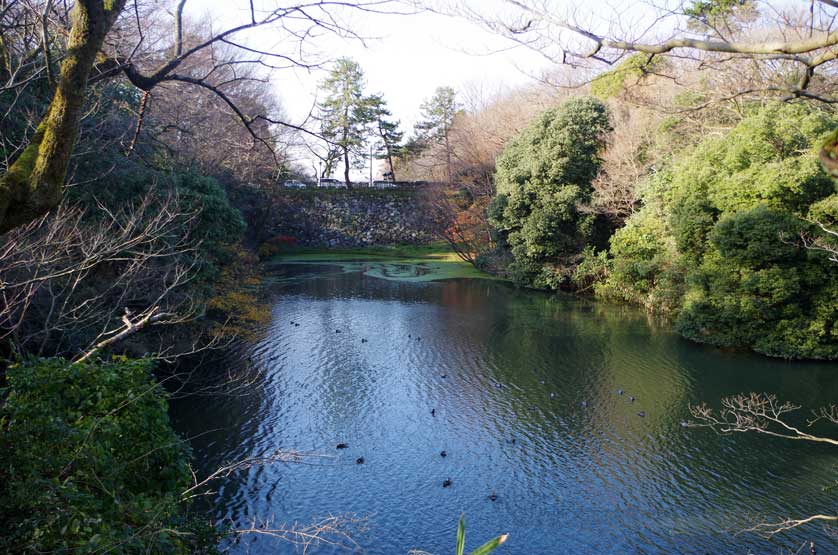 Takaoka is about 30 minutes by car from Toyama city. By Hokuriku Shinkansen, Shin-Takaoka Station is just 8 minutes from Toyama Station.

The 30km Johana Line links Takaoka with Johana in rural Toyama Prefecture from where there are buses to the Gassho houses of Gokayama.

The Ainokaze Toyama Railway runs from Kurikara to Ichiburi via Takaoka and Toyama along the Japan Sea coast. Some trains continue on the Echigo Tokimeki Railway/Nihonkai Hisui Line to and from Itoigawa.

The 16.5 km Himi Line runs north and then west to Himi on the Japan Sea Coast. Get off at Amaharashi Station to visit Amaharashi Beach.

The Man-yo-sen Tram Line consists of two connected tram lines and runs from Takaoka Station to Rokudoji Station and then on to Koshinokata.

The Himi Line and the Man-yo-sen Tram Line both run up to the Fushiki area of Takaoka to the north on the coast.

By car, Takaoka is about 30 minutes from Toyama on National Highway 8. 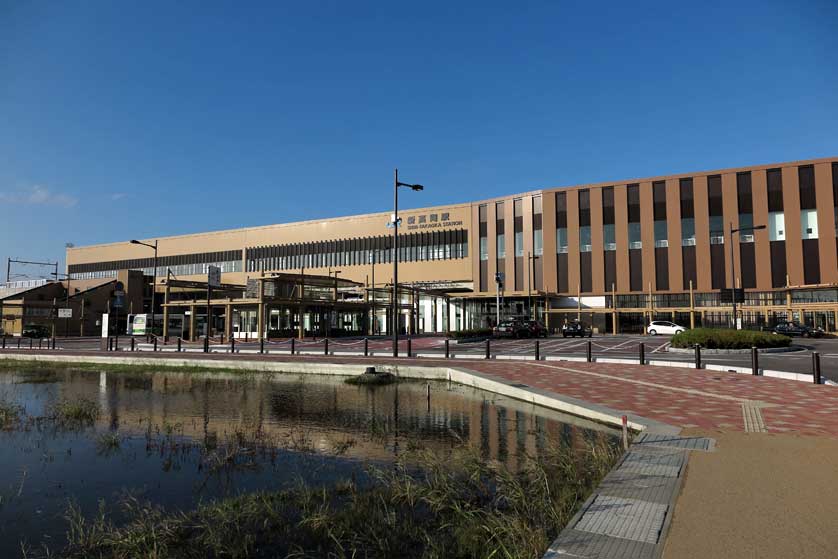 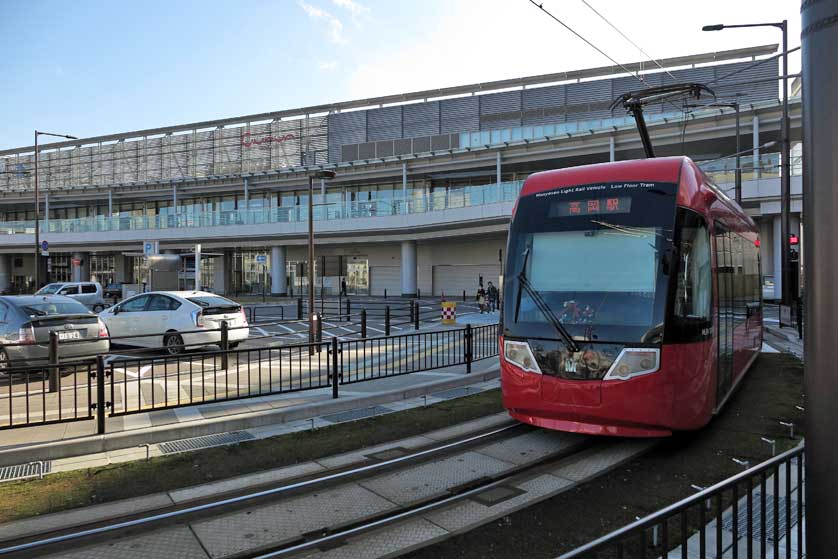 Takaoka guide: Takaoka is the second city in Toyama Prefecture and is known for its copper and lacquerware as well as the beautiful Zuiryuji Temple.

Our tours in Toyama