In winter, festivals don't hibernate in Japan! When it comes to snow, it's the northern regions that are in the spotlight. Discover some festivals not to be missed if you visit Japan in winter.

In mid-February, this festival illuminates the cold nights of Yokote with its soft lights. Every year thanks to the snow, hundreds of igloo-shaped buildings are constructed by the young people of the city and then lit from within by lanterns. This tradition goes back 450 years!

This festival is the country's most famous event around the snow, as well as the world's largest celebration of ice sculpture arts in the world. Every year, from February 1st to 12th, three sites in the city of Sapporo exhibit ice statues, put on concerts and various other activities. Once night falls, the sculptures are illuminated, creating a dreamlike atmosphere.

In the Zao Onsen region, the icy wind and the snow give rise to a curious natural phenomenon: juhyo, also called snow monsters. The trees are naturally covered with snow and form almost human silhouettes. The forest at Jizo Sancho station and the Zao cable car are illuminated from mid-December to the end of February, giving rise to an astonishing spectacle of colorful snow monsters. From the slopes you can also enjoy fireworks.

Every year in February, 10,000 hand-painted candles illuminate Tsuruga-jo Castle and Oyaku-en Gardens. This tradition dates back to the fifteenth century, when Morinobu Ashina (1408-1451), lord of Aizu, encouraged the cultivation of lacquer trees. The sap was used for lacquer, and the wax from the fruit of the trees was used to produce candles, and this tradition still survives today, many centuries later. Because of the harsh winters in the region, devoted families paying respects to their ancestors put painted candles on graves instead of fresh flowers.

A former post town of the Edo era, Ouchi-juku is recognizable thanks to its particular roofs made of straw. Nestled in the hollow of the Shimotsuke Kaido road, it was a step on the way to the Aizu Domain. In 1981, it was designated as a 'National Traditional Architectural Preservation Zone' (dentoteki kenzobutsu-gun in Japanese). Many lanterns illuminate the village during the snow festival, and you can also enjoy traditional costumes, dancing and various activities such a noodle eating contest! The highlight of the show is of course the fire ceremony that takes place on the first night of the festival: men in loincloths light the lanterns and fireworks takes place. Don't miss the local culinary specialty negi-soba, noodles with leeks.

Picture huge balloons rising in the sky, to melt into the dark night like celestial candles; all accompanied by fireworks! Welcome to Kamihinokinai festival! Each year, a hundred 8-meter balloons - more like hot air balloons - are dropped into the night sky. Traditionally, the release of balloons was an opportunity to pray for good harvests and good health, but now people wish for good results in exams and many other things, similar to Tanabata! 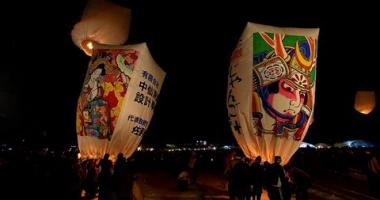 If you can't get to Sapporo, why not take advantage of the snow in Iwate Prefecture, in northern Honshu (the main island of Tokyo)? The Iwate Snow Festival is one of the five biggest festivals of the season in the Tohoku region. At Koiwai festival, let yourself get lost in a labyrinth of snow! Huge snow toboggans, snow huts where you can try the dish "Genghis Khan" (a kind of mutton-based stew) and staged performances are all on offer. You can even join in with the ice sculpture contest, if you like. And no Japanese festival would be complete without the traditional fireworks. At night, the ice sculptures are also illuminated.