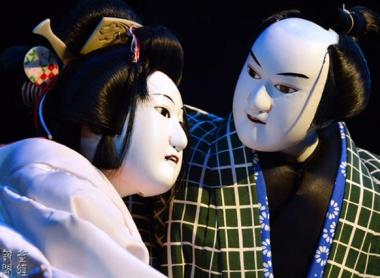 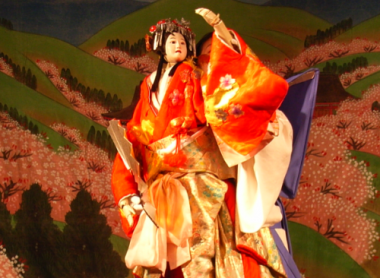 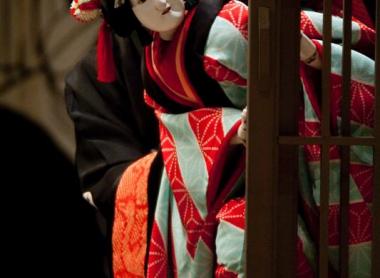 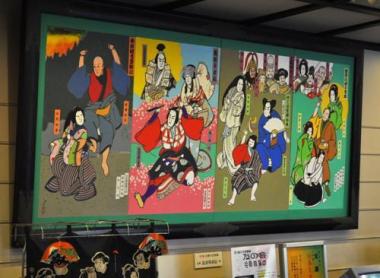 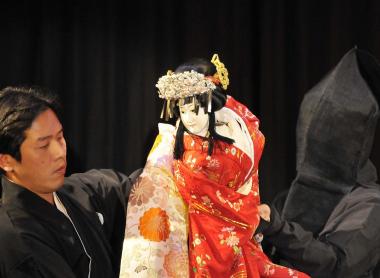 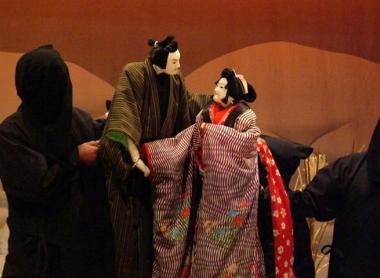 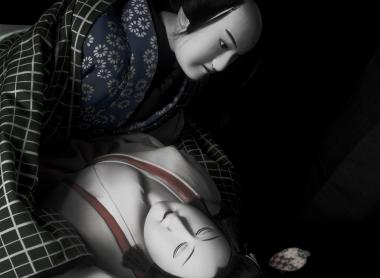 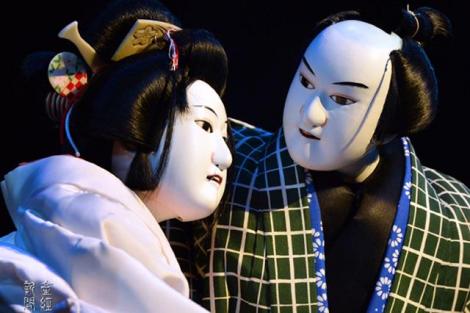 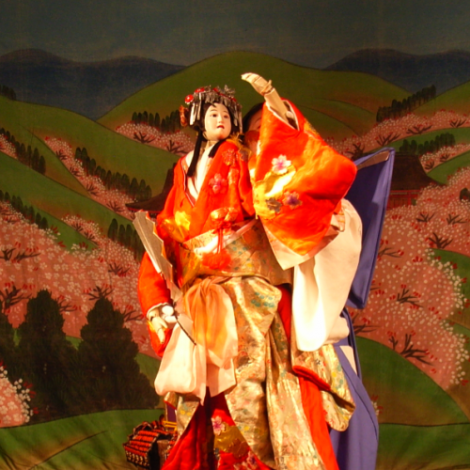 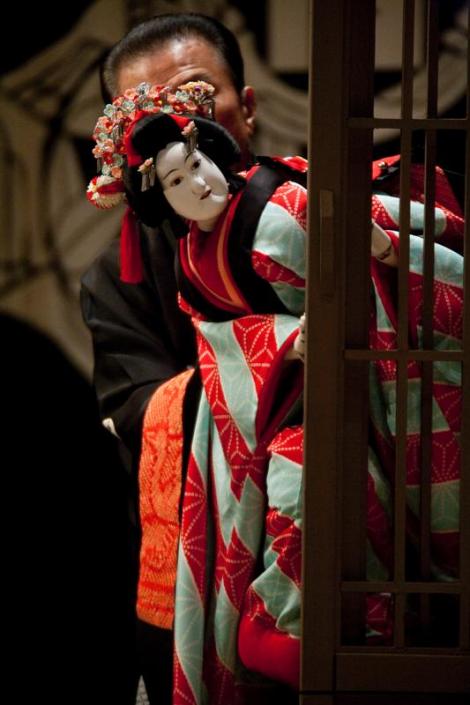 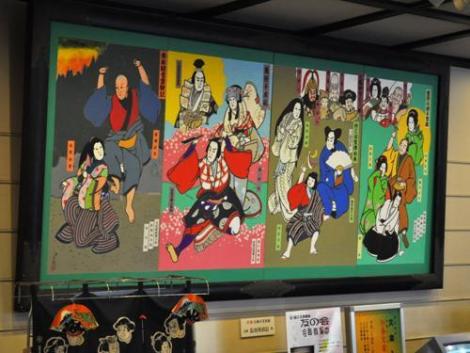 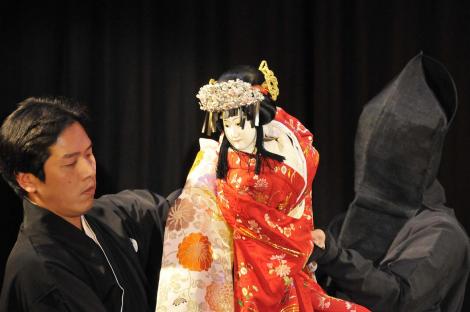 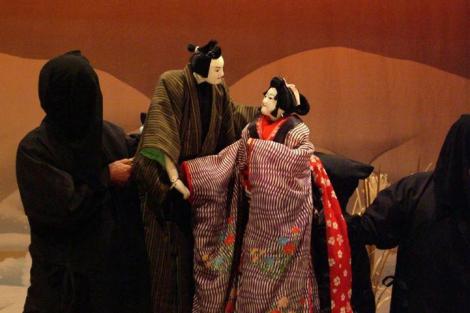 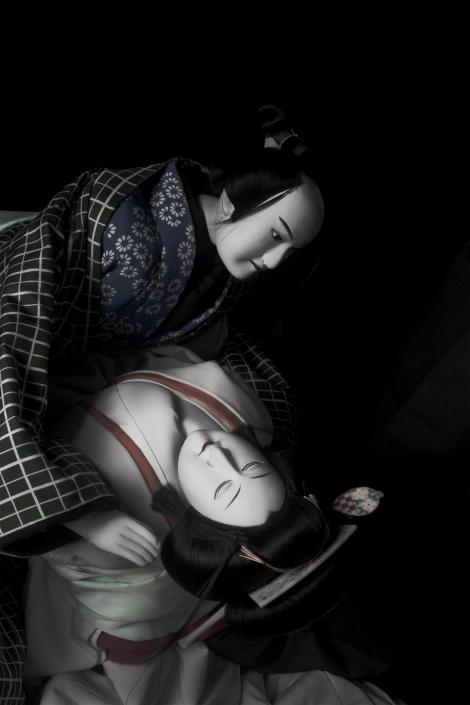 The acts and gestures

Forget the little puppets, and forget inhibitions about not understanding a word of performance art in Japanese. The Bunraku play can help you conquer your fears.

The man looks at the puppet. He only focuses on it while the viewer's eyes have trouble getting used to the dark presence. While the room is pitch black, a form dressed in black with pronounced moves, the puppet master, leads the dance, and the one whose face is "discovered, smooth, clear, impassive, cold like a white onion that has just been washed" (Roland Barthes, The Empire of Signs, citing Basho Matsuo). This white onion meets another white object, the face of a miniature wooden hero.

In the seventeenth century, ningyo joruri, literally "narrative art with dolls", was born. During the Genroku era (1688-1703), two men brought to life this art form, and it is still represented and performed in the same way. The musician and singer Gidayu Takemoto (1651-1714), who enriched the already existing recitation style, performed under the name Gidayu. An equally famous playwright and director Monzaemon Chikamatsu (1653-1724) brought a psychological dimension to the characters and the narrative, giving so much depth to the literary art of ningyo joruri that he created his own genre, sewamono.

It was under the Meiji era (1868-1912) that bunraku, which until then had been under the name of ningyo joruri, received its name from Bunrakuken Uemura, a theater established in 1872 in Osaka, the Bunrakuza. In the twentieth century, bunraku still faced an uncertain future: the noble spectacle knows a daily darkness. In 1955, the State recognized bunraku as an important cultural heritage. A National Conservatory dedicated to the art was created in 1963 and the National Bunraku Theater in Osaka opened in 1984. In 2003, Unesco named it an Intangible Heritage of Humanity.

"A total spectacle, yet divided," Roland Barthes in The Empire of Signs

Three puppeteers operate in a kind of passageway slightly drawn back. The uncovered master controls the head and right arm, and his first assistant, covered in black from head to toe, handles the left hand, while the second, often lying on the ground, move the feet and play with the clogs. The dolls measure about two thirds of the human body. Secondary characters, still complex mechanisms, can be handled by a single puppeteer.

Offset to one side of the stage, a musician brings the right note, an emotion, a voltage, a sigh to accompany the movements of the puppet. He plays the shamisen, a three-stringed instrument. Another performer, reciting screams, shouts, whispers, sings, makes the masculine sound of a samurai or the whisper of a courtesan. He doesn't read the lines, he lives them.

Lover, warrior, monk, priest, or adventurer, hero or historical figure ... the puppet seizes a role just as it is seized itself. It is the heroine, the center of attention of all the minute precautions. It is made of small gestures that give it life. It thrives on the human sacrifices which humanize. It is the brush, the paint, and the canvas of a painting. This is what artists simultaneously create to present bunraku. The plot is painted, the movements are drawn, the sound is carved. Nothing is left to chance, the precise harmony leaves no room for improvisation.

Between the stage and the story, three to five artists give life to an inanimate body. Yet every gesture, every word, every sound, and every manipulation is broken down so that the human consistency is lost while forming a homogeneous group, promoting the distancing effect so dear to Bertolt Brecht. With bunraku, no catharsis or self-pity, no identification or approximation, only what is born in the viewer: one attends, but the hermetic techniques that are far enough away that one discovers from the inclination to identify with the characters or the plot.

An orchestra can provide additional sounds. Behind the scenes, the puppets are carefully coiffed and dressed, another art in its own right since the dyes and the clothes of the materials change over time, the sex of the character or his social class ...

The puppet becomes human and humans become puppets, their smooth and precise movements giving birth to an almost mechanical perfection. What's less surprising then to see the most famous renowned artists "Living National Treasures" for their talent and mastery they have showed for so long.