Ryogoku Station on the JR Sobu Line serves the Ryogoku (sumo) district on the east bank of the Sumida River, in Tokyo's Sumida ward.

Ryogoku Station is in the east Tokyo district of Ryogoku, which is best known for being the heartland of Japanese sumo wrestling.

Ryogoku Station is on the above-ground JR Sobu Line. The code name for this station is "JB 21."

Ryogoku Station has only two exits: an East Exit and the main West Exit. The concourse of the West Exit of Ryogoku Station is dominated by huge photographs of famous sumo wrestlers, leaving you in no doubt that you have truly arrived in Ryogoku. Further reassurance that you've come to the right place is to be had in the form of yukata-clad sumo wrestlers in and around the station, from surrounding sumo stables.

Ryogoku Station contains the Ryogoku Edo Noren mall in its northern half. This open, three-story space combines tourist information about Ryogoku and environs, on the first floor immediately upon entering, with various Japanese-style dining opportunities throughout. There are a dozen restaurants in all. There is also a Ryogoku-themed souvenir store. The focus of Ryogoku Edo Noren is a central dohyo, or sumo ring, on the first floor as an acknowledgment of the area's strong sumo wrestling heritage. The "Edo" in the name is the old name for Tokyo, and evokes the area's long history, on display in the nearby Edo Tokyo Museum.

Ryogoku Station opened in 1904 when the Sobu Line was extended from further east, but at that time was called Ryogokubashi ("Ryogoku Bridge"). It became "Ryogoku" in 1931. The current station building dates from 1929, which accounts for its art deco-inspired design. The Toei Oedo Line's Ryogoku Station, a short walk from the East Exit, opened in 2000. 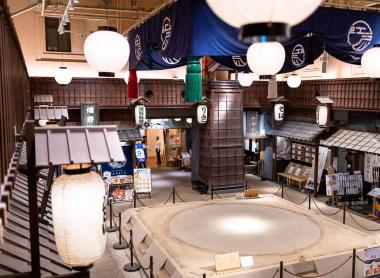 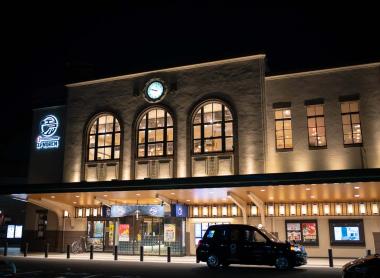 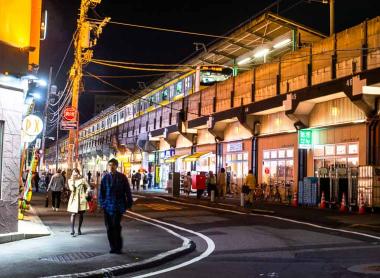 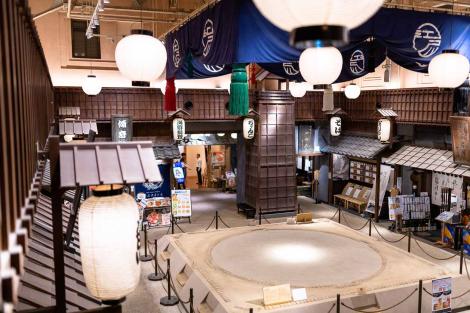 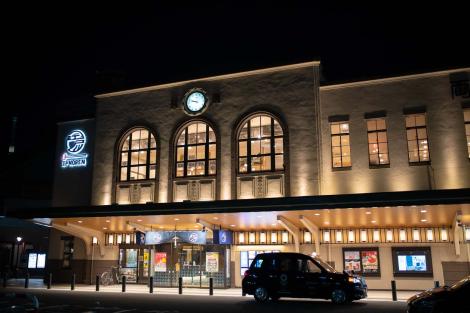 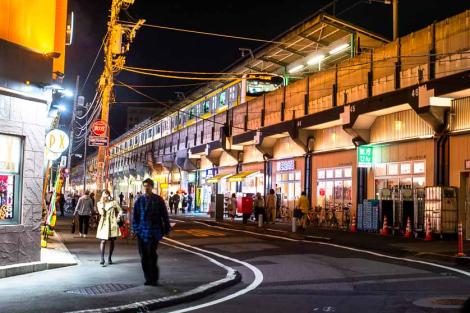 7 am to 9 am is the peak time, with a train departing about every 2 or 3 minutes westward, and about every 3 or 4 minutes eastward.

Ryogoku Station being on the JR Sobu line, all trains that stop here stop at every station. The nearest station with an express service is Ochanomizu Station (change to the orange Chuo Line train) three stations west, and Kinshicho station (change to a Sobu Rapid (kaisoku) or Commuter Rapid (tsuukin kaisoku) train), one station east.

Ryogoku Station on the Toei Oedo Subway Line (Exit A4) is about 350 meters to the east of JR Ryogoku Station, from the East Exit.

The Kokugikan indoor stadium, best known for its sumo tournaments and as a concert venue, is 150 meters north of the West Exit of Ryogoku Station.

The Edo Tokyo Museum is 350 meters (4 minutes walk) from the West Exit of Ryogoku Station.

The Kyu-Yasuda Tei Garden is 3 minutes walk north from the West Exit, just past the Kokugikan stadium. At the north-west corner of the garden is the Japanese Sword Museum - a five-minute walk from the West Exit.

The Ryogoku Indoor Swimming Pool is just north of the Edo Tokyo Museum - a 7-minute walk from the East Exit.

Asakusabashi Station (not to be confused with the popular tourist destination that is Asakusa Station) is one stop west on the JR Sobu Line, just across the Sumida River. Two stops west is Akihabara Station, where you can transfer to the Yamanote Line that loops around Tokyo.

From $52 per person
Activity

The Oedo Line operated by Toei is a large subway loop line around Tokyo that also has a long branch line to its north-west.