Nagatoro is a scenic town in the mountains of western Saitama Prefecture and is a popular spot for Tokyo day trippers looking for hiking, river boat tours and wild water sports.

Nagatoro is a small but scenic town (population 8,000) deep in the mountains of western Saitama Prefecture. Located about 20 minutes north of Chichibu by train, Nagatoro is a popular spot for Tokyo day trippers looking for hiking, river boat tours and wild water sports in largely unspoiled nature.

The whole town of Nagatoro has been designated a prefectural nature park and preserve. 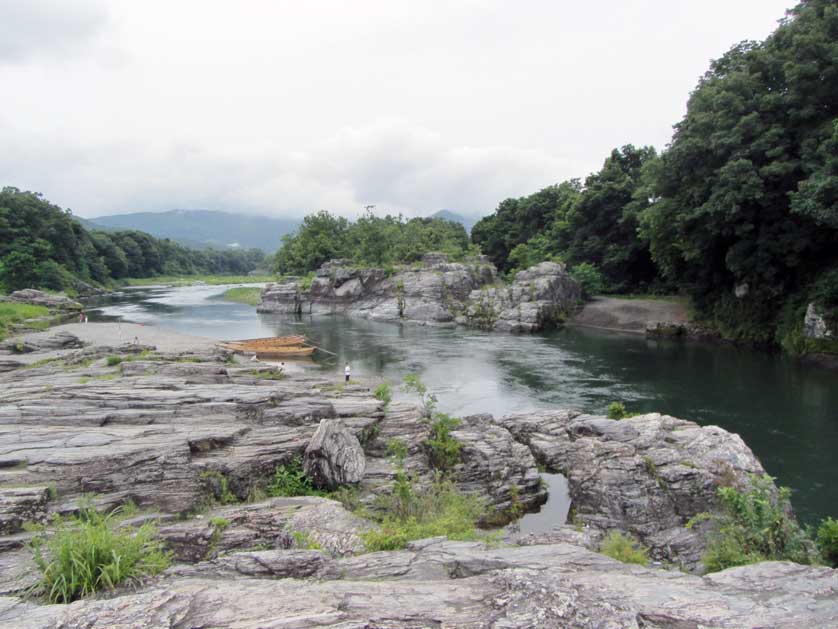 Nagatoro can easily be reached via the small private Chichibu Railway Line, it is located between Chichibu and Kumagaya. When traveling from Chichibu, walk from Seibu Chichibu Station to Ohanabatake Station (about 5 minutes), then take the train towards Kumagaya or Hanyu.

Ohanabatake Station is a small, historic wooden building. PASMO and SUICA cards are not accepted here. You must buy a Chichibu Railway ticket from the vending machine.

Nagatoro Station is a small, historic and wooden building as well, a type of old-style train station you will find today only in the furthest periphery of the Tokyo metropolitan area. 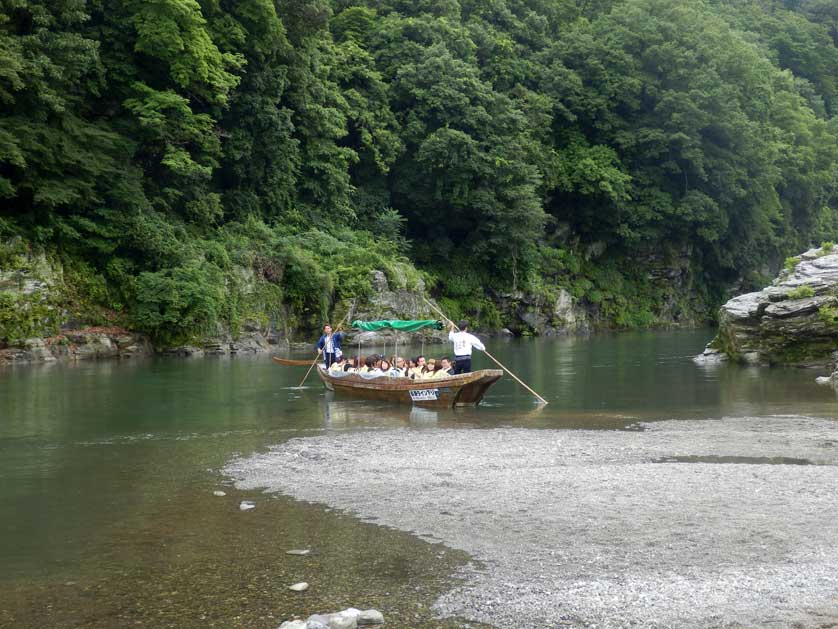 Nagatoro tour boat - the water is shallow here and the boat operators use long poles like on punts in Cambridge, England

River boating is serious business in Nagatoro. After a 5 minute walk through Iwadatami Dori, Nagatoro's main shopping street, you arrive at the foot of the Iwadatami rock formation. There is another booth selling tickets for the river cruises.

The river cruises are done by tour boats carrying about 20 passengers and steered by two men with long poles. They travel along high rock walls and through some excitingly rough waters.

At the end of the trip down river, the passengers are brought back to central Nagatoro by bus. The boats are lifted from the river by crane and transported back to their starting point by truck. Those boats are built to go down river, they can't make the trip back on their own. 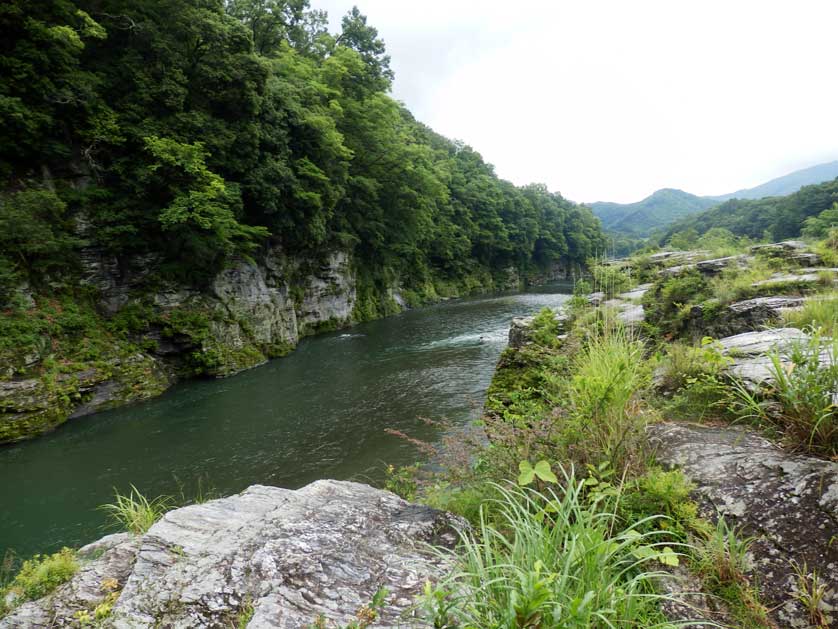 Arakawa River at the Iwadatami 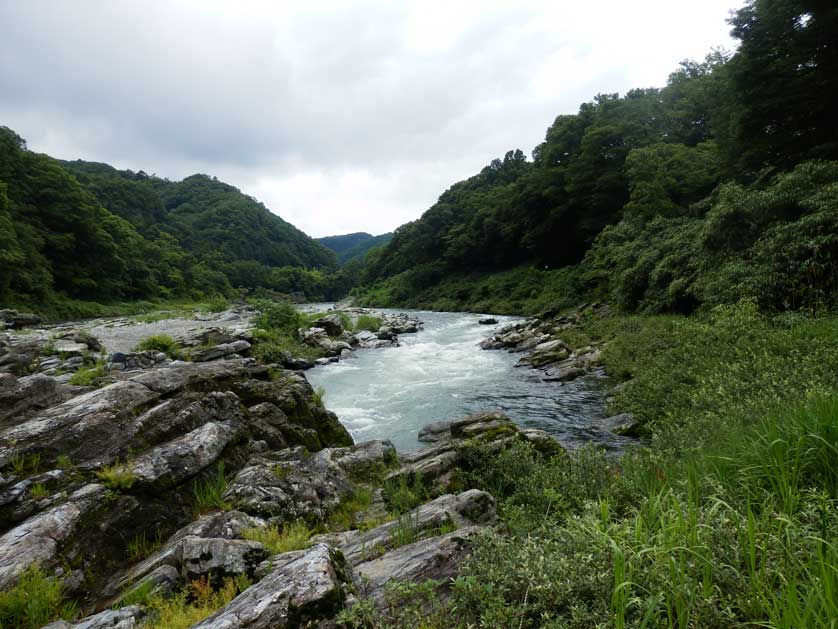 While usually crowded at its fringes close to the tour boat harbor, hiking out further into the Iwadatami will lead you to lonesome spots with actual wildlife present. Be careful of snakes. 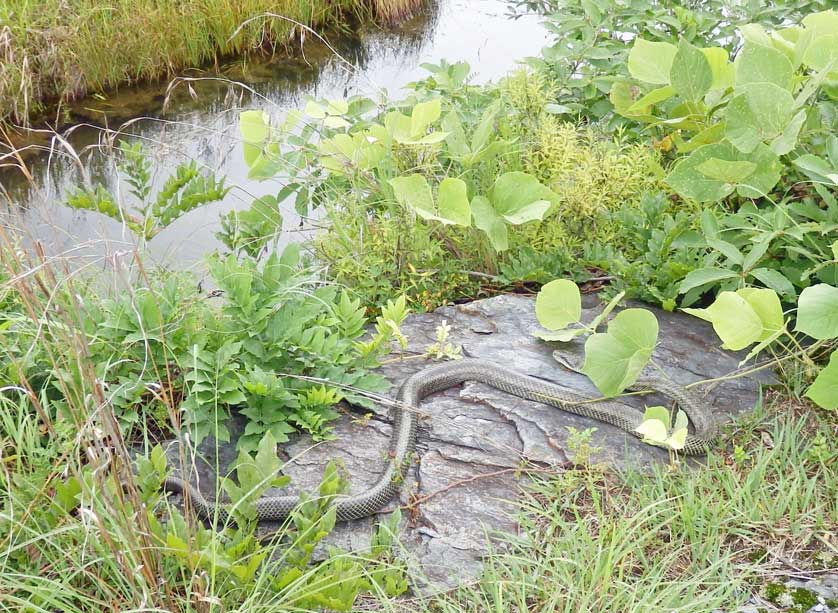 The Japanese rat snake, the snake most likely to be encountered here, might be large but it is not poisonous. I would not want to guarantee the same for other snakes out to catch some sun on the rocks.

From the northern end of the Iwadatami rocks, you can see the particularly wild rapids of the river. They are frequently used for white water rafting, kayaking and similar water sports.

On August 15 each year this stretch of the Arakawa River close to the Iwadatami rocks is the venue for the colorful Funadama Festival when lantern boats called Mantosen parade on the water, followed by a spectacular fireworks display.

Back at the foot of the Iwadatami Rocks, you might want to check out the stores of Iwadatami Dori Shopping Street. As usual in Japanese tourist shopping streets, almost all the products on sale are local. In the case of Nagatoro, the local products are soba and udon noodles, pickled mountain vegetables (the sweet beans are highly recommended) as well as small, sweet, sun-dried tomatoes. Locally grown walnuts are another specialty of Nagatoro. 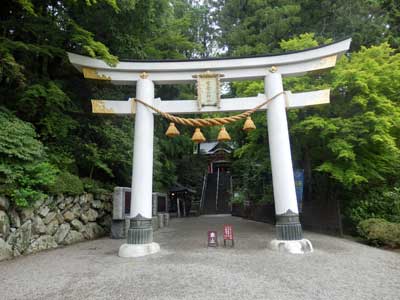 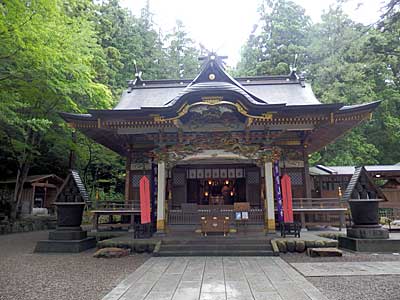 Walking past the train station towards the mountains leads you towards the Hodosan Mountain Shrine.

The Hodosan (497m) is the mountain dominating Nagatoro and the shrine is situated at its bottom.

The Hodosan Shrine dates, according to legends, back to Yamato Takeru, the unruly son of Emperor Keiko (ruling Japan at about 100 A.D.) who turned out to be so violent that his father sent him off to the furthest regions of the empire to fight primitive tribes and to establish Shinto shrines. The latter, Yamato Takeru did with great fervor. Takeru is said to have founded many shrines in the Kanto area, including Chichibu Mitsumine Shrine and Tokorozawa Shinmeisha.

The legend about Yamato Takeru's founding of the Hodosan Shrine tells, in short, that Yamato arrived in 110 A.D. with his warriors at the foot of Hodosan, found a well there (at the location of the current shrine, the well is still there and can be visited), got refreshed from the well's water and then decided to climb the mountain.

While climbing up, a forest fire came raging towards Yamato Takeru and his men. In the last second, black and white ghost dogs appeared and put out the fire, saving the climbing party's life. Then, the ghost dogs vanished without a trace.

To thank and honor those ghost dogs, Takeru built Hodosan Shrine. Prayers at the shrine are said to provide safety for the family and protect against fire.

The shrine itself is a beautiful mountain shrine with the current buildings dating from the Edo era. They are richly decorated with elaborated carvings.

The website also gives details on the manifold and often unique celebrations taking place at the shrine over the year. 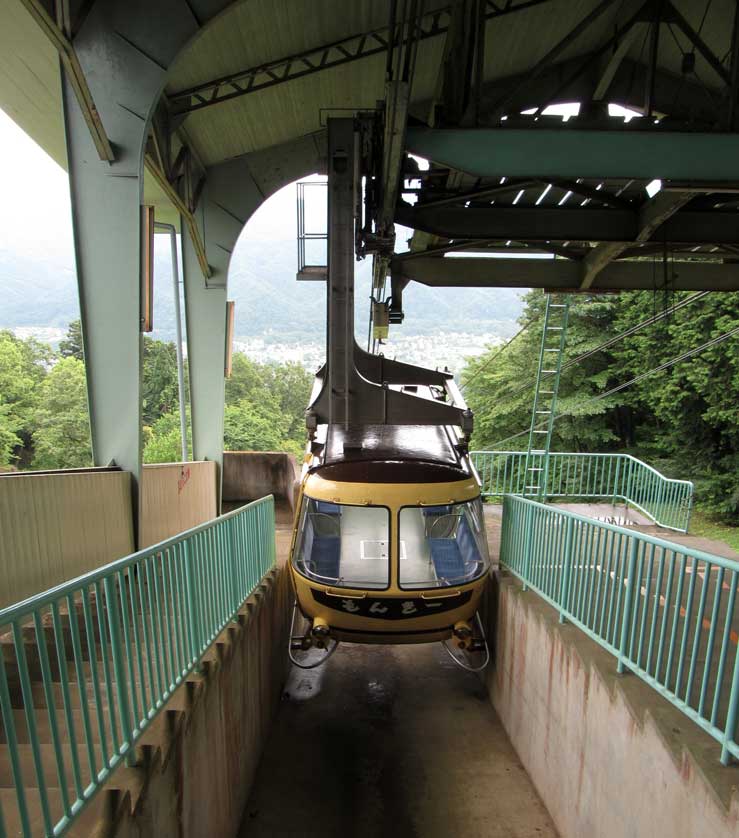 You need to walk out of the main stone gate at the road entry of the shrine and take a sharp turn to the right to get on the road towards the actual mountain. After an about 5 minute walk you will reach a large parking area.

From there, you can either enter the hiking path up to the top of Hodosan (it's a 2.7 km walk, a signs says) or you can take the gondola ('ropeway' as it's called in Japanese) up the mountain.

The ropeway trip is rather short but provides, weather permitting, great views towards Mount Buko near Chichibu.

Although the Hodosan is not particularly high (497m), from the viewing platform outside the upper ropeway station you get a spectacular view towards the much higher mountain ranges of nearby Gunma Prefecture.

It's a 5 minute walk from the ropeway station to the top of the mountain and the whole walk leads through orchards of Japanese plums and a variety of different roubai (Japanese Allspice) bushes.

Those orchards are most attractive in winter. The first bright yellow roubai blossoms will appear in December, the other roubai bushes will follow suit in January and in February, the Japanese plums will be in bloom. On a bright day in winter, you can experience the impressive landscape of the snow-covered mountains in the background with the colorful blossoms right in front.

While the actual top of Hodosan is far from spectacular (there is only a sign indicating top and height in the midst of a forest), the nearby Hodosan Upper Shrine might prove more interesting.

This small mountain shrine was, according to legend, also founded by Yamato Takeru. During the main hiking seasons, vendors serve sake, fried ayu (a salted mountain river fish) and other local specialties in front of the shrine.

Visitors with children might be interested in the Small Animal Zoo, a short walk from the upper ropeway station. The animals are not exactly of any rare species but they are cute anyway. You will find monkeys, deer and the like.

Nagatoro is an excellent place to find really good soba and udon noodles made from locally grown buckwheat. Try any of the old restaurants around the train station, they all continue serving noodles following age-old family recipes. Those mountain folks know their noodles and they definitely know how to prepare a delicious broth going with them. 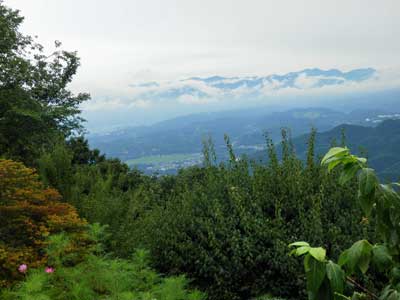 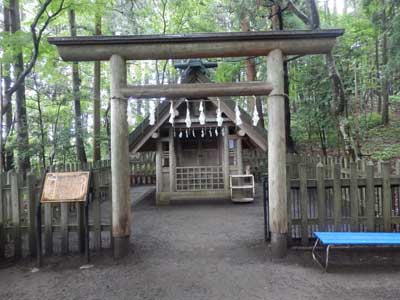 Shrine on the summit of Hodosan

From Ikebukuro Station: Seibu Chichibu Line to Seibu Chichibu, walk to Ohanabatake Station (5 mins), take the Chichibu Railway in direction Hanyu or Kumagaya to Nagatoro Station  (about 110 minutes in total)

Please note that the Chichibu Railway does not accept PASMO / SUICA cards. 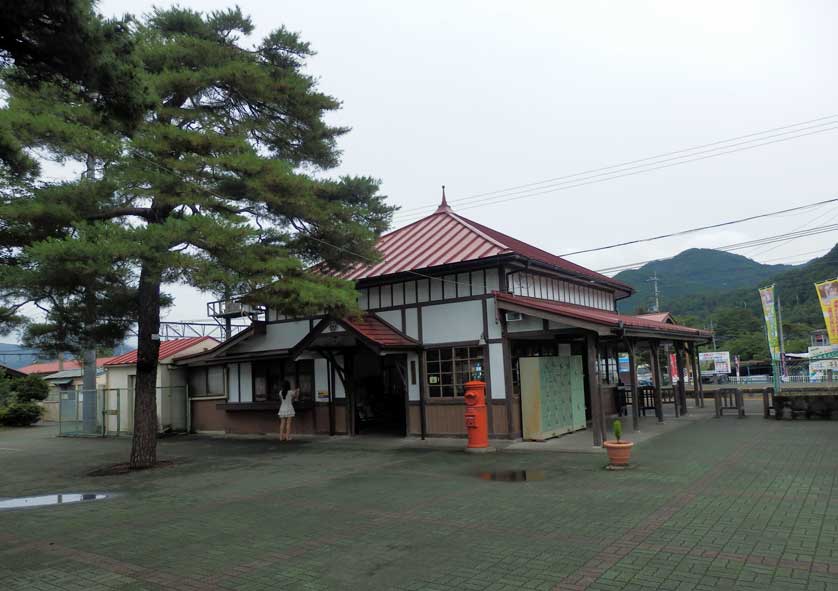