Tobishima Kaido is a 46 km cycle route that crosses the Aki Nada Islands via seven bridges, and offers some wonderful coastal scenery and seascapes with little traffic.

The Shimanami Kaido, the 70 kilometer cycle route that crosses from the main island of Honshu over to Shikoku via a series of islands connected by bridges, is now world famous and very popular, but not well known at all is a similar cycle route not too far away, the Tobishima Kaido, which, with a short ferry ride, also connects with the Shimanami Kaido.

This 46 kilometers route crosses the Aki Nada Islands via seven bridges, and while the bridges are not so big or as dramatic as on the Shimanami Kaido, the Tobishima Kaido does offer some wonderful coastal scenery and seascapes with much less traffic, and some interesting historic sites along the way. 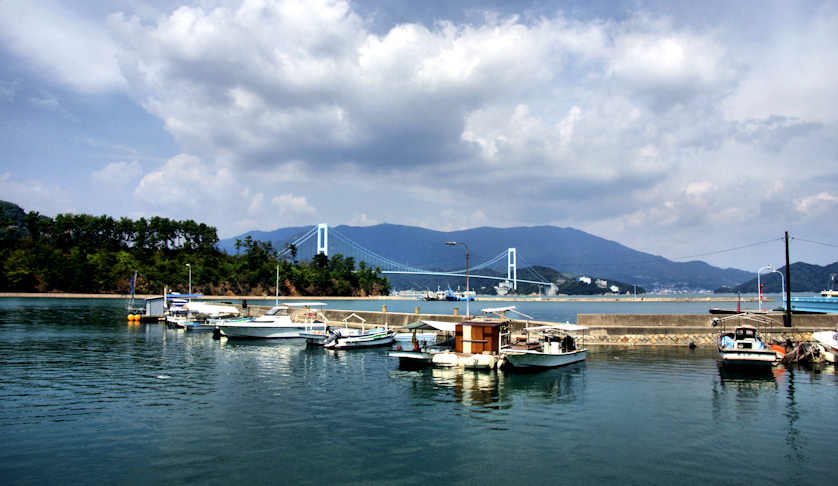 The Aki Nada Bridge seen from Sannose Port on Shimokamagarijima

The Aki Nada Islands begin near Kure on the Hiroshima coast and head out into the Inland Sea before curving back towards the coast at Takehara. The route ends at Okamurajima Island, and from here you have basically four choices. You can return to the mainland back across the islands and take the opposite coast of each island that you took on the way out.

You can take a short ferry ride across to Munakata Port on Omishima Island and then join the Shimanami Kaido heading north to Honshu or south to Shikoku. You can take a ferry to Imabari on Shikoku and then head across the Shimanami Kaido, or you can take a ferry to Osaki Kamizima Island, the largest of the Aki Nada Islands and not connected by bridge, and from the top of the island take another short ferry ride to Takehara in Hiroshima.

There are 5 "cycle stations" along the route where you can borrow tools, pumps etc, and there are numerous places to eat. There are also plenty of minshuku, ryokan, and campsites for those wishing to spend a relaxing and fun couple of days. 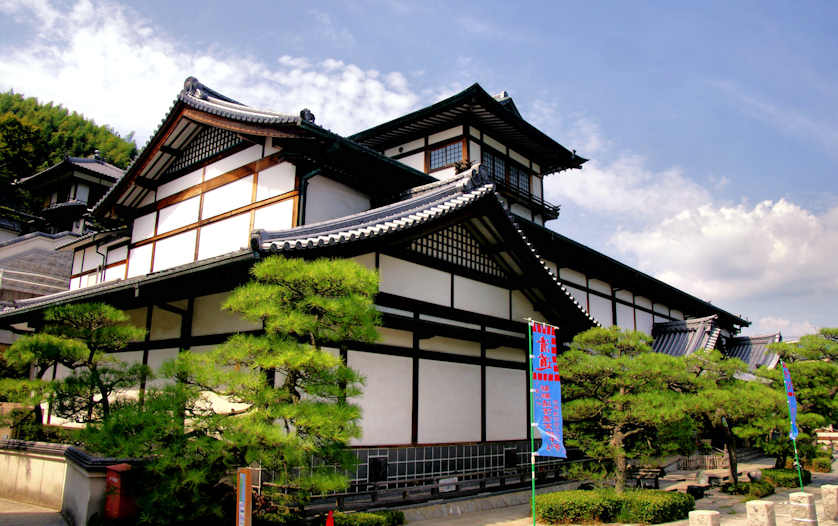 The biggest bridge is the Aki Nada Bridge which crosses from the mainland near Nigata. For cyclists or pedestrians it is toll-free. The first island, Shimokamagari, has parks, beaches, and several tourist sites you can visit. It was a major stopover point for elite travellers heading through the Inland Sea up to Osaka and Kyoto.

Daimyo (feudal lords) on their way to Edo (Tokyo) would stop here as well as the Dutch from Dejima in Nagasaki, but the most famous guests were the official delegations from Korea, of which there were more than a dozen during the Edo Period. The Shotoen Museum has displays all about their visits here including replicas of the lavish feasts they had.

The museum also has several other building with different exhibitions. Not far away is the Rantokaku Art Gallery that exhibits modern Japanese painters of the Nihonga-style like Yokoyama Taikan and Heitaro Fukuda. Not far away is an annex to the Rantokaku, an insect museum, and an Edo Period Tea House. Shimokamagari is worth a visit even if you're not cycling the kaido. 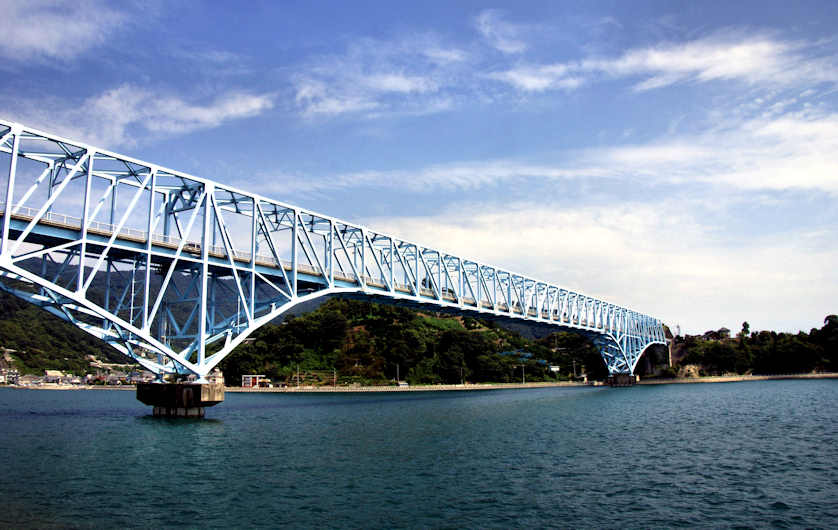 The Kamigari Bridge connects to Kamikamagari Island, much larger than Shimokamagari. The shimo and kami mean lower and upper, which in this case the upper means closer to Kyoto. The road along the south coast has few settlements and hugs the coast up against steep hillsides planted in citrus. At the far end of the island is Kenmin no Hama, a resort area with lovely golden sandy beaches that are ranked in the top 100 in Japan and are generally considered to be the best in all of Hiroshima Prefecture. With a hot spring, observatory, fruit picking, other sports areas, and accommodation, Kenmin no Hama is a popular spot, especially in the summer. 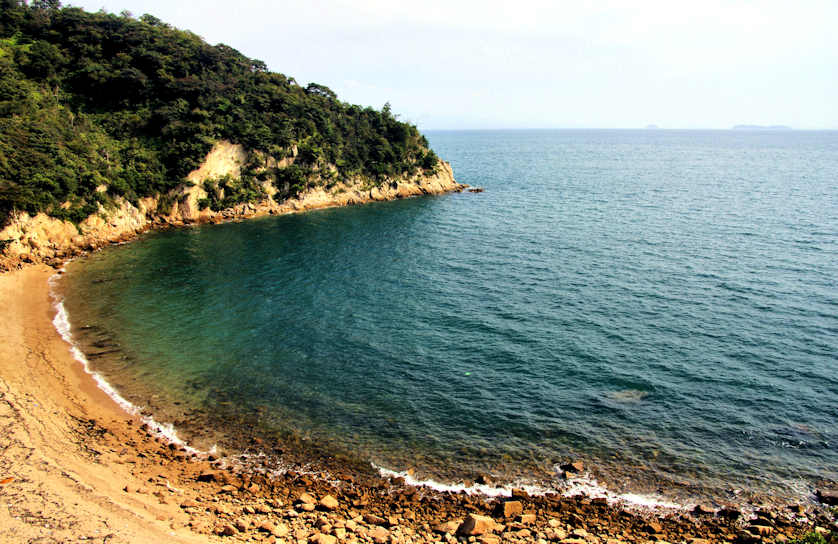 The southern coastline of Kamikamagari Island 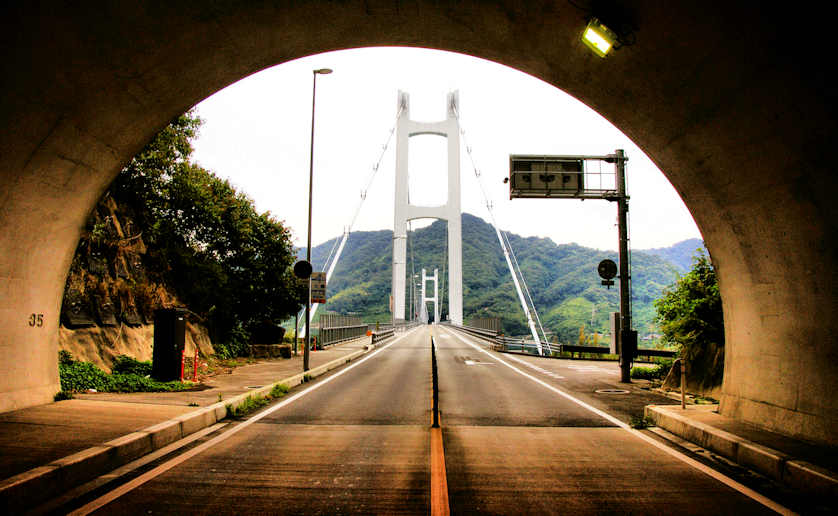 The Toyoshima Bridge connects to Toyoshima Island, the smallest island so far. Toyohama, the main settlement is a pretty fishing port with minshuku and the Toyohama Bridge over to Osaki Shimojima.

As with Kamikamagari, the road along the southern coast of Osaki Shimojima has hardly any settlements and some great views across to some smaller islands and Shikoku. The jewel in the crown of Osaki Shomojima is the old port town of Mitarai in the southeast corner. In a sheltered spot that was perfect for boats to lay up and wait for favorable tides and winds, Mitarai is a little slice of a time gone by. 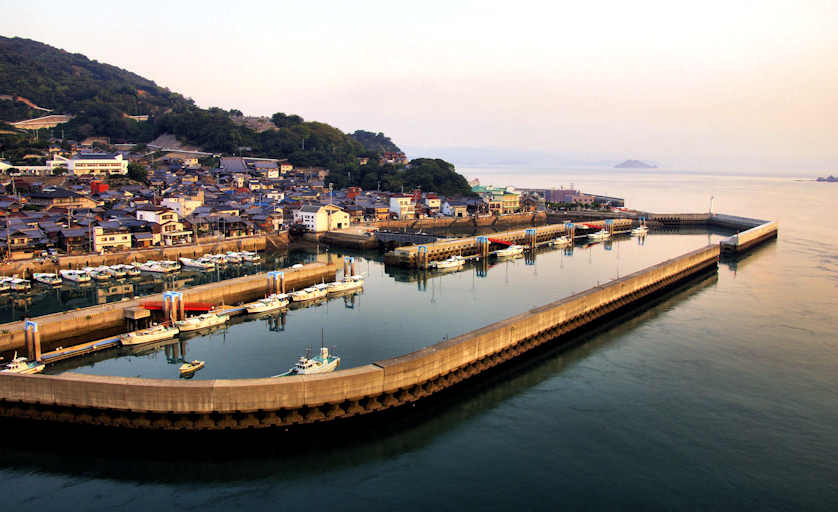 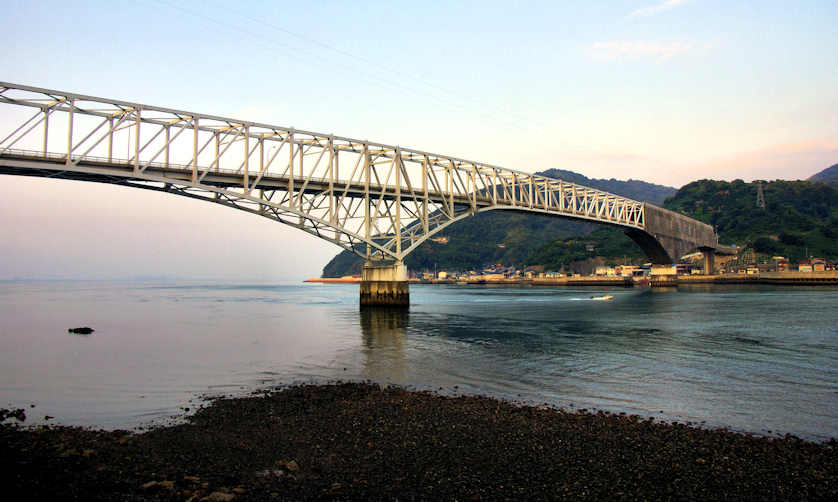 The narrow streets are filled with historic building from centuries ago and the whole area is listed as an Historic Preservation Area. Old shrines, storehouses, merchants quarters, and even a 1930's theater, but what is most intriguing is the evidence of the main service the town offered the sailors - female company.

There were a massive number of "tea houses" which in plain English means brothels. Long after steam power took away the main reason for boats to stop here the port flourished and one of the biggest "tea houses" is now open to the public, though they no longer serve tea! Nearby the ferry across to Osaki Kamijima departs. Mitarai is well worth the effort needed to visit.

From here the last three bridges connect across two small, uninhabited islets to Okamurajima where the Tobishima Kaido ends and you can take a ferry to either Omishima or Imabari.

The Tobishima Kaido begins with the Akinada Bridge about halfway between Nigata Station and Aki Kawajiri Station on the JR Kure Line between Mihara Station and Kaitaichi Station. From Hiroshima Station the quickest journey time is around 50 minutes to Nigata Station with a change in Hiro.

There are buses from either Nigata Station or Aki Kawajiri Station across to Shimokamagari. There are limited bus services between the islands. 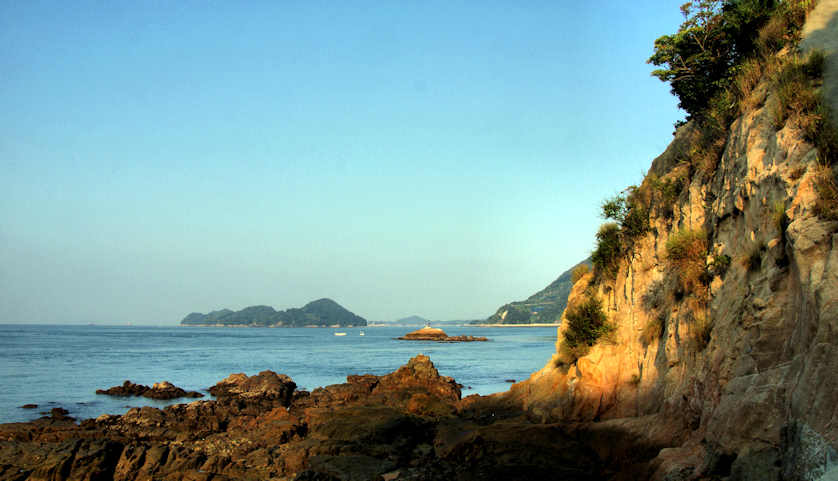 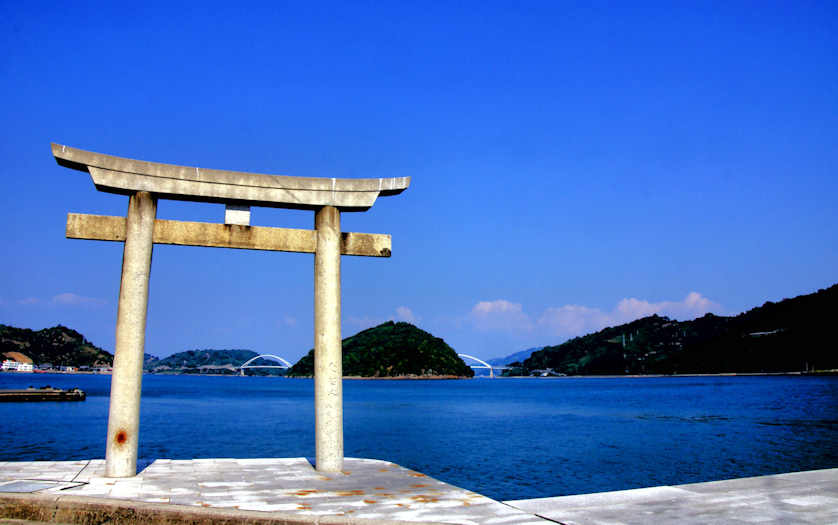