The Onomichi Temple Walk in Onomichi, Hiroshima Prefecture takes in the town's scenic temples including Senko-ji, Saikoku-ji and Jodo-ji.

Onomichi is a port on the Inland Sea about halfway between Hiroshima and Okayama. In historical times Onomichi was a major trading center and a stopping off point for marine traffic through the Inland Sea.

Much of the town clings to the steep hillsides and because it suffered little from bombing in the Second World War much of the older architecture survived, including 25 Buddhist temples that today are linked by a route known as the Onomichi Temple Walk. 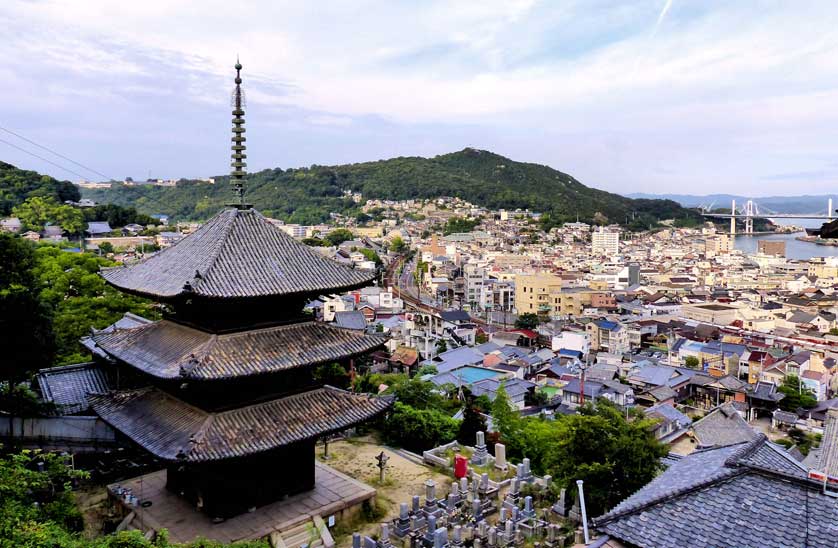 The route also intersects a "Literature Path" that commemorates the town's literary history as well as passing by numerous shrines and many of the town's other attractions including a number of museums.

The temple route is only 2.5 kilometers long and can easily be walked in a couple of hours though there is a fair bit of climbing involved, but it can easily take a whole day if you take it easy and visit everything else to be seen near the route. The route is marked by a colored path and maps can be picked up from the Tourist Information Office at Onomichi Station which is close to the start of the path. There are also plenty of signs.

The 25 temples vary from small, unmanned ones to large complexes of buildings including pagodas. The most famous of the temples, and the one most visited is Senko-ji. 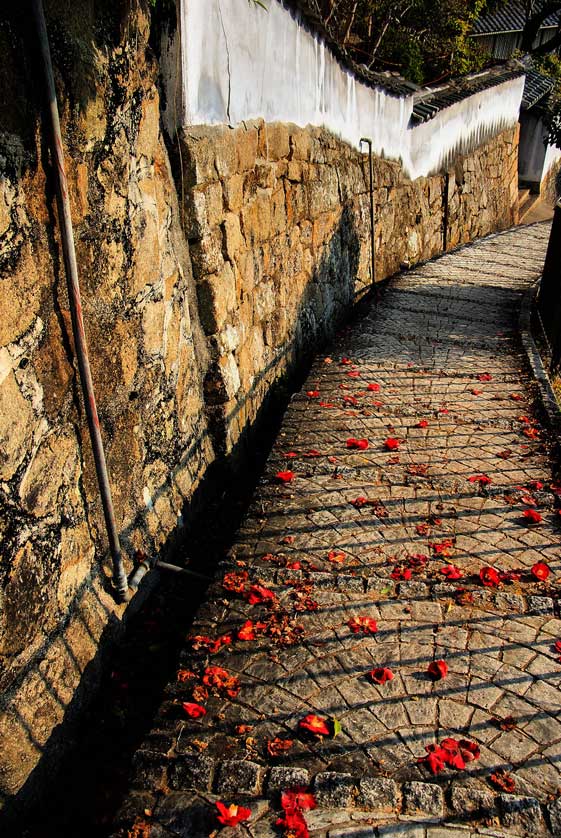 The most well known icon of Onomichi, its vermillion structures perched on the mountaintop overlooking the town, Senko-ji was, according to the legend, founded by Kobo Daishi in 806.

Built among massive rock outcroppings, the most notable being the 15 meter high Tama no Iwa, the "Jewel Rock" - topped with a sphere carved out of the rock. According to the legend this rock used to glow at night illuminating the surrounding sea. The temple is very popular on New Year's Eve when people gather to ring the temple bell.

Senko-ji's miniature Jizo are also very popular. Most people visit the temple by taking the rope-way that literally passes right over the temple and offers the best view of it. The park just above the temple is the favored spot for views over the town and surrounding area. 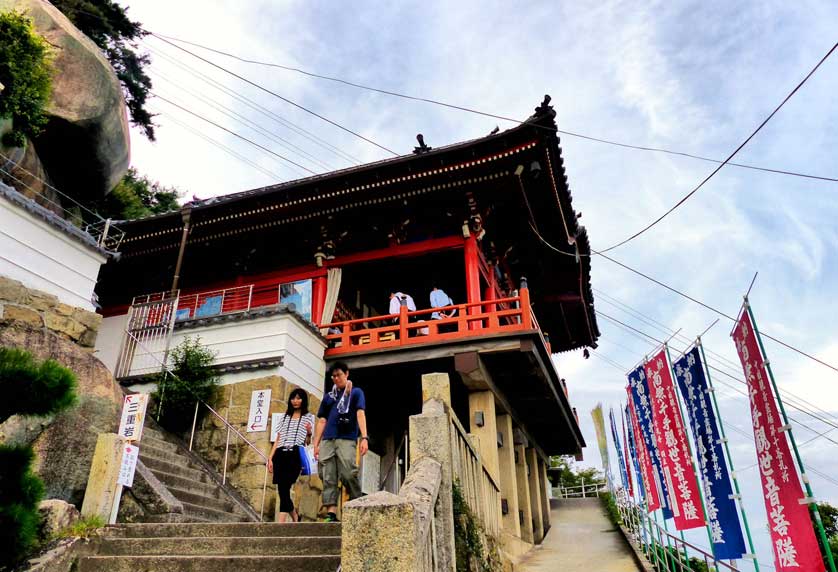 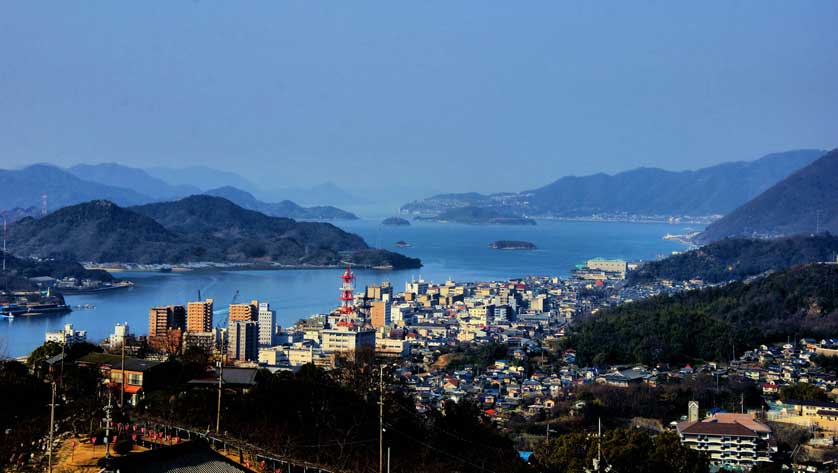 Saikoku-ji is the temple most apart from the rest, located up the narrow valley that divides the town. Saikoku-ji is approached up a long path passing through the Niomon (guardian gate) with its 2 meter high straw sandals hanging on either side. This is the largest temple in Onomichi and the legend says it was founded by Gyoki in 739. Both the main hall and the three storey pagoda are registered Important Cultural Properties. 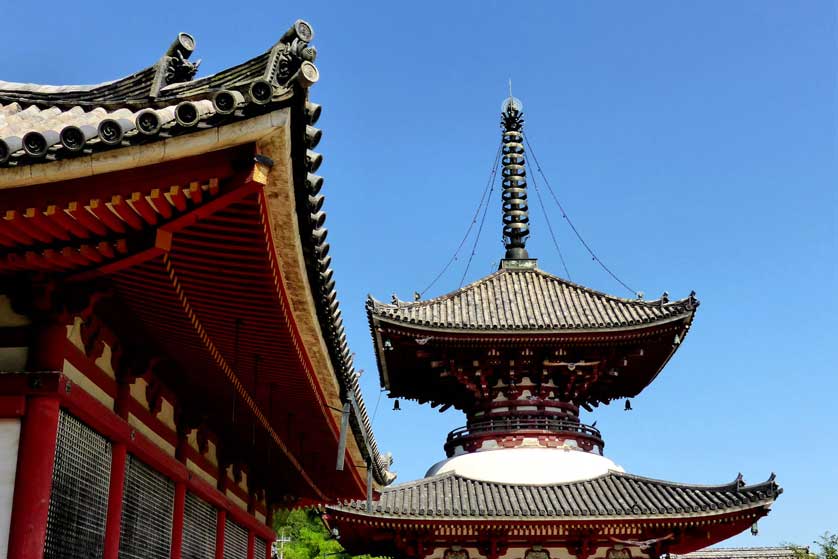 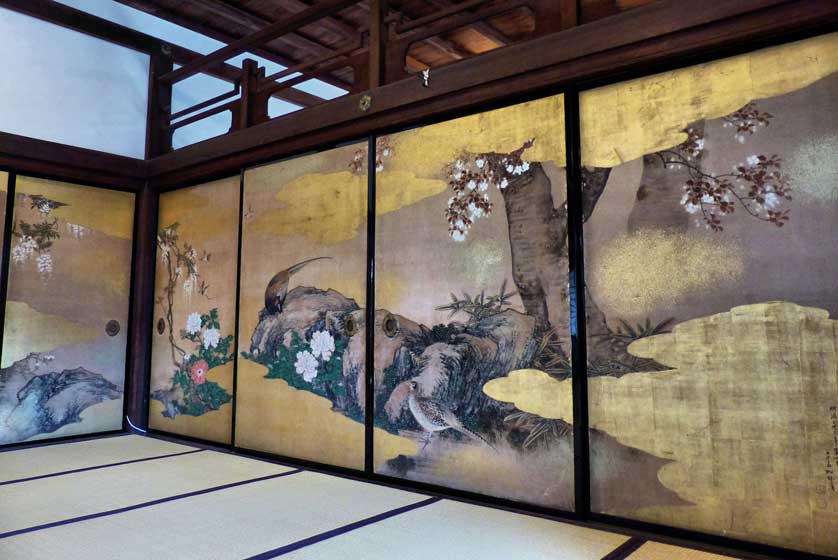 Jodo-ji is the final temple of the walk, located at the eastern edge of the town. The legend says it was founded under orders of Shotoku Taishi which would make it the oldest temple in the area dating back to the early 7th century.

Both the main hall and the 2 storey pagoda are National Treasures. Like all the temples on the walk, entrance is free, however by paying 600 yen you can get a 30 minute guided tour (9am to 4pm, in Japanese) into the temple buildings and see a lot of statues that are normally hidden from view, many of which are registered Cultural Treasures, as well as a lavish reception room with some marvelous paintings and painted fusuma, and finally a rather nice karesansui style garden.

Visitors to Onomichi should also visit Onomichi Castle, a replica castle erected in 1964.