Toyota was previously known as Koromo (挙母) until 1959, when the name of the city was changed to Toyota city to reflect the importance of the town's major employer - Toyota Motor Corporation. 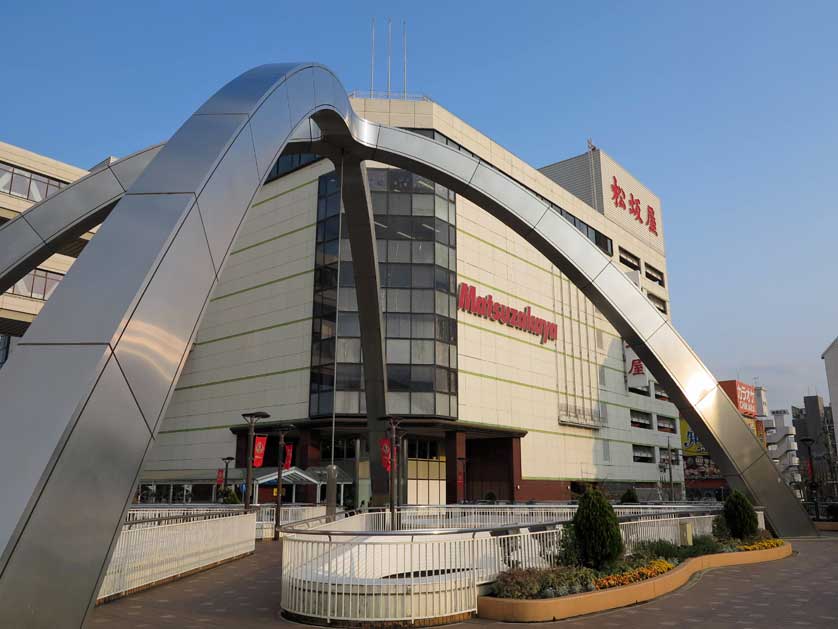 During the Meiji and Taisho periods the area was a major producer of silk until the decline of the industry in the 1930's when the heir to Toyoda Loom Works, Kiichiro Toyoda, set up the Toyota company's automobile manufacturing base here.

Toyota City does not appear in many tourist guides to Japan, but has a large number of foreign workers either working in Toyota's factories or researching at its facilities in the city.

The wider area is also home to a number of Brazilian and other South American nikkei - immigrants of Japanese descent who have come to the area to work in Toyota's car factories and other associated industries.

Toyota is a sister city of Derby in the UK, where Toyota has a factory and of Detroit, the original "Motown" in the USA. 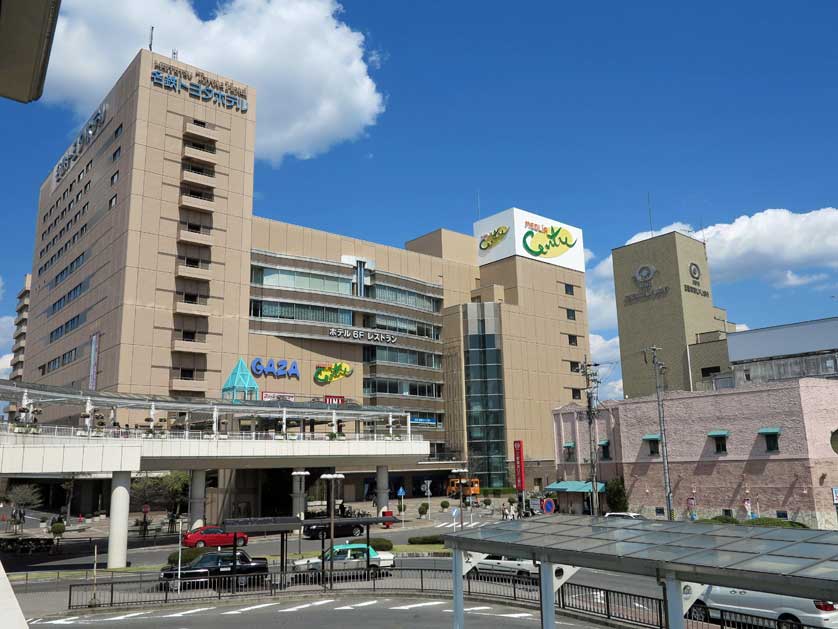 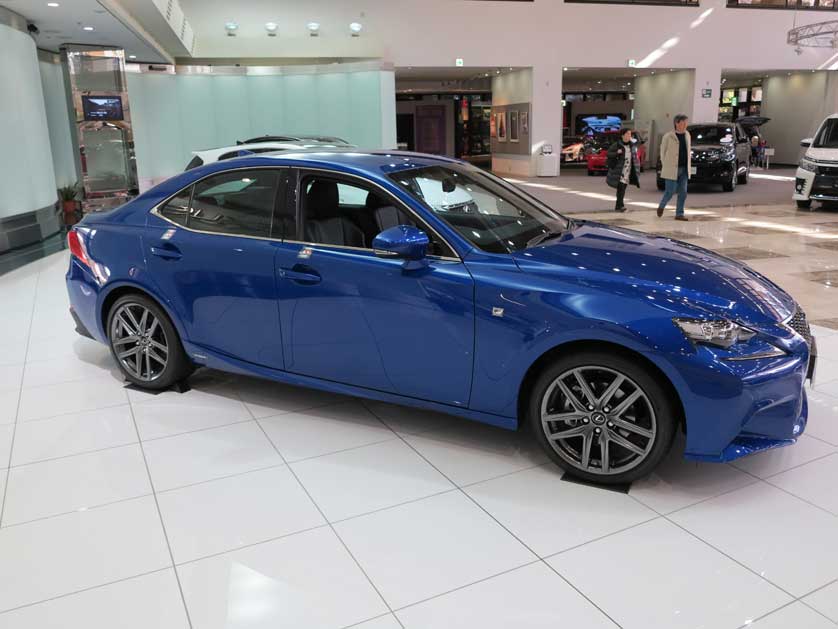 Toyota City has a number of interesting museums, many of them supported by the Toyota company. These include the Toyota Municipal Museum of Art, the city's premier museum, with a number of modern art exhibits and installations set in striking, contemporary buildings. The large, permanent collection includes works by both Japanese and foreign artists. Some of the art on display was produced by such names as Francis Bacon, Christo, Salvador Dali, James Ensor, Alberto Giacometti, Ida Shoichi, Kawai Kanjiro, Maeta Kanji, and Takahashi Setsuro. Toyota Municipal Museum of Art is a 15 minute walk from Toyota-shi or Shin-Toyota station.

Toyota Kaikan showcases the Toyota company's latest products and displays a history of the Toyota company. The Toyota Kaikan Museum has a large showroom where visitors can get inside the vehicles and a number of video displays and panels demonstrating Toyota's production process and the safety features in Toyota cars. The museum also has features on environmentally friendly cars, Toyota in society and Toyota's participation in motor sports. Toyota Kaikan is the starting point for tours of the Toyota car plant. Take an Aichi Loop Line train to Mikawa Toyota Station. 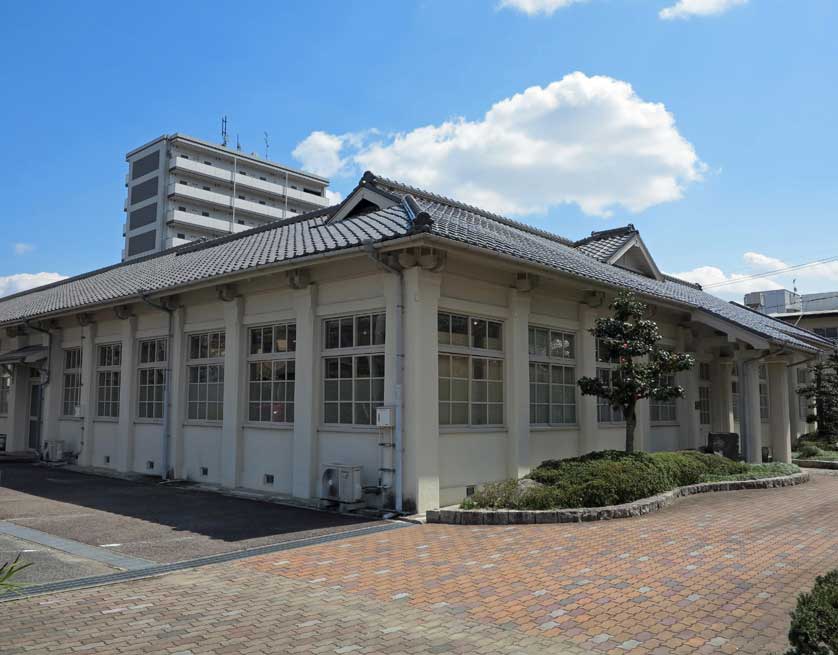 The free-admission Toyota City Museum of Modern Industry & Living is a short walk towards Toyota Stadium and is housed in the historic, former Sericulture Control Department building dating from 1921. The Toyota City Museum of Modern Industry & Living exhibits machinery once used in the silk industry and recreates typical tatami-rooms from the Meiji Period as well as everyday items from the post-war period such as early televisions, household appliances and electrical equipment.

The Toyota-shi Mingei-kan (Toyota City Folk Craft Museum) (Tel: 0565 45 4039) is also a free facility. The Toyota City Folk Craft Museum's many exhibition halls, in a parkland setting, display Japanese arts and crafts produced in the wider Toyota City area including dolls, ceramics, furniture such as wooden tansu chests, glass work and fabrics. Visitors can try their hand at producing crafts, and sample traditional macha green tea in a reconstructed tea house. The park around the Toyota-shi Mingei-kan is popular for its cherry blossom in spring and maple leaves in the fall. The museum is a 15 minute walk from Hiratobashi Station on the Meitetsu Mikawa Line.

The Toyota City Museum of Local History 10 minutes on foot from both Toyota-shi and Umetsubo has displays of pottery from the Yayoi Period as well as Kamakura era suits of armor, old baseball cards, painted shells, a large wooden shachihoko mythical good-luck carp with a lion's head, and an ancient bronze bell-shaped vessel - a doutaku - used in ancient from Yayoi period rituals. The grounds of the museum have a kofun burial mound brought from nearby Nomiyama-cho.

The Toyota Industrial Culture Center (Toyota Sangyo Bunka Center) near Shin-Toyota Station is great for children. The free Hands-on Museum (Tel: 0565 37 3007) introduces kids to basic science through play and there is also a planetarium (300 yen). The Toyota Sangyo Bunka Center (Toyota Industrial Culture Center) is also the venue for a number of community activities and classes including language, dance and yoga.

The Aichi-Kogen Quasi National Park is close to Toyota and includes Mt. Sanage and Korankei Gorge near the village of Asuke on National Highway 153. The trails up the 629 meter Mt Sanage are part of the Tokai Nature Trail. From the northern Seto side the trail starts at Unkoji Temple, from the southern Toyota side the path begins at Sanage Shrine.

Kuraigaike Park to the east of Toyota city is a large park centered on Kuragaike Lake. The park contains a number of set piece gardens including an English Garden, a Four Seasons Garden and even a "Guest Ranch" with sheep and horses. The park includes the free Toyota Kuragaike Commemorative Hall, another museum showcasing the development of the Toyota company from textiles to motor cars.
Buses run hourly from Toyota-shi Station to Kuraigaike Park.

Matsudaira-go, also in the east of Toyota City, is an area of historic interest and natural beauty. It was in this place that the Matsudaira clan had its base and it was Matsudaira Takechiyo, who later changed his name to Tokugawa Ieyasu, who was to become the supreme leader of Japan in 1603 and begin the Tokugawa shogunate that was to rule Japan until 1867.

Sanage Onsen is a local beauty spot a short drive from Toyota city. The Kinsenkaku Hotel (Tel: 0565 45 6111) is a large onsen resort hotel in the area with a radium bath said to be good for rheumatism. Free shuttle buses run to the hotel (30 minutes) from Josui Station on the Meitetsu Toyota Line. There's a peaceful pond above a shrine not far from the hotel. A row of eateries runs along the street past the hotel. 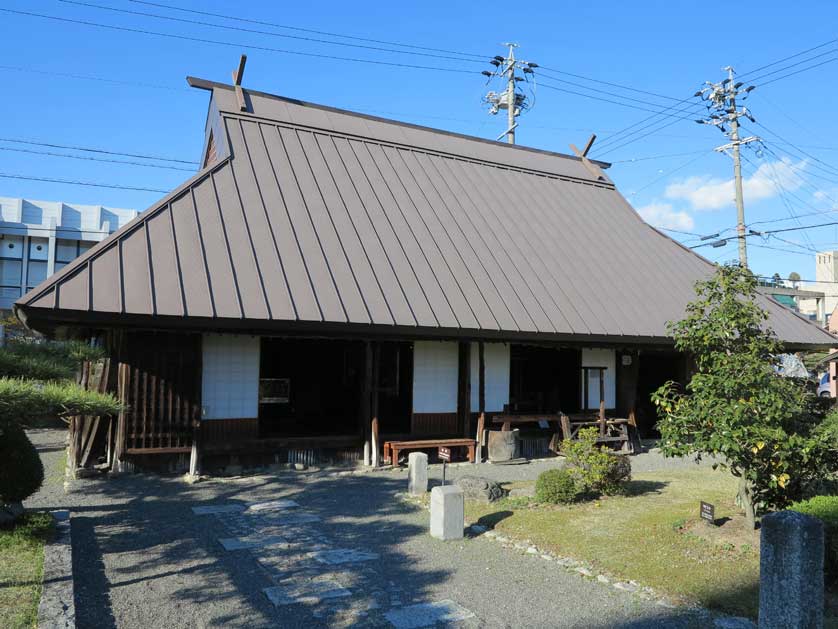 Toyota City has a number of festivals throughout the year. The Koromo Festival is a harvest festival held in October when eight floats (dashi) are paraded through the city by happi-clad participants.

The last Saturday of July is the Oiden Festival - a modern dance parade and competition through the main street in Toyota City leading up to Toyota Stadium followed on the Sunday by a large display of fireworks. The dance groups dress in a variety of costumes and include people of all ages. "Oiden" is a word from Mikawa dialect and means "Come on!", and the emphasis is on fun! The fireworks display takes place along the banks of the Yahagi River near Toyota Stadium, lasts about two hours and about 10,000 fireworks are let off.

The history of the Matsudaira clan is celebrated with the Matsudaira Matsuri that takes place on the weekend before April 17 each year and features a procession of participants in Edo Period costume.

Also in Matsudaira-go, the Hadaka (Naked) Festival, known as Tenkasai takes place on the second Sunday in February at Matsudaira Toshogun Shrine, when males over 16 years old wearing loincloths take part in a purification ritual.

Matsudaira go is also accessible by by Toyota Oiden Bus from Toyota City Station bound for Onuma (大沼). Get off at Matsudaira-go bus stop. About 40 mins. 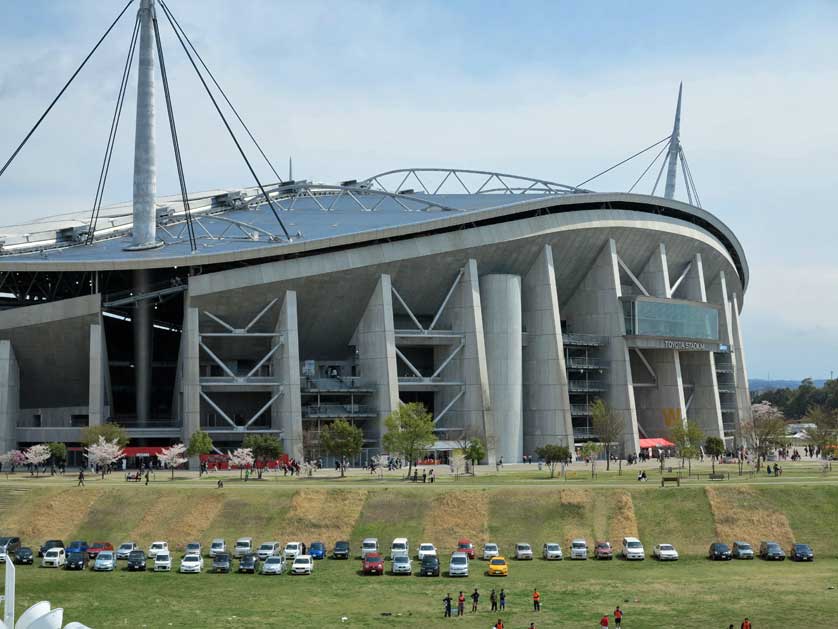 Toyota Stadium on the banks of the Yahagigawa River 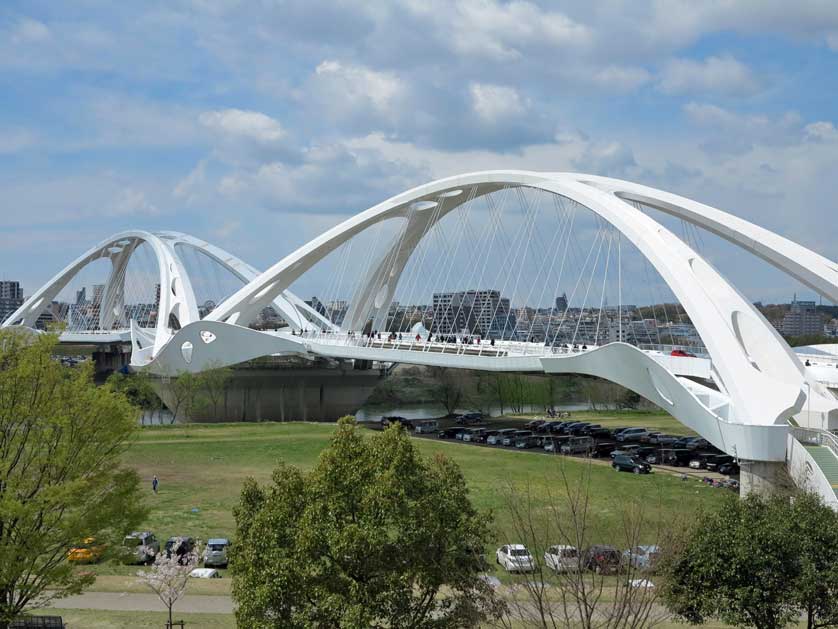 Toyota Bridge near to Toyota Stadium

A 15 minute walk north from Toyota-shi Station brings you to the modernist Toyota Bridge and the 45,000 capacity Toyota Stadium, both designed by Japanese architect Kisho Kurokawa. Toyota Stadium plays host to some of the home games of J-League soccer team Nagoya Grampus. It will also host games at the 2019 Rugby World Cup. The banks of the Yahagigawa River (矢作川) are also a pleasant place for pick-up games of football, picnics and strolling.

Between Toyota-shi and Shin-Toyota stations is the Matsuzakaya Department store and a number of places to eat and drink. Toyota has Chinese, Thai and Korean restaurants as well as some Filipino show pubs.

Close to Toyota-shi station is an alley with fast-food restaurants and other more up-market eateries. 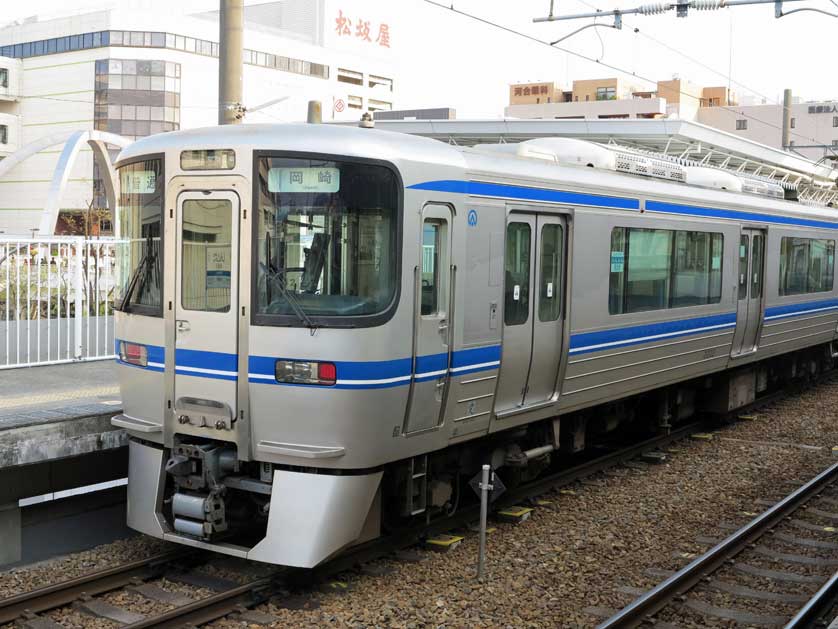 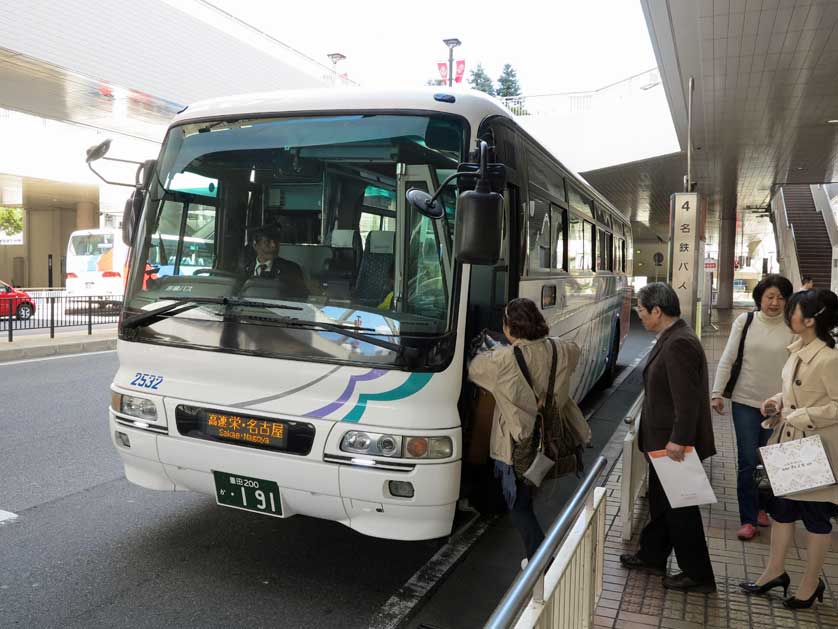 Bus to Oasis 21 at Toyota-shi Station

The history of the Matsudaira clan is celebrated with the Matsudaira Matsuri that takes place on the weekend before April 17 each year and features a procession of participants in Edo Period costume.

Also in Matsudaira-go, the Hadaka (Naked) Festival, known as Tenkasai takes place on the second Sunday in February at Matsudaira Toshogun Shrine, when males over 16 years old wearing loincloths take part in a purification ritual.

Matsudaira go is also accessible by by Toyota Oiden Bus from Toyota City Station bound for Onuma (大沼). Get off at Matsudaira-go bus stop. About 40 mins.

The following are some recommended hotels in and near the center of Toyota City.

The nearest shinkansen station to Toyota is at Mikawa Anjo, where only the slowest Kodama trains stop. Mikawa Anjo also has trains on the Tokaido Line to Nagoya Station and Okazaki. To reach Toyota-shi Station from Mikawa Anjo take a JR Tokaido train to Kariya and then change to the Meitetsu Mikawa Line for Chiryu and then change again here for Toyota-shi.

Coming from Nagoya take the Tsurumai Line of the Nagoya subway. Some Tsurumai Line trains go directly to Toyota-shi Station otherwise change at Akaike Station, from where there are also Meitetsu buses to Toyota. The Tsurumai Line becomes the overground Meitetsu Toyota Line after Akaike.

There are buses (50 minutes) between Toyota-shi Station and the Oasis 21 bus terminal in Sakae in Nagoya. Toyota is connected by direct buses to Chubu International Airport.

By car take National Highway Route 153 from Nagoya to Toyota.

Toyota city guide: read a guide to Toyota in Aichi Prefecture near Nagoya, home of the Toyota Motor Corporation and a number of interesting museums.