Sasayama in Hyogo Prefecture remains largely unchanged with architecture and layout dating from the Edo Period of Japanese history.

Sasayama, a castle town founded by Tokugawa Ieyasu, lies in a rural area in the middle of Hyogo Prefecture.

Due to its wealth of historic sites is has been registered as a Japan Heritage town. Although not far from the major tourist sites of Kyoto, Osaka, Kobe, Himeji etc it is not on any of the major transportation routes. Consequently it has escaped the ravages of mass tourism and still offers an unhurried glimpse of Japan in times gone by. 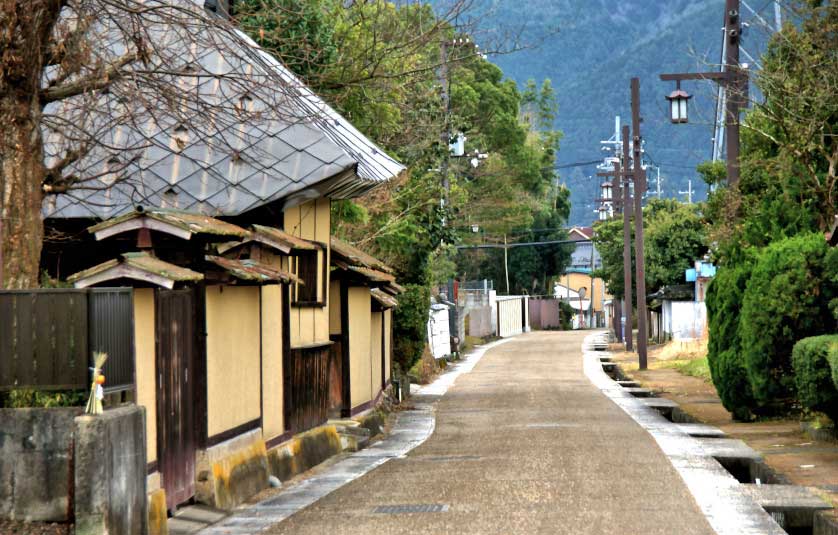 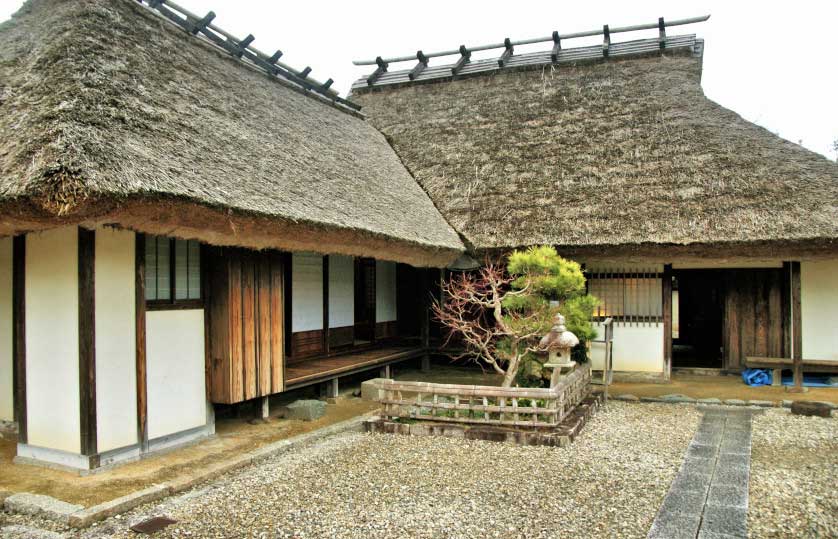 The ruins of Sasayama Castle that the town grew up around are a big draw, especially the reconstructed Oshoin Palace.

Among the other attractions is an area that retains much of the layout and architecture of the Edo Period, registered as a Preservation District for Groups of Traditional Buildings. Classed as a castle town, the area actually comprises two distinct districts, a samurai district, and a merchant district.

Castles tended to be surrounded by samurai residences as an extra layer of defense, and Sasayama Castle was no different.

Streets of samurai homes lined the outer moat of the castle, and those to the immediate west and south have been spared major redevelopment.

The area is known as Okachimachi, and was the site of the first residences of the new castle town. Some of the homes are more modern, but the layout of the streets and properties is as it was more than 300 years ago. Some of the buildings do date back to the Edo Period, and one of them is open to the public as a history museum.

The Anma Family Samurai Residence & History Museum is housed in buildings that belonged to the Anma family, retainers to the Aoyama Clan, lords of the castle.

The home was constructed in 1830 following a blaze which destroyed the former residence. The thatch roofed buildings are laid out in an L shape to allow plenty of light to enter the interior. Every room contains artifacts and furniture from daily life including a set of armor.

The storehouse has an exhibition of Tanba Yaki, the local style of ceramics that has been produced in the area for 800 years.

Small gardens can be seen from some of the rooms, and you can sit on the veranda overlooking a small pocket garden and listen to the sounds of a suikinkutsu, the "echo chamber" buried beneath the stone water basin. 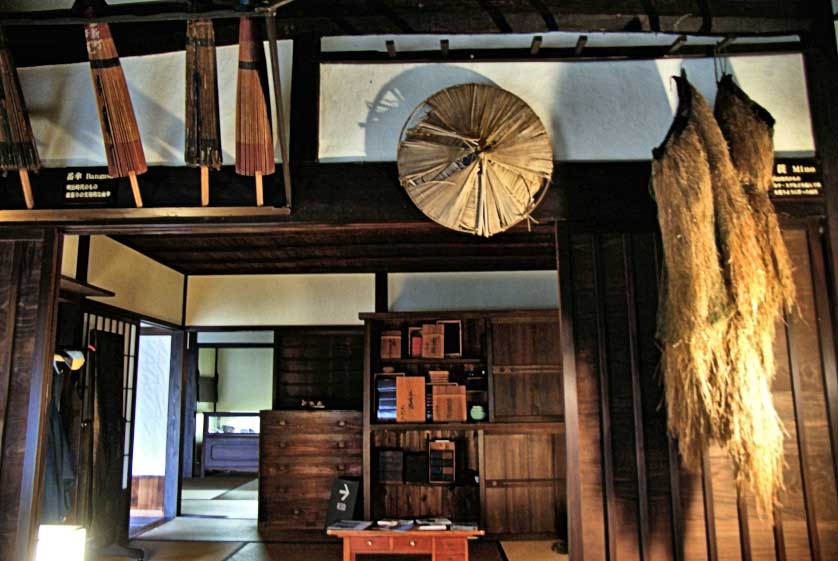 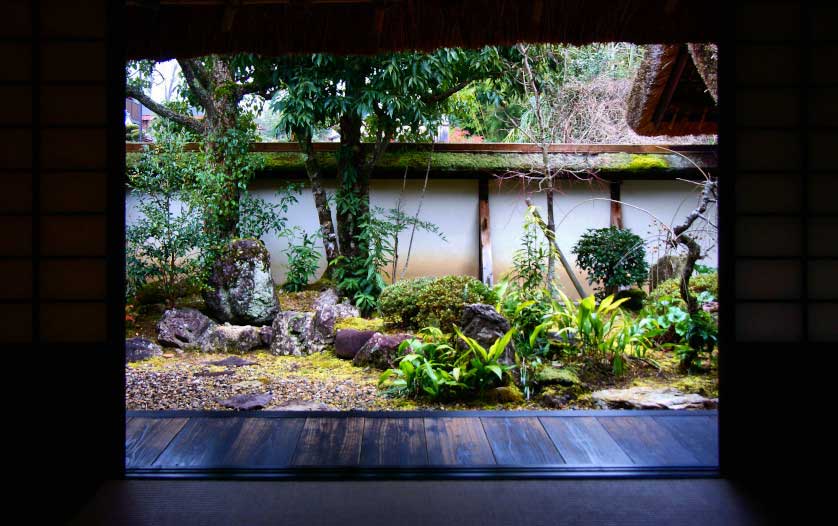 Iwazabo Tamba Kotori is an unusual cafe in another former samurai residence. It is located right at the southwest corner of the outer moat. Their specialty is several varieties of a rare, black, Chinese tea, served with handmade sweets made in-house from local organic ingredients.

The traditional interior is enhanced by the displays of local crafts, some of which are made by the owners father, a potter in the Tamba style.

His work is also used in the cafe and the local ingredients and the teas are also on sale. Though not the cheapest cafe in Sasayama, it is certainly the most atmospheric. 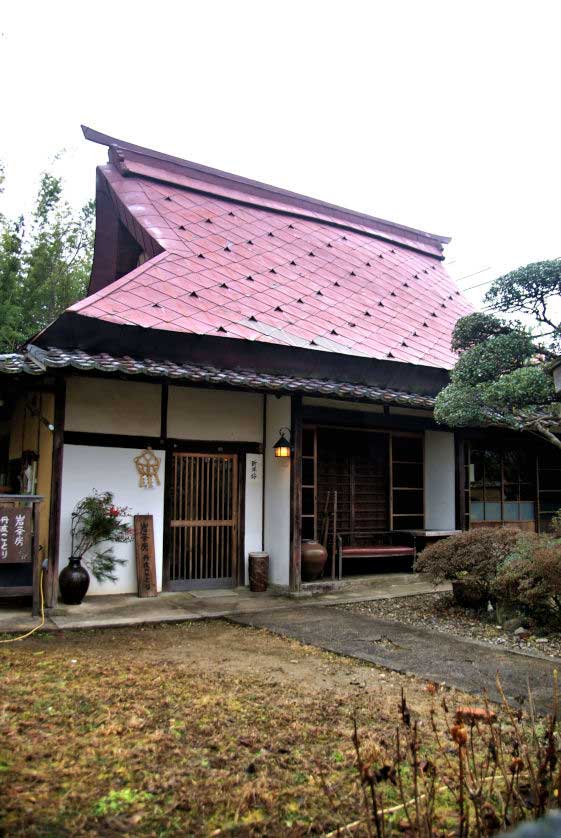 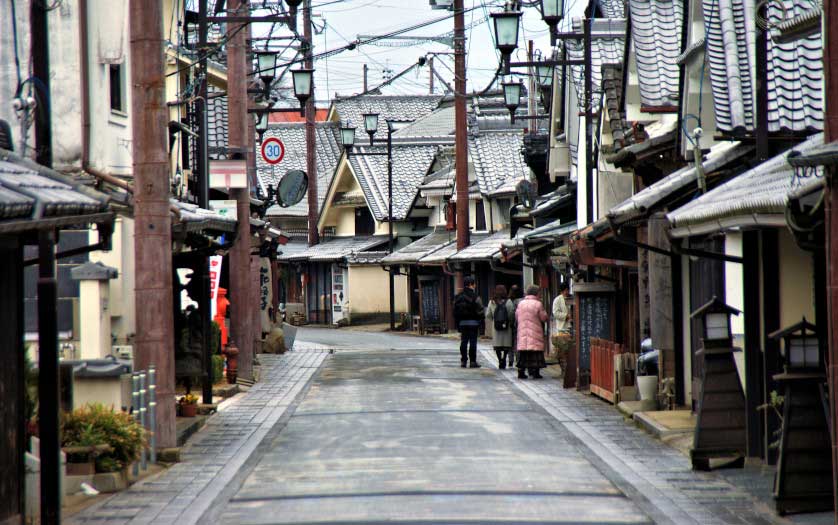 Kawaramachi in Sasayama, a Preservation District for Groups of Historical Buildings

Heading east from the southeast corner of the castle outer moat is Kawaramachi, the merchant district.

It runs almost a kilometer to the river, but the bulk of historical buildings are clustered in the middle 600 meters or so.

The architecture is known as Tsumairi, which means the main entrance is on the gable end of the building. They all have tile roofs, kawara means roof tile and gives the area its name.

The walls are earthen but covered with white plaster, and there is lots of wooden lattice-work, some of it painted a deep red.

Some of the buildings are just homes, but there are still many shops selling a variety of products. One of the most popular shops is called Hakutoya and its interior is like an Aladdin's Cave of knick knacks from around the world.

There are also cafes and eateries, and the narrow lanes leading off the main street are also worth exploring.

There are two museums on the street. The first is Tamba Kotoukan, the Old Tamba Pottery Museum. Tamba, the old name for the province, is home to one of the old styles of pottery that date back to ancient times known as Rokkoyo, the Six Ancient Kilns.

The museum has a large collection of pieces dating from about 800 years ago up to the end of the Edo Period.

There is a combined ticket that includes the neighboring Noh Museum for only 700 yenwww.tanbakotoukan.jp (Japanese) 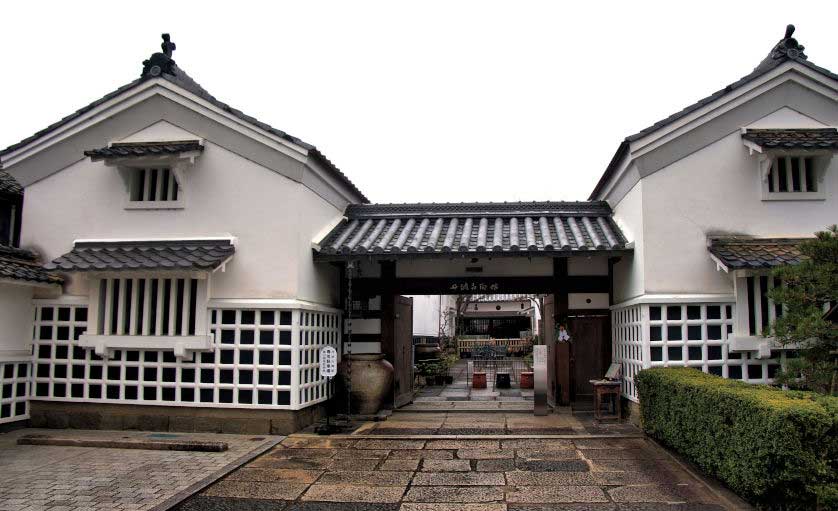 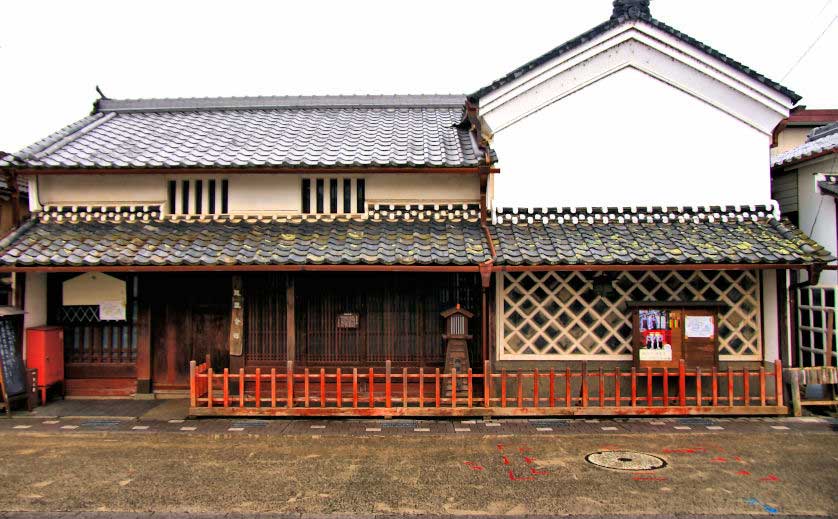 Traditional residence from the Edo Period with storehouse attached, in Kawaramachi, Sasayama

Almost next door to the Kotoukan is the Noh Gaku Shiryokan, the Museum of Noh Artifacts. Here you have a fairly rare opportunity to see masks, costumes, props, and musical instruments used in the classic Noh theater.

At the Kasuga Shrine in central Sasayama is a Noh stage where performances are held twice a year. This small museum also has a reproduction of a Noh stage. There is no English information, but for those with an interest in Noh this is a great opportunity.

Entry 500 yen for adults, 400 yen students, 200 yen children. There is a combined ticket that includes the neighboring Pottery Museum for only 700 yenwww.nohgakushiryoukan.jp (Japanese)

Access To Sasayama - how to get to Sasayama Castle

Entry is 400 yen for adults, but a 600 yen ticket gets you access to the castle and three other nearby sites including a samurai residence, so is much better value.

Central Sasayama is a 30 minute bus ride from the closest train station, Sasayamaguchi on the JR Fukuchiyama Line. It is just over an hour from Osaka Station. The cheapest fare is 1,140 yen. Limited Express trains take 51 minutes but cost 2,630 yen.

By car Sasayama is easily reachable from Kameoka on National Highway 372 in about 1 hour. The town is also about 1 hour north of Kobe by car. 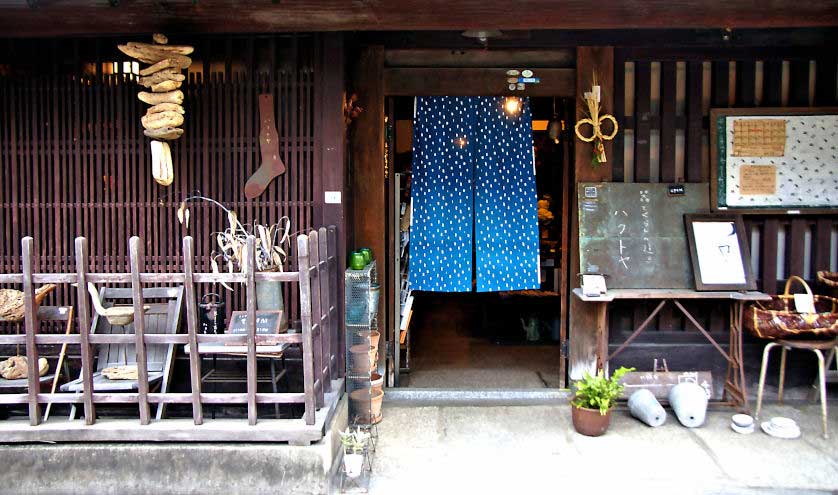 Delightful storefront in the merchant district of Kawaramachi in Sasayama 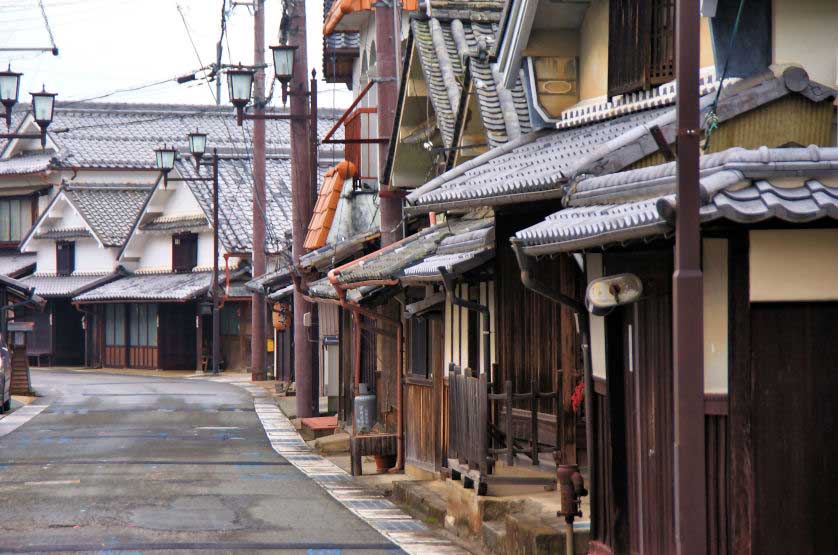 $40 per person
Discover all our activities in Osaka (148)