Dogo Onsen in Matsuyama, is the oldest hot spring onsen resort in Japan, claiming a history of over 1,300 years, as the area is mentioned in the Nihon shoki chronicle.

The present bath house dates from 1894 and is mentioned in Natsume Soseki's novel, Botchan. The author recommends going for the first class option and this includes use of a private room after your bath, green tea and dango sweets.

The ornate complex includes a number of different baths including the Kami-no-yu and Tama-no-yu. The Yushinden imperial baths were built in 1899 for the imperial family and were last used in 1950.

The lavish room is now open for guided tours. The Tsubaki-no-yu (Tel: 089 935 6586) annex through the shopping arcade has less of a tourist feel and is used mainly by locals. 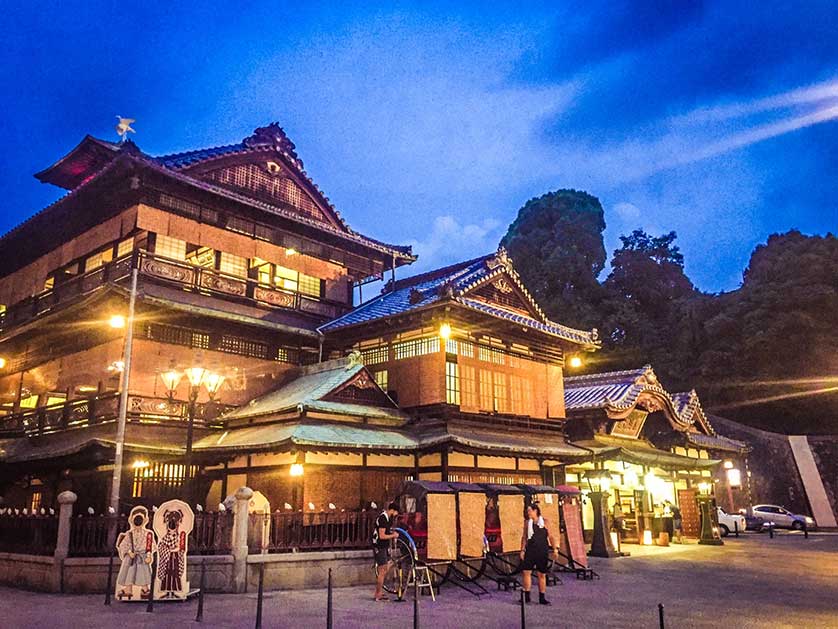 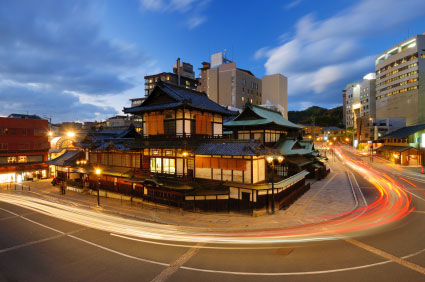 Dogo Onsen Station is a Meiji-era wooden station and the starting point of the "Botchan Ressha" steam train which runs to Matsuyama-shi station or Komachi Station and then back again.

Around the Hojoen area at the station is an onsen foot-bath and the Botchan Karakuri Clock. Mechanical figures re-enact a scene from Botchan when the clock strikes the hour.

Dogo-koen is a small park south of the hot spring, famous for its cherry blossoms, which is the remains of Yuzuki Castle - the former residence of the Kono clan, the rulers of the Iyo domain in feudal times.

The small, free museum Yuzuki-jo Museum (Tel: 089 941 1480) displays items that have been discovered in the excavations of the grounds.

There are a number of other Shiki-related sites in Matsuyama including Gudabutsu-an (Tel: 089 921 3711), a restored rustic, lodging house where the writers Shiki and Soseki spent 52 days together, now relocated to Matsuyama Castle Park near the Bansui-so villa.

Shiki House (Tel: 089 945 0400; admission 400 yen) is a replica of the poet, Masaoka Shiki's childhood home with his desk and examples of his calligraphy and is in the grounds of Shoshuji Temple. Visitors to Matsuyama are encouraged to write haiku and drop them into "Haiku post boxes" - the best entries receive a souvenir.

Also in the Dogo Onsen area is Ishite-ji Temple, number 51 of the 88 Sacred Temples and dating from 728, The temple has a fine pagoda and a quirky collection of interesting statues and mandalas in the tunnels leading to the park behind the temple and in the park itself.

Alternatively to arrive in style, ride the Botchan Ressha (坊っちゃん列車) to Dogo Onsen Station from Matsuyama Station or Matsuyama-shi Station.

Dogo Onsen (道後温泉) in Matsuyama, Shikoku, is the oldest hot spring onsen resort in Japan, claiming a history of over 1,300 years, as the area is mentioned in the Nihon shoki chronicle.