Ikuchijima is a small island of about 11,000 people in the Seto Inland Sea between the main island of Honshu and Shikoku.

The bridge connecting Ikuchijima with Omishima, named Tatara Bridge, is particularly graceful with a center span of 890 meters and was the longest cable-stayed bridge in the world when it was built. 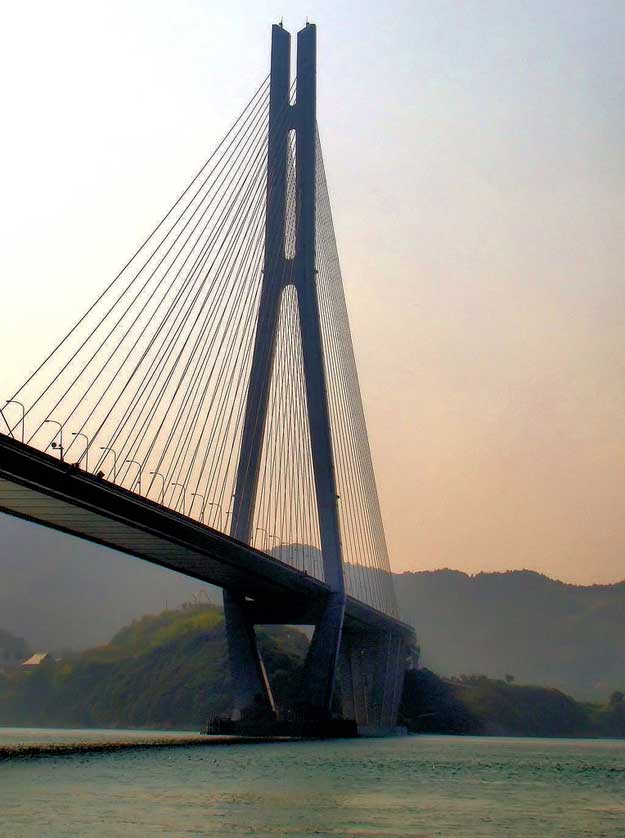 The island has several sites of interest, and as the popularity of the bike path that follows the Shimanami Kaido has grown, the island has become quite a tourist destination and it is easily possible to spend a whole day there.

The biggest attraction on the island is located in Setoda, the island's main town. Kosan-ji (耕三寺), a modern temple complex that would perhaps better be described as a Buddhist theme park.

Kosan-ji belongs to the Jodo Shinshu sect and covers 50,000 square meters but has no parishioners. It was founded in 1935 by Kanemoto Kozo to ensure his late mother's rebirth into Buddhist paradise and took more than 30 years to complete.

There is nowhere quite like it anywhere else in Japan yet many of the buildings will look familiar as what he did was build replicas, at a slightly reduced scale, of many of the most famous religious buildings from more than 1,000 years of Japanese history. He even went so far as to "improve" the architecture with embellishments, some gaudy, others kitsch - it really is a one-of-a-kind place. 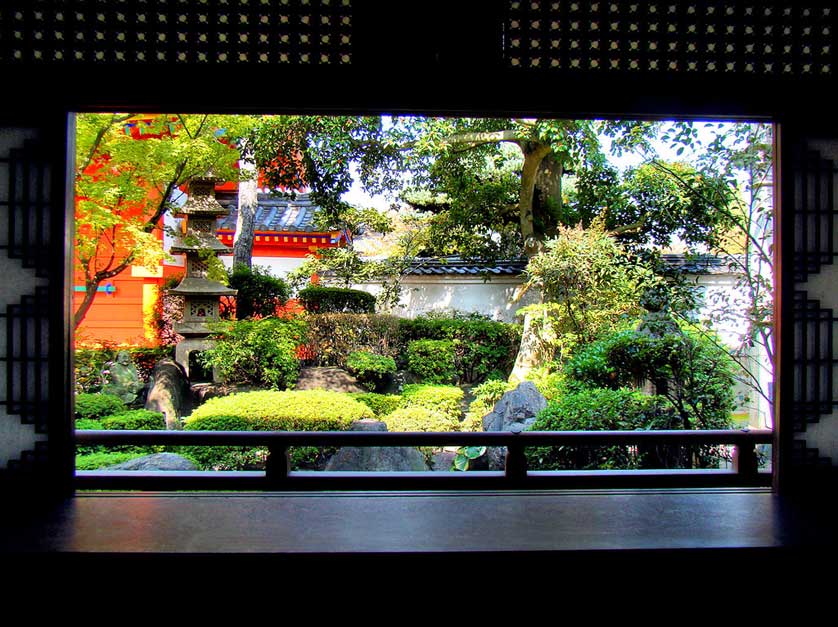 The garden seen from within Choseikaku Villa

Before Kosan-ji was built there was Choseikaku Villa. Kanemoto Kozo was a wealthy businessman from Osaka who made his fortune managing a steel tube manufacturing company that made most of its profits from weapons, and he spared no expense to build the villa as a holiday home for his mother.

Construction began in 1929 and villa was designed by Kanemoto himself. The main building is constructed in traditional Japanese style out of five different types of wood. Several of the rooms including the living room are particularly grand and the tour of the house is well worth taking. 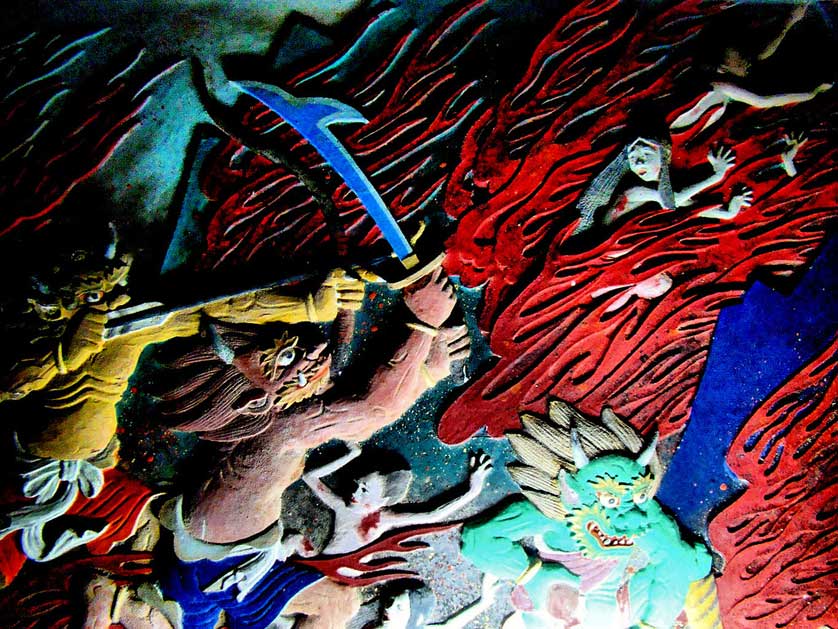 The fate awaiting those in Buddhist Hell as seen in the Cave of 1,000 Buddhas

Descending down into a man-made cave beneath the temple grounds, one passes numerous tableaux and reliefs depicting the horrors awaiting those who go to the Buddhist hell. The scenes are not too dissimilar to those depicting the Christian hell. At the bottom, the cave opens up to reveal in dim light a thousand Buddhist statues rising up in nooks and crannies in the cavern walls. One comes out in to the light under the giant statues of Kannon, the Buddha of mercy. 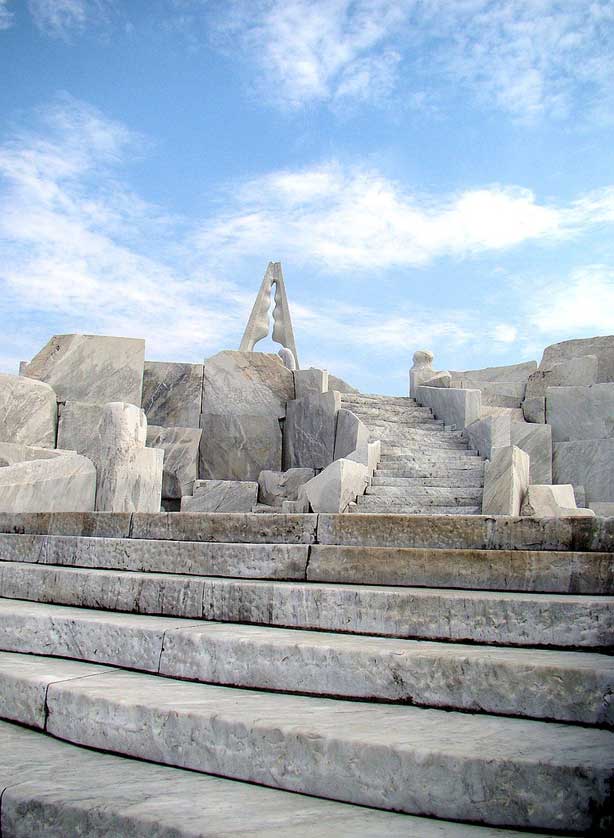 Tower of the Light by Kazuto Kuetani

The Heights of Eternal Hope for the Future is the hilltop behind Kosan-ji and is only accessible from within the temple. The hilltop is covered with 5,000 square meters of dazzling white marble and crowned with a series of giant sculptures of the same marble.

It is the creation of Japanese sculptor Kazuto Kuetani, a Hiroshima native who now lives in Italy, which is where the Carrara marble was sculpted and shipped from. The sculpture garden is certainly unique, but if it is a sunny day it is advisable to wear sunglasses as the glare can be extreme. Within the sculpture garden is a small Italian restaurant, Cafe Cuore, with a large patio for enjoying the views over the harbor town below while sipping wine or an espresso.

Kanemoto Kozo was an art collector and his collection became the basis of the Kosan-ji Museum located across the road from the temple's main entrance. There are three collections on display, Buddhist art from the Heian to Edo periods, including a few pieces from China and Korea, a collection of tea ceremony artifacts - Kanemoto was a master in the Yabunochi School, and a collection of modern Japanese art mostly concentrating on the first half of the twentieth century.

Kosan-ji and all its included sights are open from 9 am to 4 pm every day.
Entrance is 1,500 yen.

Apart from the Kosan-ji temple complex there are a number of other attractions on the island.

Hirayama Ikuo was a major Japanese painter of the Nihonga style who passed away in 2009. He was born in Setoda and was in Hiroshima when the city was atom bombed. He is known mostly for large scale painting of the Silk Road as well as of his home turf of the Inland Sea. A series of his Buddhist paintings are on display at Yakushiji Temple in Nara.

The Setoda History & Folklore Museum is a small museum documenting Setoda's importance to the marine trade.

Open Wednesdays to Mondays, 10 am to 4 pm. Entrance is free. 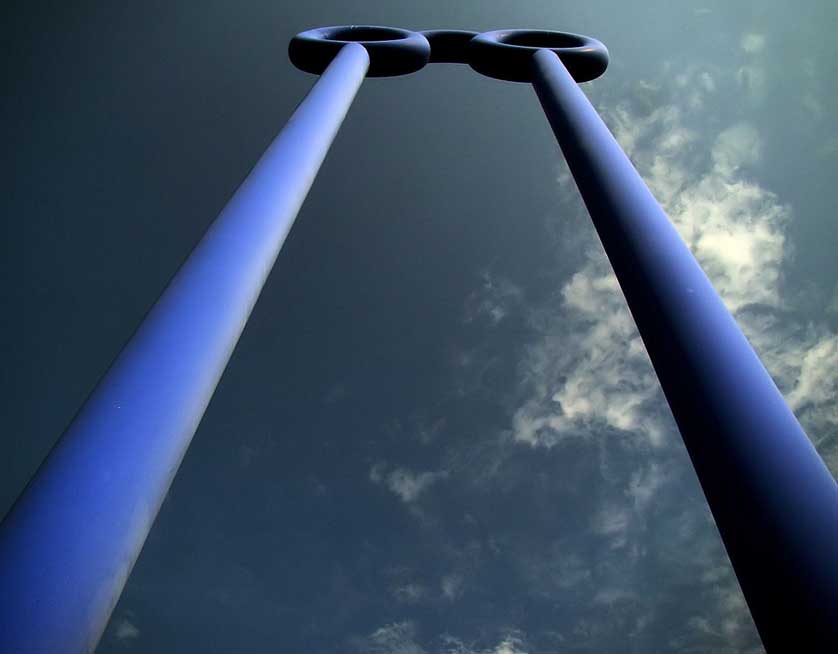 There is a bike path that completely encircles the island and along it one can see the Island-Wide Art Museum, 17 pieces of contemporary sculpture mostly by well known Japanese artists placed around the island.

There are numerous small shrines and temples along the way and several nice beaches.

Kojo-ji Temple on the hill above Setoda with a nice pagoda and views over the island and surrounding area is well worth a visit.

The island is easily explorable on a day trip from the mainland, but for those wanting to stay there are numerous minshuku and ryokan as well as a youth hostel and several camp sites.

Suminoe Ryokan offers the best of traditional old hospitality, with spacious, clean, comfortable private tatami mat rooms looking out on the beautiful gardened grounds, a communal bathroom and an onsen hot pool to relax in, and wonderful Japanese cuisine. Enjoy hospitable tranquility by the sea.

There are direct buses to Setoda from Imabari on Shikoku, but taking a bus from Onomichi will require a transfer on Innoshima.

There are regular ferries to the island from Onomichi (35 minutes) and Mihara (25 minutes) in Hiroshima.

An increasingly popular way to reach the island is by bicycle or by foot. The Shimanami Kaido Bikeway is an 80km path from Onomichi to Imabari. There are bike rentals on each of the islands and each bridge has a dedicated bicycle and pedestrian section.

Ikuchijima: read a guide to the island of Ikuchijima in the Inland Sea famous for the temple of Kosan-ji.

$108 per person
Discover all our activities in Hiroshima (142)