Jakko-in, in Ohara to the north east of Kyoto, is on the other side of the valley from the main cluster of temples around Sanzen-in.

Jakko-in, a Tendai-sect temple, is justly famous for the beauty and tranquility of its garden and lovely autumn foliage. 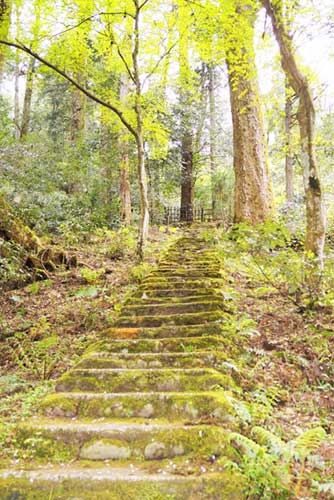 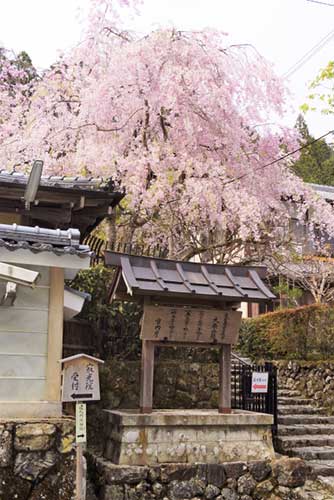 Legend has it that Jakko-in dates from the 7th century and the Nara Period and was built by Prince Shotoku Taishi to mourn his father.

Jakko-in has been a nunnery since 1186 and is associated with the classic feud between the rival Taira (Heike) and Minamoto (Genji) clans.

At the decisive sea battle of Dannoura near present-day Shimonoseki, the Taira were defeated and the Empress Kenreimon jumped into the water following her mother, who was holding her infant son, the Emperor Antoku.

Kenreimon, however, was pulled from the waters by the Minamoto and retired to Kyoto where she shaved her head and became a nun, dedicating her life to prayer, until she died in 1213.

Jakko-in is much smaller and more modest than nearby Sanzen-in. The Main Hall contains a statue of Jizo, the guardian of children.

The hall was unfortunately burned down in 2000 and the statue damaged in what is suspected to have been a case of arson. The building and statue are therefore modern restorations. The rebuilt hall took five years to complete and the ancient statue is now kept stored away.

The intimate stroll garden at Jakko-in contains moss-covered stone lanterns and cherry trees surrounding a small pond. The remains of a 1,000 year old pine that perished in the fire can also be seen. The small bell tower dates from the Edo Period.

The metal lantern in front of the Main Hall was brought from Fushimi-Momoyama Castle and donated to the temple by Hideyoshi Toyotomi.

The temple grounds also contain the Meiji-era tomb of the empress. 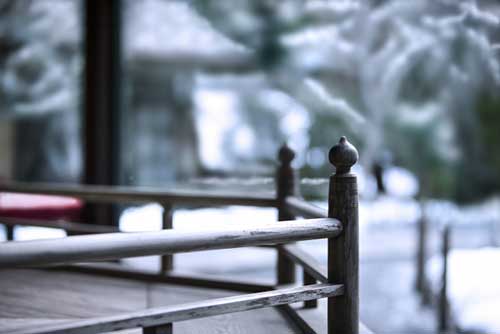 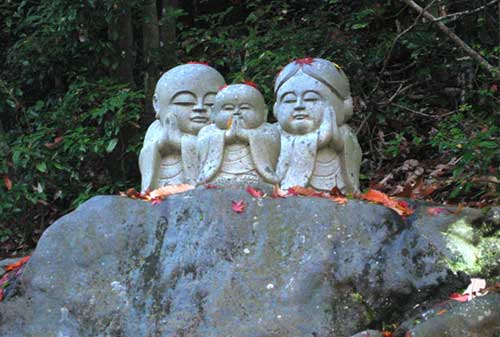 By bus to Ohara take a Kyoto bus #17 (white color) from Kyoto Station to the Ohara bus stop and then walk about 15 minutes along a path that follows the Kusao River to Jakko-in.

You can also get the #17 bus at Demachiyanagi Station. The journey from Kyoto Station takes an hour and a bit in total.

Alternatively, take an Eiden Line train from Demachiyanagi Station to Yase-Hieizanguchi Station and then change to bus #19. You can also get on bus #19 at Kokusaikaikan Station on the Kurasama Line of the Kyoto subway.

Ohara is outside the area covered by the 1-day Kyoto bus pass.

There is much to see in Ohara, which is well worth a half-day or full-day excursion from Kyoto. Other important temples in Ohara include the Raigo-in Temple, Housenin (Hosen-in), one of the so called bloody temples of Kyoto and a sub-temple of Shorin-in, like neighboring Jikko-in Temple. The most famous temple in Ohara is, of course, Sanzen-in.

Also in Ohara are the tombs of two emperors: Go Toba (died 1239) and Juntoku (died 1242) and the so-called Soundless Waterfall or Otonashi-no-taki near Raigo-in.

The road up to Sanzen-in from the bus stop is lined with souvenir shops selling local produce including mochi and yuzu, restaurants, and there are a number of traditional Japanese inns or ryokan to stay in Ohara. Recommended ryokan in Ohara include Gyozanen Onsen Ryokan, Ohara no Sato (which is very close to Jakko-in) and Ohara Sanso.

Jakko-in Temple in Ohara, Kyoto has been a nunnery since 1186 and is associated with the classic feud between the rival Taira (Heike) and Minamoto (Genji) clans.