Kenninji Temple in the Gion area is the oldest Zen temple in Kyoto and was founded by the priest Eisai.

Kenninji, the oldest Zen temple in Kyoto, is located in the historic Gion district, a stone's throw from the crowded thoroughfare leading to Yasaka Shrine and within sight of the pagoda of Kiyomizudera, but unlike those two major tourist sites, Kenninji has until recently attracted few visitors.

True, some may have passed through its grounds as a shortcut from one part of Gion to another, but few would have been aware that behind the high walls and locked doors and gates are some exquisite Japanese art and Zen gardens. 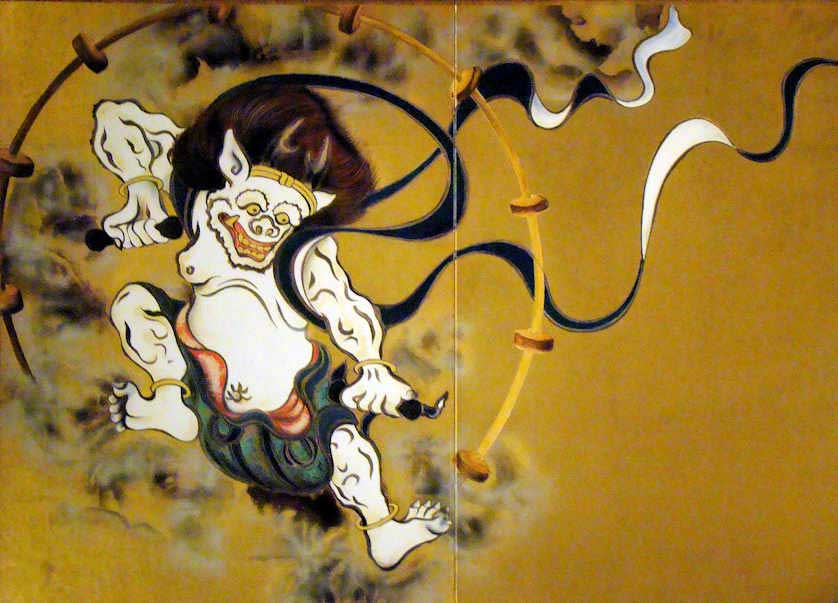 Raijin (雷神), the god of thunder, depicted on a screen at Kenninji Temple, Kyoto

Kenninji was founded in 1202 by the monk Eisai (sometimes pronounced Yousai) on the request of Emperor Tsuchimikado and with the support of Shogun Minamoto Yoriie.

At first the temple practiced a mix of Tendai, Shingon and Zen Buddhism, but during the tenure of the 11th abbot, Kenninji converted to a purely Zen temple.

Eisai (1141-1215) is credited with founding the branch of Zen known as Rinzai, and Kenninji is a Rinzai temple. Eisai is also associated with tea and wrote a book on its properties. A procession of tea jars from Uji is held on May 2 each year from Kenninji to Yasaka Shrine to remember those times.

Eisai died in 1215 and is buried here in the Founder's Hall.

Not long after Eisai's death another Tendai monk known as Dogen (1200-1253) lived and studied at Kenninji. Like Eisai he also traveled to China to study. Dogen founded the branch of Zen known as Soto and is also buried at Kenninji. 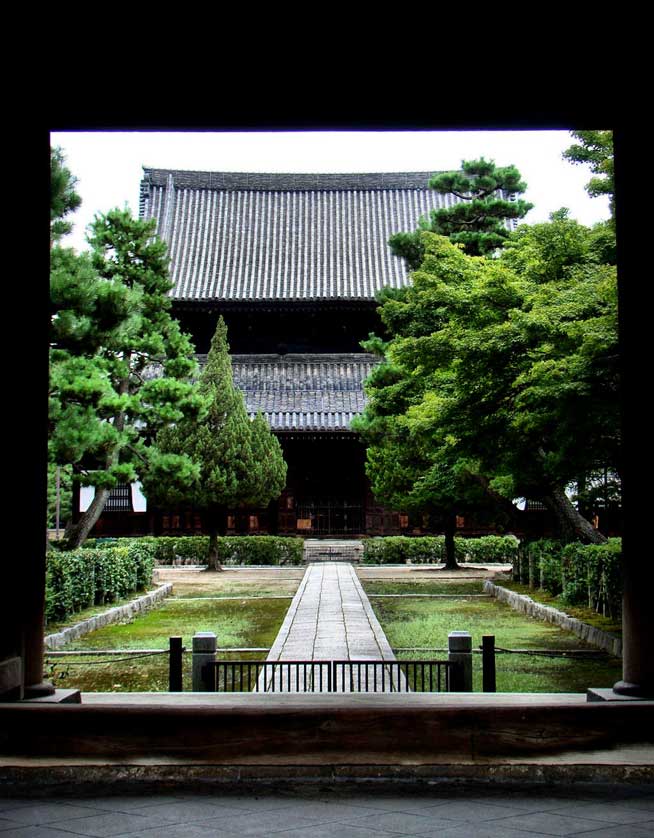 The Hatto or Dharma Hall at Kenninji Temple, Gion, Kyoto dating from 1765

Nothing is left from the time of Eisai and Dogen except, it is believed, the Chokushimon (Imperial Messenger Gate) possibly dating from the Kamakura Period (1185-1333) and still showing arrow marks from the Onin War that reduced much of Kyoto to ashes during the 15th century. These arrow marks give the gate another name - Yatate Mon or Arrow Gate.

Other notable structures standing today at Kenninji Temple include the Hojo (abbot's quarters) dating from 1599, a tea house from 1587 associated with Hideyoshi Toyotomi, and the Hatto (Dharma Hall) constructed in 1765.

The Hatto houses Kenninji's newest "treasure," the ceiling painting of Twin Dragons. Executed in ink on paper it is the work of Koizumi Junsaku, and was created over a period of two years before being installed in 2002 to mark the 800th anniversary of the founding of Kenninji Temple.

The painting measures about 175 square meters. Previously Kenninji had been the only Rinzai temple in Kyoto without a ceiling painting of dragons. The design is unusually dynamic and somewhat different from the traditional circular layout, at the request of the Abbot who wished the dragons to be "rampaging across the ceiling." 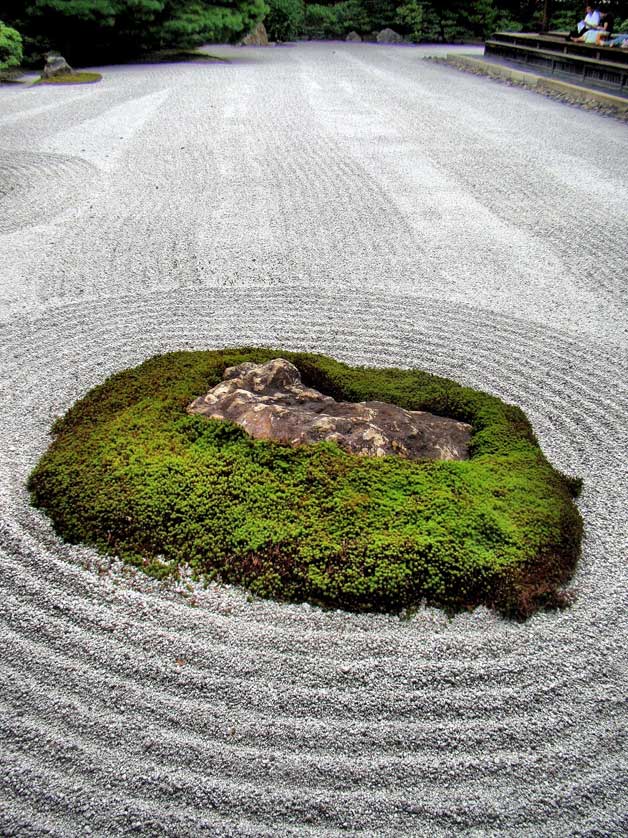 The Daio-en or Grand Garden at Kenninji Temple is a large, classical Zen stone garden

The Chouontei, the "garden of the sound of the tide" at Kenninji Temple in Gion

The Hojo displays many paintings and screens, notably a series of 32 sliding doors depicting "The cycle of death and rebirth" by Hashimoto Kansetsu, the famous Nihonga painter from the early twentieth century, but probably the most well known artworks are a pair of screens by Sotatsu Tawaraya (early 17th century) depicting Fujin and Raijin, the Gods of Wind and Thunder. Actually what is displayed are copies as the originals are in the Kyoto National Museum.

The Hojo provides access to some of the gardens of Kenninji. The Daio-en (Grand Garden) is a large, classic, Zen garden of white sand and rocks, but the jewel in the crown of Kenninji must be the Chouontei, the "garden of the sound of the tide." 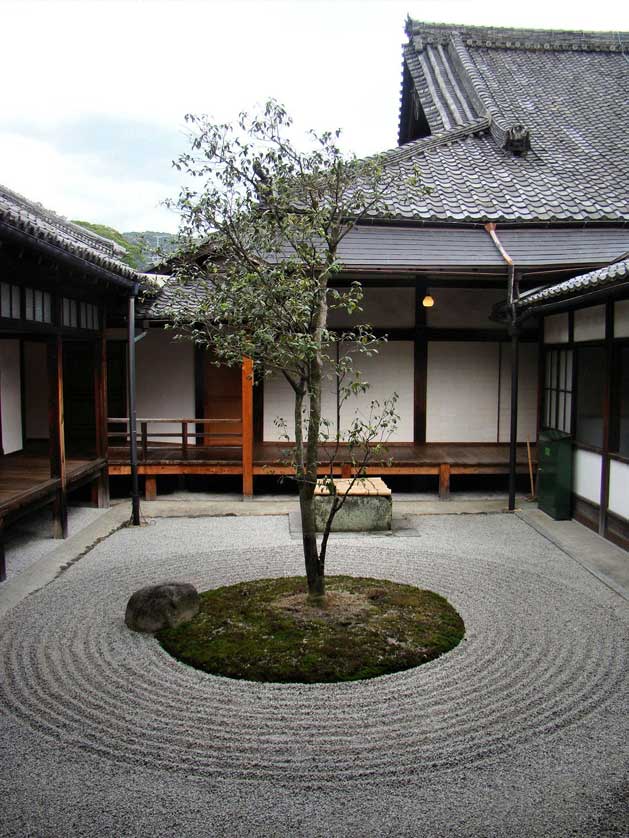 Viewable from all four sides, this mossy garden has three central rocks representing the Buddha and two Zen monks, and a stone for seated meditation. Wonderful at any season, the maples during fall make it especially colorful. There is another small garden, known as the Circle, Triangle, Square garden based on a famous piece of calligraphy by Sengai Gibon who was Abbot of Shofukuji (the first Zen temple in Japan in Fukuoka) in the early 18th century.

There are numerous sub-temples and shrines around Kenninji, the most accessible being Zenkyo-an, Marishiten Shrine and the Ebisu Shrine. At one time the temple had 53 sub-temples, now there are 14.

The Kyoto Ebisu Shrine was founded by Eisai at the same time as Kenninji to protect the temple. It is known as one of the Three Great Ebisu Shrines of Japan. Between January 8th and 12th it hosts a major festival. 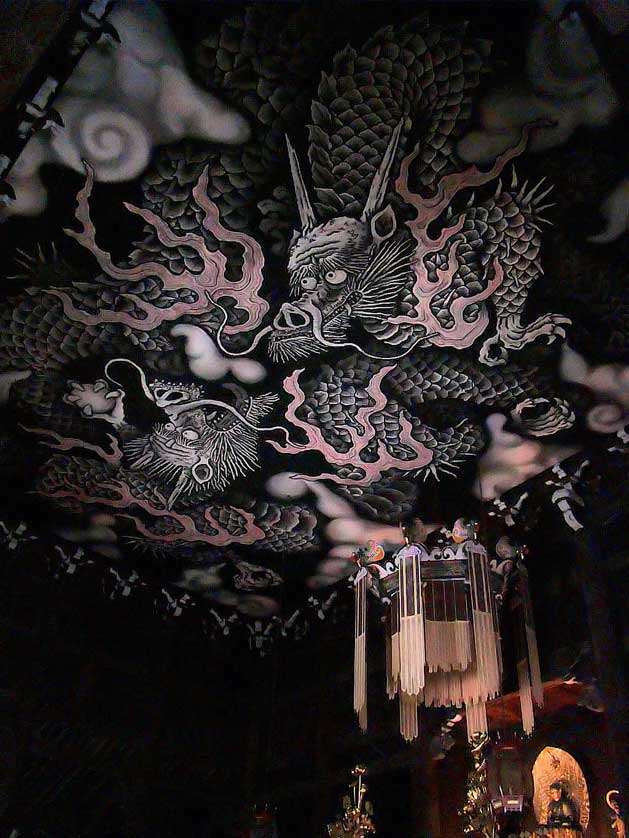 Ceiling painting of the Twin Dragons in ink on paper by Koizumi Junsaku, installed in 2002 to mark the 800th anniversary of the founding of Kenninji Temple

On the opposite side of the road to the Ebisu Shrine is Zenkyo-an and Marishiten-do.

Zenkyo-an is a small temple dating from 1327 and founded by the monk Seisetsu. Zenkyo-an is noted for its screen paintings by Kaihoku Yusho (1533-1615) and a statue of the female deity Marishiten.

Marishiten-do enshrines the Indian Goddess of Light, Marici, known as Marishiten in Japanese. She is often depicted as either riding on a boar or in a chariot being pulled by boars, and in the grounds of the temple are many statues of wild boars.

A visit to Kenninji can be combined with trips to Maruyama Park, Ryozen Kannon, Kodaiji Temple, Yasaka Jinja and Kiyomizudera. The Okazaki museum area and Heian Shrine are to the north across Sanjo dori. 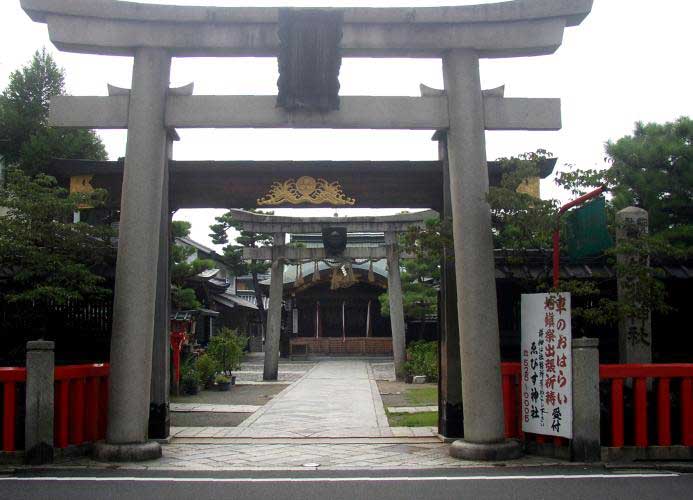 The torii entrance gate to Ebisu Shrine in Kyoto 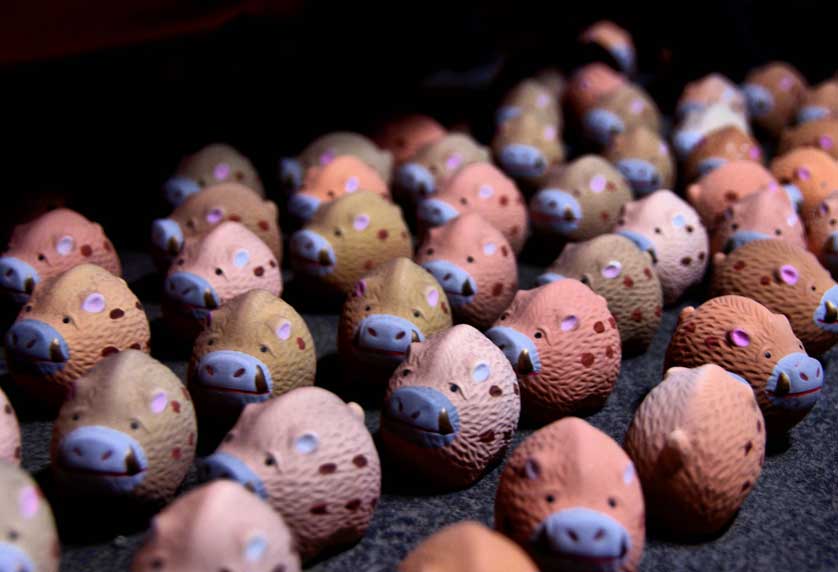 $59 per person
Discover all our activities in Kyoto (150)