Miidera Temple (aka Onjoji), near Otsu in Shiga Prefecture was founded in 672 during the Nara Period of Japanese history. There are over 40 buildings in this large Tendai temple complex. 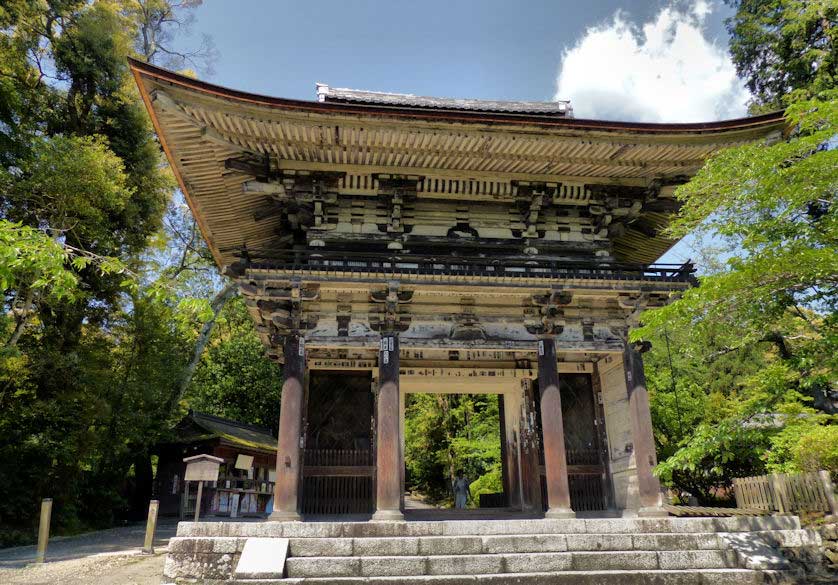 The grand Niomon, guardian gate, rebuilt in 1452, at the entrance to Miidera Temple 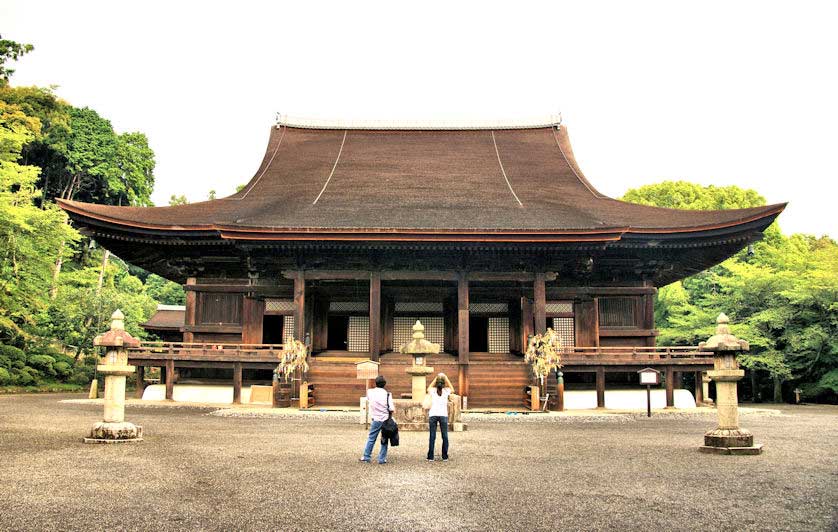 The Kondo, main hall of Miidera Temple, is rightfully classified as a National Treasure. Built in 1599 to replace the original that was built in 672 and destroyed by Hideyoshi

Miidera Temple, near Otsu in Shiga Prefecture, was founded in 672 during the Nara Period of Japanese history.

Also known as Onjoji, Miidera, is located at the foot of Mt. Hiei on the other side of the mountain from Enryakuji Temple. The temple is also just inland from Lake Biwa, Japan's largest lake. Miidera is the fourteenth temple in the Pilgrimage of 33 Temples (Saigoku Kannon Junrei) devoted to Kannon in the Kansai area of western Japan.

Miidera and Enryakuji, both Tendai sect temples, were once bitter rivals and sohei (warrior monks) from both temples engaged in violent conflict with each other. 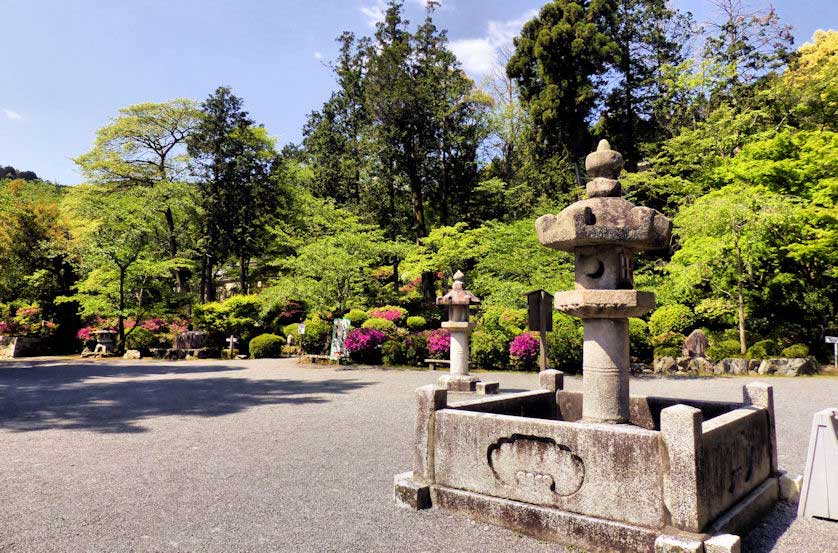 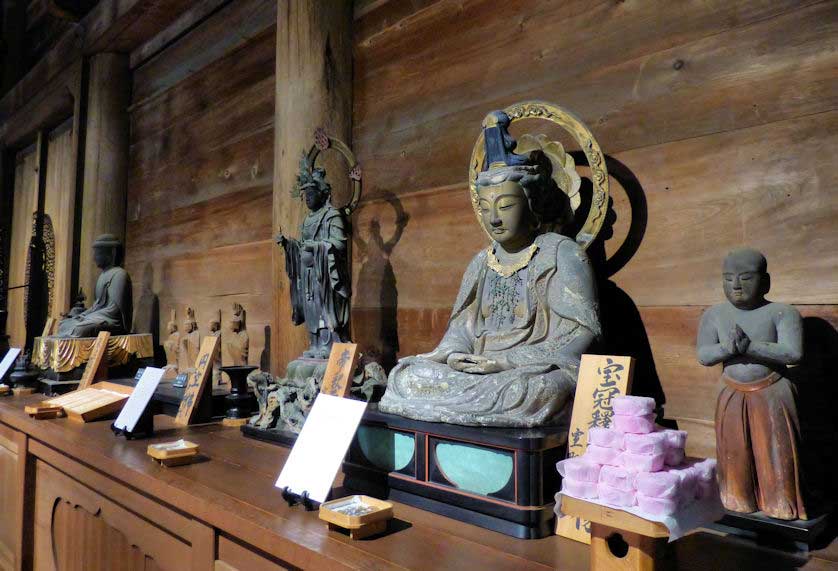 According to the legend, Miidera was founded by the Emperor Tenmu in honor of his brother, a previous emperor Tenji. Tenmu had seized the throne by defeating Emperor Kobun (Otomo), the son of Tenji, after marching on the then capital Omikyo (present-day Otsu city.

The temple was originally named Onjoji and was named Miidera ("Temple of Three Wells") by the priest Enchin (814-891) about two hundred years later.

Indeed it was under the abbot-ship of Enchin that Miidera grew in power and status as one of the "four largest temples in Japan." The others being nearby Enryakuji along with Todaiji and Kofukuji in Nara. These temples were considered the protectors and spiritual guardians of the nation.

This schism began a period of conflict that led to Miidera being burned to the ground several times by monks from its rival. Each time the temple was rebuilt earning it another name as the "Phoenix Temple."

In 1571, warlord Oda Nobunaga led a 30,000-strong army from his central Japan base and destroyed Enryakuji and much of Miidera as well. His successor Toyotomi Hideyoshi also destroyed the Main Hall (Kon-do or Golden Hall).

Miidera was later rebuilt after Nobunaga's and Hideyoshi's deaths and many of the oldest buildings thus date from the late sixteenth and early seventeenth century.

The Kon-do or Main Hall dates from 1599 and contains many statues of the Buddha. The building is a National Treasure and has a cypress bark irimoya (hip and gable) roof.

The Niomon Gate survived the early destruction and was restored with financial help by Tokugawa Ieyasu.

The large Amida-do Temple was built in 1937 and contains an image of the Amida Buddha. 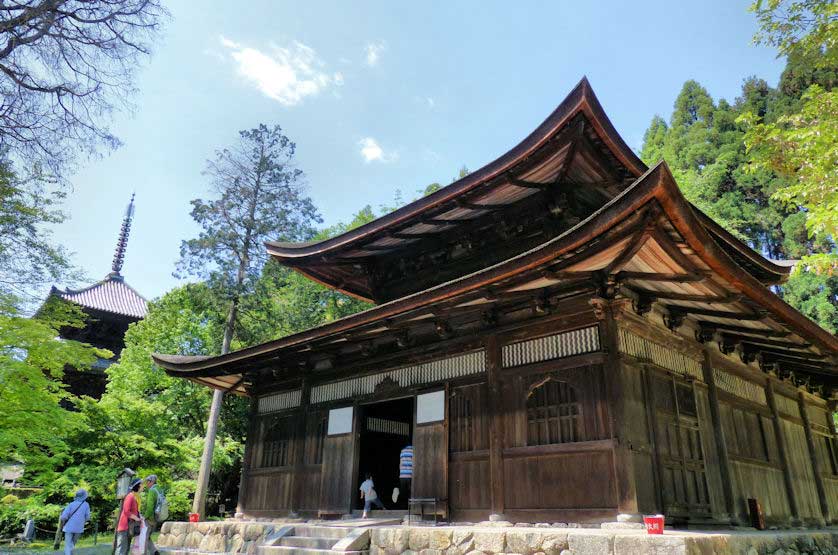 The Issaikyo-zo; Inside is a repository containing copies of all the Buddhist sutras 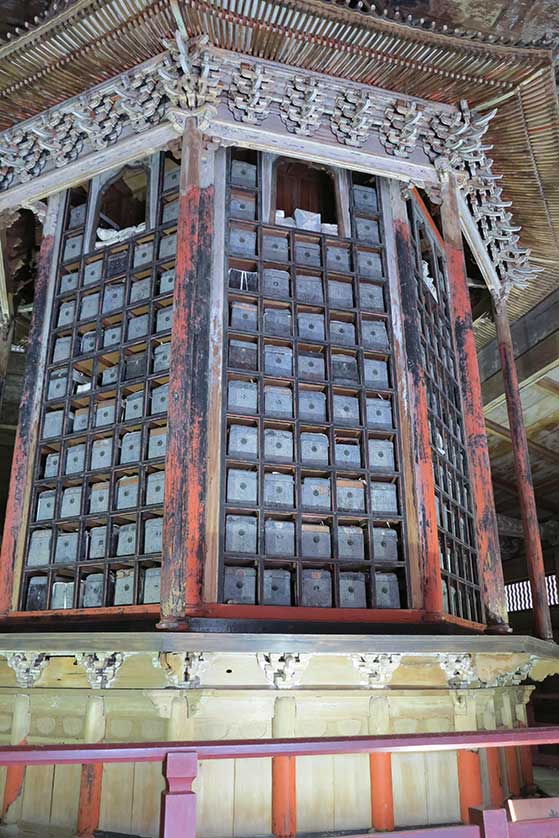 Buddhist scriptures stored in the Issaikyo-zo

The Akaiya gives the temple its name of "Three Wells". It was from this spring that the Emperor Tenmu, Emperor Tenchi and Empress Jimei all received their first ritual baths. The wooden structure dates from 1600.

The Bell Pavilion contains a bell said to have the best sound of any bell in Japan. the bell was cast in 1602 and was the subject of a woodblock print by Hiroshige: Evening Bell at Miidera.

The Bishamondo enshrines Bishamon, sometimes known as Bishamonten, sometimes Tamonten. Leader of the Shitenno, the four heavenly kings that guard Buddhism, the patron of warriors, and also one of the Shichifukujin, the Seven Lucky Gods.

The Kannondo, enshrines a statue of Nyoirin Kannon dating back to the Heian Period. This is temple 14 on the Saigoku Kannon Pilgrimage, probably the oldest pilgrimage in Japan. Originally established on the top of the mountain in 1072, in 1481 it was relocated to its current position to allow women to worship as they were not allowed onto the mountain itself. The current structure dates to 1689. On clear days, there are views from the terrace here over Lake Biwa.

The Reishodo contains another bell thought to date from the 8th century. Also called Benkei's Bell, legend has it that the warrior monk Benkei tried to carry off the bell to Enryakuji.

The Toin is the mausoleum of Enchin, known as Chiso Daishi, after his death. The Toin is flanked by a three-storied pagoda. 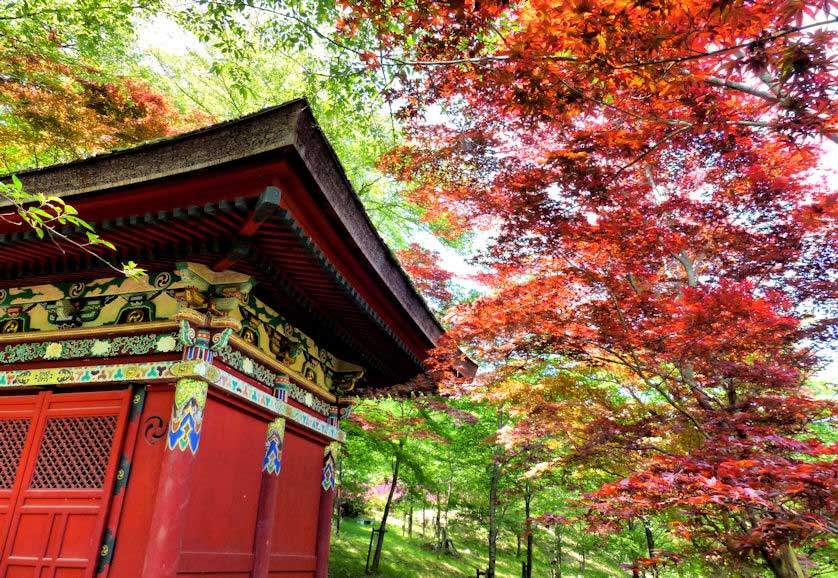 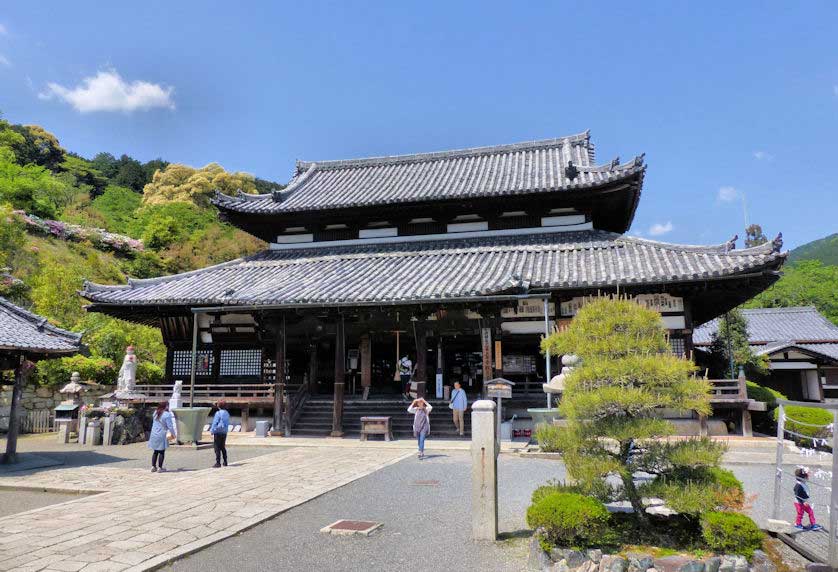 For an extra charge visitors can enter the modern art museum which contains work by the famous Kano school of artists. These include screens and sliding doors by Mitsunobu Kano dated from 1600.

The Biwako Canal runs under the temple complex and visitors can see it on their right as they walk from Miidera Station to the main gate. In spring its banks are lined with cherry trees in full bloom. The canal brings water to Kyoto and runs via an aqueduct through Nanzenji Temple.

Just outside the temple grounds is the Otsu City Museum of History (大津市歴史博物館). The museum is open from 9 am to 5 pm and has exhibits on Buddhist culture, Lake Biwa and the archeology, folklore, history and commerce of this area of Shiga Prefecture.

Homyoin Temple, a sub-temple of Miidera, contains the grave of Ernest Francisco Fenollosa (1853-1908), an art critic and Japanophile who came to Japan in 1879 and taught at Tokyo Imperial University (present-day Tokyo University). An admirer of Japanese art and culture, Fenollosa converted to Buddhism. Though, he died in London, it was his wish that his ashes be taken to Japan and interred in Miidera.

Omi Shrine is just a few stops north of Miidera on the Keihan Ishiyama Sakamoto Line. Visiting both is an easy half-day trip from Kyoto. 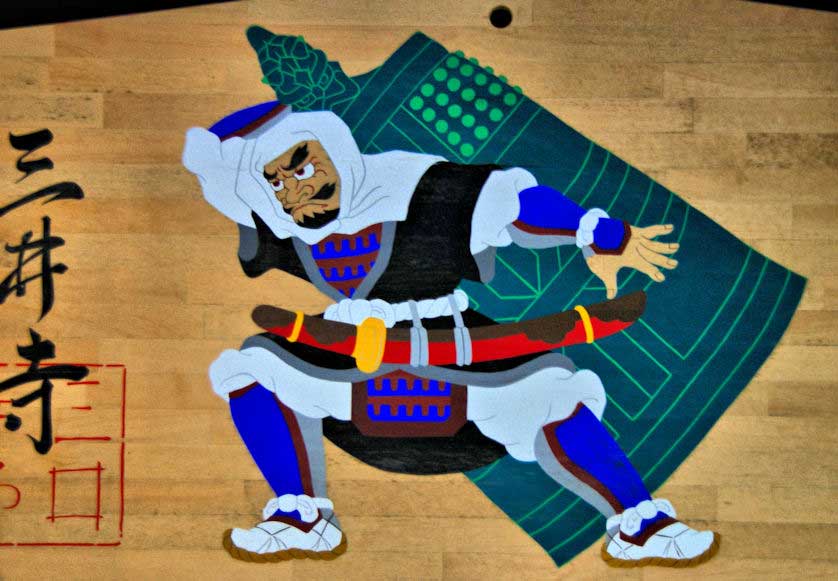 Benkei's Bell, Miidera; when the warrior monk Benkei tried to strike the bell on his way back to Enryakuji, it cried out in Kansai dialect that it wanted to return home, so Benkei duly returned it 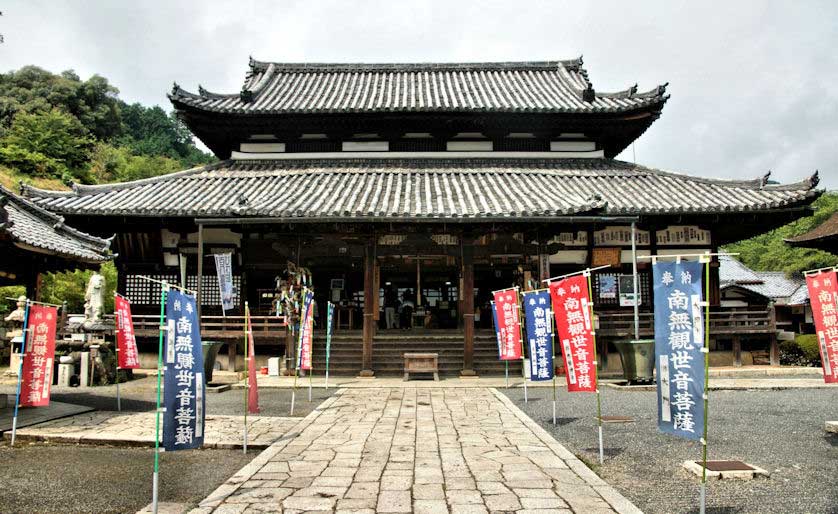 Another route is to take the Biwako Line from Kyoto Station to JR Otsu Station (2 stops; 10 minutes) and take a Keihan bus to the Miidera stop.

From Sanjo-Keihan Station take a Tozai Line train of the Kyoto subway to Keihan Hamaotsu Station and transfer to the Keihan Ishiyama Sakamoto Line to Miidera Station.

From From Yamashina Station in Kyoto there are JR trains to Otsu Station or Keihan trains to Hamaotsu Station. 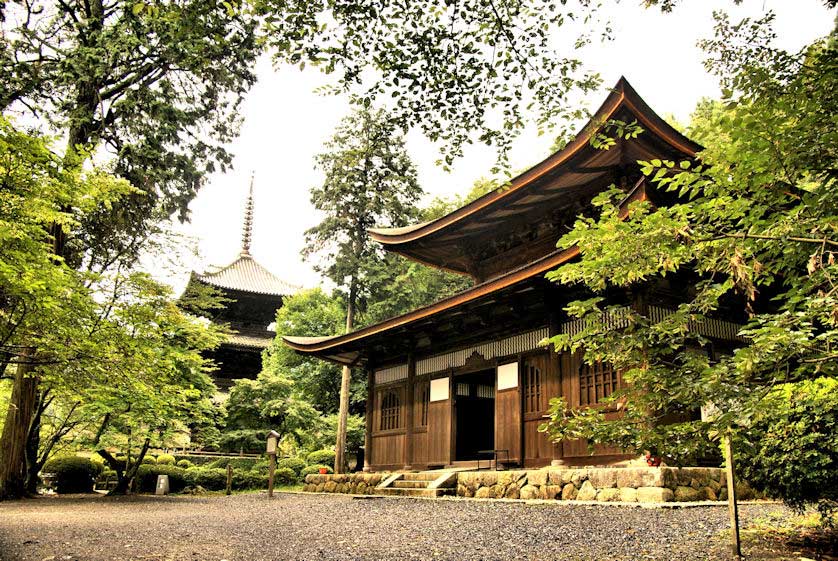