Tenryuji is the most important temple in the Arashiyama area of west Kyoto. Tenryuji is the head temple of the Tenryu sect of Rinzai Zen Buddhism and is ranked first among Kyoto's top five Zen temples, or Gozan: Nanzenji, Shokoku-ji, Tofukuji and Kenninji (although this ranking has changed over time). 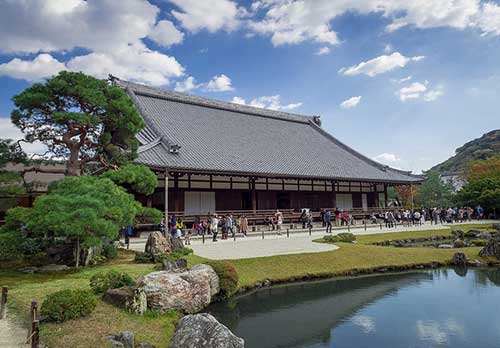 Tenryuji was created in honor of Gautama Buddha, and was founded by the Shogun Ashikaga Takauji (1305-1358).

Prior to the founding of Tenryuji, the Empress Tachibana no Kachiko, who was the wife of the Emperor Saga, created a Buddhist temple named Danrin-ji on the exact same spot. In the mid-thirteenth century, however, Emperor Gosaga and his son Emperor Kameyama converted the grounds into an imperial villa. 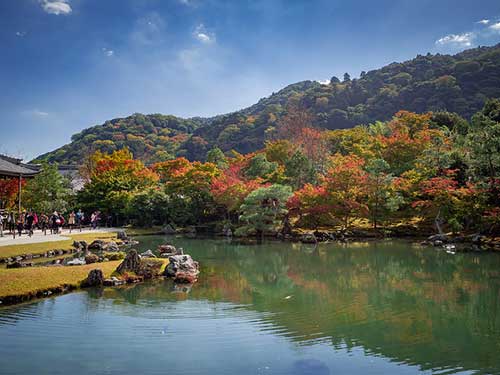 Ashikaga Takauji later converted the villa into a temple in order to hold a memorial service for Emperor Go-Daigo, for whom he had once fought as a general but later turned against, and thus appease the soul of the deceased emperor.

Tenryuji Temple was enormously successful and grew to contain 150 sub-temples. Fire, however, decimated the temple no less than five times in the 14th and 15th centuries, then again in the Onin War, again in 1815, and many temple buildings and artifacts were then lost during the Hamaguri Rebellion in 1864. Tenryuji as it stands today dates mainly from the Meiji Period. In 1994, Tenryuji became a UNESCO World Heritage Site. 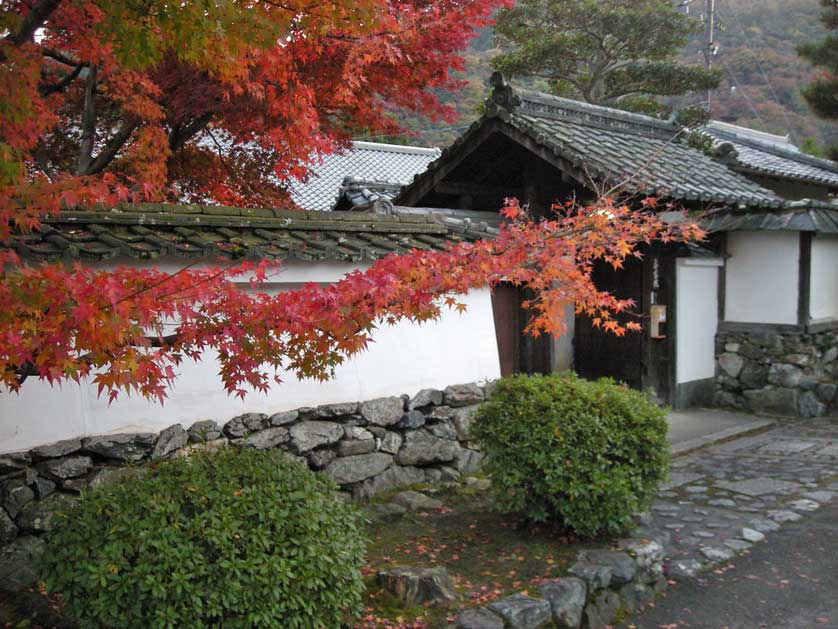 Tenryuji Temple in Kyoto is famous for the beauty of its autumn maple leaves. 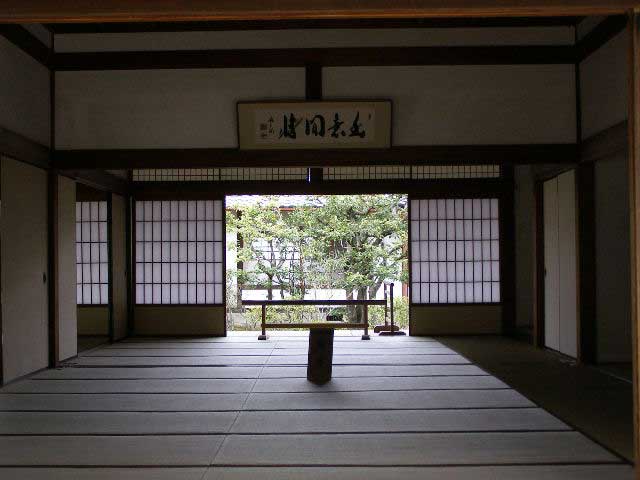 Tatami-mat room at Tenryuji Temple looking out over a garden.

The Hyakkaen garden at Tenryuji is particularly popular in spring and fall. Another highlight of Tenryuji Temple is its hanchi or square entrance pond filled with lotus flowers.

Tenryu-ji contains various Important Cultural Properties, including portraits of the temple's first head priest, Muso Soseki (1275-1351); a wooden carving of Gautama Buddha, and numerous illustrations. The Hatto Hall has a huge circular Unryu ("Cloud Dragon") painted on its ceiling. The Sogenchi pond and garden is one of the oldest landscape gardens in Kyoto, created by Muso Soseki and noted for its borrowed scenery effect. Muso Soseki also created the gardens at Kokedera (Moss Garden) to the south in Katsura.

The Emperors Gosaga and Kageyama are both buried here within the temple.

Two sub-temples of Tenryuji Hogon-in and Kogenji only open for a few weeks in spring and autumn and can be visited on a combined ticket. Hogon-in is known for its rock and moss stroll garden as well as its fall colors.

Kogenji is also famous for its Japanese garden - a karesansui, (rock and stone) garden in the main building. The pillars of the main hall still bear the sword marks left by samurai from Choshu (present day Hagi), who practiced their swordsmanship here back in the 1860's. 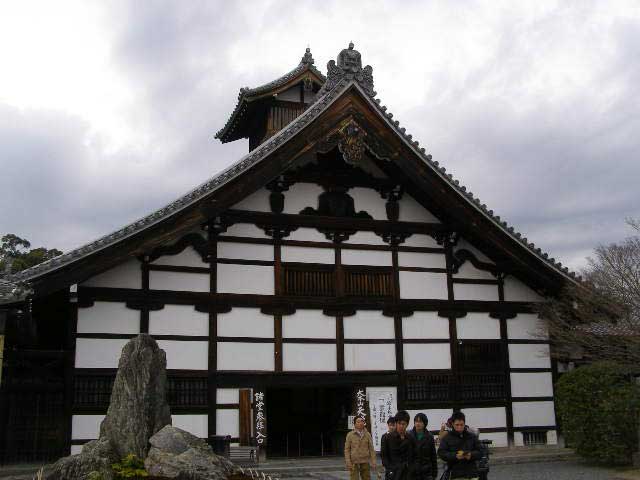 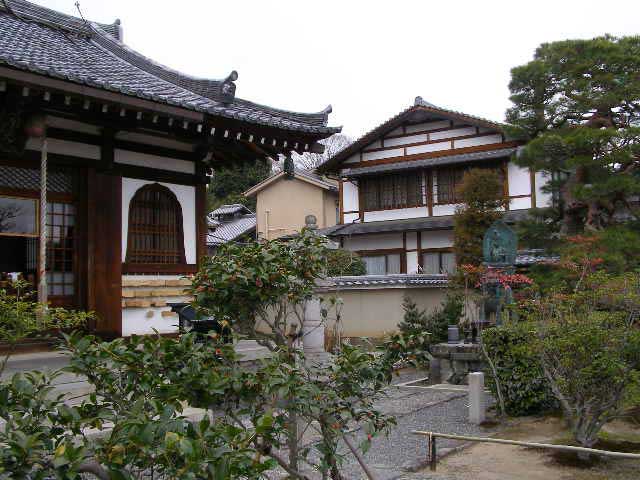 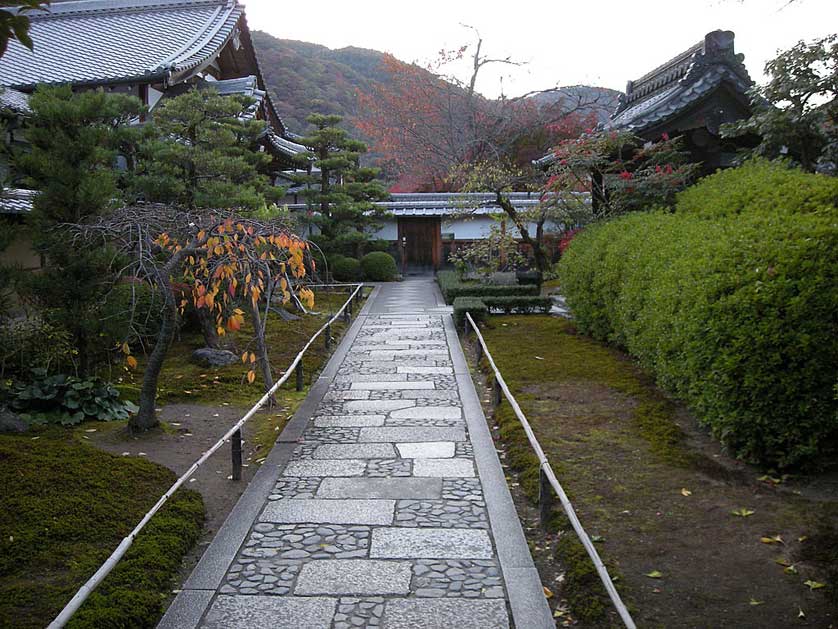 The grounds of Tenryuji Temple also include a noted Zen vegetarian restaurant, Shigetsu, serving classic shojin ryori set meals (3,000 yen, 5,000 yen or 7,000 yen). The restaurant is open daily from 11am-2pm and can seat up to 250 guests in tatami-floored rooms with views of the garden.

The 2016 Michelin Guide for Osaka and Kyoto designated Shigetsu as a Bib Gourmand - an eatery serving "exceptionally good food at moderate prices."

If you would like us to reserve this restaurant or any other in Japan for a small fee please contact us.

Tenryuji is just two minutes from the Keifuku Line's Arashiyama Station on trains from Kitano Hakubaicho or Omiya stations. Or take a city bus to "Keifukuarashiyama," bus #28. Alternatively, Tenryuji Temple is a 7-8 minute walk from JR Saga Station on the JR San-in Main Line (Sagano Line) from Kyoto Station.

By bicycle from Arashiyama.