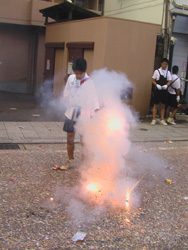 Nagasaki sizzles with colors, sounds, and aromas during Obon, the Festival of Spirits. The Obon festival reaches its pinnacle of excitement during the third night's final frenzied event, which is called Shoro Nagashi, the Spirit Boat Procession.

During this three-day festival in mid-August, families burn incense, light lanterns, and explode thousands of fireworks to welcome ancestors back to earth from the spirit world, and to send the spirits of the recently deceased off to the spirit world.

Nagasaki residents reverently worship their ancestors with more clamor and explosions than anywhere else in Japan. Shoro Nagashi is loud, solemn, hectic, and sorrowful, but it is also a crazily joyous time. During Shoro Nagashi, daily routines in Nagasaki are set aside. Many streets are closed for traffic, and the clamor of gongs, drums, and explosions roll in sound waves for miles up and down Nagasaki's famous steep slopes.

Almost everyone who has had a loved one pass away in the last year has built a spirit boat to transport the spirit of their dear departed friend or relative. People push, pull, and carry these lantern-lit spirit boats from their homes to a boisterous parade in the center of town. These boats carry the spirits from their earthly homes and the festival sends them to heaven. At the end of the procession, the spirit boats are destroyed. 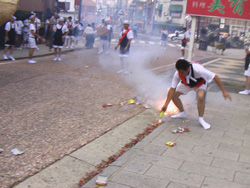 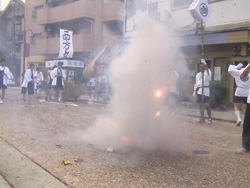 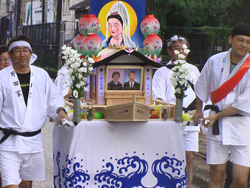 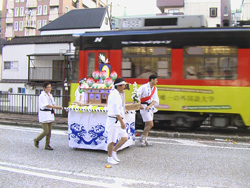 Preparations for the Shoro Nagashi festival generally start a month before Obon. Warehouses, temples, shrines, parking spaces, and the sides of streets become zones of creative activity as artisans or amateur family members construct the spirit boats. The fragrances of freshly cut rice stalks, split bamboo, and broken cedar branches, which are used for decoration, waft from the boats under construction. Family members and friends gather these supplies from the fields and mountains of Nagasaki.

Mourners build each boat with a reverence and design them to reflect the achievements and interests of the deceased. The boat for a politician was built in the shape of the Japanese Diet building. 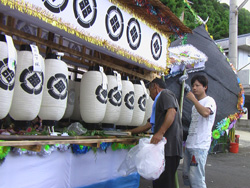 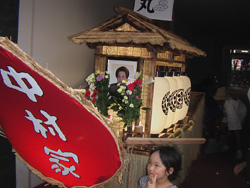 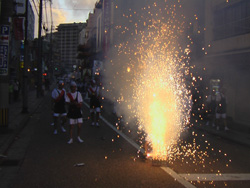 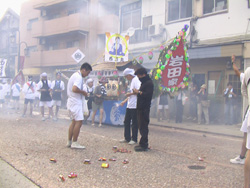 A soy sauce maker's boat carried large casks of soy sauce. Especially touching, were spirit boats made for young children. Some carried their favorite stuffed animals, dolls, and other toys. Many boats bore a large picture of the dearly departed on the front, even those boats that were created for family dogs or cats.

The boat for Taigon Baba, a Buddhist monk at a temple in Nagasaki, was representative of a traditional-style spirit boat. Decorators had framed the photograph of Mr. Baba with chrysanthemums and orchids, and the name of his temple was painted on the prow.

The fifteen-meter-long boat held 100 silk and paper lanterns, each marked with his family emblem. The roof was covered with fresh cedar branches and an artist had written Buddhist scriptures in calligraphy on a sail.

Friends and family spent over 2,000,000 yen (approximately $26,000 US) to build and decorate the boat. The Baba family also purchased, for each of the fifty friends and relatives who helped in the procession, an entire set of festival attire replete with a set of ear plugs, shoes, underwear, shorts, and light jackets which were imprinted with the Baba family emblem.

Mr. Baba's spirit boat, along with hundreds of others from different neighborhoods, slowly descended Nagasaki's curvy, steep slopes. Numerous processions joined together along the path to the town center. Firecracker and incense smoke rose sporadically. Normal city noise was penetrated by the chaotic blasts of firecrackers.

Each spirit boat was unique, and mourner behavior varied, too. Some mourners wore black and carried spirit boats with stiff dignity. Others cried. Some mourners marched in unison and repeated Buddhist chants. However, many concentrated on lighting and tossing firecrackers into the sky. The Baba family exemplified both the solemn religious nature and the wild abandon that are important elements of Shoro Nagashi. 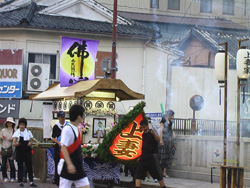 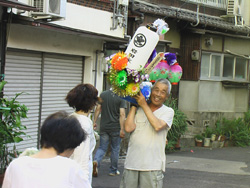 Dressed in his gray monk's garb, Mr. Baba's middle-aged son Taiken, who took over as head of the family's Buddhist temple, marched with silent dignity at the front of his father's boat. With the exception of chanting, he was silent for most of the procession. However, his children and many friends were lighting firecrackers and fireworks around the spirit boat. The children carried a cart that was literally full of thousands of firecrackers. Meanwhile, hundreds of other people were exploding their own fireworks.

The streets were covered with a thick layer of the spent paper of fireworks. The acrid smell and smoke was as inescapable as the noise. Passersby who had not remembered their earplugs covered their ears with their hands. The darkness of night descended on the long line of mourners moving through downtown Nagasaki, but explosions lit up the sky and the faces of everyone attending the procession.

Eventually, the processions completed the journey to Nagasaki Bay, where a large crane with powerful metal claws waited. In the past, Nagasaki residents would light the boats on fire and let them drift away, but that is no longer permitted, and the spirit boats are nowadays destroyed.

Before destruction, mourners carry away family photographs and other important reminders from the boats. The metal claws drop down, crushing the boats into splinters, which are later carried to a dump. As for the spirits, despite the use of modern machinery to destroy their boats, they rise into the heavens along with the prayers, chants, songs, and raucous cries of their mourners.

An earlier version of this article was originally published in the November 1997, Vol. 21 No.248 edition of Eye-Ai magazine 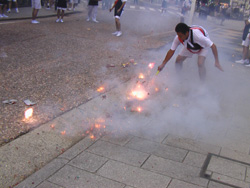 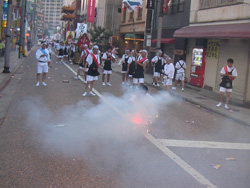 From $38 per person
Discover all our activities in Nagasaki (151)

From Chinese New Year to the 15th day of the lunar calendar, the Lantern Festival brightens the streets of Nagasaki.

Kunchi is the name of a festival held every year in autumn (October 7-9) at Suwa-jinja, a Shinto shrine in Nagasaki.