Shodoshima, the second largest island in the Seto Inland Sea, is, like everywhere else in Japan, dotted with numerous Buddhist temples. Like many areas of Japan it is also home to a pilgrimage that takes in many of these temples, however the pilgrimage on Shodoshima has a very high number of an unusual type of temple, that is to say, temples built into caves high up in the mountains.

These were originally places where monks would come and practice austerities and esoteric rites and reaching them was very difficult, often involving scaling rock faces by using chains.

Nowadays roads and stairs make them much more accessible. Even if you do not take part in the pilgrimage, these temples are worth visiting, and mostly are grouped together, so several can be visited in one go. 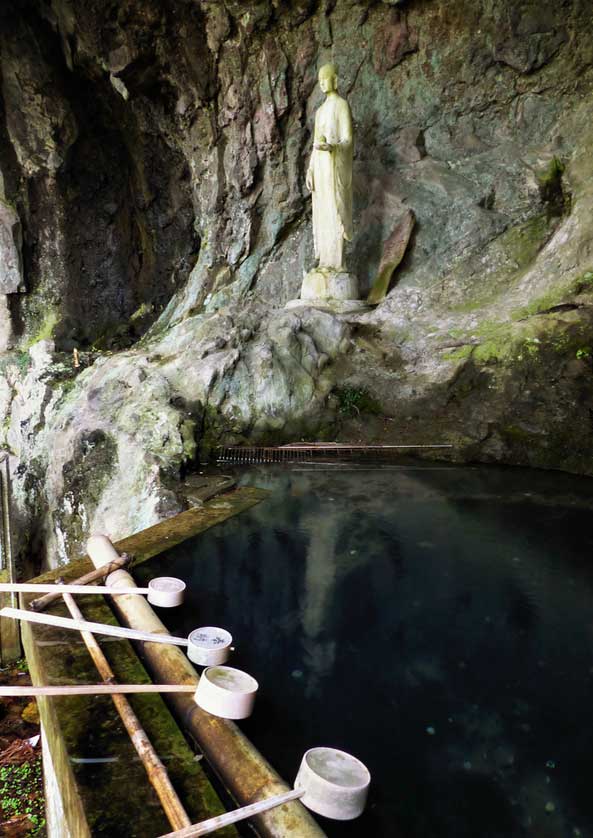 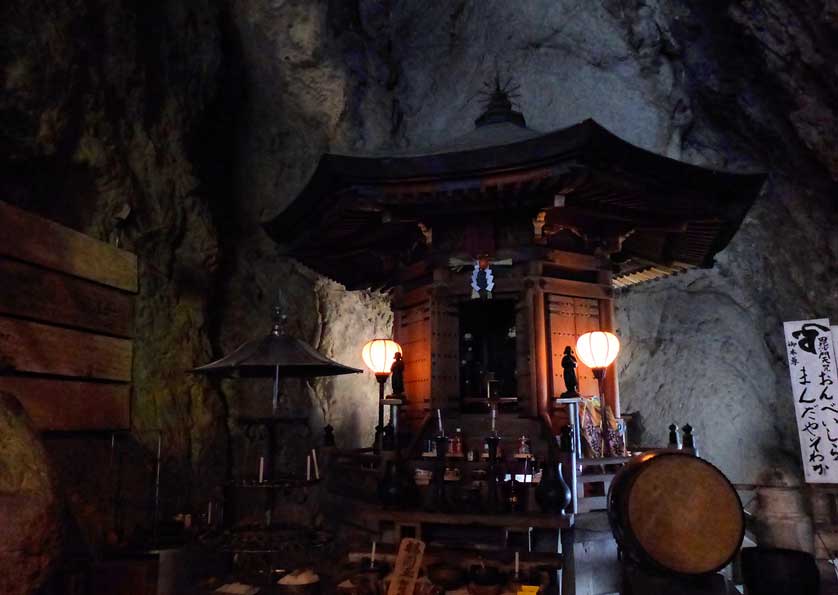 The shrine contains a statue of Bishamonten in Zaundo cave at Dounzan Temple, Shodoshima

The first group of three temples are located in the southeast of the island on a small group of peaks centered on the 434 meter high Goishizan above Sakate Port.

In the middle of the three is Dounzan, temple number 1 of the pilgrimage and traditionally the starting point. Set against a sheer cliff, the first building is the Daishi-do, dedicated to Kobo Daishi, the famed founder of Shingon Buddhism and to whom the pilgrimage is dedicated.

From here, stone steps lead up through some huge ancient cedars to a spring in the base of the cliff. According to the legend, this spring was created by Kobo Daishi himself by striking the ground with his staff, a story that occurs at dozens of springs across Shikoku, the home to the original Kobo Daishi Pilgrimage.

Next to the spring is a slender statue of Kannon, known as the Goddess of Mercy and one of the most popular Buddhist Bodhisattvas. Dounzan is also known Geshi Kannon, "Summer Solstice Kannon" because for several weeks either side of the summer solstice the shape of the rocks and the angle of the sun cause a figure to appear on the cliff face that looks like Kannon.

From the spring the path goes along the cliff face past various statues and a bell tower towards the temple's main hall, which is not a building but a large cave, Zaundo. Steps lead up via a crevice in the cliff to a tall open cave.

Towards the back of the cave and illuminated by an opening in the cave wall is the gohonzon, the main enshrined deity of the temple. The statue is inside an octagonal, wooden roofed shrine but even with the doors open it is hard to make out the statue in the dark interior, but it is Bishamonten, one of the Four Heavenly Kings and a favorite of the samurai class, as he is perceived as somewhat of a god of war.

Walking behind the shrine leads to steps which go down and then back out of the cave passing the opening through which views over the island and sea can be glimpsed. 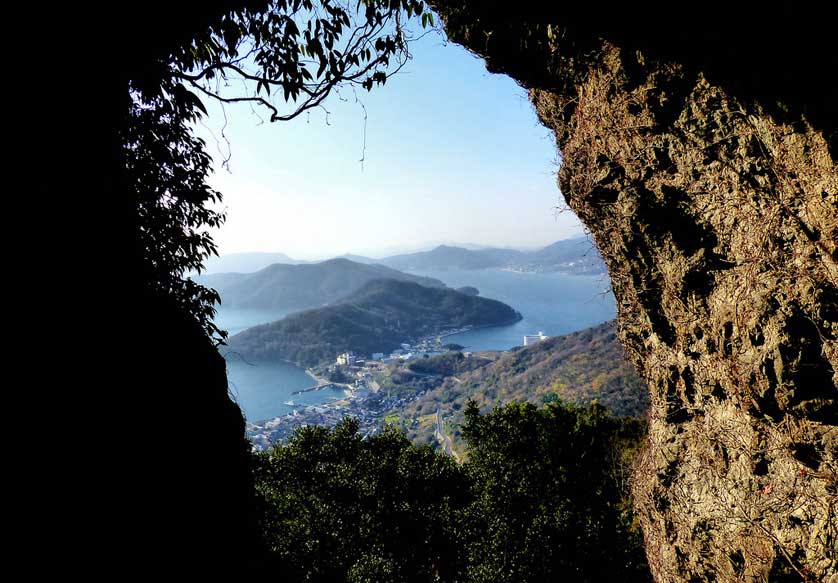 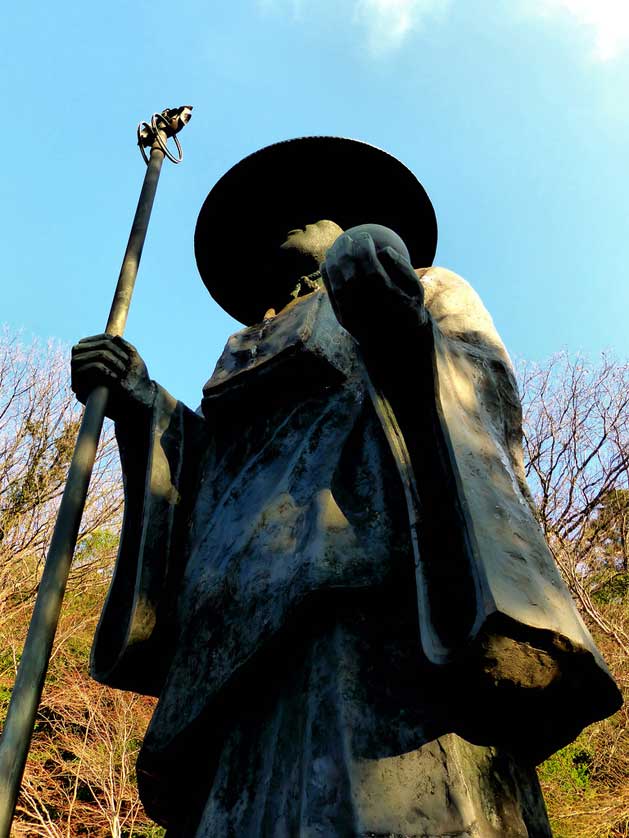 North a few hundred meters along the mountain road in front of Dounzan is the drive way to temple number 2 on the pilgrimage, Goishizan.

The driveway is lined with dozens and dozens of identical statues and leads to a large open area in front of several large statues of Kobo Daishi. From this viewing platform there are expansive views over the island.

In the building underneath the statue is an altar and Buddha statue, and one might be forgiven for thinking that this is the temple, but off to the left is a torii with steps leading up the hillside and it is up there you will find the temple's main hall.

After a hundred meters or so the path splits, one going down, the other carrying on up, and taking the path down soon brings you to a small building protruding out from the exposed rock. Going in the building then takes you into the cave, Hokutsudo, the main hall.

In the dark interior is an altar and numerous statues lit only by candlelight. The main deity is the fierce-looking Fudo Myo-O, who appears repeatedly at several other of these cave temples on the island.

There is also a small shop here selling candles, incense, charms etc as well as books and maps on the Shodoshima Pilgrimage. Of this group of three temples, only this one is usually manned.

Heading out and retracing your steps to where the path forks, now take the other fork and you will soon pass by a small shrine. Below the shrine is a steep rock slope with chains. This was the original route up here for ascetics and pilgrims. Just past the shrine, the path ends abruptly at a stone Fudo Myo-O with truly magnificent views.

If you look around you will see that you are standing on a narrow promontory with sheer drops on three sides. If you look up the mountain, you can make out a small shrine literally perched on top of a rock outcropping much higher up. This is a Konpira Shrine, and the mind boggles at how anyone managed to get up there to build it. 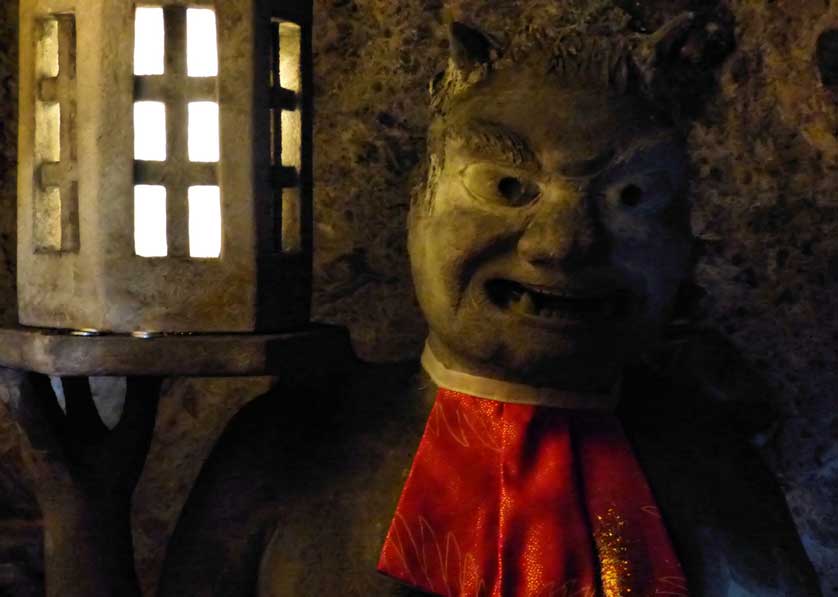 A demon holding a lantern illuminating the cave at Goishizan Temple, Shodoshima

The final temple of this group of three, Hayabusasan, can be found by going back along the road to Dounzan and carrying on south after it narrows to a path.

After a few hundred meters, look up in the cliff and you can see a tiny Kannon shrine literally wedged into a narrow crevice high up, and once again wonder  just how it was that anyone got up there to construct it.

The path curves around to the south side of the mountain and now the views are over the sea to Shikoku and Awajima in the distance. There is a small viewing platform here but be careful as the wood has decayed somewhat over time. 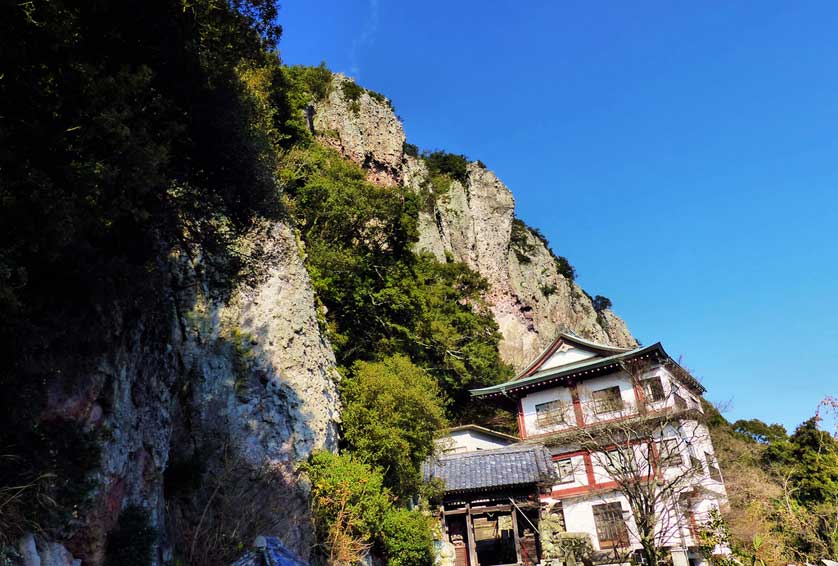 Arriving at Hayabusasan the main temple is to the left but just below to the right is the new Daishi-do on a concrete platform. 33 Kannon statues representing the Bando Kannon Pilgrimage are lined up along with other statues.

The main temple is entered through a Nio gate, containing a pair of old Nio statues. Another 33 statues this time representing the Saigoku Kannon Pilgrimage line the way.

There is a big, relatively new, three story concrete building that was once a lodging house but is now closed up. The atmosphere here feels a little abandoned.

The main hall is tucked up against the cliff face and the interior goes into a shallow cave. The main statue is a Kannon as this is the Okunoin, the "inner shrine," of the temple down below in the village. The views here are panoramic but the buildings are somewhat neglected. 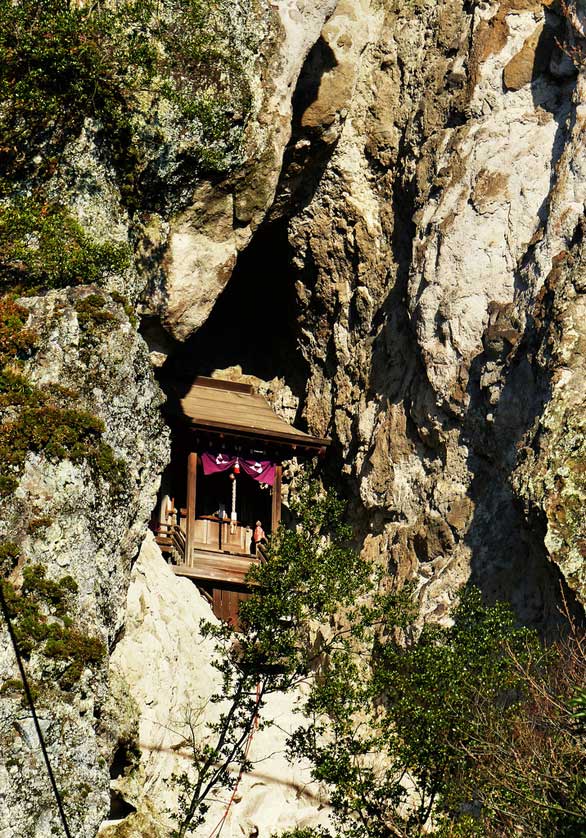 If you are not walking, then the easiest way to reach the temples is by rental car. The road from Noma is narrow and windy, but small tour buses take pilgrims up so it's not too bad. No public buses go up the mountain. A taxi from the Marukin Soy Sauce Factory and museum is about 1,200 yen.

I can possibly answer some questions on the pilgrimage. If you wish to contact me please use our contact form.