A sweltering day out at Koshien for the national high school baseball.

The boys of summer - Will Yong sweats buckets over a hot plate. 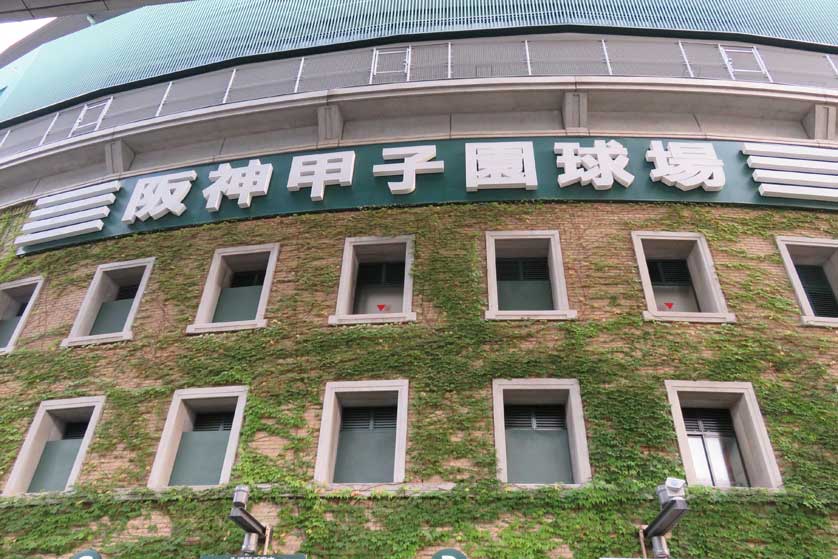 Steeped in the history of Japanese baseball and shrouded in a dignified
coat of ivy, Koshien Stadium, is the location of the annual Zenkoku Koko Yakyu Senshuken Taikai or National High School Baseball Championship Series. But so bound up is this nationally followed event with it's location that commonly, it is known simply as 'Koshien'.

Easily surpassing in popularity any other high school sporting event, anywhere in the world, tradition and symbolism are just as important at Koshien as the sporting spectacle. It attracts up to a million spectators over the ten days, not to mention millions more following proceedings on television, radio and in national newspapers. Many who take little notice of the big leagues take an active interest in Koshien, not least
of which are the hordes of high-schoolers that are bussed to Nishinomiya from all over the country to support their team.

High school baseball is played with a strict code of conduct that has the teams bowing to each other before and after games and pitchers tipping their hats when they hit the batters. It's a far cry from the gum-chewing veterans of the US Major Leagues.

Outside the stadium, while adults, families and groups of friends file past to the free-to-enter outfield stands, large groups of high school
students mill around the entrance to their designated cheering area, uniformed and awaiting orders. Oendan, as the fan organisations are known, number in the hundreds and take their job very seriously indeed. The brass players, drummers, cheerleaders and rank-and-filers are every bit as tightly
organised as the pitchers, batters, catchers and managers out on the field. 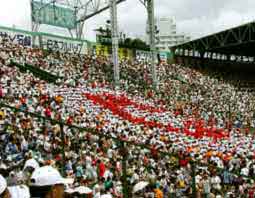 The stand reserved for Chiben High School from Wakayama sports the teams bold 'C' in matching red caps on a background of white shirts. Frilled with shiny green pom-poms, a square of support for the opposition, Toho, sways right to left and left to right in alternate rows with all the precision of synchronized
swimmers. The caller raises a board with the title of the next number, the drummer sets the pace, pom-poms shimmer and the band begins to play. Respectfully, the opposing bands play only when their team is batting so as not to cause any unnecessary friction.

The fact that Koshien takes place in the hottest part of the year tells you much about the spirit of the event. Built in 1925, before the age
of air-conditioned domes, the field at Koshien is an unforgiving place to be out in the summer sun. Especially if you're wearing a jersey buttoned up to the collar worn over a tight T-shirt and trousers tucked into thick socks and boots - as high school baseball players have done since the first Koshien in 1915.

Despite the heat, players have to keep their cool. High school baseball is played with a strict code of conduct that has the teams bowing to each
other before and after games and pitchers tipping their hats when they hit the batters. It's a far cry from the gum-chewing, tough-talking style
of the US Major League.

Neither do the fans get it easy. Only one stand is covered with any sort roof. Many of the darker skinned men and boys in the audience go topless, flouting, incidentally, etiquette advice from the British Foreign Office what is acceptable in public places and what isn't. Women are more
careful to protect their paleness with sunhats, parasols or simply by mummifying themselves with white towels over every square inch of uncovered
skin and hair.

Spare a thought too for the oendan whose responsibility it is to keep the trumpets noisy, the plastic clappers clapping and the pom-poms
pom-pomming throughout games that can be up to 3 hours long. There's no
place for despondency, the cheerers have to keep up a never-say-die attitude
even if the team is going down.

All this and the seats are nothing more than painted wooden planks bolted to concrete steps.

Luxury, however, would not be appropriate to Koshien. More important
than the outcomes of the games or the grandness of the occasion is gaman, a notion encompassing endurance, patience, perseverance and the strength
to carry on even in adverse conditions. Gaman occupies a special
place in the Japanese national consciousness. And gaman and Koshien go hand in hand like flag-waving and the 4th of July. 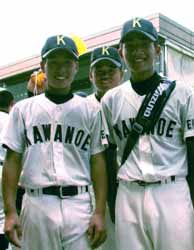 Of the more than 4,000 teams that enter the national high school baseball every year, only 49 make it through the preliminary rounds to reach Koshien. But all of them will have strived samurai-like like through training regimes with all the sensitivity of military drills.

Dictatorial managers, back-breaking physical work and a timetable that
relegates other pursuits to a very distant second place are all par for the course. The time, effort and sheer physical pain that players put into the team - or, if you like, put up with in order to get into the
team - are all very real but, when it comes to Koshien, they are also heavily romanticized.

When people think of Koshien, they picture brave boys with an unflinching resolve to give themselves to the team for nothing more than the glory
of the game which is sometimes hard to square with the facts.

Scouts for professional baseball teams, now from the US as well as Japan, descend on Koshien for its rich pickings of players on the cusp of availability. It has been known for players to give themselves pain-killing injections in order to play through injury as the pressure to perform has increased. In addition, schools with good records at Koshien are aggressive in their recruitment of youngsters with potential.

But aside from these influences, the emotion that individual players put in to their game is plain to see. One of the enduring images of any day at Koshien is the winning team bounding over to their cheering section to celebrate while the losers cry bitter tears of defeat, beating the walls and falling to their knees, digging the sacred Koshien sand to remember their day by. As long as there are boys who dream of glory there will always be Koshien.