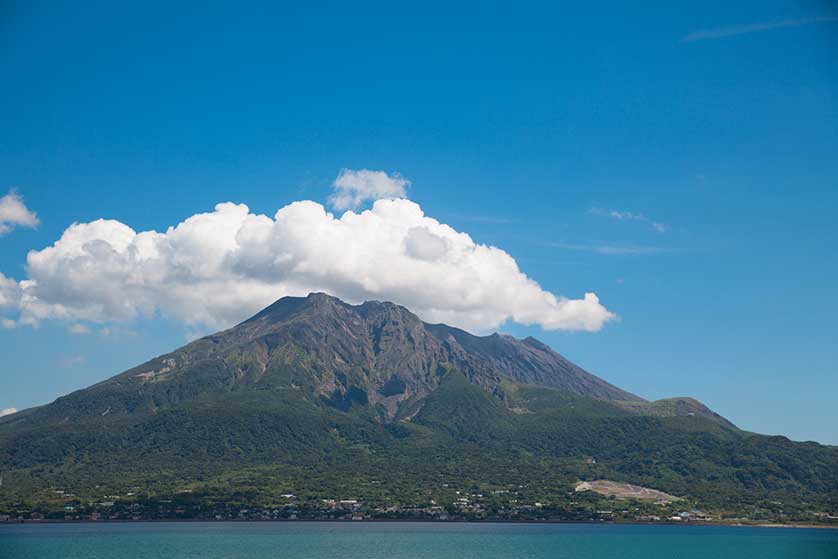 If you're going to Kagoshima...

Sakurajima is a nice place to spend a few hours if you are planning a trip to Kagoshima. This active volcano has a great history and some interesting places to explore.

There is an omiyage (gift) shop where you can purchase an assortment of products made from these two famous crops. Sweet potatoes and biwa (loquat) are also specialties of Sakurajima. 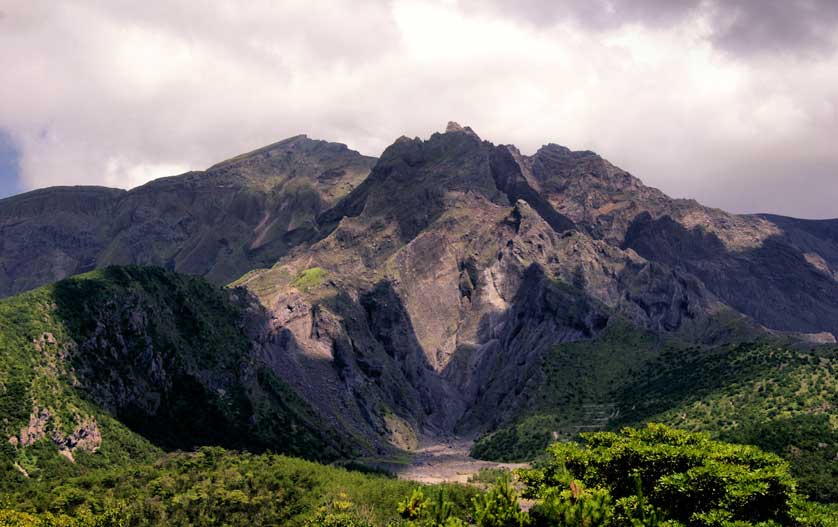 The first recorded eruption of Sakurajima was in 708 and the volcano has been in almost constant activity since then.

One of the most interesting facts about Sakurajima is that it was itself an island until 1914, when lava flows from a large eruption that year spread and hardened, connecting the island to Osumi Peninsula.

Ash falls up to 143 times per year, depositing an average of 100mm annually.

People can be seen walking around the town, or sometimes even in Kagoshima City, with umbrellas to protect their clothes and skin from falling ash.

The population of Sakurajima is aging and decreasing, with most adults engaged in either agriculture or fishing. There is no high school on the island and students must make the short ferry ride to Kagoshima. Various concrete shelters dot the island in case of the need to evacuate the island at short notice. 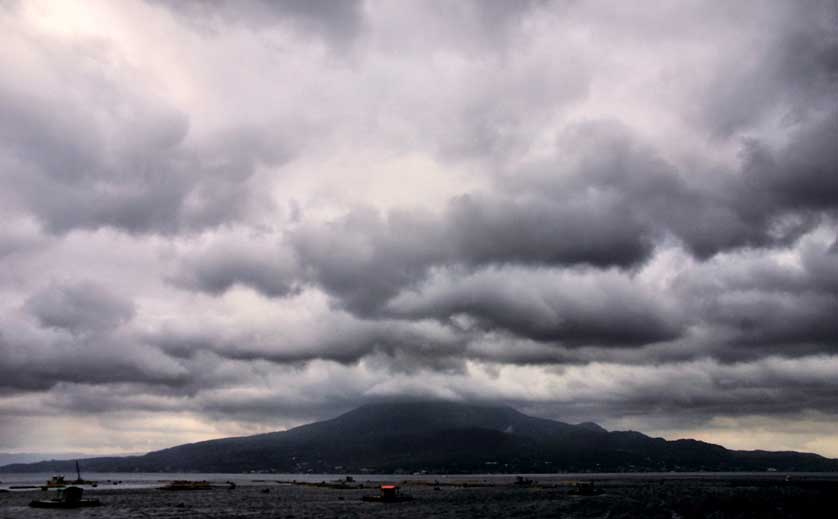 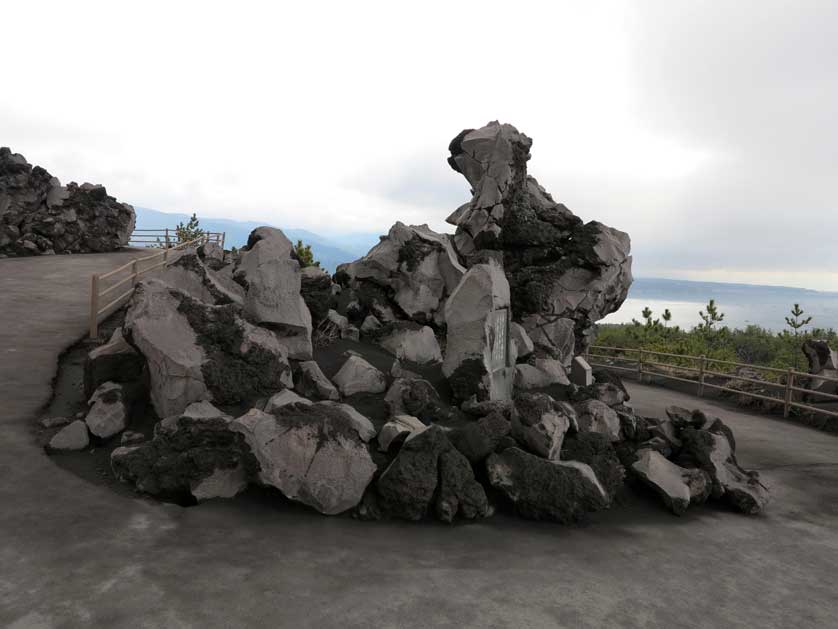 What to see on Sakurajima

The Sakurajima Visitor Center is open from 9am-5pm daily, except Mondays. It offers simple exhibitions that provide information on the history of the volcanic eruptions, the evolution of its plant life, tourist information, and disaster prevention. It also has a high-vision theater, georama, and computers in which you can interactively discover information about the island.

You can get a nice sense of the history and feel of the island with a stroll along the footpaths that wind through the desolate lava plains of Sakurajima.

There are small shrines and several lava formations to explore.

The eruption of 1914 buried the gate of the Kurokami Shinto shrine in volcanic ash. You can explore the remains of the shrine and observe some of the damage that has been caused by volcanic eruptions in Sakurajima. 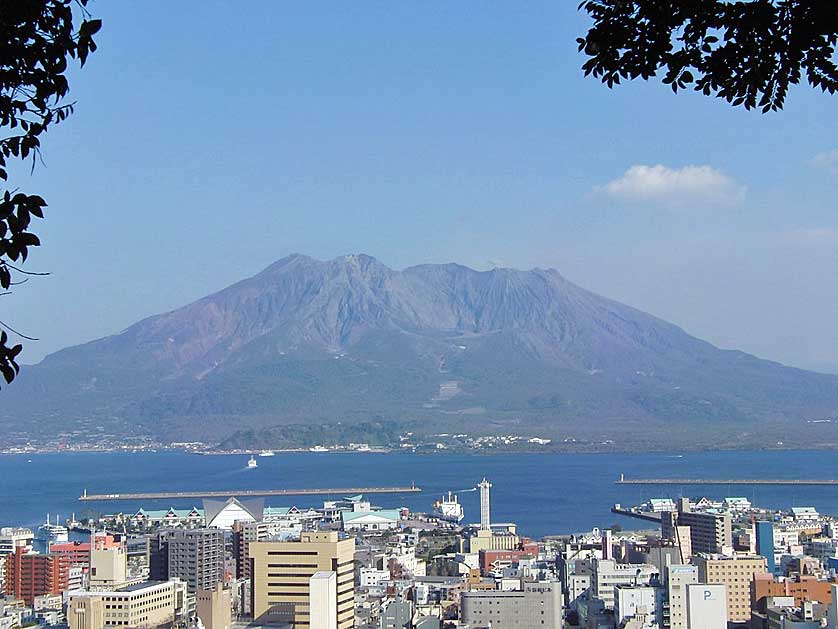 Sakurajima volcano in Kagoshima Prefecture moments before it erupts 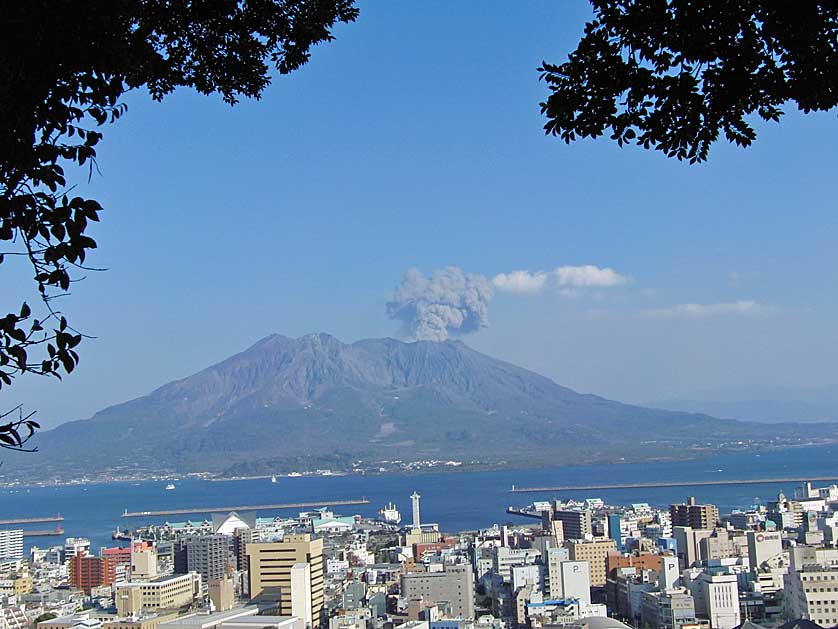 Sakurajima volcano moments after it erupts sending ash into the air

The Taisho Lava Field has an esplanade that extends 3km west from the ferry terminal, from the coastline to the Torishima Observatory. It has nice fishing spots, where you can catch girella and scorpion fish, and is a nice place for a stroll and shell collecting. There are also monuments of famous haiku poets spotted throughout.

Torishima was located 500m off the coast, and when the eruption occurred in 1914 connecting Mr. Sakurajim to Osumi peninsula, the shrine was completed buried. The observatory and memorial stone have been erected 2km from the ferry in Taisho Lava Field.

The Yunohira Observatory is almost halfway up Mt. Sakurajima and at 373m above sea level, you can see the dramatic view of Minamidake (South Peak). Below you can see Kinko Bay and the busy streets of Kagoshima.

It is undoubtedly the best scenic point on the island. Arimura Lava Observatory also offers nice views of the island, although not quite as dramatic. 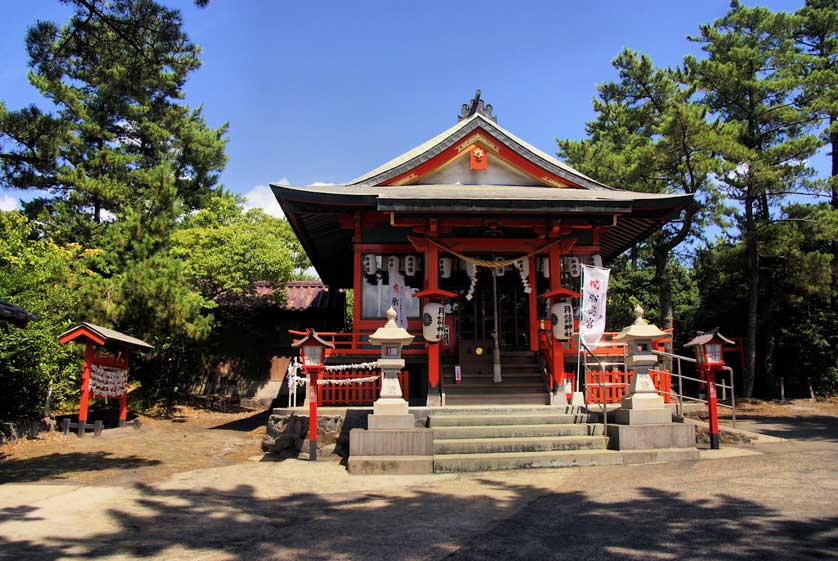 Tsukiyomi Shrine is the main shrine on Sakurajima and is located a 2 minute walk away from the ferry port.

Tsukiyomi Shrine was founded in the 8th century, and the main deity enshrined here is Tsukiyomi, the God of the moon and sea. Also enshrined here is Konohanasakuya, a princess from the ancient myths who married Ninigi, the grandson and emissary of Amaterasu who descended from heaven to found the Yamato line. She is the deity of Mt. Fuji and other volcanoes and it is believed Sakurajima is named after her. From the shrine there are nice views over the bay to Kagoshima. 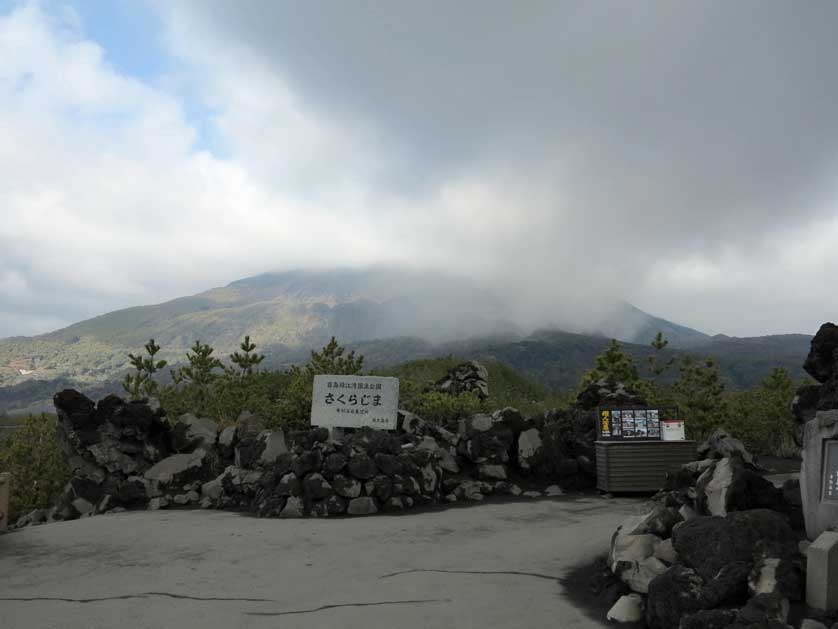 Running SakurajimaPeople travel from all over to Japan to take part in these 5km, 10km, and half-marathon races. The event usually takes place in the first half of March.

Fire Island Festival (Hinoshima)Come and watch taiko drum performances, local arts and singing, and a huge fireworks display at a special stage at the Lava Ground in July. 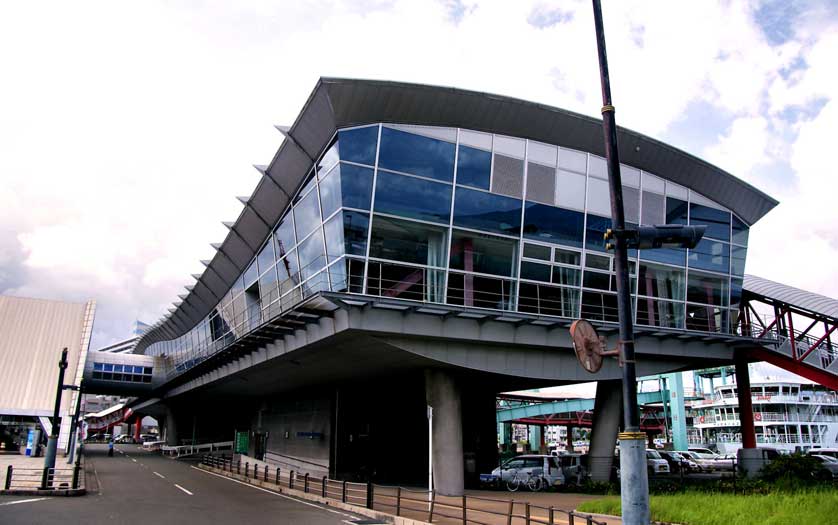 A must visit was the Furusato Kanko Hotel, which housed a beautiful outdoor onsen (natural spa), located on the ocean front, with a large, lovely shrine.

This onsen was unusual in that it was mixed gender and the hotel provided customers with a yukata (robe) that could be worn inside the water to cover the usual (single sex only) nakedness. It was a highly recommended place to visit for a relaxing slice of Japanese culture before it closed in September 2012. 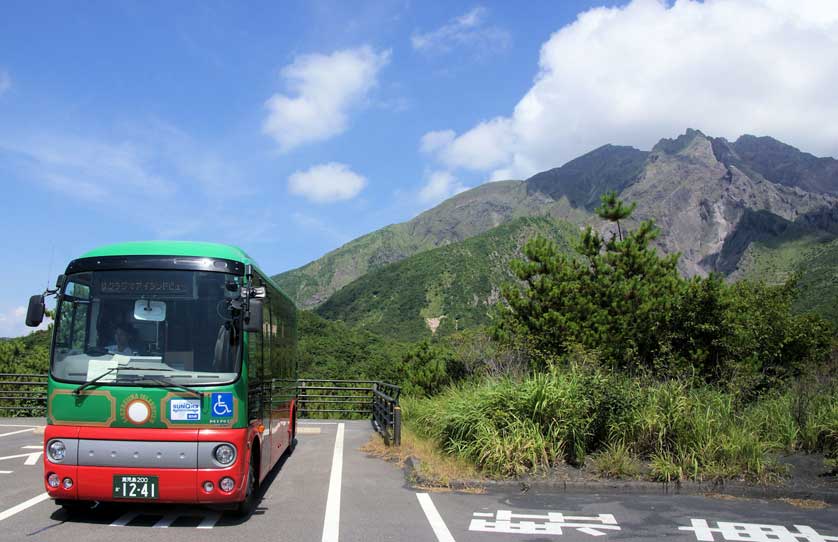 Getting Around Sakurajima - Island View Bus

If you don't have a car, then getting around Sakurajima can be difficult, but fortunately The Island View Bus offers a viable option.

Starting from the ferry terminal the hop-on-hop-off bus does a loop around the area nearest the ferry port stopping at many sites of interest. After the ferry terminal it stops at Hinoshima Megumi kan, Rainbow Sakurajima, Visitor Center, Torishima Lookout, Akamizu Lookout, Yunohirakuchi, Yunohira Lookout, Oshu Elementray School, then back to the port. The bus stops for 5 minutes at the Toshima and Akamizu Lookouts, and for 15 minutes at the Yunohira Lookout.

How to get to Sakurajima 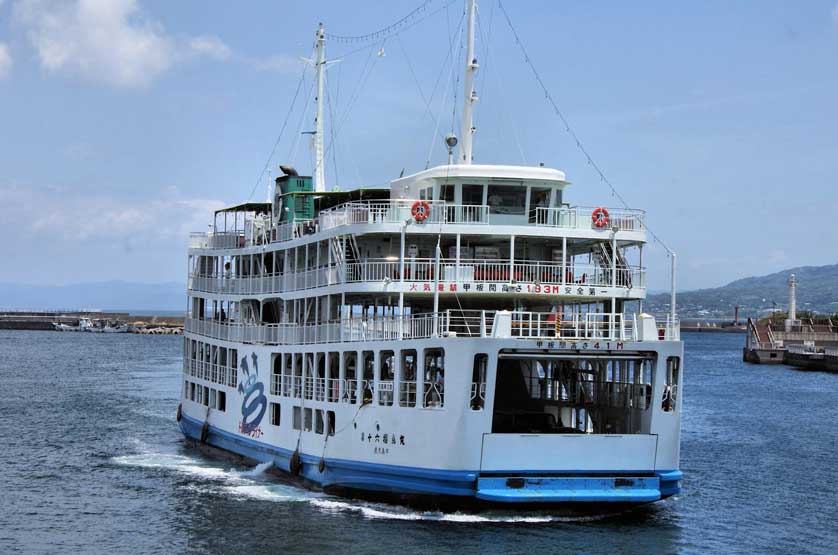 From the Kagoshima ferry terminal in Kagoshima City, Sakurajima is a 15 minute ferry ride across Kagoshima Bay. The ferry port is 10 minutes walk from JR Kagoshima Station. There are Shinkansen bullet trains to Kagoshima Chuo Station from Fukuoka.

The ferries to Sakurajima leave from the ferry terminal next to the Kagoshima City Aquarium.

Regular ferry services began in 1934 in response to requests from Sakurajima residents following the 1914 eruption.

The Sakurajima Ferry now runs 24 hours a day. In the middle of the night the service is only once an hour, but during peak daytime periods they run every 10 minutes. The 3.5 kilometer journey takes a little less than 15 minutes. The route is heavily traveled as it cuts down the time to travel between the two peninsulas of southern Kyushu either side of Kinko Bay.

The 11.05 am departure is the Yorimichi Cruise which cruises around the south of Sakurajima before landing and so offers some different views of Sakurajima as well as of Kagoshima city. 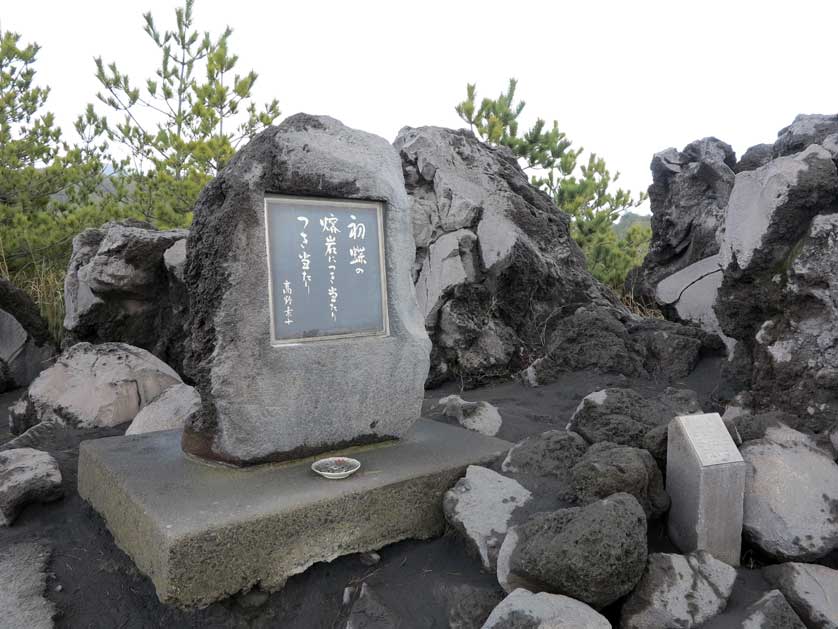