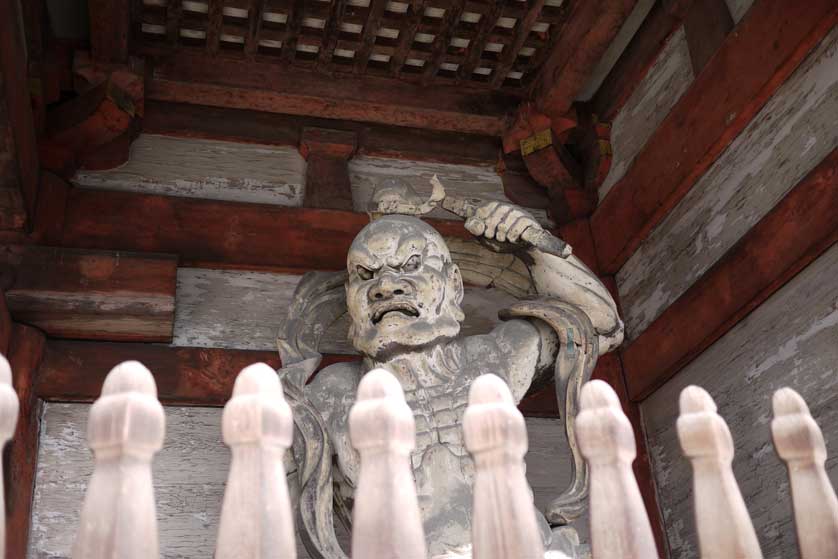 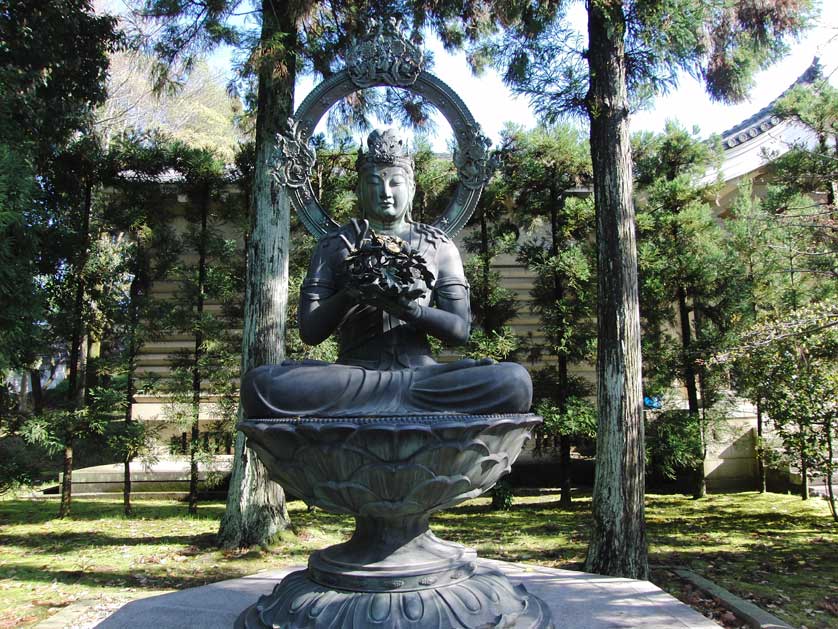 Buddhist statue in the grounds of the temple

For decades prior to that, Ninnaji had served as a summer home for the Imperial Family known as Omuro Palace (Omuro Gosho), who would use it to escape the summer heat of the more centrally located Gosho Palace. Uda served as head priest for thirty years; he was then succeeded by his son.

This practice of having an Emperor's son act as head priest at Ninnaji lasted until the Imperial Family left for Tokyo in 1869 at the beginning of the Meiji Period. The practice whereby a member of the imperial family serves as the head of an important temple is known as monzeki.

Most of the present buildings date back to the 17th century during the Edo Period of Japanese history. Originally there were around 60 sub-temples at Ninnaji but fire and war has reduced their number over time. 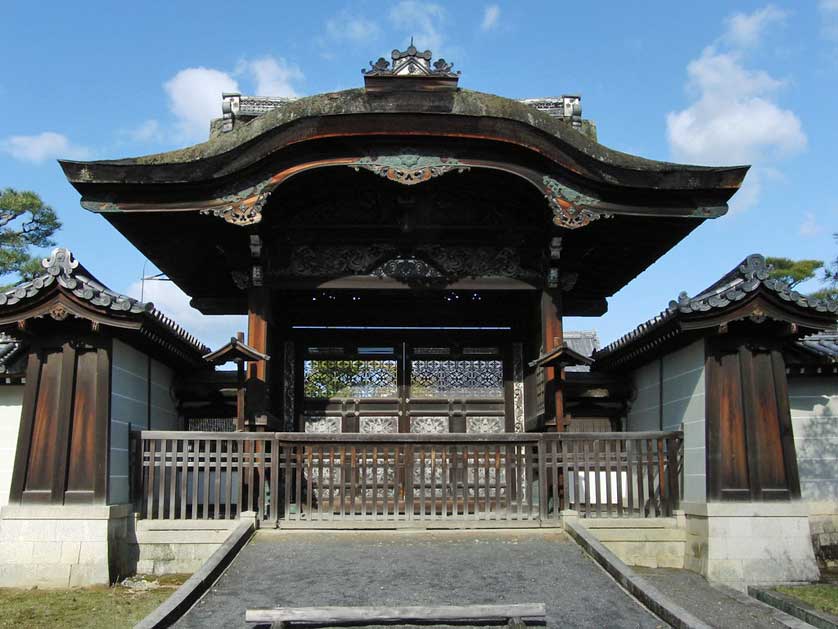 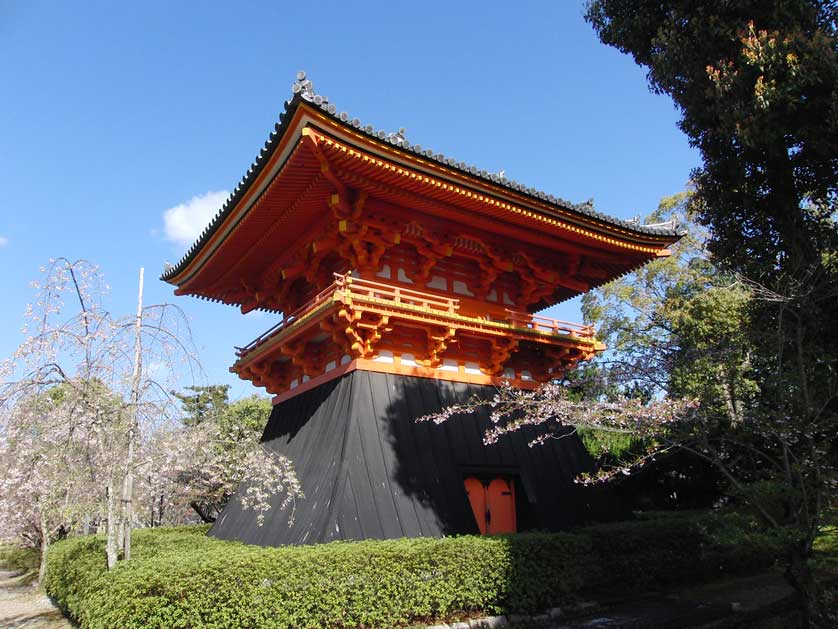 Ninnaji has some impressive gates including the entrance gate San-mon (Mountain Gate) which has a tiled roof and the Chu-mon with two fierce devas (Nio statues) guarding the entrance.

The Main Hall or the Kondo was formerly the Shishin-den (Throne Hall) of the Imperial Palace and contains an golden image of Amitabha (a National Treasure). The Scripture Hall is located to the east and the Mieido to the west.

The Omuro Palace (Goten) is an early twentieth century reconstruction of the original Heian Period buildings and consists of a number of structures connected by roofed corridors and gardens. The buildings includen the Shinden (the main residence), the Shiro Shoin (White Study) and the Kuro Shoin (Black Study) which served as meeting halls. The Kuro Shoin has fusuma sliding doors painted by Insho Domoto. (The Insho Domoto Museum dedicated to the artist is a little to the east).

The 33 meter, 5-storey pagoda was built in 1637. The temple grounds contain ancient, dwarf, late-flowering cherry trees for which Ninnaji is particularly well-known. Ninnaji is the Omuro school head temple of the Shingon sect of Japanese Buddhism and home to the Omuro school of ikebana flower arrangement.

In the hills just behind Ninnaji is the Hachi-ju Haka-sho (88 Temple Pilgrimage), a short hike around mini-temples mirrored on the more famous 88 Temple Pilgrimage around Shikoku. The entire walk can be done in less than an hour (if you are super fit or more leisurely if not) and affords a great view of Kyoto below. 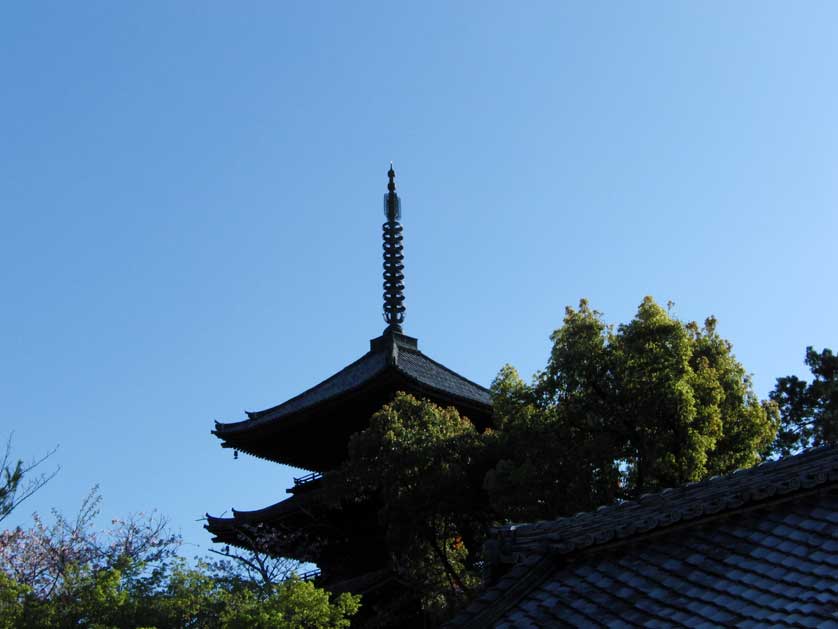 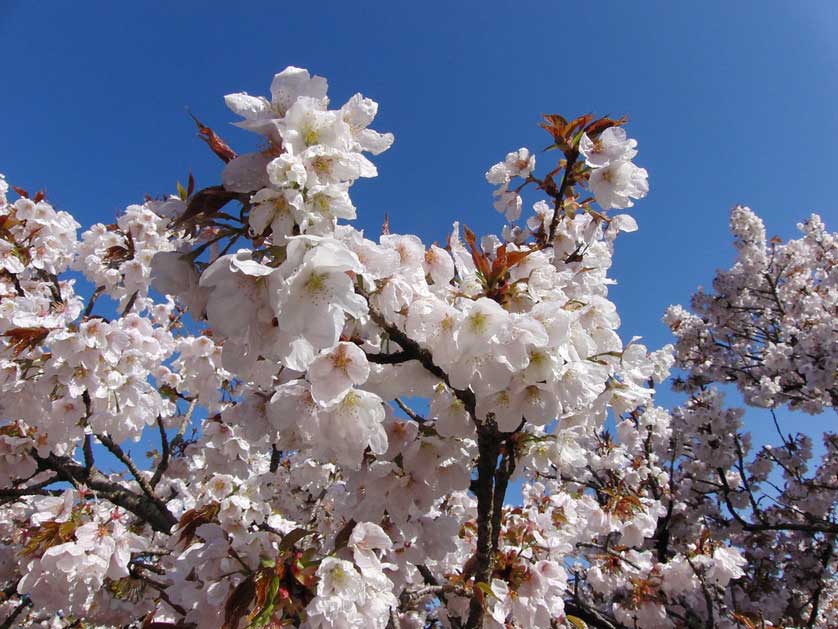 Ninnaji Temple is famous for its cherry blossom in spring

Ninnaji is a short walk from Omuro Station on the Kitano Line of the Keifuku Railway.

Kyoto buses #10 and #59 from Sanjo Keihan Station (40 minutes) stop at the Ninnaji-mae bus stop as does the #26 from Omiya and Saiin stations on the Hankyu Line.

There is also a direct JR bus (30 minutes; 230 yen) to the temple from Kyoto Station on which the JR Rail Pass is valid.

500 yen fee to the Goten (Omuro Palace) that is a World Heritage site; otherwise, Ninnaji is free to enter and stroll, except in cherry blossom season when a 500 yen fee is charged. Admission to the Reihokan is 500 yen. 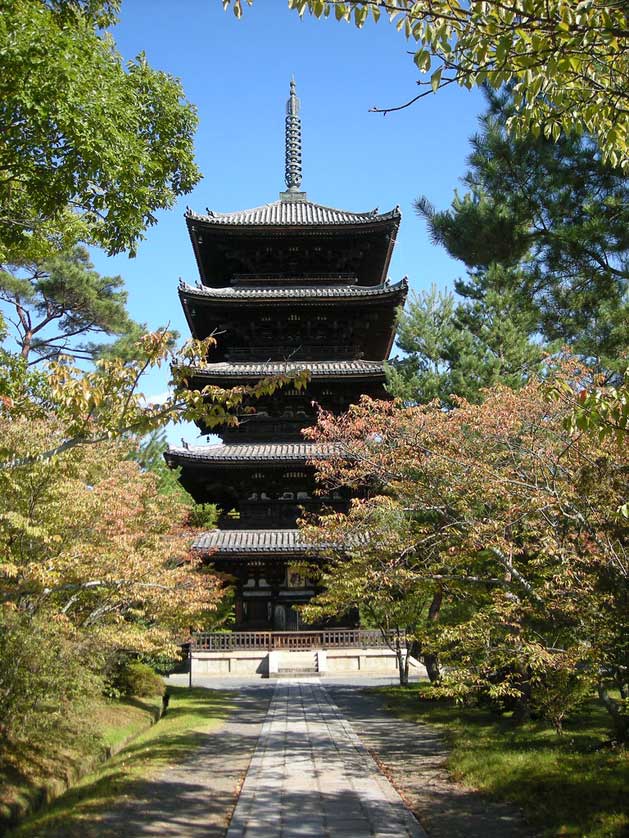 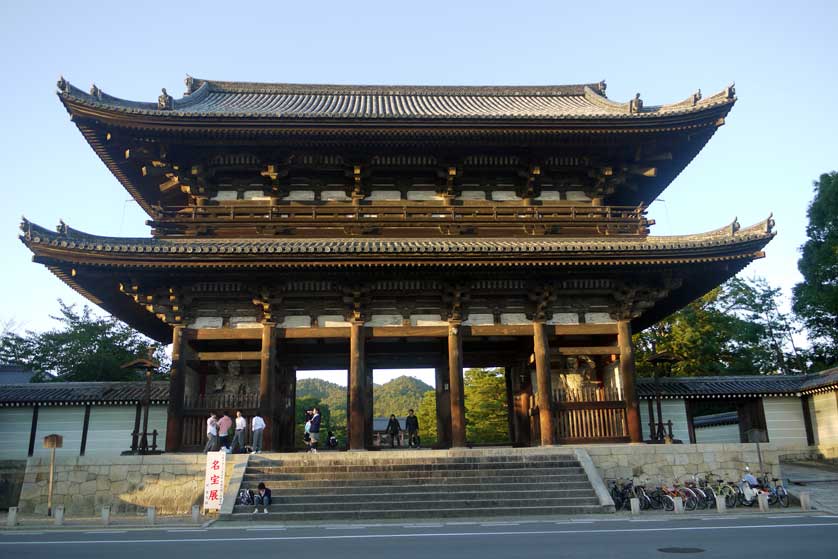 Ninnaji Temple is near to a number of other famous temples and museums in west Kyoto near Ritsumeikan University. Kinkakuji Temple (the Golden Pavilion), Ryoanji Temple and Toji-in Temple are all within easy walking or cycling distance of Ninnaji. The Insho Domoto Museum and Ritsumeikan's Peace Museum are also easily accessed on foot. 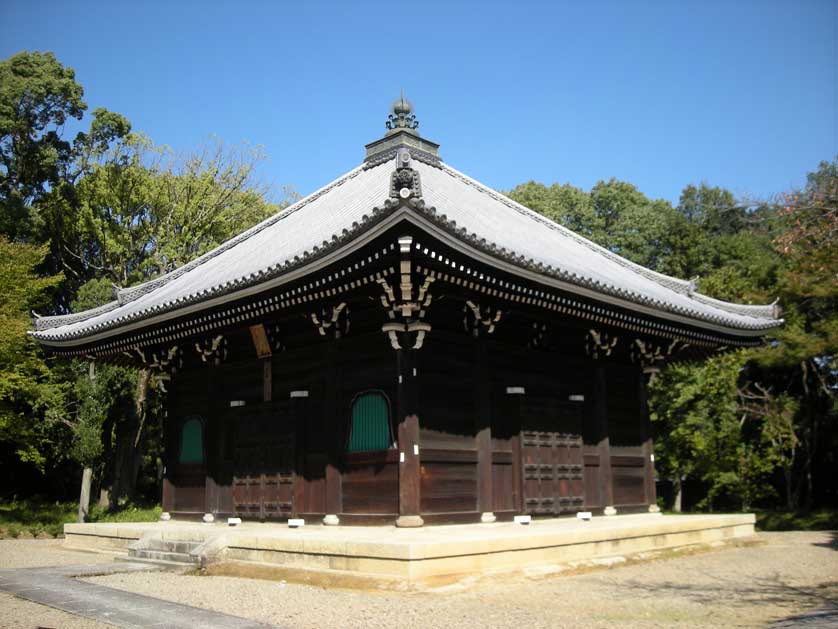 Ninnaji Temple is known for its late-flowering cherry trees