Hosen-in in Ohara to the north east of Kyoto is known for the beauty of its spectacularly tranquil garden and autumn foliage in season.

Hosen-in Temple is a sub-temple of nearby Shorin-in, like neighboring Jikko-in Temple, and is a Tendai sect temple of Japanese Buddhism.

Hosen-in is also one of the so-called "Bloody Temples of Kyoto," with part of its ceiling made up of blood-stained wooden floorboards taken from Fushimi Castle after its last defenders, loyal to warlord Ieyasu Tokugawa, committed ritual suicide when the castle was stormed in 1600. 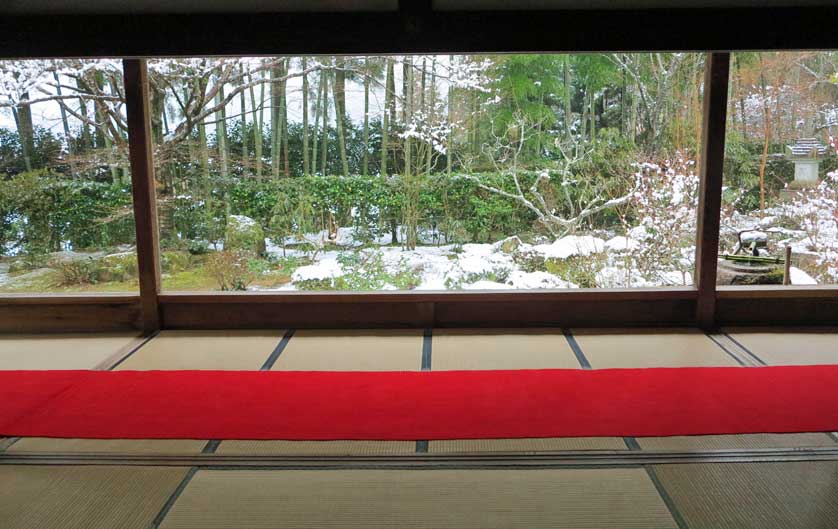 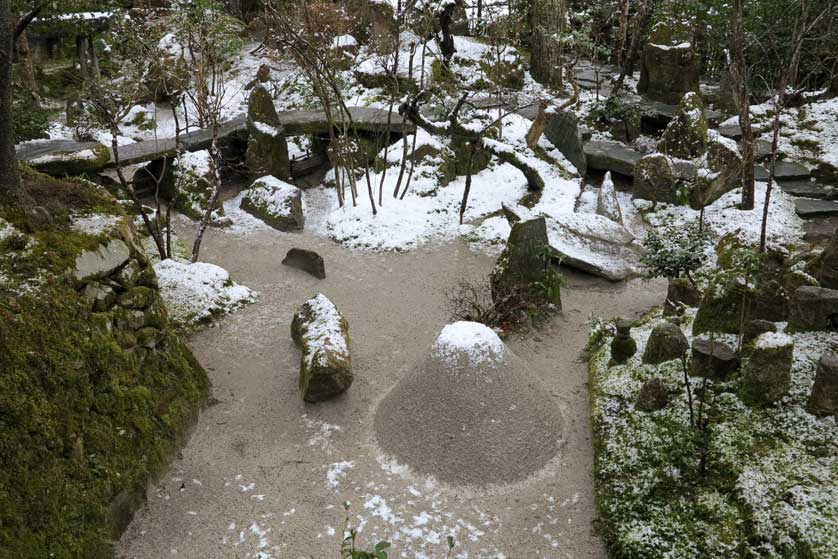 Hosen-in was founded at around the same time as Shorin-in Temple in the early 11th century to serve as accommodation for the monks at the larger temple.

Shorin-in was founded by the monk Jakugen in 1013, a follower of the Tendai monk Ennin (794-864), posthumously known as Jikaku Daishi.

It was Ennin who introduced Buddhist hymns and chanting known as shomyo to Japan, following his visit to China from 838-847. On his return, Ennin became the third abbot of Enryakuji Temple on nearby Mt. Hiei.

With the establishment of Shorin-in, Hosen-in, Jikko-in and later Raigo-in, Ohara became the center of shomyo in Japan and the abbots of these temples have dedicated themselves to its study and development. 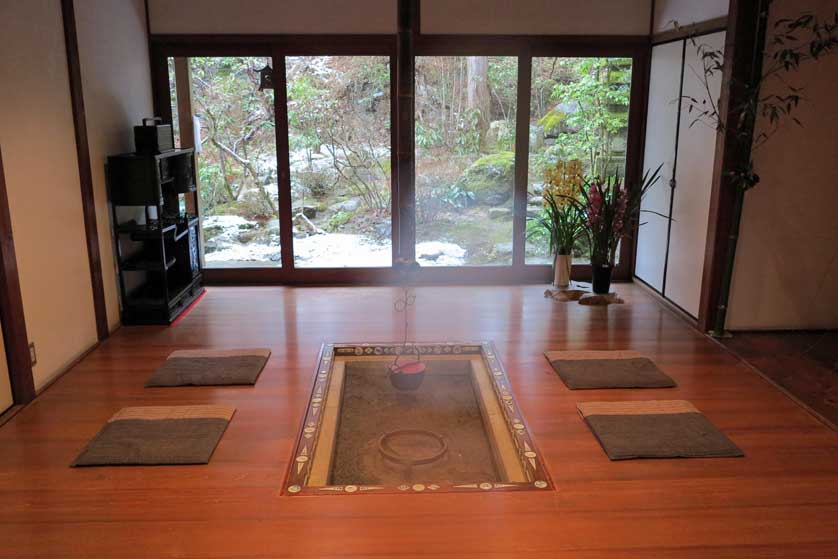 After passing through the entrance gate, visitors can stroll the exquisite garden which is home to an ancient 700-year-old pine tree and has views out over the valley. Steps descend to a lower garden with stone stepping stones and conical mounds of gravel among the trimmed hedges and moss. The garden is beautiful all year round, whether monochrome and covered in snow in winter or in full colorful splendor in the fall.

After viewing the garden, visitors move to a tatami room with a view over an inner garden enclosed by a fence, and with the bloody wooden boards in its ceiling. A bowl of matcha tea and a Japanese sweet are served as you contemplate the beauty of the garden and the transience of life, symbolized by the blood stains above your head. The healing sound of the water from the waterfall is amplified by the surrounding hills as you sip your bitter tea.

Two pieces of bamboo in the wooden engawa surrounding the room are signposted. Place your ear to the bamboo to hear soothing sounds generated by a suikinkutsu (水琴窟) - an upside down ceramic pot filled with stones and fed by water filtering into it from above. The bamboo pipes of the suikinkutsu can be seen next to the small stone basin or tsukubai. The sounds are reminiscent of a contemplative Buddhist chant or shomyo.

Listen to the sound of the suikinkutsu at Hosen-in 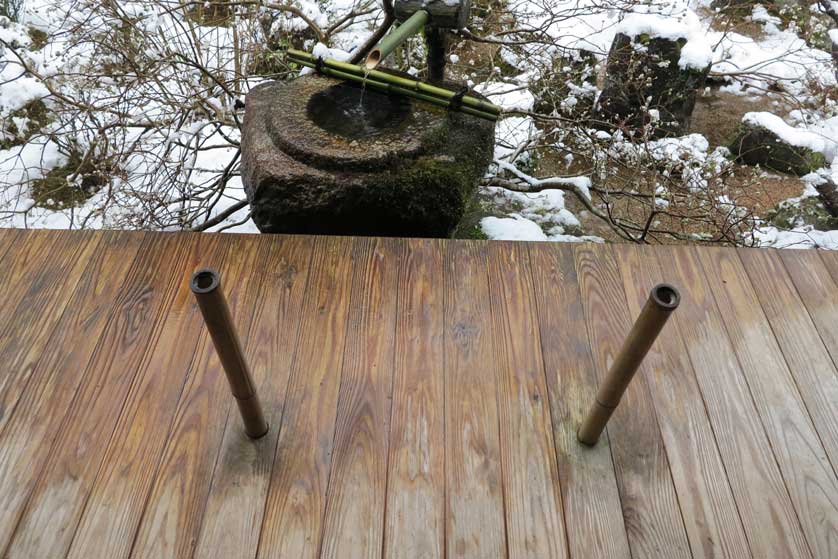 Musical bamboo pipes of a suikinkutsu in the engawa, Hosen-in Temple, Ohara, Kyoto 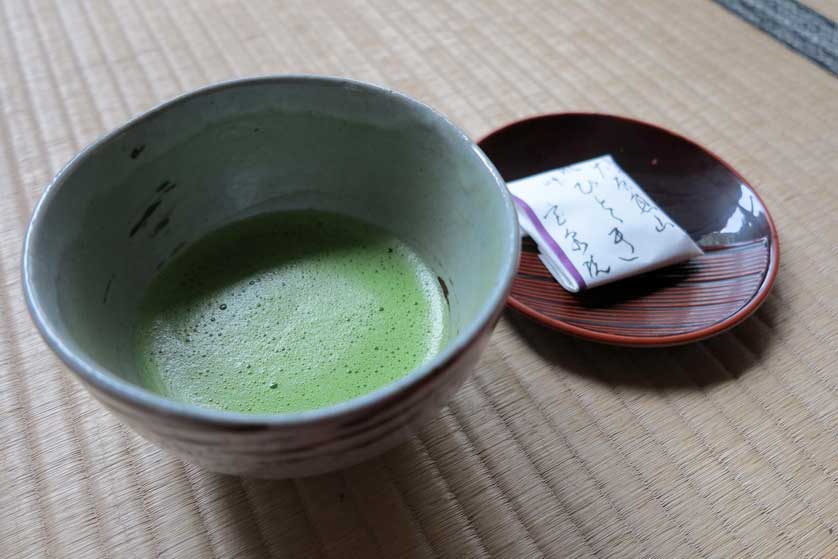 Alternatively, take an Eiden Line train from Demachiyanagi Station to Yase-Hieizanguchi Station and then change to bus #19. You can also get on bus #19 at Kokusaikaikan Station on the Kurasama Line of the Kyoto subway.

Ohara is outside the area covered by the 1-day Kyoto bus pass. 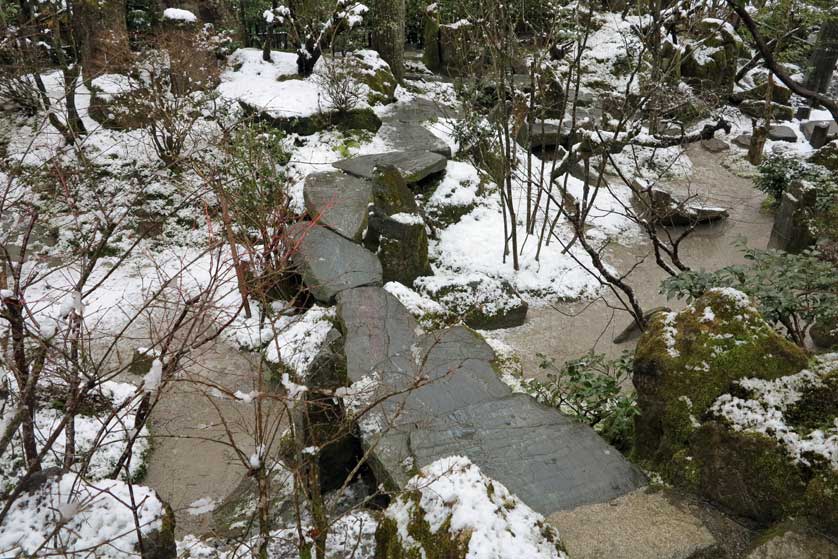 There is much to see in Ohara, which is well worth a half-day or full-day excursion from Kyoto. Other important temples in Ohara include the Jakko-in Nunnery, Raigo-in Temple, Housenin (Hosen-in), one of the so called bloody temples of Kyoto and a sub-temple of Shorin-in Temple. The most famous temple in Ohara is, of course, Sanzen-in.

Also in Ohara are the tombs of two emperors: Go Toba (died 1239) and Juntoku (died 1242) and the so-called Soundless Waterfall or Otonashi-no-taki near Raigo-in.

The road up to Sanzen-in from the bus stop is lined with souvenir shops selling local produce including mochi and yuzu, restaurants, and there are a number of traditional Japanese inns or ryokan to stay in Ohara. Recommended ryokan in Ohara include Gyozanen Onsen Ryokan, Ohara no Sato and Ohara Sanso. 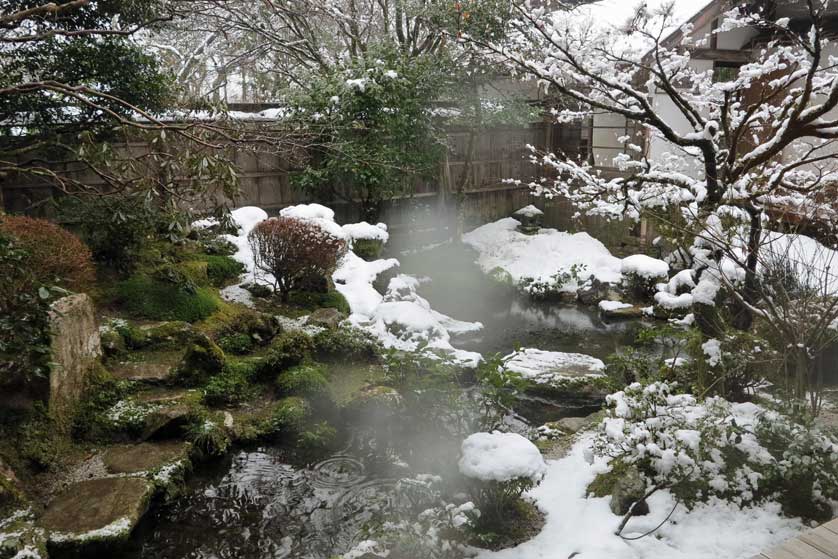 Hosen-in Temple in Ohara, north east Kyoto, is known for its exquisite gardens and its bloody ceilings brought from Fushimi Castle.