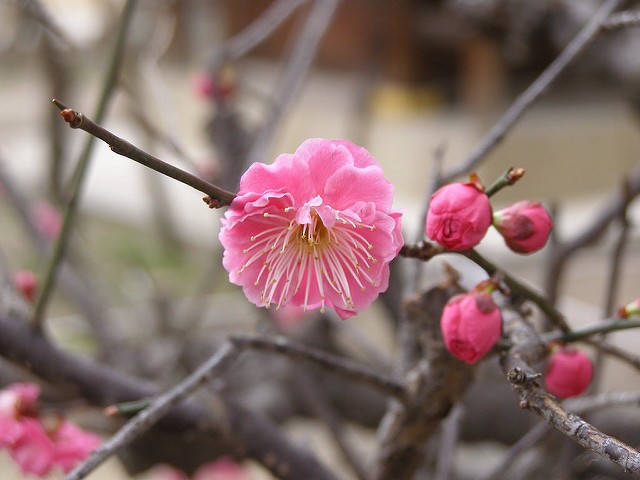 Kitano Tenmangu Shrine is famous for its plum blossoms

Kitano Tenmangu, established in the tenth century, is dedicated to Tenjin (Sugawara no Michizane), the patron saint of students, who flock here from all over the country to pray for success in examinations, especially high school and university entrance exams.

Kitano Tenmangu Shrine is a must-see if you are in Kyoto on the 25th of the month when a huge flea market (known as Tenjin-san to the locals) takes over the grounds of the shrine.

Kitano Tenmangu is also famous for its plum blossoms which can be seen in their full glory usually in February or early March. There are an estimated 2,000 plum trees on the grounds of Kitano Tenmangu and the plum motif can be seen on the lanterns and tiles of the shrine. The plums from the trees are harvested, dried, pickled and sold at the shrine.

The plum blossom is associated with one of Sugawara no Michizane's most famous verses, hence the connection. 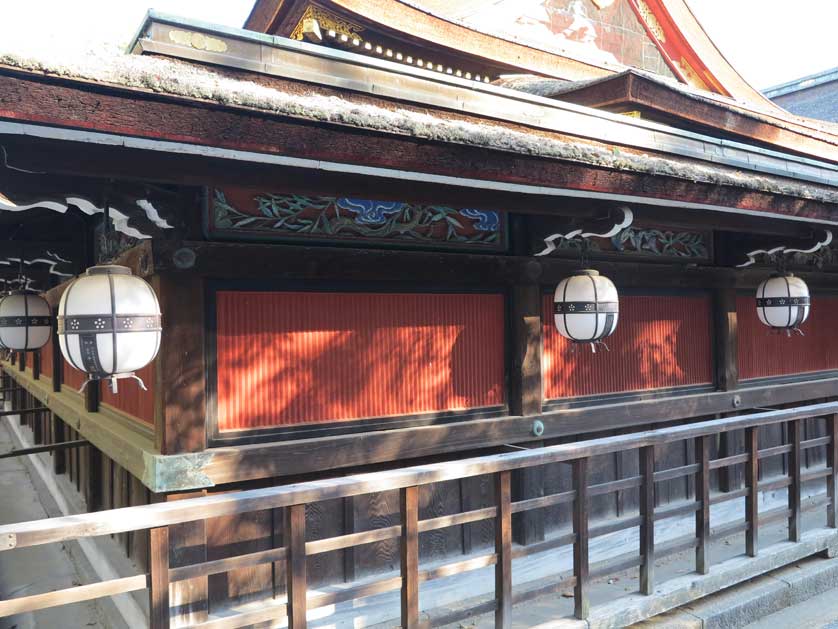 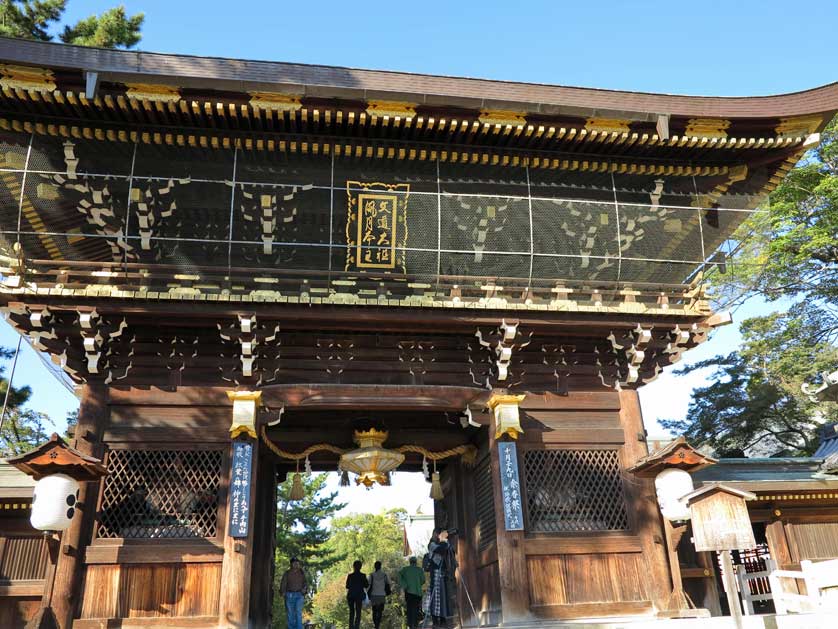 A Plum Blossom Festival is held at the shrine on February 25 and has been for over 900 years to mark the death of Sugawara no Michizane. Geiko and maiko from the nearby Kamishichiken geisha district in Kyoto's Nishijin area conduct an open air tea ceremony on this day.

Kitano Matsuri takes place here on August 4 and Zuiki Matsuri from October 1-4 when decorated floats are paraded through the local streets, the principal portable shrine (mikoshi) is made of zuiki (the stalks of taro), hence the name. 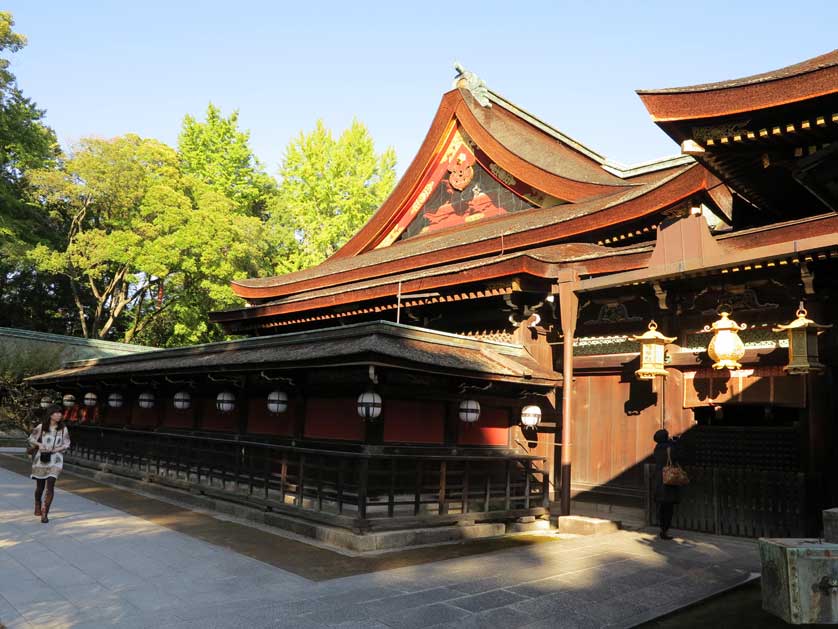 Kitano Tenmangu Shrine was built in 947 in honor of poet and scholar Sugawara no Michizane (845-903), an advisor to the emperors Uda and Daigo, who fell out of favor with the ruling Fujiwara clan and was exiled to Dazaifu in Kyushu, where he died.

Kitano Tenmangu was built to appease the scholar's supposedly angry spirit, following an outbreak of plague in the Kyoto and various misfortunes including thunderstorms and earthquakes that struck the capital and imperial family following Sugawara no Michizane's death.

Sugawara became deified as Tenjin, a deity of scholarship. There are now thousands of shrines, large and small, dedicated to Tenjin throughout the country, somewhere in the 10-20,000 range. Previously the Tenjin Shrine was dedicated to the god of thunder and the angry spirit of Sugawara no Michizane was thought to be manifested in the thunderstorms that hit Kyoto.

Students undergoing the annual "examination hell" visit the shrine throughout the year but especially in winter to pray for success and buy one of the shrines lucky charms, ema (votive plaques) or omamori. 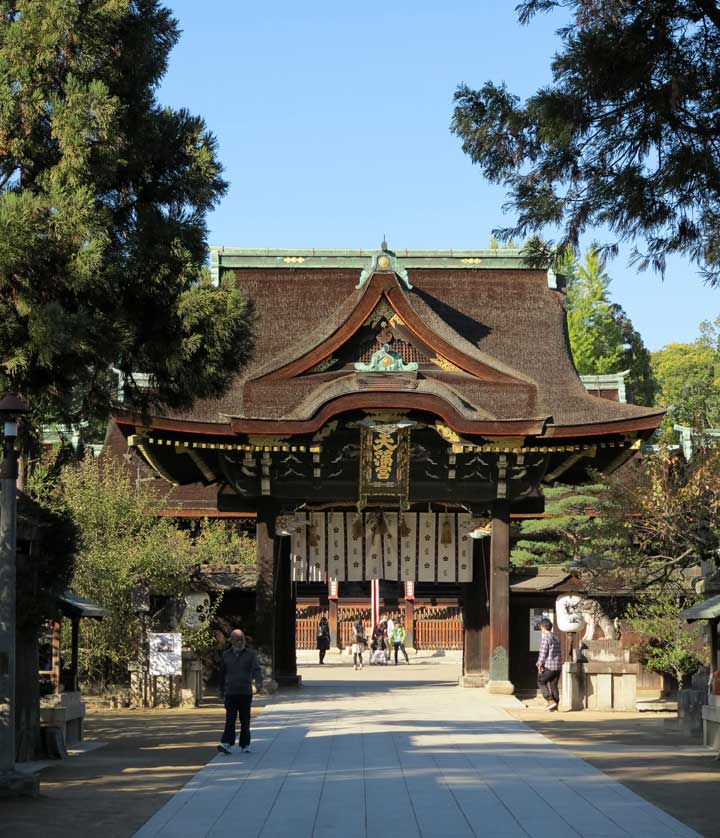 Visitors enter through a tall concrete torii gate at the main entrance on Imadegawa Dori guarded by two koma-inu (Lion dogs) and proceed up the path to the main shrine buildings to the north.

The present structures at Kitano Tenmangu were built on the orders of Toyotomi Hideyori (Hideyoshi's son and heir) and date from 1607. They include three ornate gates, the Main Hall (Honden) and an oratory. The cypress shingle roofs are a characteristic feature.

The approach to the main shrine buildings has a number of stone oxen which relate back to the "Day of the Ox" in the Chinese calendar when the shrine was first dedicated to the god of thunder and also to an ox which supposedly either died when pulling the coffin of Sugawara or refused to take another step, thus leading to the great man's burial on the spot in Dazaifu.

People rub the statues, known as nade ushi ("stroking cows") for good luck and relief from aches and pains. First they rub the the part of their body where they have pain and then they rub the cow in the same spot to 'transfer' the disease or pain.

The treasures of Kitano Tenmangu include nine illustrated scrolls of the shrine painted by Yukumitsu Tosa in the 14th century and three scrolls by his descendant Mitsuoki Tosa dating from the early Edo Period. The treasure house is open on the 25th of each month to coincide with the flea market.

On November 26 each year the Ochatsubo Hokensai (Tea Festival) is held at the shrine to remember Toyotomi Hideyoshi's famous tea party at Kitano shrine, when he invited the entire world to attend.

The connection of Toyotomi Hideyoshi with Kitano Tenmangu also extends to the Odoi (御土居), an earthwork and system of moats built by the warlord around Kyoto in 1591.

To the west of the Main Hall, the Odoi follows the Kamiya River and during the spring plum blossom and autumn leaves viewing seasons, a special entrance charge enables visitors to stroll this lovely walk which includes a red arched bridge and stone monument engraved with the three kanji characters for Odoi. 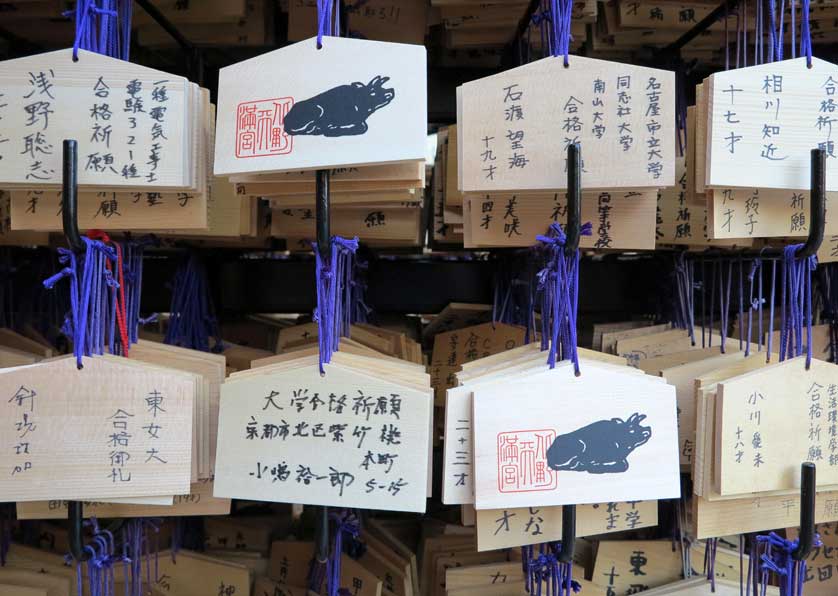 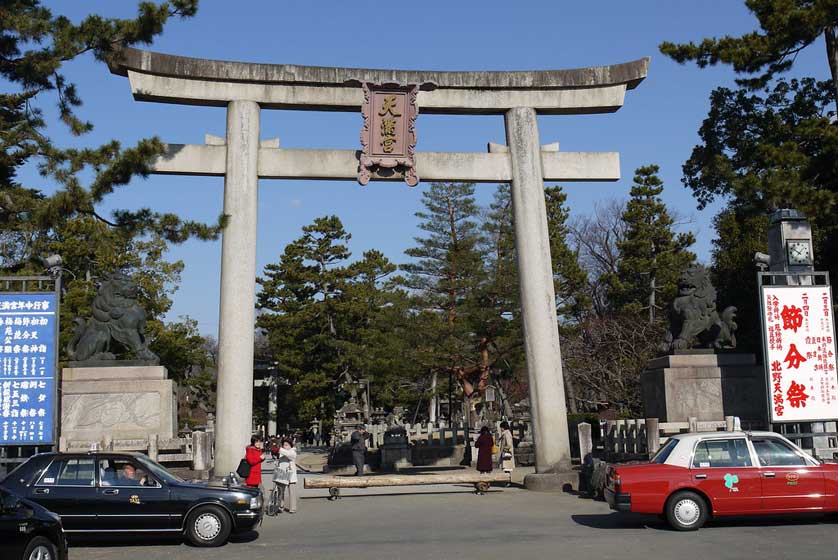 Large torii gate at the entrance to Kitano Tenmangu Shrine

Kitano Tenmangu is on Imadegawa, west of Senbon and Horikawa. Bus #50 from Kyoto Station: #59 from central Kyoto; #201 from Keihan Demachiyanagi.

There are a number of popular restaurants and shops outside the main entrance on Imadegawa and along the road that runs on the eastern edge of the shrine grounds.

Bicycle is an easy way to visit Kitano Tenmangu and the nearby Hirano and Waratenjin shrines. Kinkakuji is a few minutes' ride north of Waratenjin. 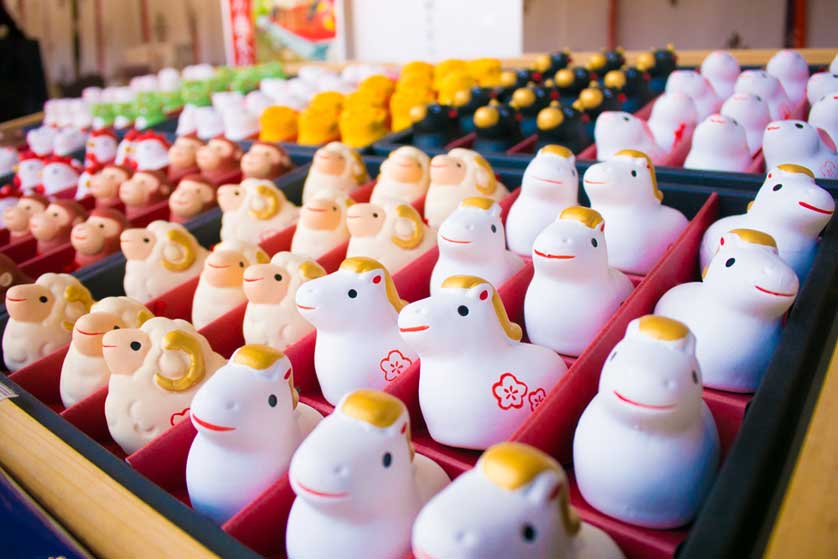