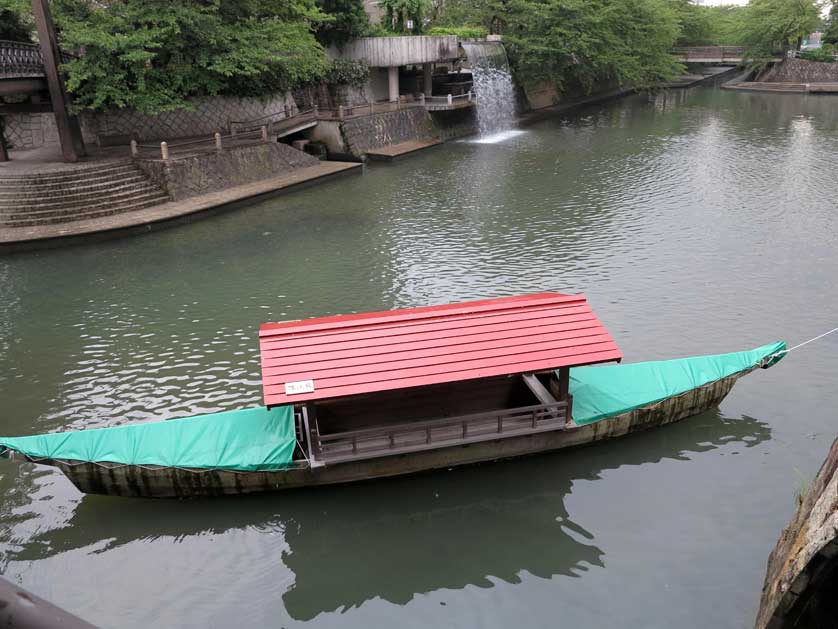 Ogaki is known as the "City of Water" due to the Suimon River and its many castle moats that ring the city.

Ogaki likes to call itself the "City of Water" due to the presence of the Suimon River and the numerous moats that were built to surround Ogaki Castle.

The Ibi River, to the east of Ogaki, is a major river and tributary of the Kiso River that flows down to the sea through Kuwana to the south.

Ogaki has a number of natural springs dotted throughout the city where refreshingly cool water gushes to the surface and local residents come to collect it by the bottle.

Ogaki is also close to the historic battlefield of Sekigahara and the interesting Site of Reversible Destiny in Yoro Park.

Ogaki is perhaps best known nowadays for its connections with wandering Edo-period haiku master, Matsuo Basho (松尾芭蕉). Ogaki was the final destination in 1689 of Basho's epic journey to the northeast of Japan related in Oku no Hosomichi. A Haiku Journey: Basho's Narrow Road to a Far Province (Illustrated Japanese Classics).

References to the poet are everywhere in Ogaki: in the names of restaurants and shops, as well as Basho statues, museums and the town's Basho Festival in November. 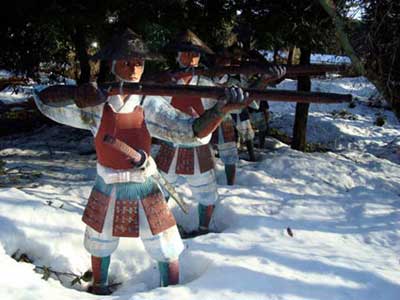 A reconstruction in concrete of the Battle of Sekigahara near Ogaki 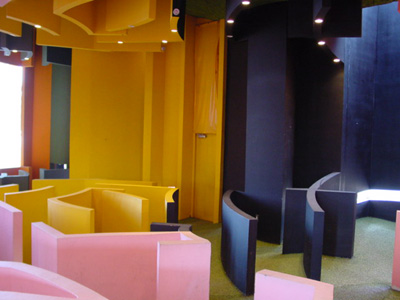 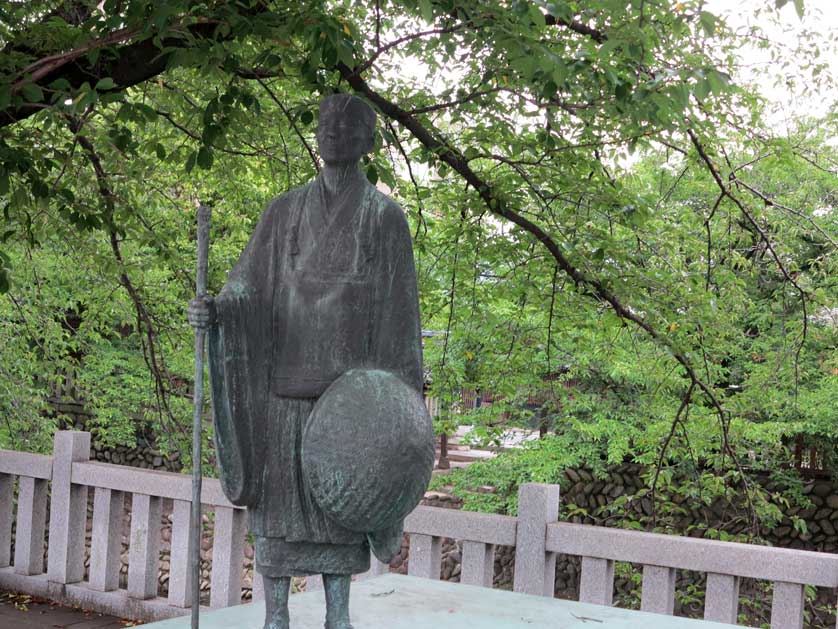 On completion of his trek around the north of Japan, Basho took a river boat from Ogaki south to Kuwana and then on to his birthplace - the ninja stronghold of Iga.

Back in the Edo Period (1603-1867), Ogaki was a strategic town on the east-west Nakasendo route between Kyoto and Edo (Tokyo) and the Suimon River, which runs right through the town, was navigable and joined with the larger Ibi River, making Ogaki a major river port at the time for the trans-shipment of goods. 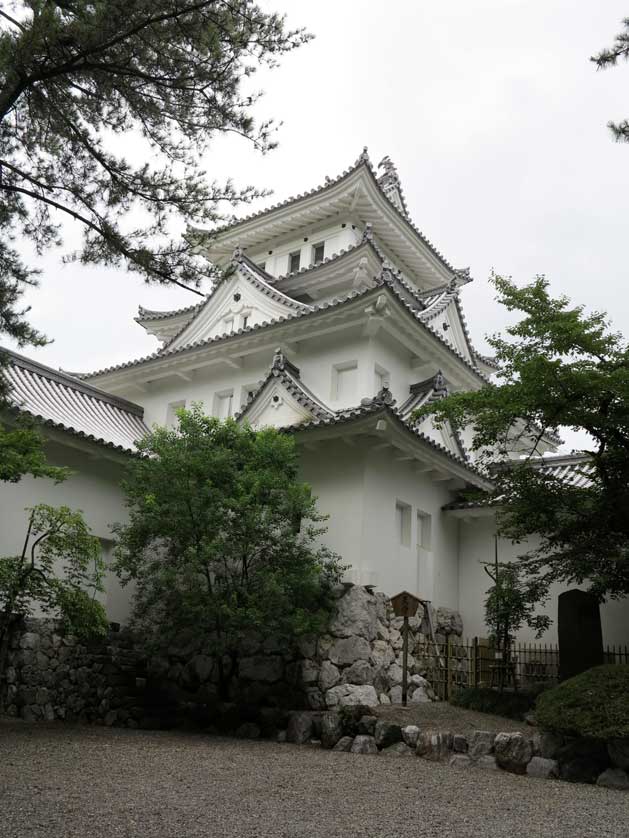 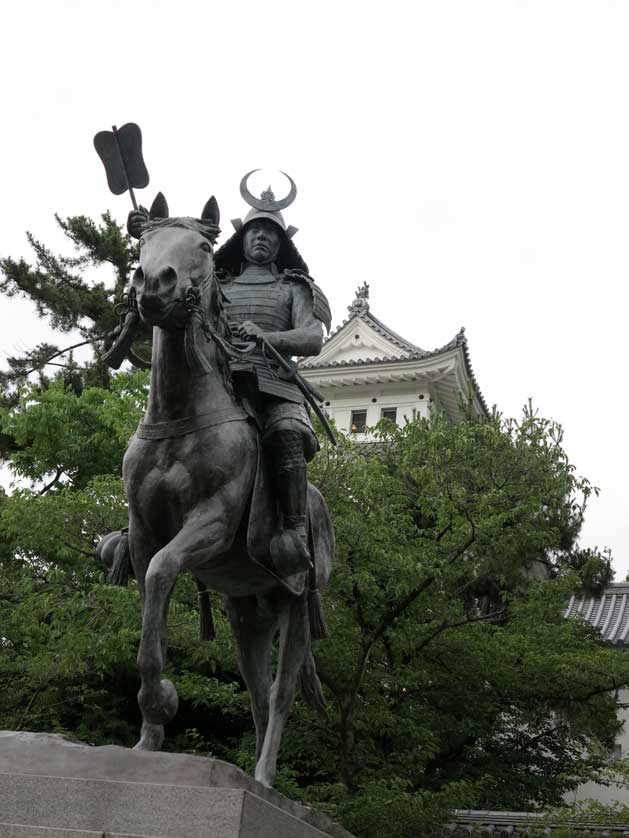 Ogaki Castle, which dates from 1500, played an important role in the events leading up to the decisive Battle of Sekigahara in 1600.

In 1600 Ieyasu Tokugawa comprehensively defeated his rivals the Toyotomi clan at nearby Sekigahara.

The forces loyal to the Toyotomis were lead by Ishida Mitsunari who had his main base in Ogaki.

Apart from some stone walls, there is not much left of the original castle, which was besieged and taken by Tokugawa after the Battle of Sekigahara and destroyed in World War II.

The small keep in Ogaki Park is a modern reconstruction, built in 1959 and then completely redesigned in 2002 to be more faithful to the pre-war original. The castle keep now houses an interesting history museum, dedicated to the events at Sekigahara. Other exhibits include Edo Period weapons, suits of armor, documents and original roof tiles.

A short walk from Ogaki Castle is the fascinating Ogaki City Moriya Tadashi Art Museum which is dedicated to the art of locally-born Moriya Tadashi. Moriya Tadashi, born in Ogaki in 1912, is a highly regarded Japanese artist who is known for his sketches of China made during his active service in World War II as well as his fan paintings of the poems of Basho.

The Ogaki Museum of Local History is dedicated to the history of the Toda lords who were the feudal lords of Ogaki Castle during the Edo Period. Exhibits include large byobu screens, calligraphy, firearms, models, and dioramas. Visitors can enjoy the the lovely Japanese garden in the grounds. 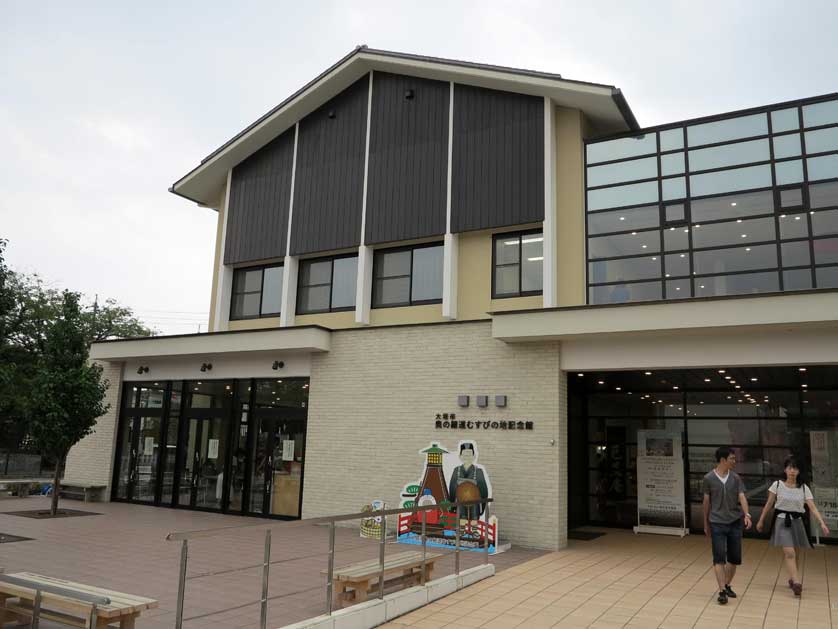 The new Oku no Hosomichi Musubi no Chi Memorial Hall opened in 2012 is directly opposite the statue of Basho on the canal. It's 300 yen to enter the facility which has video screens showing highlights of Ogaki's festivals as well as exhibits dedicated to Basho's last journey to the north of Japan. There is a reconstructed Edo Period villa with a thatched roof on the grounds.

Walking south from the castle brings you to a small Basho Museum near the Shiki no hiroba plaza - a pleasant canalized area on the Suimon River.

A short walk south of here is a Tourist Information Center (Tel: 0584 77 1535) - there's another at Ogaki Station, Basho's statue and a reconstructed wooden lighthouse.

Ogaki has a pleasant, laid-back charm and is well-worth a visit if only to sample some of its famed bean paste, sake or persimmon sweets. 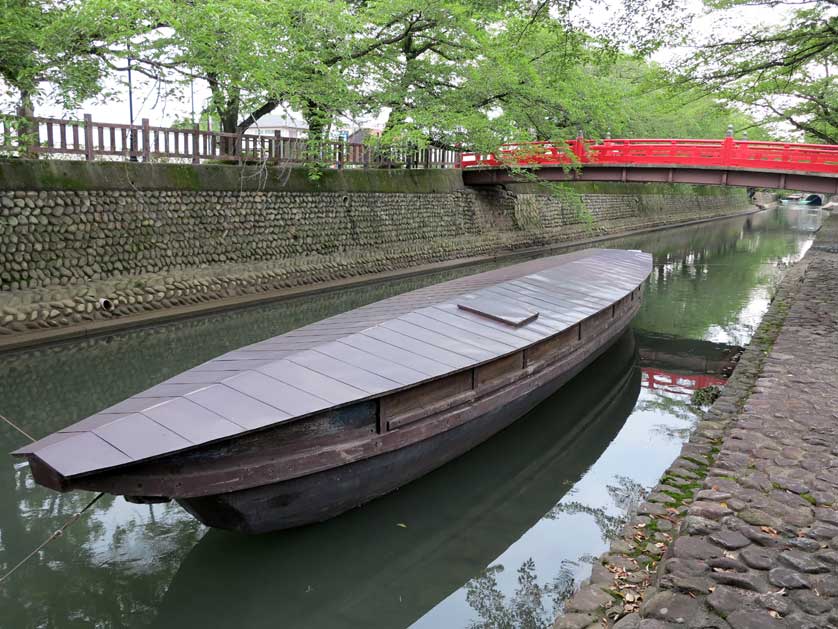 Chubu International Airport is the nearest airport to Ogaki. There are direct connecting trains to Gifu on the Meitetsu Centrair service (55 minutes), then change to JR for the short hop to Ogaki. 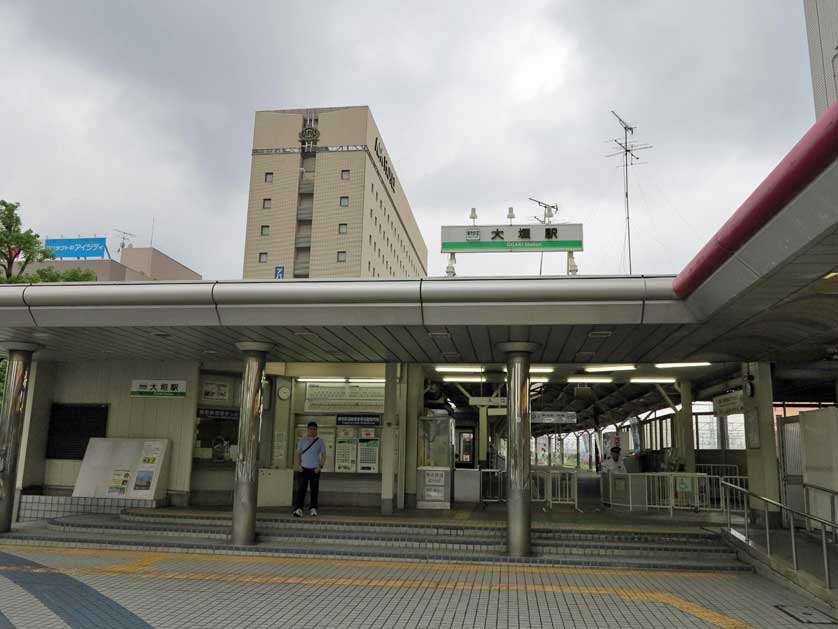 Ogaki Station also connects to Kuwana and Yoro Park by the Kintetsu Yoro branch line. If you are driving from Nagoya on the Meishin highway exit at Ogaki Interchange.

Ogaki is easy enough to get around on foot or bicycle. A community bus does the rounds of the city. 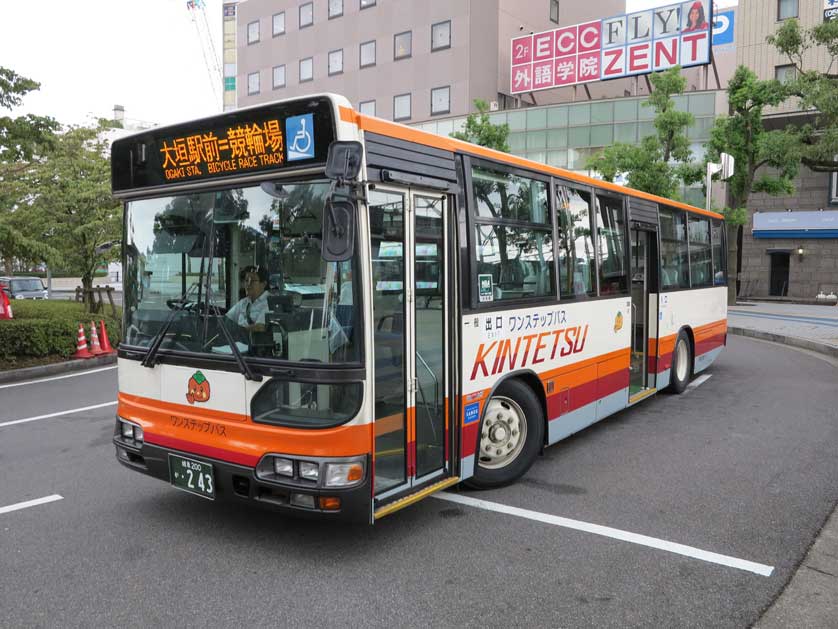 Local Kintetsu bus outside the station in Ogaki 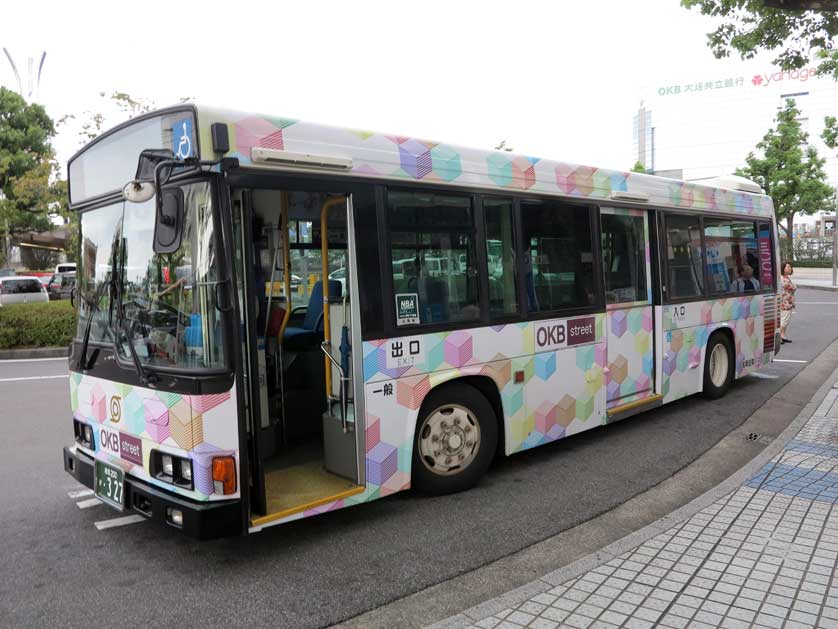 Community bus outside the station in Ogaki

Ogaki: read a guide to Ogaki in Gifu Prefecture, an historic town associated with the haiku poet, Basho.