Izu Guide: read a guide to the Izu Peninsula. Izu is just several hours south of Tokyo and Yokohama by train or bus. Izu has great beaches and mountains. 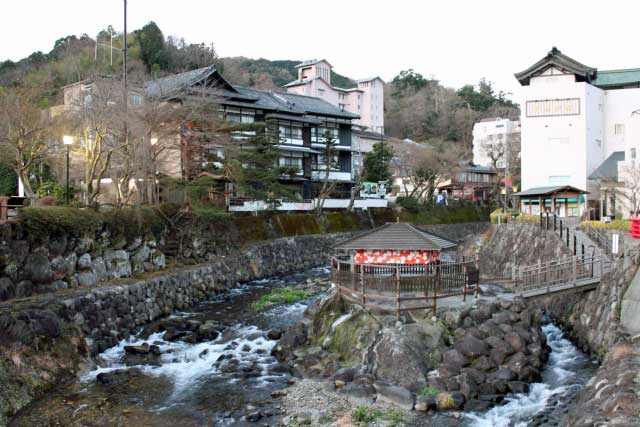 The Izu Peninsula extends into the Pacific Ocean west of Tokyo. Shimoda port near its southernmost point became famous with the arrival of Commodore Perry's Black Ships and the end of Japan's centuries of isolation in the mid-1800's.

Nowadays, the port city of Atami at the topmost edge of the peninsula on the Tokyo side is renowned for its hot springs. But when I set out for the peninsula, I was more interested in its literary claim to fame, which took me to its less-touristy middle.

Though fiction, it is based on Kawabata's own journey there as a nineteen-year-old, and traces a route from Shuzenji near the top of the peninsula down to Shimoda at the bottom.

Like Atami, the rest of Izu boasts an abundance of natural hot springs, and in the past centuries many towns have relied on this reputation to bring in travellers. With the travellers came travelling entertainers, of which the eponymous dancing girl was one. She captured the heart of the young student, her literary incarnation seizing the imagination of subsequent generations of visitors to inland Izu, many of whom choose to retrace the steps of the beloved characters along a well-worn hiking trail.

This was my plan too as I got off the shinkansen at Mishima station, about halfway between Nagoya and Tokyo, and changed onto the private Izu-Hakone Tetsudo line. It was a fine autumn day, and I felt the mood shift from the somewhat clinical efficiency of the bullet train to the relaxed, slightly shabby saunter of the local train. The leisurely half-hour ride took us through rolling pastoral hills and stubbly brown paddy fields resting up after a busy summer. 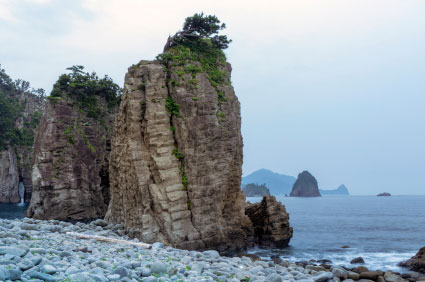 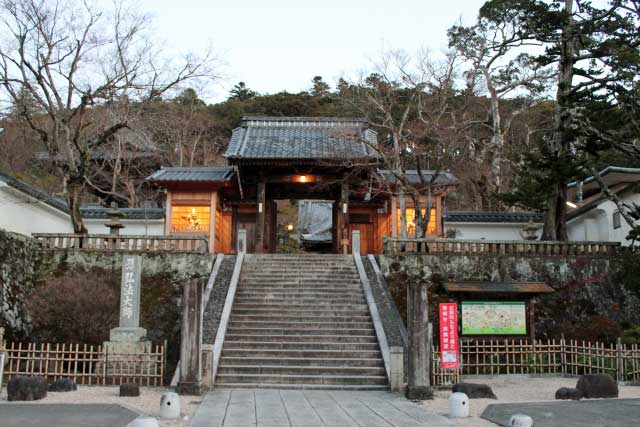 Before I knew it, I was in Shuzenji, named after its beautiful temple. The modernized town centre itself was nondescript, but my mood was expansive as I walked across the bridge and towards the verdant hills.

My modest inn, Minshuku Fukui, was another half-hour's walk from the station. I could have caught a bus, but I was determined to walk as much of the route as possible. I passed a vending machine on the way selling fresh wasabi - not something you see at the side of the average country road.

The minshuku was deathly still when I arrived in the gloomy mid-afternoon, but a quick ring of the buzzer brought out the resident kami-san, the elderly lady of the house, who led me to a tatami room on the ground floor, pointed out the way to the private bath, and told me when dinner would be served.

I decided to take a quick dip in the outside men's bath, and as I slipped in, the first drops of cold rain rose up to meet me, plopping on the surface of the water. After the shower had subsided, I headed out for a look at the temple and its environs.

The Shingon Buddhist priest Kobo Daishi is said to have struck the riverbed adjacent to the temple with an iron staff, causing a hot spring to spurt forth and cure a local man's affliction. This tokko no yu still exists, but can no longer be bathed in. However, I plunged my hand into the scalding water, hoping to assuage the pain in my wrist after having slipped on the slick steps of Shuzenji Temple. Miraculously, the ache was gone within minutes, and did not return the next day. Kukai (as he is also known) had made another convert.

Returning to the steps leading up to the inn, I almost ran into a large rusty-brown toad squatting at the bottom, brought out by the rain. Dinner was a simple but generous serving of various local dishes, washed down with hot green tea. I made the acquaintance of an old woman from Ito, another hot-spring town near Atami, who was making a valedictory tour of the area, and a young nurse from Kobe, who was going to do temporary work at a nearby ryokan the following day. 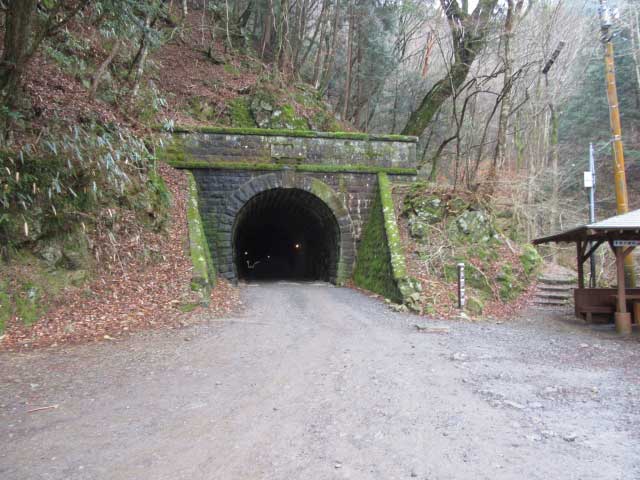 Old Amagi Tunnel, Japan's longest stone tunnel at 445.5 meters in length. It dates from 1905 and is mentioned in Kawabata's writings

The next morning, I awoke to heavy rain, and my heart sank. The walk south through the Amagi tunnel to Kawazu town would take several hours, and would not be at all pleasant in such conditions.

At the old woman's prompting we decided to make part of the journey together. She had already arranged for a taxi to take her south, and was quite happy to drop both the nurse and myself off on the way.

I was reluctant to give up my plan of following in Kawabata's footsteps, but I knew I would be miserable at the end of the day if I were soaking wet and shivering, so I acceded to the formidable force of nature that this woman was. When we stopped at the famous Amagi tunnel and watched bedraggled school children shuffle through like so many rats heading into a sewer, I realised that this could have been my fate, but resolved to come back on a sunny day and do it properly.

Not far from the tunnel was the Joren Falls, which preceded a series of falls further south, collectively called the Nanadaru (Seven Waterfalls), along the trail leading to Kawazu. I had intended to be dropped off there and walk the rest of the way to Kawazu, but the rain was showing no signs of easing, and nor did the old woman relent in her insistence on taking me all the way to my inn in Kawazu.

All I had to give her in return for her generosity was a New Zealand muesli bar. I left her with that as we parted at the stone steps leading down to the Kawaza river, and I crossed the bridge leading to Fukudaya Inn, perhaps the epicenter of Dancing Girl lore, since much of the story's action takes place there.

This stately ryokan dates back to the Meiji era, and was already well established when Kawabata stayed there in the early years of the 20th century. His room, long since become a shrine to the author, though you can still stay there.

It sits on the first floor and looks out directly onto the river. The room and the garden below figure in the story, as does one of the beautiful old baths from which Kawabata's protagonist catches a glimpse of the dancing girl bathing on the other side of the river. 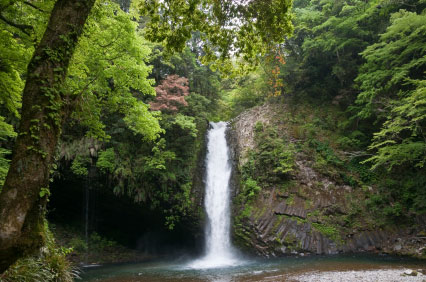 The rain continued fiercely until night had fallen, and the little river became a roaring torrent. I felt a little lonely having a sumptuous dinner served to me alone in Kawabata's room that night, but a visit to the little museum below cheered me up. It is filled with photos and paraphernalia from the several films made of the story, all of which featured the inn in some way. I sat and watched a few of them before bed, then let the rushing water outside lull me to sleep.

The next day dawned warm and sunny, and I was at last ready to do some walking. Another flock of uniformed schoolchildren descended on the inn as I was about to leave, and I saw them peering out of the window of the room where I had been sleeping just hours before. I set a good pace as I followed the river east.

I had considered going on to Shimoda further south along the coast, but time was running out and I decided to visit it properly another day and stay at yet another inn featured in the story, and then maybe make a ferry trip across to Oshima, the island home of the dancing girl. Instead, after a couple of hours' walk to the coast I clambered about on huge boulders watching surfers catch the waves. An hour's train ride took me up to Atami to catch the bullet train back to Kyoto.

My Izu journey had not turned out quite how I had imagined it, but it was all the more rich an experience for it. Izu Peninsula sparkles with hidden gems of literary, interpersonal and natural wealth, and is well worth a visit, whether you wish to seek out the dancing girl or not.

Oshima Island, off the eastern coast of Izu Peninsula, is the birthplace of the dancing girl in Kawabata's The Dancing Girl of Izu. Ferries run to the island from Atami. The main towns on Oshima are Okada in the north and Motomachi, which are connected by bus. Mt. Mihara, at 758m, in the center of Oshima is a truncated volcano, which still bellows steam, and had a major eruption in 1986. To find out more about the volcano head for the Izu Oshima Museum of Volcanoes.

Oshima has good beaches on its northern and western coasts and is known for its profusion of camellia (tsubaki) flowers in early spring.

Hot springs (onsen) on Oshima include Miharayama Onsen and Motomachi Hama no Yu. 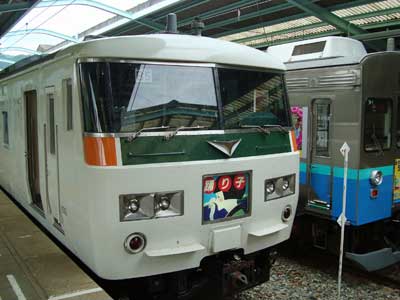 Odoriko train to Shimoda and the Izu Peninsula at Shimoda Station 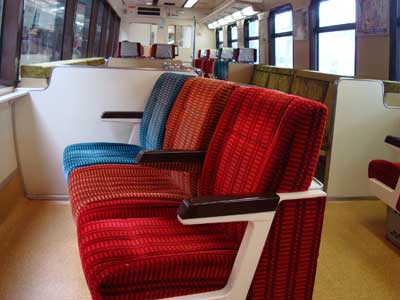 Inside the Odoriko, where the seats can be moved to enjoy the view of the coast

From Shinjuku Station, the cheapest way to go is on the Odakyu line (under the big Odakyu Department Store on the west side of Shinjuku Station). For 850 yen take the Odawara line limited express (kaisoku kyuuko) bound for Fujisawa, then change trains after about 30 minutes at Sagami-ohno to the express (kyuuko) bound for Hakone Yumoto and alight at Hakone -Yumoto. It takes about 1 hour 50 minutes in total. 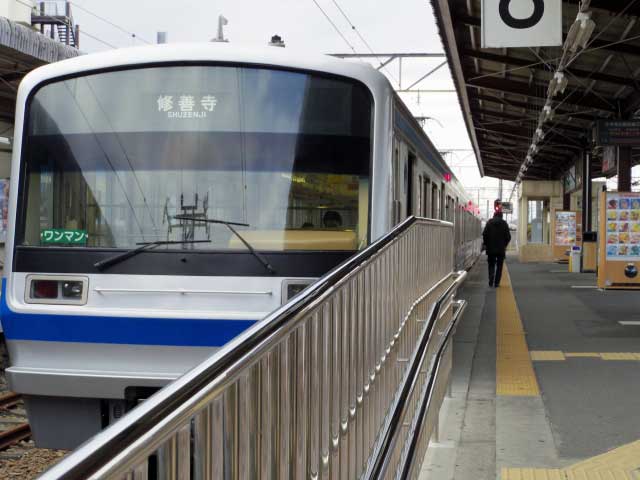 Odakyu FreepassOdakyu offers what is called the 'Hakone Freepass' (actually 5,500 yen for adults - 4,700 on weekdays) that, as well as covering your return trip to Hakone, gives you unlimited access for three days to seven types of transportation in Hakone and discounts at a huge number of shops and facilities. More than pays for itself if you are spending more than a day moving around Hakone.

Between Ito and Shimoda, the Odoriko limited express JR train runs on Izukyu Railway Company tracks. As a result, Japan Rail Pass holders will have to pay a supplemental fee for this portion of the journey of 2070 yen one-way.

Odakyu also runs a bus service from Shinjuku Station. It takes just under two hours and a half to Hakone-machi and costs around 2000 yen one-way. 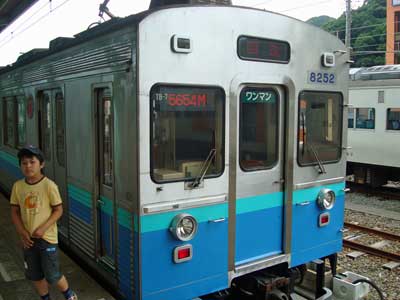 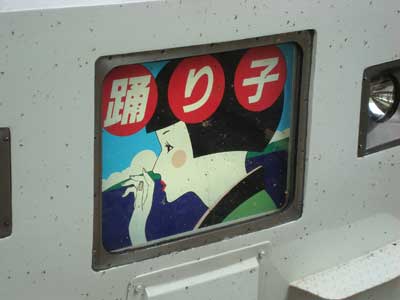