The Boso Peninsula in Chiba Prefecture separates Tokyo Bay from the Pacific Ocean and has a very mild, almost Mediterranean climate ideal for growing flowers.

The Boso Peninsula is the large chunk of land that separates Tokyo Bay from the Pacific Ocean. Covering most of Chiba Prefecture, the Boso Peninsula has a mountainous interior, a long coastline and once you are out of its heavily industrialized and densely populated northwestern part around Chiba City, it is very rural. 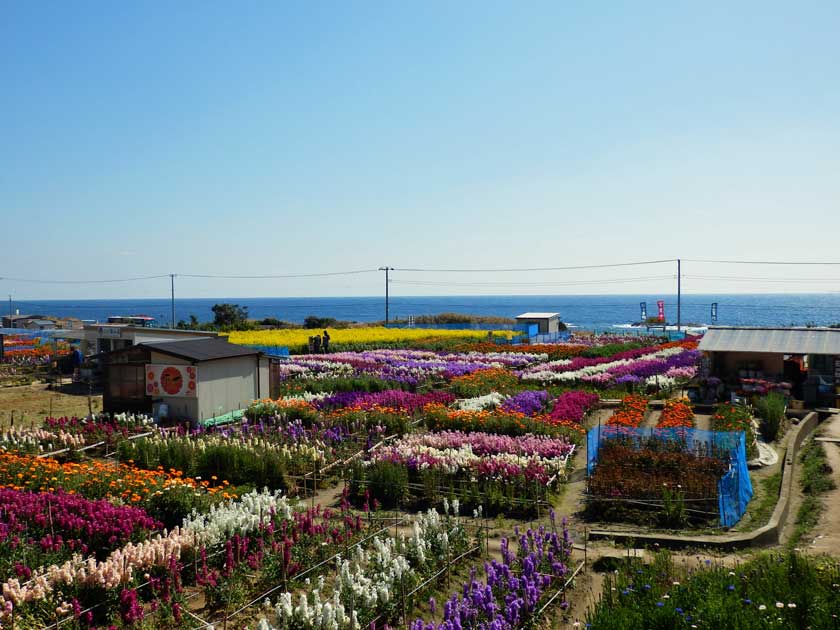 Flower garden at the sea in Chikura Town, Chiba Prefecture 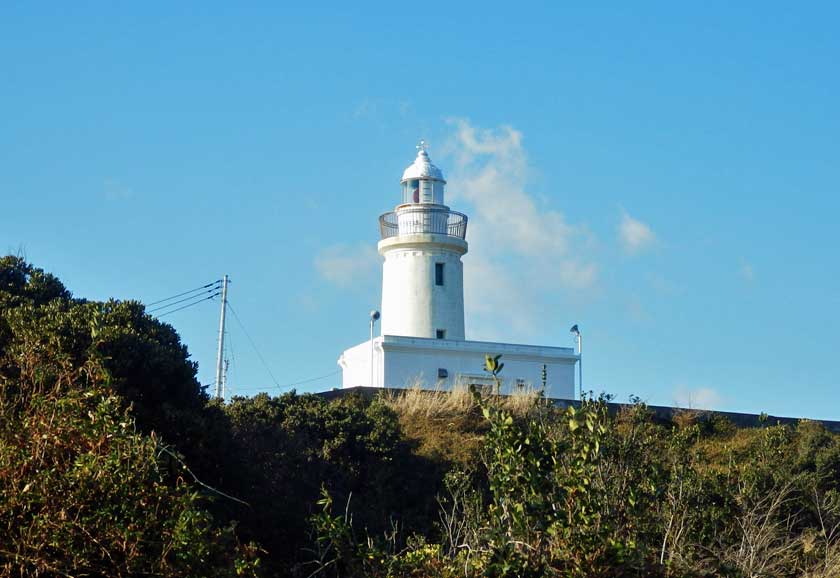 The southern-most edge of the Boso Peninsula has a very mild, almost Mediterranean climate. Even when the rest of Kanto is in a state of barren, dry winter, the many flower gardens along the coast in southern Boso will bloom colorfully.

In 1966, a tourist marketing genius convinced the various local authorities to officially designate the combination of Highway 257 and Highway 410, the roads along the southern end of the Boso Peninsula, as the Boso Flower Line. The concept worked - it brought plenty of visitors to the area which in turn led to the creation of even more flower gardens.

The Flower Line, in total about 20 km long, is definitely a winter destination. At that time of the year, close to Tokyo, only here will flowers be blooming in abundance. More good news is that those flowers are also on sale to visitors. 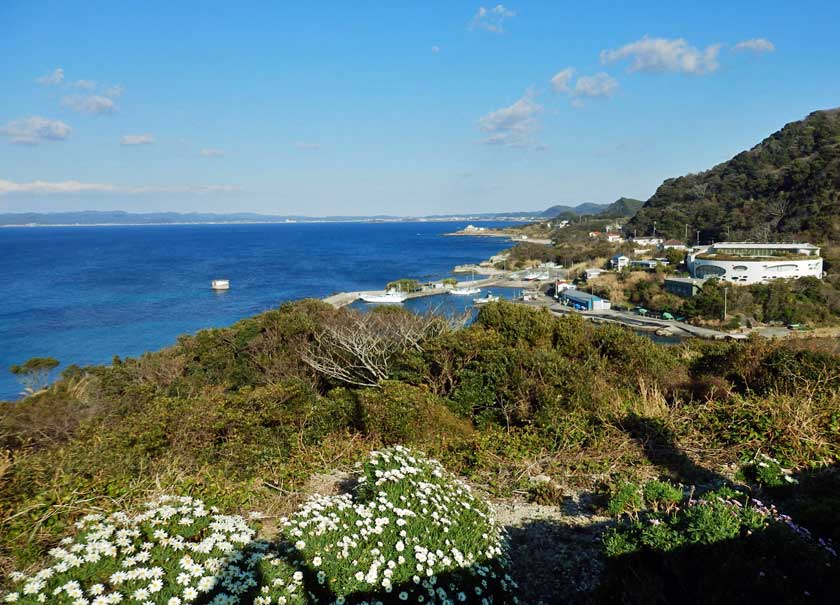 Landscape seen from the base of Sunozaki Lighthouse, Tateyama City, Chiba Prefecture 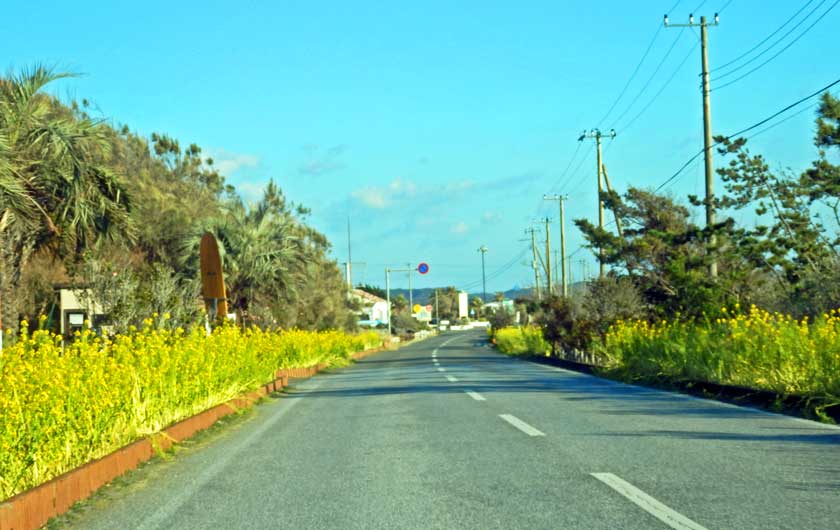 The Flower Line starts at Sunozaki Lighthouse at the south-western corner of the Boso Peninsula. The lighthouse, situated right at the entrance to Tokyo Bay, dates back to 1919 and has been providing guidance to ships heading for the harbors of Tokyo ever since.

Highway 257 from Sunozaki Lighthouse towards Shirohama Town is in February flanked by think bushels of bright, yellow rape flowers. They make for a great contrast against the dunes lining the sea and the bamboo woodwork erected to keep the dune sand from the road.

In early March, the then slightly fading rape flowers along the road will be mercilessly cut down by municipal workers.

Shortly before reaching Shirahama Town, the Highways 257 and 410 merge and will from then on be marked as Highway 410.

In Shirahama Town, you can visit the Nojimazaki Lighthouse. That's the southern-most lighthouse on the Boso Peninsula. Its original structure was the second western-style lighthouse erected in Japan, in 1869. That original lighthouse collapsed during the Great Kanto Earthquake in 1923. The current structure dates back to 1925 and is open to the public.

Right next to the lighthouse is a Shinto shrine, the Itsukushima Shrine. It doesn't look very spectacular at first glance but if you look closer, you will discover a very interesting little sub-shrine devoted to the abundant fertility of the area.

Driving on, you might wonder where the flowers of the Flower Line actually are. You drive through small towns and villages, there are mountains to the left and the sea to the right but besides the rape flower spots here and there, where are the flowers?

The flowers will eventually come up big time once you enter the town of Chikura in the south-east which marks the end of the Flower Line. There, the Flower Line splits into a coastal and a more inland route, both being well worth checking out. From now on, it's flower garden after flower garden, colorful patches set against the background of a deep-blue sea. 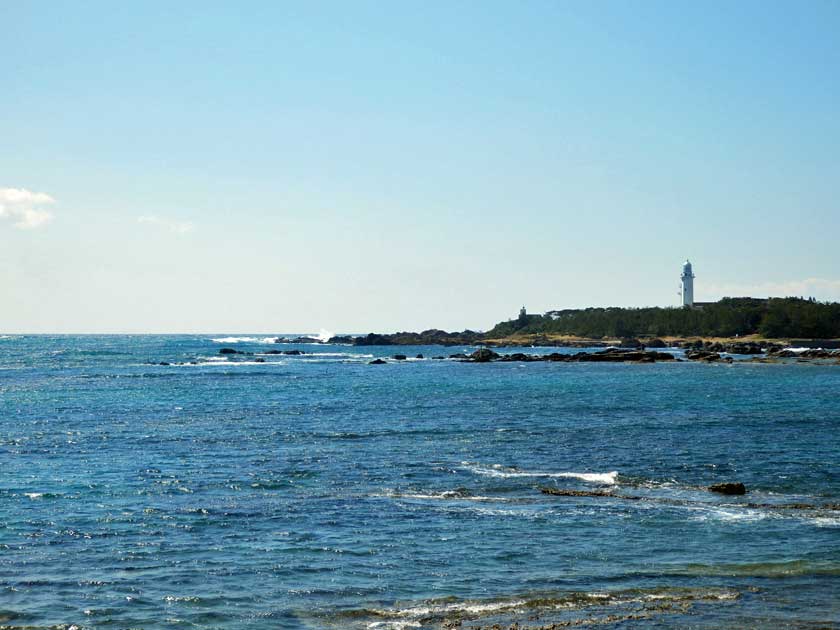 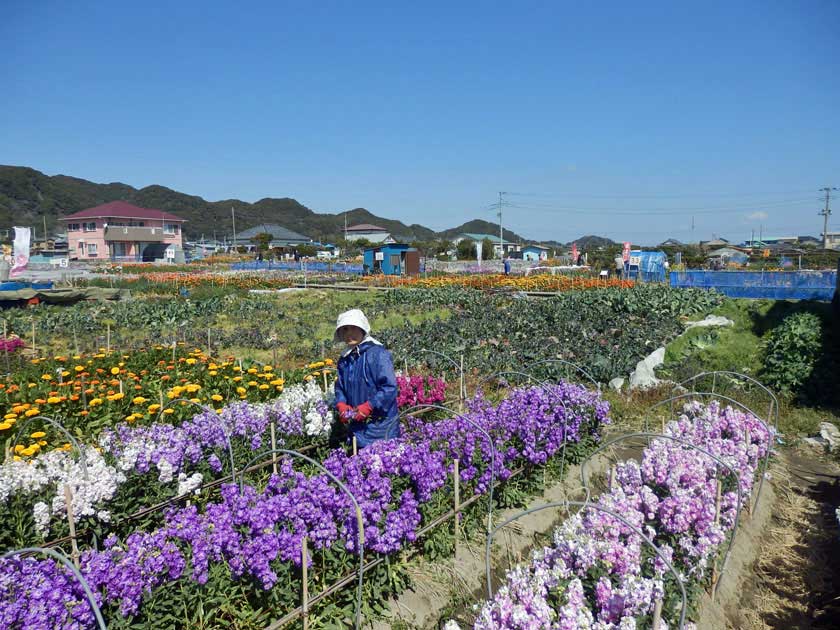 The Chikura Shiokaze Okoku Rest House area is the center of the flower area. The rest house itself, right at the sea, offers a local fish market with various restaurants, souvenir shops and the like. Cross the road and you will enter a huge flower garden setting.

Hana tsumi, many signs spell out. That translates as "picking the flowers". You can walk freely between the various flower fields and pluck any flower you like. The owner / flower grower of the respective plot of land sits in front of a little hut storing his gardening tools. You show him the flowers you took and he will tell you the price. Just make sure not to mix up different flower gardens in your collecting.

Flower picking by visitors, that's how the gardeners make their money here. Choose any flower you want, cut it, pay the gardener in cash.

It all looks so easy and the flower gardener will always have a friendly smile. But if you get into a deeper conversation with one of the gardeners, he / she will tell you that actually, growing flowers here is not that easy.

Sure, the climate helps and that's the reason in the first place that they do it. But the original ground here is solid rock with very little soil cover. The fertile soil to grow the plants has to be trucked in from areas more inland. 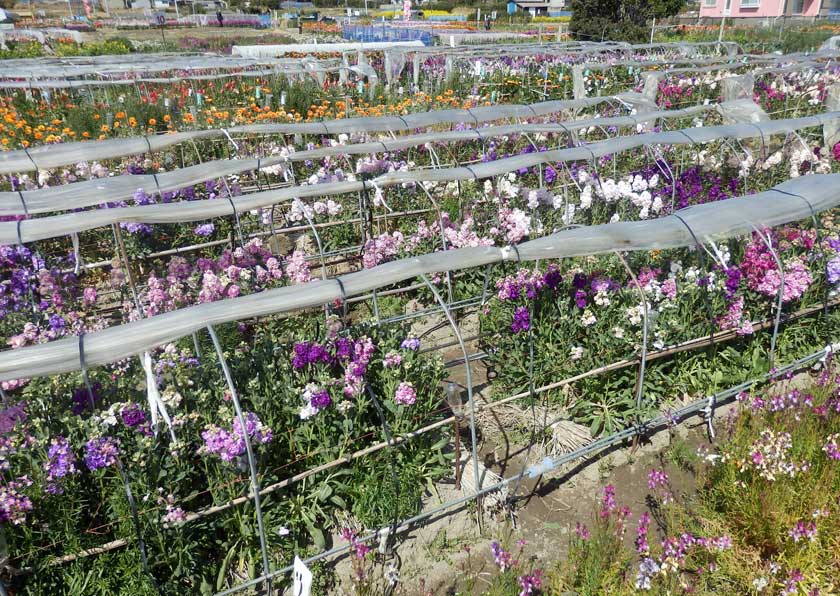 Plants and soil need to be protected against typhoons, Chikura Town, Chiba Prefecture

Planting time for the winter season is September. That's right before the annual typhoon season which comes in with very strong storms here. Soil and plant protecting gear has to be fastened down seriously to protect from the typhoons washing / blowing away all the seedlings. Particularly strong typhoons can wipe out the whole harvest for a season. It happens every few years.

Many of the flowers are ready for sale in December. December through March is the main season here. The flowers are mainly poppy, marigold, stock (Matthiola), and a whole lot more for which a correct English translation is not readily available.

The end of the season is marked by the spring equinox, the official beginning of spring. Spring equinox day is called haru o-higan in Japanese and that is in Japan traditionally a day to visit the graves of the ancestors and lay down flowers there.

In the days before haru o-higan, tour buses from across the bay, from Tokyo and Yokohama, will crowd the Flower Line. Not many flowers will be left in the gardens after those days of shopping frenzy.

The flower gardeners will soon after start to grow new varieties on their fields. Sure, they look pretty but by then, flowers will bloom all over Japan.

With the exception of a few public holidays, the Flower Line is a very relaxed drive with hardly any traffic and almost no traffic lights. It's flat too, making it an easy destination for hobby bicyclists.

Along the road are several hot-spring onsen baths. Most belong to hotels but some are public. Just keep your eyes open if you are interested in a hot soak. 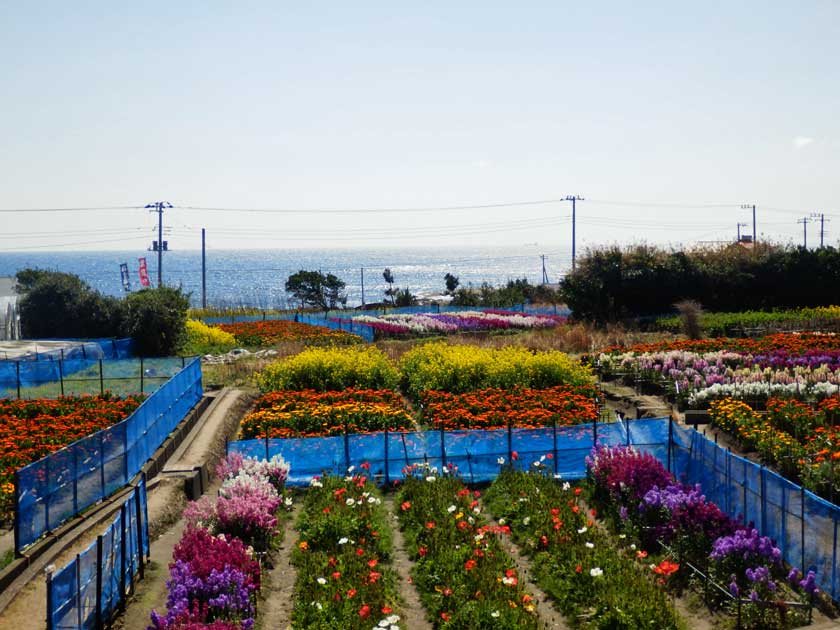 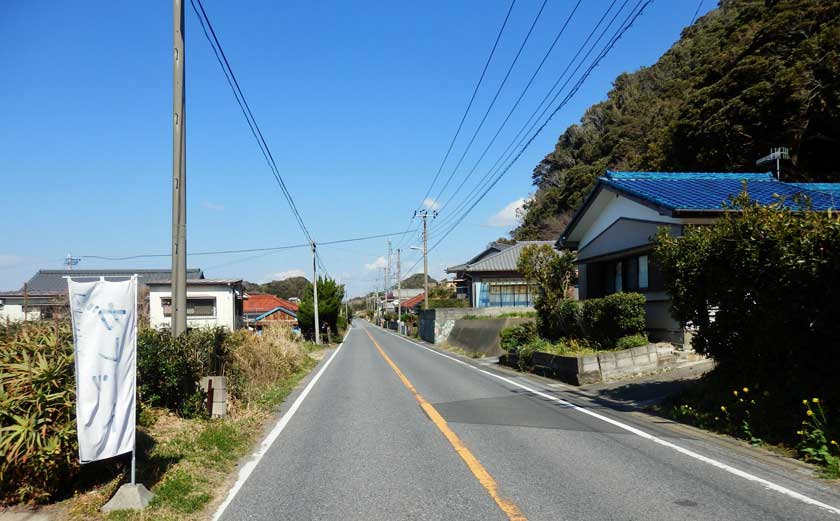 From Tokyo, take a JR Chuo Line train to Chiba Station. There, change to the JR Uchibo Line and go to either Tateyama Station (a few kilometers from Sunozaki Lighthouse) or to Chikura Station.

Cross Tokyo Bay using the Aqua Line. At Kisarazu Junction, turn onto the Tateyama Expressway. Drive to the end of the expressway in Tateyama. In the city of Tateyama, go onto Highway 257 in a southern direction. That is the highway to the Sunozaki Lighthouse where the Flower Line starts.

Tateyama Station can only be recommended if you bring your own bicycle.

At Chikura Station, you can rent bicycles. The rental office is open daily from 9am to 5pm. A bicycle is 1,000 yen per day. Please bring I.D.

The Flower Line, about 20 km long, can easily be explored by bicycle in one day.

To use ferry the train - ferry connection from Tokyo, take the Keikyu Main Line from Shinagawa Station to Horinouchi , change there to the Keikyu Kurihama Line, get off at Keikyu Kurihama Station. Then take a taxi or bus number 7 or 8 to the ferry port.

If you travel by train, walk from Kanaya Port to nearby Hama Kanaya Station on the Uchibo Line and take a train to Tateyama or Chikura.

The ferry also takes cars. The fare depends on the size of the car. For example, a one-way ticket for a car shorter than 4 meters is 3,120 yen.

Please see further information on the ferry, its schedule and fare charges on the English-language Tokyo Wan Ferry website. 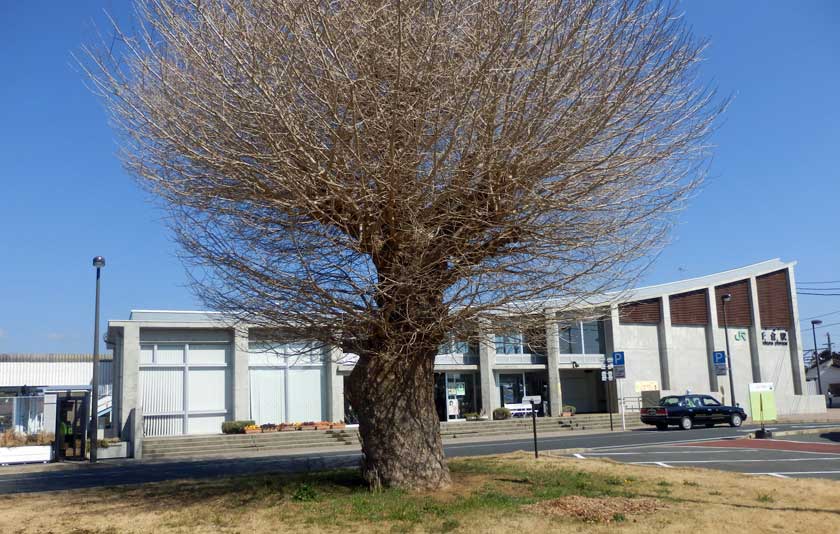