Sakamoto Ryoma is probably the best known samurai hero of the Bakumatsu Period in the 1860s when an alliance of the Satsuma and Choshu domains (present day Kagoshima and Yamaguchi Prefectures) overthrew the Tokugawa regime.

Sakamoto's early and violent death, aged only 31, at an inn in Kyoto has guaranteed his legendary status, particularly among the young, as almost a Japanese Che Guevara. 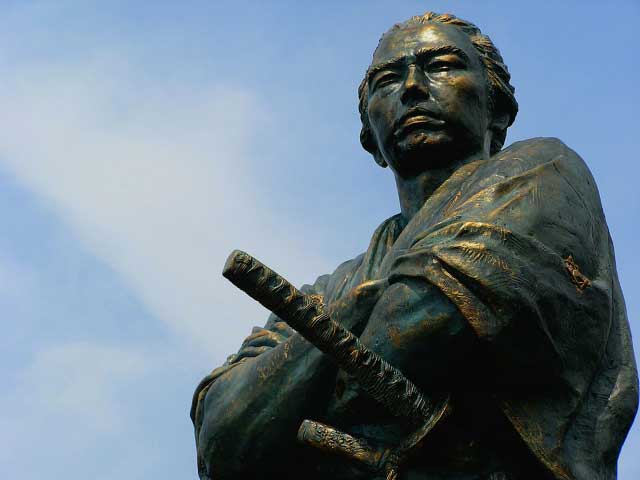 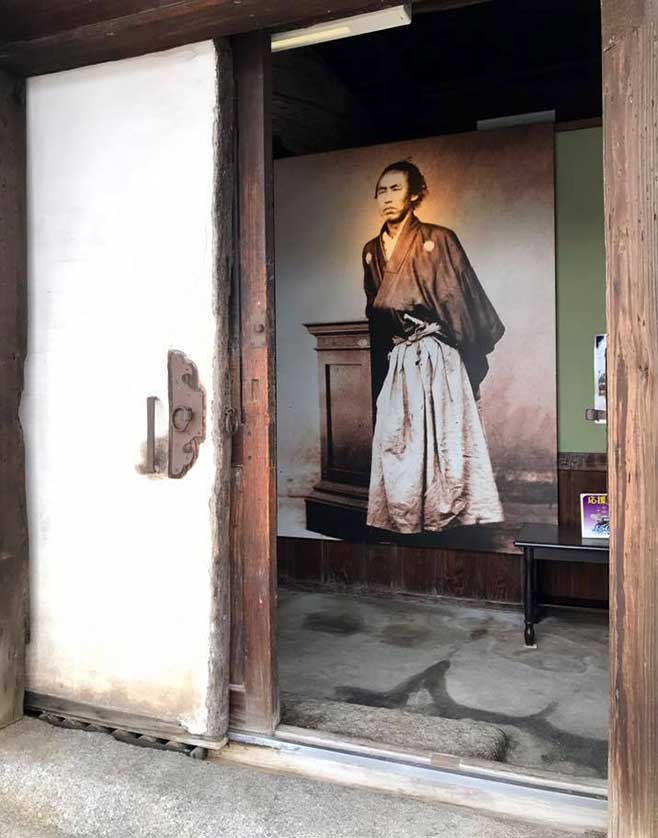 Born in Kochi on Shikoku to a lowly samurai family, Ryoma supposedly overcame his youthly weakness by training himself to become a master swordsman.

Initially a hot-headed adherent of the sonno-joi ("revere the Emperor; expel the barbarians) faction, Ryoma once vowed he would bring back a foreign head when he heard of Perry's landing in Shimoda in Japan. Later he was involved in a plot (subsequently abandoned) to assassinate Katsu Kaishu, a leading Tokugawa official, who was involved in negotiations with the foreign powers in Japan and a prominent supporter of Japan's westernization. Sakamoto later became a protege and follower of Katsu, although they were nominally on opposite sides of the political fence.

Under Katsu's patronage he was put in charge of a new naval training college in Kobe, from which began his later interest in ships and trade. With the help of Saigo Takamori, a Satsuma leader, Sakamoto set up a small merchant fleet in Nagasaki - the Kameyama shachu - and purchased a steamship from the western businessman Thomas Glover. Sakamoto's small flotilla also doubled as a navy, the Naval Auxiliary Force (or kaientai) for the anti-Tokugawa forces. 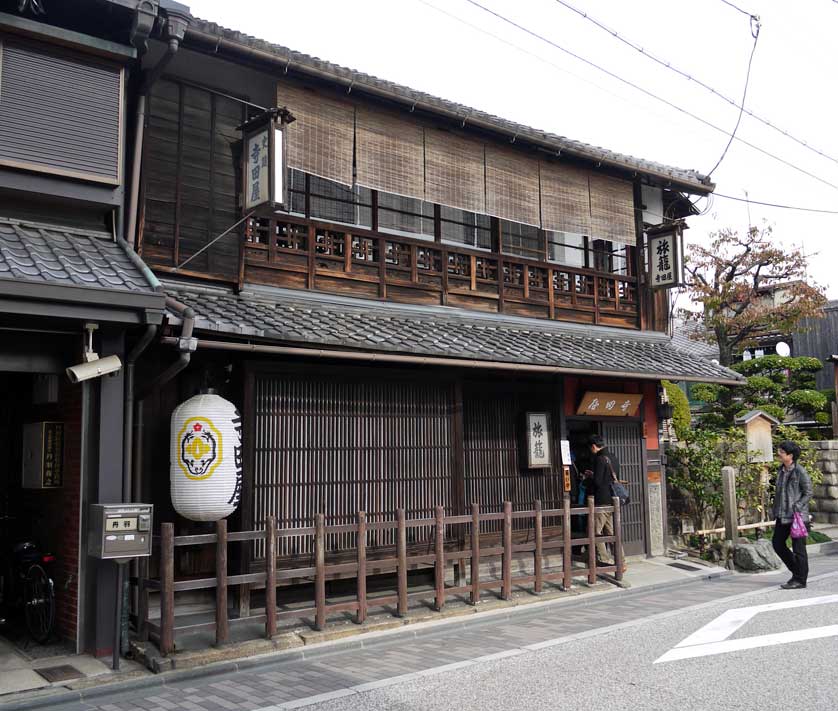 The historic Teradaya inn in Fushimi, south Kyoto, where Sakamoto Ryoma survived an attempt on his life

Sakamoto Ryoma's greatest achievement is seen as his work in establishing the critical alliance of the powerful Choshu and Satsuma domains, which would provide the backbone of the forces that eventually overthrew the Tokugawa in the brief Boshin War (1868-1869).

Sakamoto was also influential in the debate that lead to the last shogun Tokugawa Yoshinobu stepping aside in 1867, thus paving the way for the restoration of power in the name of the Emperor.

Sakamoto's political writings Senchu Hassaku outline an enlightened blueprint for a more democratic Japan based on equality and regional representation.

Sakamoto had already survived one assassination attempt at the Teradaya Inn near Fushimi in south east Kyoto before he was killed in mysterious circumstances together with his companion Nakaoka Shintaro in a raid at the Omiya inn and soy sauce shop in downtown Kyoto.

The airport in Kochi is named after their famous son and several museums in the city celebrate their hero.

The most important museums dedicated to Sakamoto Ryoma are in his birth city of Kochi in the south of Shikoku, however, Ryoma traveled much in Japan during his short life, much of it spent on the run, and spent time in Edo (Tokyo), Kobe, Kyoto and Nagasaki.

The Ryoma museums in and around Shikoku include the Sakamoto Ryoma Memorial Museum out near Katsurahama Beach on the coast south of Kochi city. The Sakamoto Ryoma Memorial Museum opened in 1991 and has a number of original and replica exhibits from Ryoma's life on display. These include letters, calligraphy, a portrait of Ryoma by Kunisawa Shinkuro, who studied Western painting in England, Ryoma's Smith & Wesson pistol, and a grisly replica of the blood-stained folding screen from the room of his murder in Kyoto.

In Kochi city itself, the Kochi Municipal Ryoma's Birthplace Memorial Museum is another excellent museum dedicated to the great man. The museum is located near the great man's actual birthplace, which is celebrated with a large stone plaque outside Kamimachi Hospital. The Kochi Municipal Ryoma's Birthplace Memorial Museum recreates the old Kamimachi district of Kochi where Ryoma grew up in the family of lower ranked samurai using video, wall panels and models.

The Kameyama Shachu Memorial Museum in Nagasaki is a restoration of the building that housed the shipping company begun by Sakamoto Ryoma. Historians see the Kameyama Shachu (aka Kaientai 海援隊), Japan's first trading company, as a forerunner of the Japanese navy. On display are a number of Ryoma's personal effects including his haori - a traditional kimono jacket which his family crest (mon) on the chest. There is also a secret mezzanine floor reached through the ceiling if the occupants needed to hide from any shogunal spies.

In Kyoto, Ryoma seekers can visit the historic Teradaya inn in Fushimi, south of the center, where Sakamoto Ryoma survived an assassination attempt because his future wife Narasaki Ryo who, so the story goes, ran naked from her bath to warn him of the approaching assassins. Visitors can still see a sword cut in one of the wooden pillars at the inn.

The Omiya inn in downtown Kyoto on the main shopping street of Kawaramachi where Ryoma was killed on December 10, 1867 no longer exists and only a stone moument marks the spot.

To see Ryoma's grave head to the cemetery of Gokoku Shrine near the Gion district in Kyoto. Across the street is the Ryozen Museum of History, largely dedicated to the Bakumatsu Period and the overthrow of the Tokugawa. Here the events of Ryoma's death are presented in detail including a gory model of the deaths at the Omiya inn. 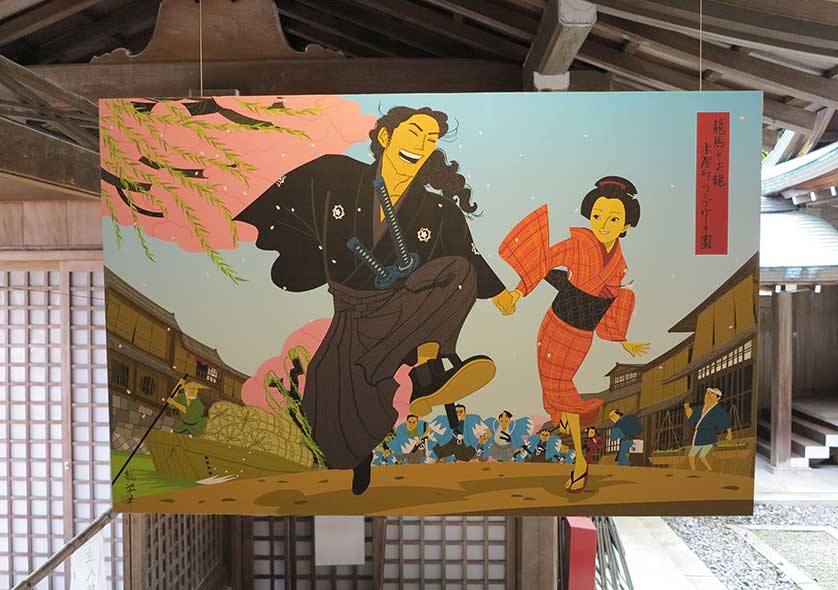 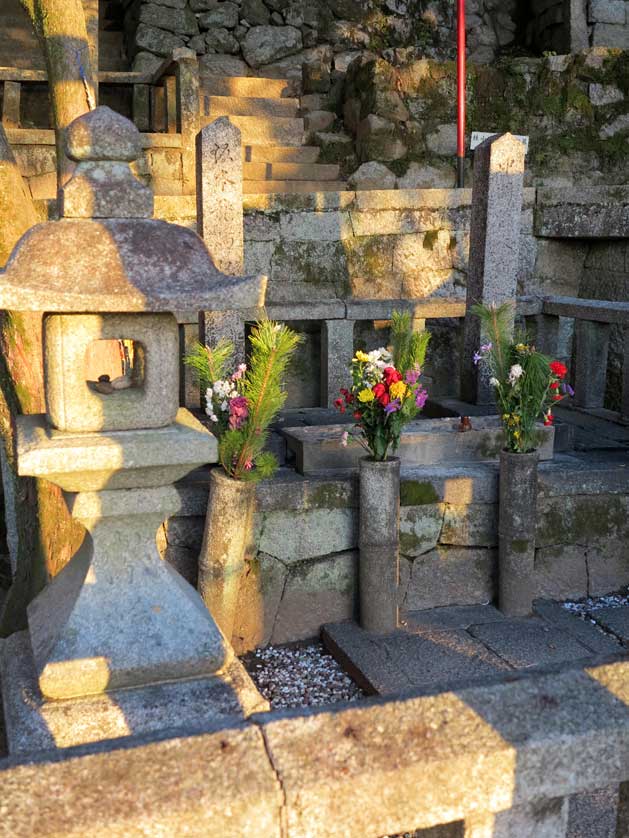 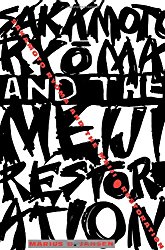 If you wish to read more about Sakamoto Ryoma then Sakamoto Ryoma and the Meiji Restoration by Marius Jansen as well as Samurai Revolution by Romulus Hillsborough, who also penned Ryoma: Life of a Renaissance Samurai, should be on your list.

In Japanese the list is much more extensive with the Sakamoto Ryoma publishing industry churning out not just books but manga and movies as well. There are also documentaries on DVD produced by the various Sakamoto Ryoma-dedicated museums. Amazon Japan lists Ryoma 1865 beer (non-alcoholic), Ryoma cups, Ryoma cufflinks, Ryoma Zippo lighter (the last two with his personal crest), Ryoma bags, figurines, T-shirts and even worry-beads.

Sakamoto Ryoma: read a life of the Japanese reformer and samurai Sakamoto Ryoma 1836-1867. One of Japan's great heroes Sakamoto Ryoma is known as the Che Guevara of Japan and his political deal-breaking helped to bring down the Tokugawa regime.