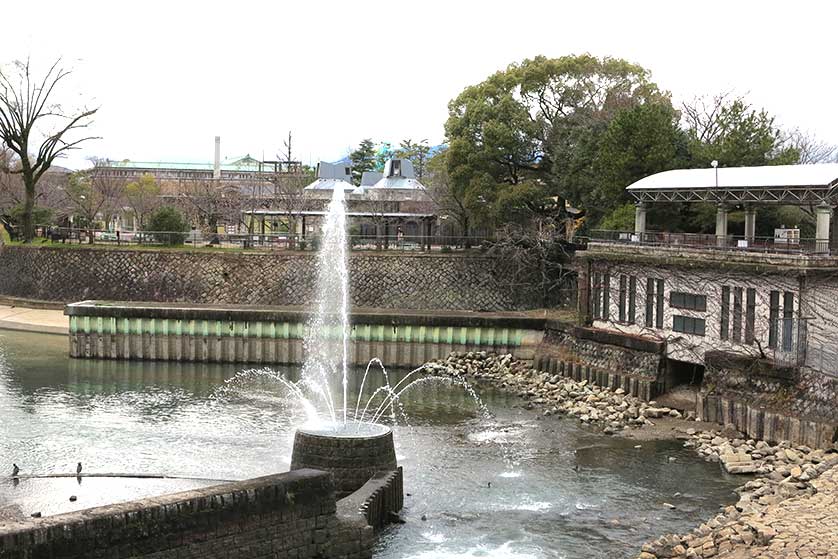 Many visitors to Kyoto have walked the Philosophers Way, a path along the bank of a canal lined with cherry trees.

Not so many realize that this canal saved the life of the dying city. No far away, at the point where the water joins the Kamo River, you will find the Lake Biwa Canal Museum of Kyoto, which tells the story.

Kyoto was capital of Japan, and home to the emperor, for centuries. The finest things were brought there. Little was produced, and little taken away.

When the capital was moved to modern-day Tokyo, it struck a blow not only to Kyoto's pride, but to her livelihood.

The city was destined for rural ignominy, but it sometimes happens that a confluence of ideas, resources, and exceptional people will change the course of history.

In the late nineteenth century the mayor of Kyoto and the new emperor agreed they must find a way to reverse Kyoto's decline.

Their answer was to revive an idea that had been alternately proposed and rejected for the last seven hundred years: a canal that would bring water to Kyoto from Japan's largest lake, Lake Biwa, twenty kilometers away. 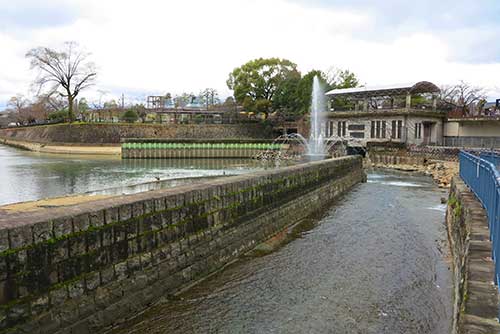 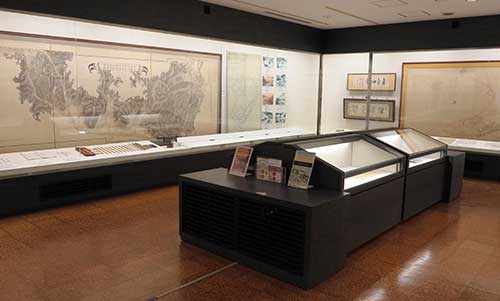 The project was still controversial, and the estimated cost was ten times Kyoto's annual budget.

Even with a large contribution from the emperor, and the backing of the mayor, it still might not have been undertaken, but for the appearance of a young man of genius.

Tanabe Sakuro, undeterred by losing the use of his right hand during the practical part of his education, taught himself to write and do mechanical drawing with his left, to complete a degree in engineering, and apply himself to the problem of the canal. Shortly after, still in his early twenties, he was commissioned with the Lake Biwa Canal Project.

The first floor of the museum shows the obstacles he had to overcome. Numerous maps and plans are displayed, some accompanied by dire predictions. They all make it clear that the major obstacles were the mountains that stood along any path the canal might take.

To Tanabe, that meant that, for long distances, the water would have to travel underground. He studied tunnel construction and planned three brick-lined tunnels through the mountains.

The museum contains photographs and drawings that detail construction of the tunnels. There were no brickyards, at the time, nor were there mules to haul the bricks. The yards were made, and women pitched in to bring the bricks to the men working to build the tunnels. And those men presented a different kind of challenge to Tanabe.

Before the construction of the canal, there were virtually no civil engineers in Japan. In the museum there is a copy of the textbook Tanabe wrote and used to conduct night classes, to educate his workforce.

He educated them, and he must have inspired them, as well. On display are commemorative pieces for the completion of different phases of the canal project. Most of them are brightly colored sake cups, but one is a somber black ink stone, because it also a memorial to the engineer who died during the completion of the tunnel that it celebrates.

There are other artifacts in the museum. There is an electric fuse for setting of dynamite, because this was the first time dynamite had been used in Japan. A water wheel and dynamo from Japan's first hydroelectric power plant are preserved. The plant was built in Kyoto when the canal was complete after eight years of construction. 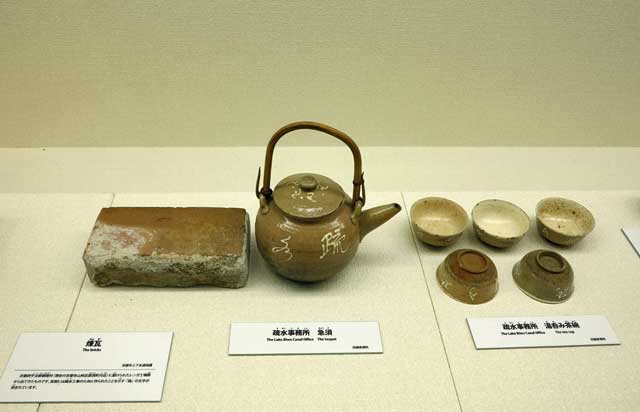 Exhibits at the Lake Biwa Canal Museum in Kyoto 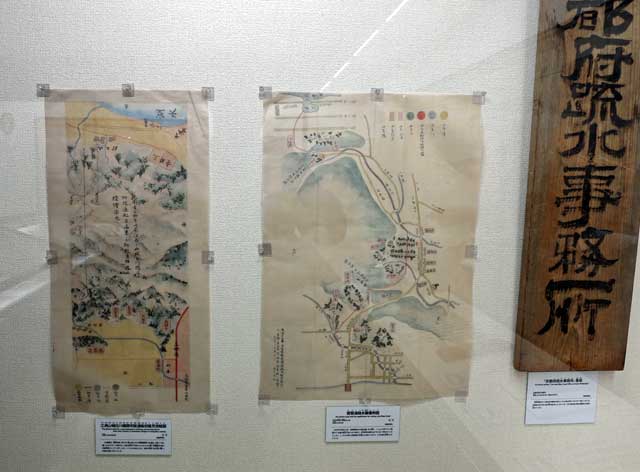 When the work was done and the vision completed, the canal brought water, electric power, and more. In the museum, there is a working model of a something called The Incline. 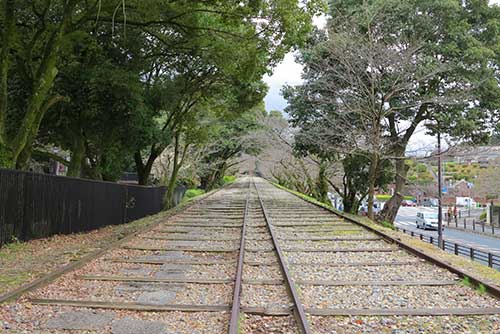 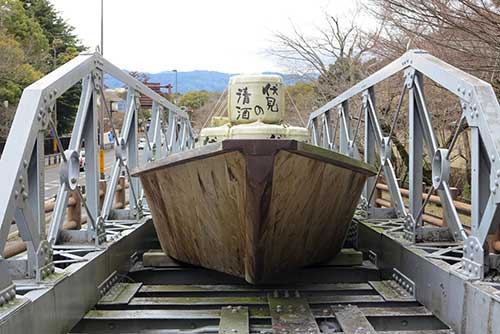 Boat loaded on a rail carriage, The Keage Incline, Kyoto

To get the boats over the last leg of their journey to the Kamo River, Tanabe designed a short, two-way railroad that ran over a gradual slope between the power plant and the river. Press a button on the model and you will see how canal boats were loaded onto metal frames, one at the power plant and one at the river, pulled by a cable in opposite directions over The Incline, then unloaded again to go their separate ways.

The canal changed the face and fate of Kyoto. Electric power modernized her struggling textile industry. The museum displays examples of public water fountains and spigots, because the city, once used to water shortages, now had water to spare.

It has photographs of old electric street lamps, because Kyoto had become a city of light. There is a model of a street car, because the canal made possible Japan's first electric railway that connected Kyoto with the port of Fushimi.

A good way to enjoy the museum and its environs is to take exit one from Kyoto subway's Keage Station and turn left. A little way up the street, a narrow, stone lined path leads uphill toward a large, stone torii gate. In front of the gate is a bridge that runs over the canal.

There, you will see the power plant (now used for water purification) on your right, and one of the frames for The Incline with a canal boat mounted in it, to your left. Beyond, there is a park with a statue of Tanabe and the top of The Incline.

You can follow the canal through the park, and it will lead you to a shady lane that runs through the forest outside Nanzenji Temple with the canal burbling beside it.

The path ends at the top of a Roman-style aqueduct. This is a lovely piece of architecture, a popular location for Japanese television dramas, and a favored spot for amateur photographers and their models.

Double back and return to the park. The Incline is no longer in use for the canal boats, and has been set with large flagstones making it a walking path.

Follow it, and just before you come to the end, you will go under an overpass. When you emerge, the end of the Incline sloping down into the Kamo river, will frame a view of the huge fountain in front of the museum. climb up the steps on the left and you will be on the museum grounds. 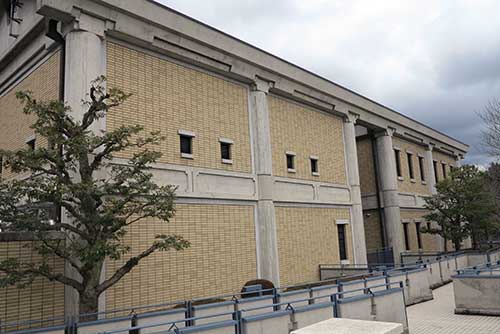 The hours are 9.00 am to 4.30 pm from March through November, and 9.00 am to 4.00 pm from December through February. Closed Monday or the next day if Monday is a national holiday. Closed December 28-January 3. Admission is free.

Lake Biwa Canal Museum of Kyoto is a short walk from Keage Station on the Tozai Line of the Kyoto subway past the Kyoto International Community House.

Text and Photos by Alan Wiren 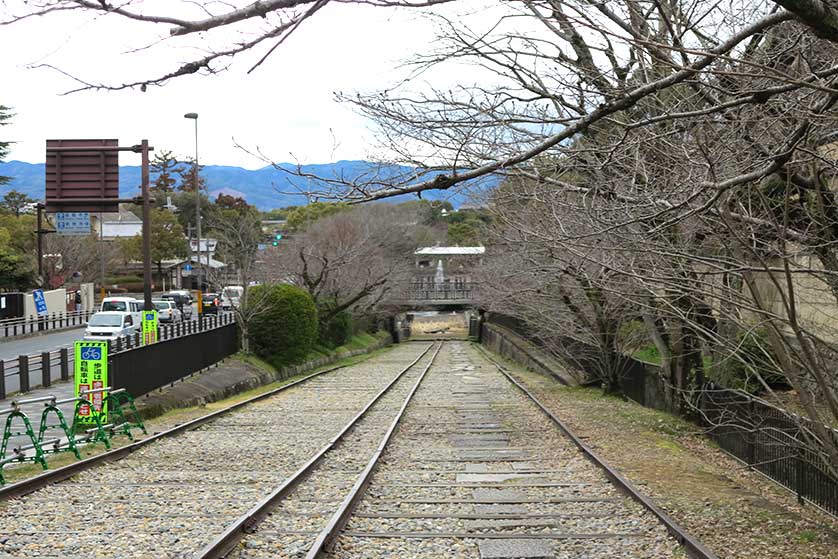 Looking down the Incline to the Lake Biwa Canal Museum