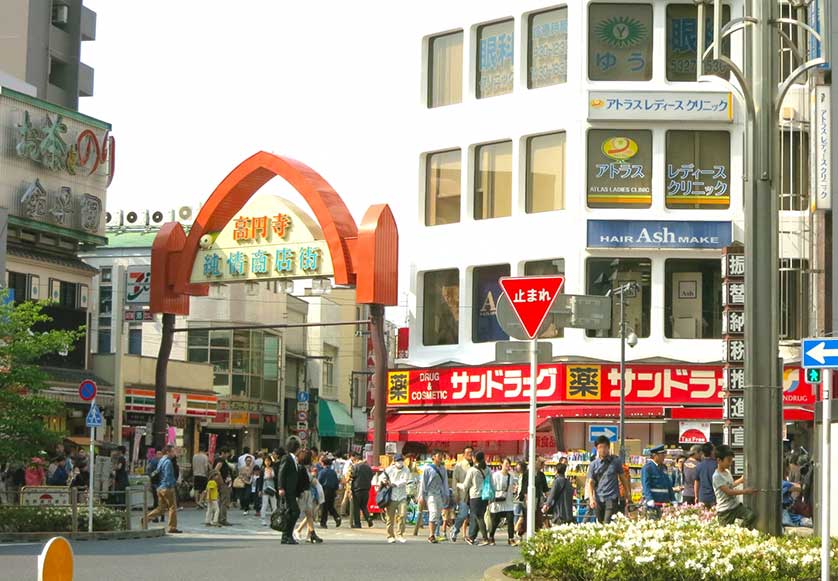 Koenji is in Tokyo's Suginami ward in the area around Koenji Station on the JR Chuo Line.

Koenji is famous firstly as a center of alternative youth culture in Tokyo, in particular for its second-hand clothing stores: the most of anywhere in the metropolis, followed by Shimokitazawa about 5 km south.

There are 18 shopping promenades in Koenji within its approximately 2 square kilometer area as well as large numbers of small bars, live houses, and ethnic restaurants, music stores, book stores, head shops, and tattoo parlors. There is a red-light area, too, very near the station

Koenji is also well known for its numerous historical Buddhist temples and one or two Shinto shrines.

Koenji is the venue of the massive summer Koenji Awaodori Dance Festival, one of Tokyo's Big Three Festivals. 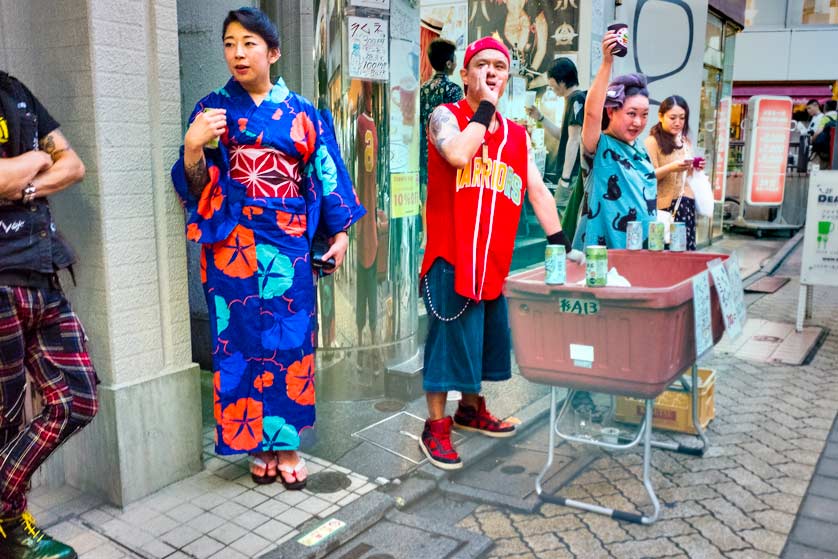 Present-day Koenji's roots are in the Great Kanto Earthquake of 1923. In the two decades before then it was remarkable only for its numerous temples relocated from central Tokyo. Otherwise it was a sleepy farming settlement on the Ome-kaido Highway.

The immediate aftermath of the Great Kanto Earthquake of 1923 saw an influx into Koenji of small merchants and laborers displaced from downtown Tokyo by the destruction. Koenji Station had just opened in July 1922, making it convenient to Tokyo, as well as an Ogikubo-to-Shinjuku tram that stopped at several places in Koenji.

The local farmers subdivided their land and put up cheap housing for the new entrants. Businesses catering to them sprung up along the transportation routes: open air markets, stores for household wares, and cheap eateries-cum-bars.

In the 1950s, Koenji was well known for its tea and coffee houses (kissaten) and for the start of the Awa Odori Festival - a smaller-scale copy of the famous Awa Odori Festival in Takamatsu, Shikoku, started by Takamatsu natives who had moved to Tokyo, and in the 1970s - along with Nakano a couple of stations east on the Chuo-Sobu Line - for its youth music scene, most notably, Japanese punk.

These roots are still alive in today's Koenji. It is a young, energetic, free neighborhood with a 24-hour vibe, where fun and adventure can be had without breaking the wallet. And, if you're wondering about safety: of course, care must be taken wherever you are, but we have never seen any trouble to speak of in Koenji. 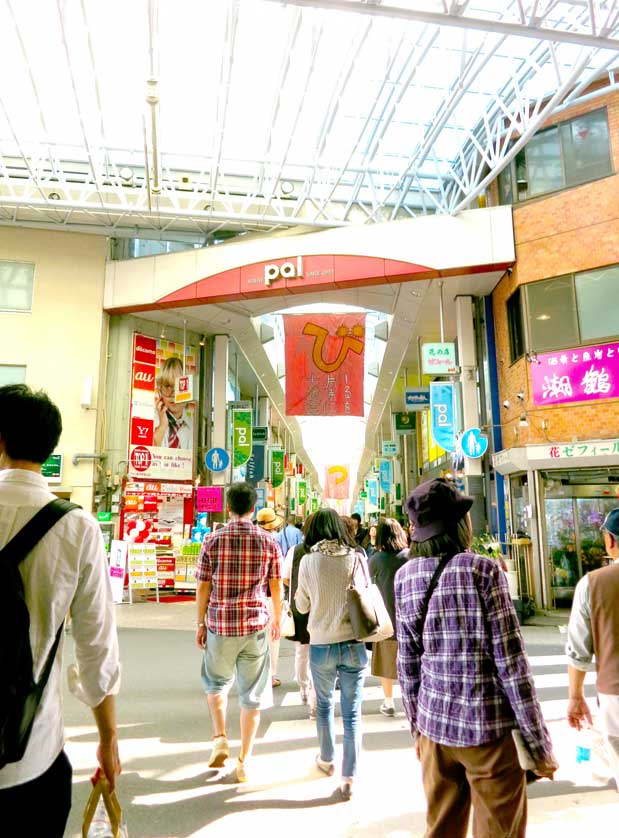 ClothingKoenji is - along with Harajuku and Shimokitazawa - famous for its second hand clothing stores. Turn right out of the south exit of Koenji Station, walk through the covered PAL Arcade, and you are in the second hand clothing store area, centered around Look Street, which runs all the way down to Shin-Koenji Station on the Marunouchi Subway Line.

Look Street is where the young come to look for cool, usually second-hand, clothing. The street escaped damage during WWII, and stores from that era give the street a retro feel. Far from hawking just grunge, most of the merchandise is in very good condition, and many very well priced, cutting edge, good looking items are to be found.

Music, books, old toys
Koenji is also renowned for its music scene. Koenji has a reputation as the birthplace of the punk movement in Japan, and is packed with "live houses" (i.e. tiny clubs for live bands).

Koenji's many second hand music stores are a music collector's paradise stocking a lot of rare items. Even for those with a more casual interest, such stores - not to mention the bookstores and old toy stores also in the area - offer some fascinating finds.

Koenji is one of the best places in Tokyo for cheap and varied nighttime entertainment. The entrance to Koenji's main nightlife center is Nakadori Shotengai, or Central Road, just west of the station and running parallel to the northern side of the JR Chuo/Sobu railway line. Enjoy the glorious mixture of yakitori shops, izakaya, strip clubs, live houses, theme bars, ethnic bars and restaurants (check out Persian belly dance bar BolBol), karaoke bars, head shops, and more. For cheap, cozy drinking check out Bar Secret Base Zero, where everything is 500 yen. 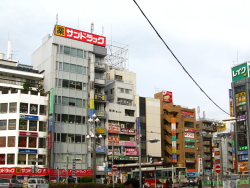 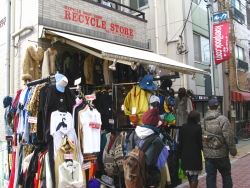 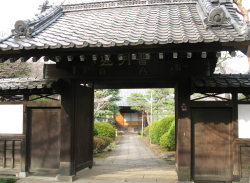 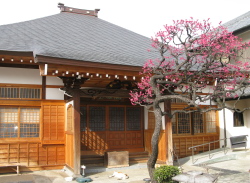 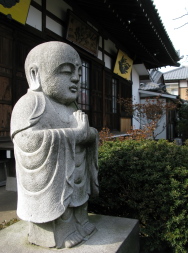 Koenji is home to 12 temples and a shrine, nearly all of them south of the station. 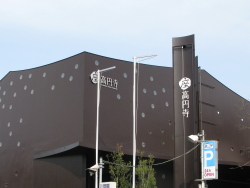 Za-Koenji Public Theater is a theater that strives to be avant garde - but retains a very barn-like appearance - opened in 2009.

Za-Koenji is for contemporary performing arts, including drama, dance, music and storytelling. It comprises a 230-seat main auditorium, a large civic hall, an Awadori Hall (especially for the Awadori Festival - see below), an archive of contemporary Japanese theater, and the Cafe Henri Fabre.

Za-Koenji is just a short walk east from the North Exit of JR Koenji Station. 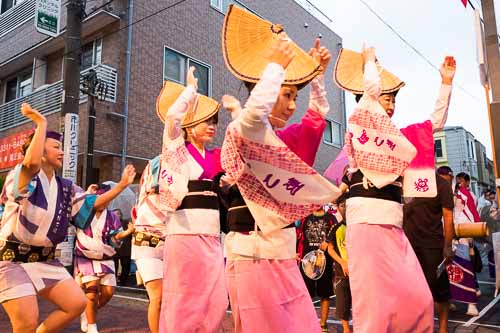 Koenji is famous for the Awa Odori Festival, held every August for 3 days from the last Friday of the month.

The Awaodori Festival dates back to 1957 and is now one of Tokyo's biggest, drawing over 10,000 participants, and up to a million spectators. The Koenji version of Awa Odori is based on the famous Tokushima original Obon dance.