Kujukuri Beach is a 60 km long stretch of uninterrupted sandy beach on the Pacific Coast in north-east Chiba Prefecture.

If you arrive in Japan by plane from across the Pacific Ocean, Kujukuri Beach is most likely the first glimpse of Japan that you get on your way to Narita Airport.

You see a long stretch of sandy, flat beach, bordered by rural vegetable farms, further inland you fly over the rice paddies of central Chiba before the captain calls out to fasten seat belts and get ready for landing.

It's a sight most likely quickly forgotten in the hectic rush of the airport procedures while looking ahead to the excitements of Tokyo.

But if you settle in Tokyo for a longer term, Kujukuri Beach might just be where you want to go as a respite from the stress of the city. 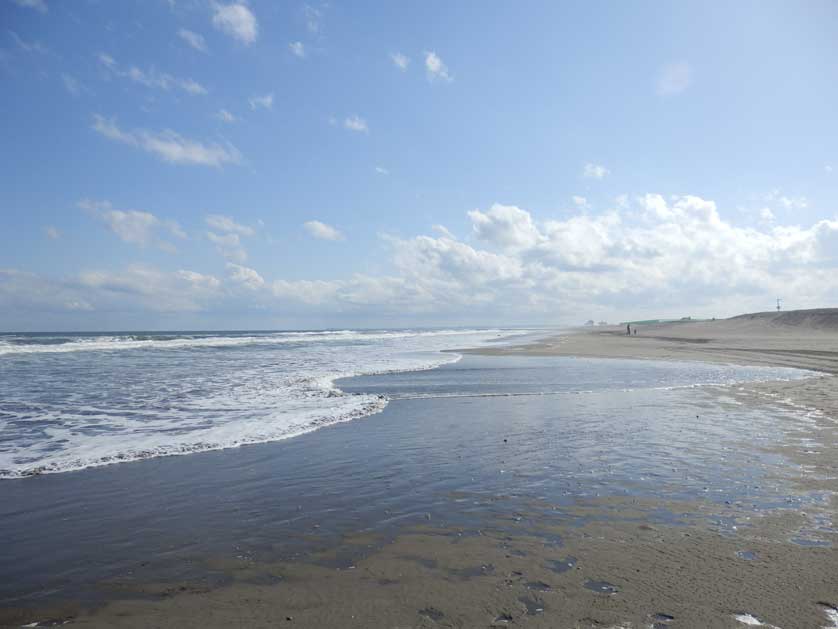 Kujukuri Beach is an approximately 60 km long stretch of uninterrupted sandy beach on the Pacific Coast in north-east Chiba Prefecture. A rarity in Japan where most of the coast is shaped by smaller bays.

There are no reefs out front and long, high Pacific waves crash right onto the beach. This makes Kujukuri a favorite spot for Tokyo surfers who can been seen riding the waves in all seasons.

A southern current keeps the sea relatively warm well into November, thus attracting many people looking for a swim in the ocean. The often strong winds draw many folks flying their kites.

Just a short walk away from the parking lots, however, and you can walk the beach in perfect solitude. The sand dunes lining the beach add to the melancholic feeling of walking alone along a seemingly endless stretch of windy beach.

Though there are a few modern high rise hotels, most of the beach has seen very little recent development. Old farm houses and fishermen's dwellings dominate the coastline, small minshuku and ryokan are the most common places for accommodation for visitors.

Many of the villages close to the beach look somewhat rundown and weather beaten. The storms coming in from the ocean have certainly left their mark. At the same time, their weather beaten look gives these villages a distinctly old-fashioned charm.

Kujukuri Town (Kujukuri machi, 九十九里町) is a small fishing town located in the center of the beach. It sports a small fishing harbor, a number of good restaurants and yes, many rundown houses. 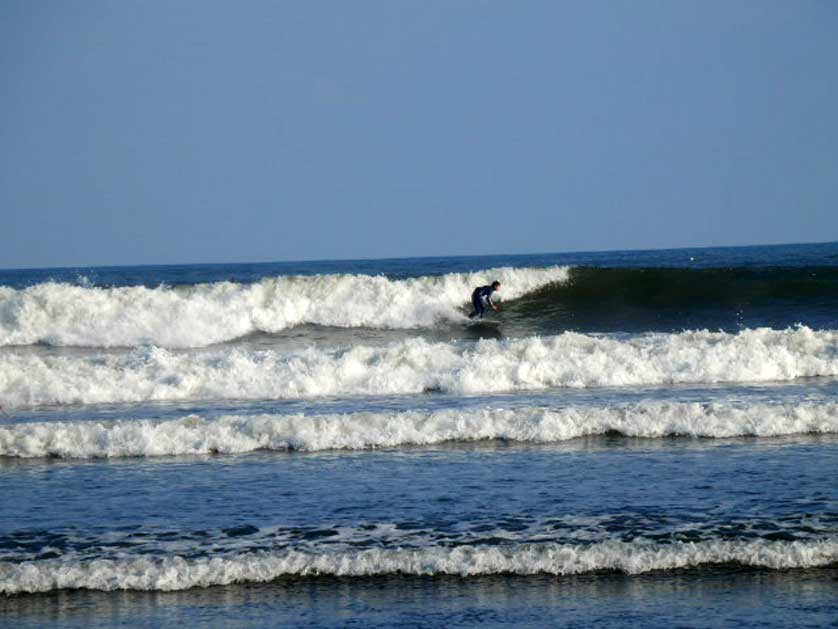 Surfer in the waves at Kujukuri Beach, Chiba Prefecture 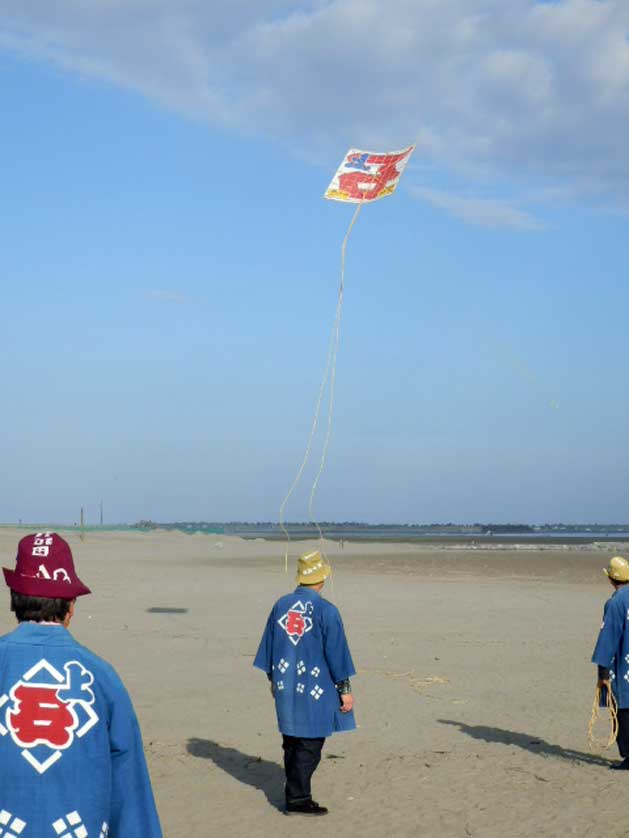 Kujukuri translates as 99 ri, ri (里) being an old Chinese unit for measuring distance. The length of ri has undergone many transformations over the years. At the time when a Japanese map maker was ordered by Minamoto no Yoshitomo, the founder of the Kamakura Shogunate (1185-1333), to measure the length of the beach, one ri was about 600 meters on today's scale.The map maker correctly came up with a length of 99 ri for the beach, about 60 kilometers in today's counting. His generic note on the beach, indicating simply its length, eventually became the name of the beach.

The long stretch of reefless flat sand beach with no mountains to cross on the way to Tokyo must have looked like an open invitation for foreign invaders. Indeed, that was a worry for Edo shoguns but no serious fortifications were ever built.

During World War II, the American military devised a plan to land on Kujukuri Beach and to march towards Tokyo from there. Fortunately, Japan surrendered before any such landing was undertaken. It would have been an incredibly bloody battle and had it ever taken place, we would drive along a row of somber war memorials today instead of simply enjoying a swim in the waves and the quaint old countryside. 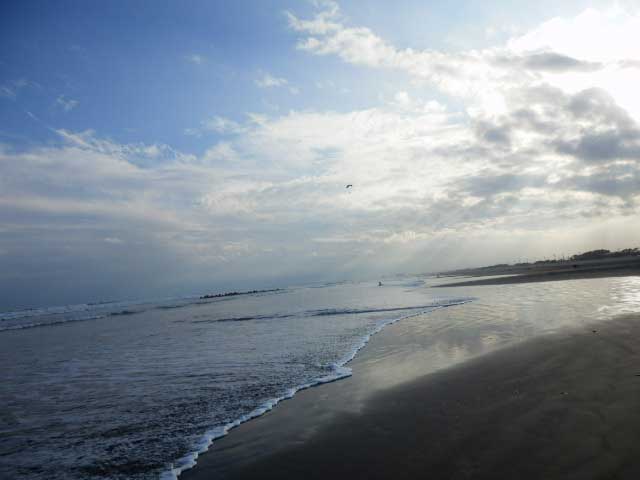 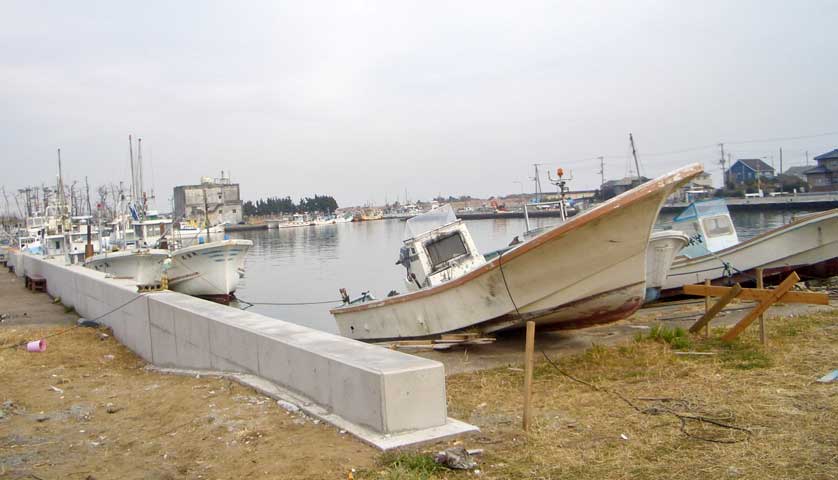 Kujukuri is famous for the sardines caught right off the beach. They are served to the staying guests in the minshuku and ryokan but there are also many restaurants serving them in traditional Japanese style.

One such restaurant is the Kazusa restaurant in the Katakai section of Kujukuri Town. It is located within walking distance from the small fishing harbor of Kujukuri Town, right at Highway 30 and sits next to a narrow, short access road straight to the beach.

Though Kazusa offers a variety of seafood and fish, sardines, iwashi in Japanese, are the main focus. Sardines are offered in a great variety of traditional Japanese fish dishes, ranging from sashimi to sushi to tempura to fried and many more.

There is so much more to sardines than the sardines in oil popular as cheap canned fish around the world. Kujukuri is a great place to find out what really good sardine dishes taste like. 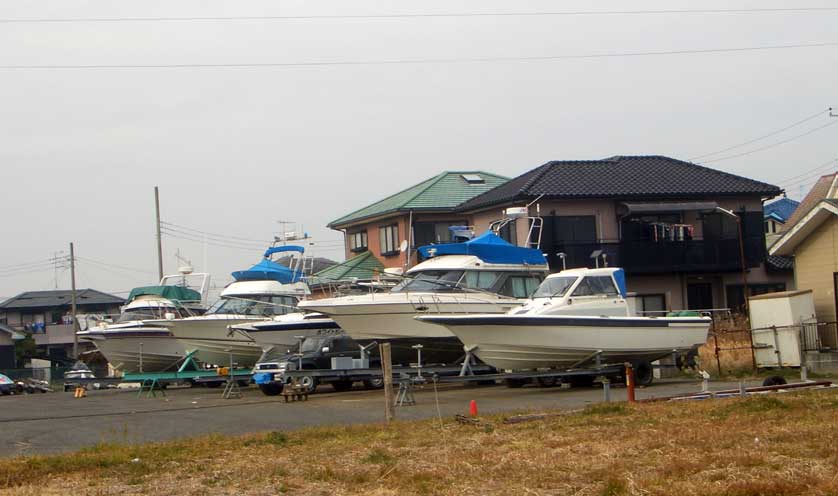 Going by hire car is by far the most comfortable way to visit the beach.

Once you leave Chiba City behind you, you are outside of the Tokyo metropolitan area. The Chiba - Togane Expressway is much less crowded than the various Tokyo - Chiba connections and once you are behind Togane, driving really becomes a pleasure.

You could quickly dart to the beach via the Togane - Kujukuri Toll Road or take one of the smaller but toll free roads. In either case, you enter the inaka, the Japanese countryside.

Small forests, vegetable fields and quaint old villages line the road the last dozen miles before you finally arrive at the coast.

There are no trains going directly to Kujukuri Beach. The JR Sobu Main Line (Chiba - Choshi) covers the cities in the northern third of Kujukuri Beach including Togane City and Asahi City. The train line runs inland more than 10 km away from the beach, however.

If you plan to go to Kujukuri Town, take the Sobu Main Line to Togane Station and from there a local bus.

Bus connections are scarce, however. Hitchhiking from the train station to the beach might be a viable option.

The Kujukuri Beach area is ideal for bicycling. It is flat, scenic and has usually very little traffic even on the main roads. There are many back roads between the villages where you will encounter next to no traffic at all, save the occasional farmer's tractor. 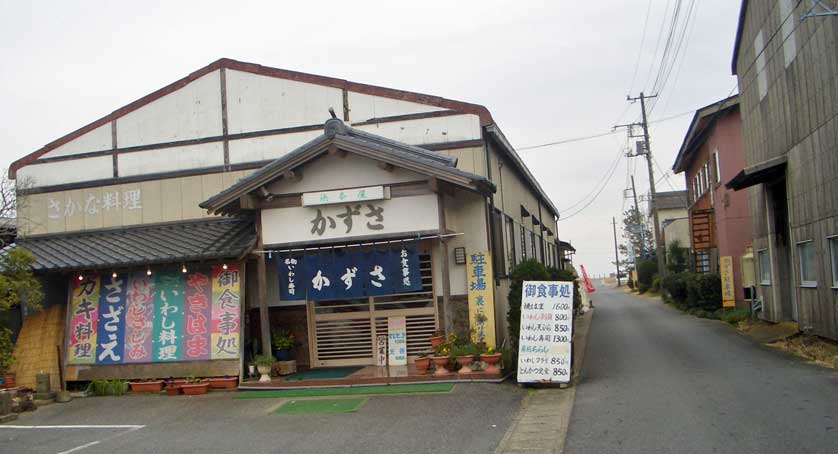 Open weekdays from 11am to 3pm for lunch, 5pm to 9pm for dinnerSaturday and Sunday open from 11am 9pmClosed on Wednesday and New Year's Day 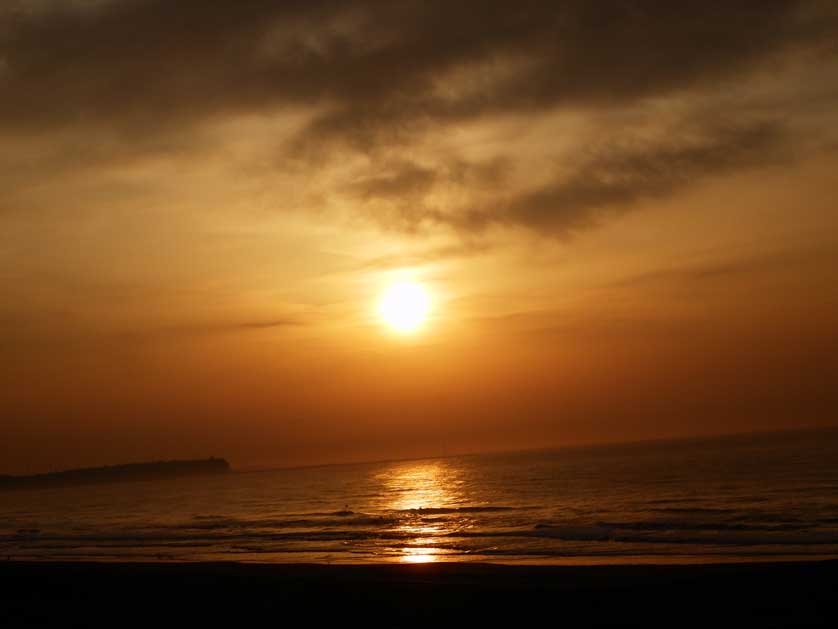