Eko-in Temple is in Ryogoku, Sumida ward, the district best known as being the center of the sumo world. Eko-in Temple, just five minutes' walk from JR Ryogoku Station, has been the spiritual home of sumo since tournaments began being held here from 1768 until the first Ryogoku Kokugikan was built in 1909. 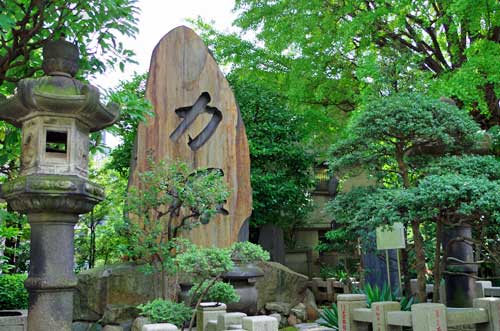 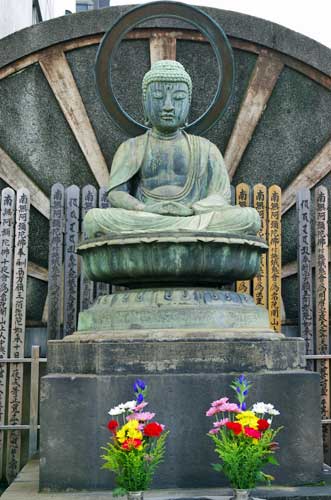 Eko-in Temple dates from 1657, the year in which the Great Meireki Fire ('Meireki no Taika', aka 'Furisode Kaji' or 'Maruyama Kaji') swept Tokyo for two days, destroying about two-thirds of the city and killing about 100,000 people.

The Shogun of the time, Ietsuna, wished to commemorate these victims, the majority of whom were not survived by family or relatives, and for that purpose set aside the land on which the temple now stands for their burial and erected a monument, Banninzuka, or 'The Mound of a Million Souls', to them.

It was around this that Eko-in temple was built. The temple has thus become a place where the victims of disasters and criminals, not survived or claimed by family or relatives, as well as animals, are laid to rest. 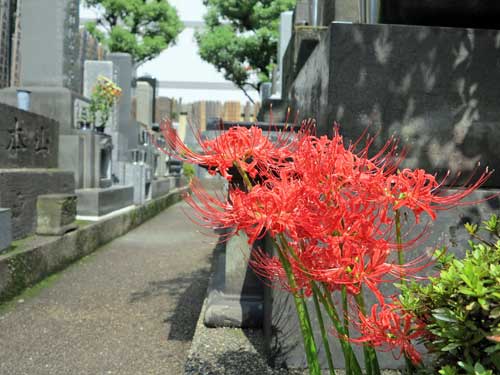 The original Banninzuka ('Mound of a Million Souls') monument of 1657 is now graced with a modern, elegant statue of the Kannon Buddha since 2002.

Through Eko-in Temple's torii gate and just to the left, only a few meters from the Banninzuka, is the Chikara-zuka, or 'Mound of Strength'. The Chikarazuka was erected in 1937 as a gift from Sumo Association in recognition of the central historical role the temple has played in the sport. The Chikarazuka stone has become the object of veneration for new sumo initiates, who seek from it whatever extra power great helpings of chanko-nabe stew have yet been unable to bestow.

As mentioned above, Eko-in Temple has long been associated with the repose of the souls of animals, especially cats. This dates from the death of the beloved pet cat of the Shogun Ietsuna, who founded the temple, and which he had interred here. 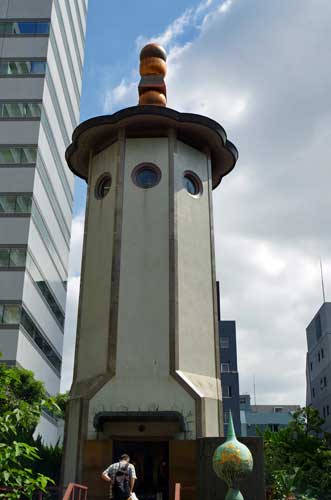 The Hall for Prayers for the Souls of a Million Animals, Eko-in Temple, Ryogoku, Tokyo

Since that time several shrines to animals have been built on the premises. The most conspicuous is the The Hall for Prayers for the Souls of a Million Animals (Shodo-dobutsu-hyakumanto-ekodo), a tower that dominates the premises.

Across from the tower, next to the cemetery, is a bamboo grove with a collection of various tombs and monuments.

If you happen to have entered the temple from the southern entrance (through a small door in the big black metal gate), it will be on your right as you come in. Two of the more interesting sights in here are the Mizukozuka and the Nezumikozo (Jirokichi) Stone.

The Mizukozuka literally means the 'Mound of the Stillborn', and commemorates the souls of stillborn infants or mizuko in Japanese. It was constructed here in Eko-in Temple in 1793 at the order of a member of shogun's council of elders.

Mizukozuka is a memorable sight for the elegant pair of statues that flank its entrance way, for the rows and rows of tiny Buddhas that line either side of it, and also, in loud contrast to the ancient worn stone, the scores of children's gaudy plastic windmills set along its edges that turn in the breeze - piquant reminders, no doubt, of what would have been the children to play with them.

Nezumikozo (real name, Jirokichi) (1797-1832) was Japan's Robin Hood, stealing from the rich and powerful and giving to the poor. Nezumikozo translates something like 'Mouse-boy': a reference to his stealth.

In keeping with Eko-in Temple's dedication to those without family to mourn them, the chivalrous thief is commemorated here.

It is believed that rubbing the Nezumikozo Stone, usually with a pebble, and putting the dust-coated pebble in your wallet will give you a share of the luck that Nezumikozo enjoyed in going for years without being caught and contribute to your wishes coming true. 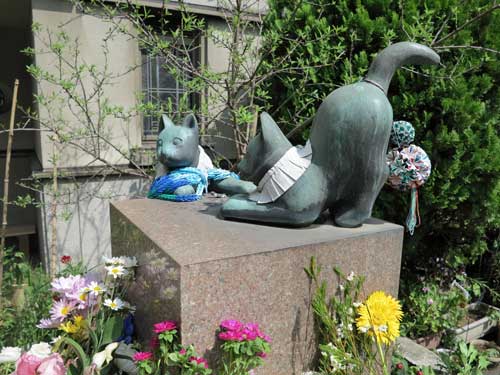 Cats are a frequent motif in Eko-in Temple, Ryogoku, Tokyo

Eko-in Temple is about five minutes walk south down Kokugikan-dori Avenue from the west exit of JR Ryogoku Station.

Ryogoku Station (Toei Oedo subway line) is one stop north of Morishita and one stop south of Kuramae.

Kinshicho Station is about 12 blocks to the east on the JR Chuo-Sobu Line and the Hanzomon Line of the Tokyo subway.

Eko-in is close to Ryogoku Kokugikan (Ryogoku National Sports Stadium) where Tokyo's sumo tournaments (basho) are held in January, May and September. Also close by are a number of sumo stables or heya where the wrestlers train and live during tournaments.

Also in the Ryogoku area is the excellent Edo-Tokyo Museum, Japan's premier museum dedicated to the history of Japan's capital city. Almost next door to Eko-in is the small but fascinating Ryogoku Fireworks Museum, which outlines the story of fireworks in Japan, from their arrival from China in the hands of the English trader John Saris during the Edo Period to the huge fireworks festivals held on the Sumida River in Tokyo and in such towns as Tsuchiura in Ibaraki Prefecture, Daisen in Akita and Nagaoka in Niigata.

Within easy walking distance of Eko-in are both Yokoami-cho Koen Park and Kyu-Yasuda Teien Garden. In the back streets around Ryogoku Park is a memorial to Lord Kira Yoshinaka on the spot where his residence once stood (吉良邸跡). History buffs and fans of Chushingura will remember that it was Lord Kira on whom the 47 Ronin (see Sengakuji Temple) wreaked their bloody vengeance in December 1702.

Places to stay in Ryogoku include the somewhat drab though functional Pearl Hotel right on the Sumida River across from Ryogoku Station and the newer Hotel Belle Grand, next door to Ryogoku Tourist Information Office.

The Dai-chi Hotel Ryogoku is close to Yokoami-cho Koen Park. The street running parallel to the JR Sobu Line tracks has some excellent places to eat, including the area's signature chanko-nabe as well as some fine Tokyo sushi restaurants with a lively, local atmosphere. 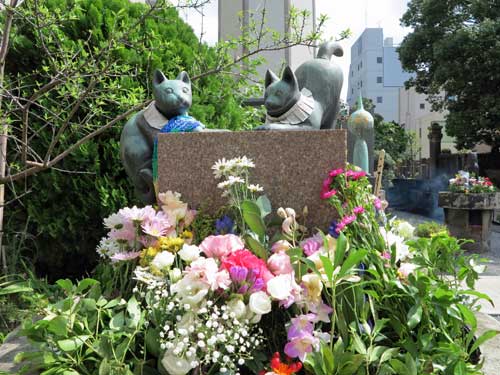 Eko-in Temple in the Ryogoku area of Tokyo is the spiritual home of sumo and a place where the victims of disasters, criminals and animals are laid to rest.