Toyokawa Inari Temple in Tokyo's Akasaka district is a Buddhist temple that venerates a Shinto deity, the fox god, or Inari. 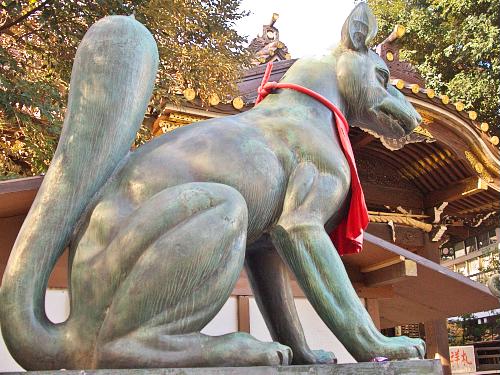 The third son of the 13th century Emperor Juntoku is said to have had a religiously inspired vision of the god Dakini-Shinten riding a white fox. Toyokawa Inari as a Buddhist temple was under threat of obliteration by way of forcible conversion to a Shinto shrine in the early Meiji era of Japanese history, when the state promoted "native" Shinto at the expense of "imported" Buddhism as part of the new government's modernizing, nationalistic drive to define what was "Japanese."

The temple managed to maintain its Buddhist identity by asserting (for the purposes of survival in the face of persecution) that the real object of worship at the temple was the impeccably Buddhist Dakini-Shinten, not the Shinto fox on which he rode, the fox being, it claimed, a "subject" of Dakini-Shinten, and a symbol of his revelation to the prince. (See The Fox and the Jewel by Karen A. Smyers for a study of this fascinating historical puzzle.)

Toyokawa Inari Akasaka was established in its present site of Moto-Akasaka in 1828, and, significantly, the statue of Dakini-Shinten was enshrined here in 1887, at the peak of the Meiji government's persecution of Buddhism, in order to reaffirm the temple's Buddhist credentials.

Nearby Akasaka-mitsuke - just a couple of hundred meters down Aoyama-dori Avenue, was a well-known red-light district from the time of the Edo era, and this may well be why Toyokawa Inari is now the temple visited by those Japanese in the music and entertainment industry. This is most obvious on New Year's Eve, December 31, when singers, actors, TV personalities, artists, designers, writers - anyone in the creative arts - pray to the Benzaiten (or Benten) enshrined here for good fortune in the year to come. 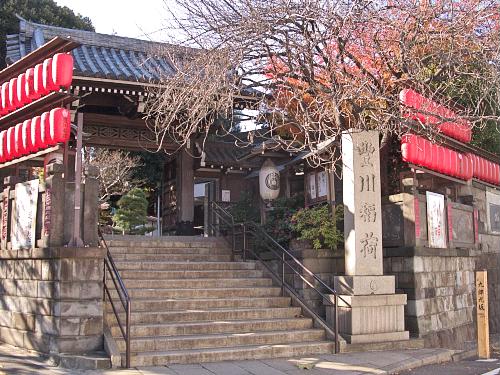 Toyokawa Inari Temple is easily identified by the red lanterns decorating its long earthen wall on the north side of Aoyama-dori Avenue.

The temple is also distinctive inside for two things in particular. One is the thousand red banners that flutter here for the health, wealth, and safety of petitioners. The other is the hundreds of fox statues (and even a few frog statues), mostly in stone, and in different shapes, sizes, postures, expressions, and degrees of wear and tear, that decorate the grounds.

Inside the temple precincts are several structures of significance, the main one being the Main Temple building, which can be freely entered. The Main Temple building is a complete amalgam of the Buddhist and the Shinto, completely Buddhist in atmosphere and decoration, except for the object of veneration which is the mirror of Shinto tradition.

Benzaiten (or "Benten") is the only Indian member of Japan's traditional Seven Deities (Shichifuku pantheon) - the others being Chinese in origin. The shrine to Benzaiten is just to the left of the Main Temple, and is the object of veneration of artists and entertainers. The other Shichifuku gods are relegated to a corner of the temple precincts, behind where the red flags are.

Yuzu Inari Sonten is the god of wealth, with a shrine to it right in front of the shrine to Benzaiten.

A large Statue of Kodakura Kannon Bosatsu the bodhisattva of childbirth, stands grandly against the eastern wall of the temple, in front of the temple's event hall (Tokokawa Inari Betsuin Kaikan), and is worshiped by hopeful or expectant mothers. 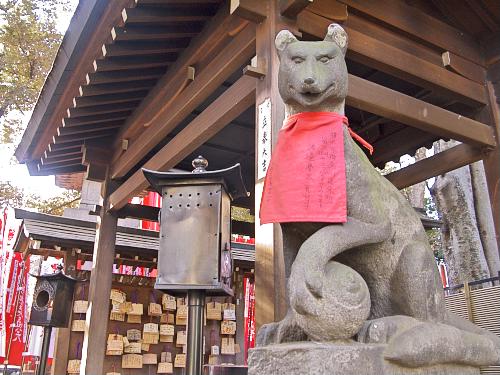 Nearest train stations
-Exit 8, Akasaka-mitsuke Station on the Ginza and Marunouchi Subway Lines;
-Exit 8, Nagatacho Station on the Namboku, Yurakucho and Hanzomon Subway Lines.
Exit 8 is accessible from both these stations, and it is a 3-minute walk up Aoyama-dori from there to Toyokawa Inari Temple Akasaka.

Toyokawa Inari Temple Akasaka is a fascinating mix of Buddhist and Shinto in Tokyo's Akasaka district.