Hanazono Shrine in Shinjuku, Tokyo is an historic shrine connected with entertainers and known for its cherry blossom and Reitaisai festival. 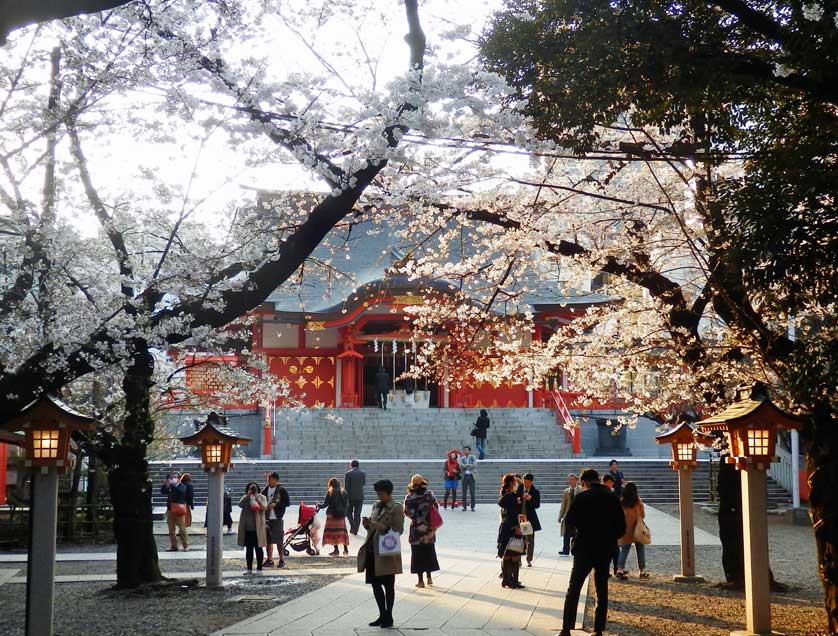 Hanazono Shrine, Hanazono Jinja in Japanese, is a large, ancient Shinto shrine in the very heart of Tokyo's bustling Shinjuku ward. It is considered the most important shrine of Shinjuku, the shrine guarding the area, its inhabitants, merchants, craftsmen and artists.

Located only a few minutes on foot from Shinjuku Station on the Yamanote Line and the Kabukicho entertainment district, the shrine is somewhat hidden behind buildings lining Yasukuni Dori Avenue.

After about a two minute walk, you will see a small alley to your left, framed by a stone torii gate. It is located between a Family Mart convenience store and the Tsukiji Sushiko sushi restaurant.

Enter the tree-lined alley. It will lead you right into the center of Hanazono Shrine. 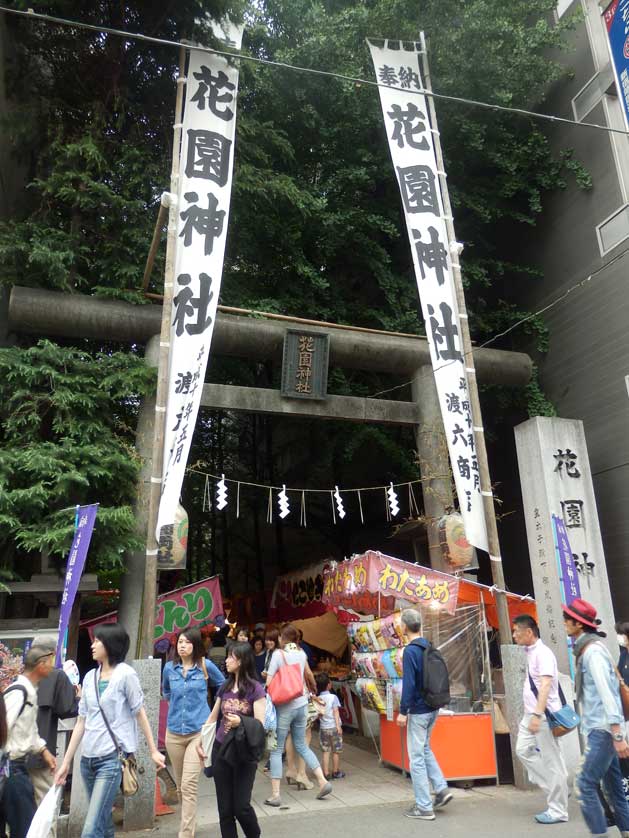 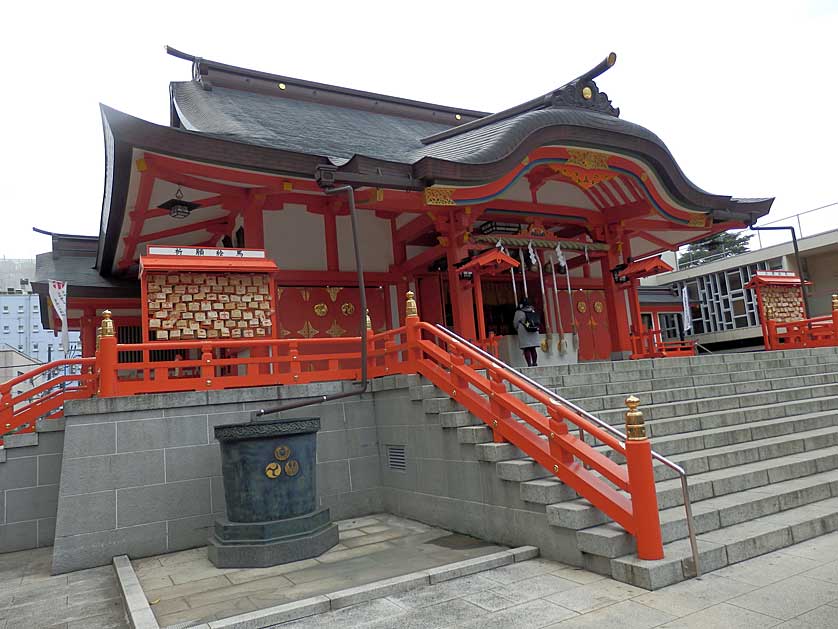 Though surrounded by modern buildings, the shrine itself is quiet and serene. Its main building, the honden, stands on top of a stone staircase, overlooking the small wooded park belonging to the shrine.

It is quiet and serene on most days of the year, let's say. The shrine features several large festivals during the course of the year, on those days expect big crowds on the grounds.

The shrine is also very popular during the sakura cherry blossom season in late March / early April due to its many cherry trees.

In the evening, the shrine is colorfully lit up and invites a romantic stroll. 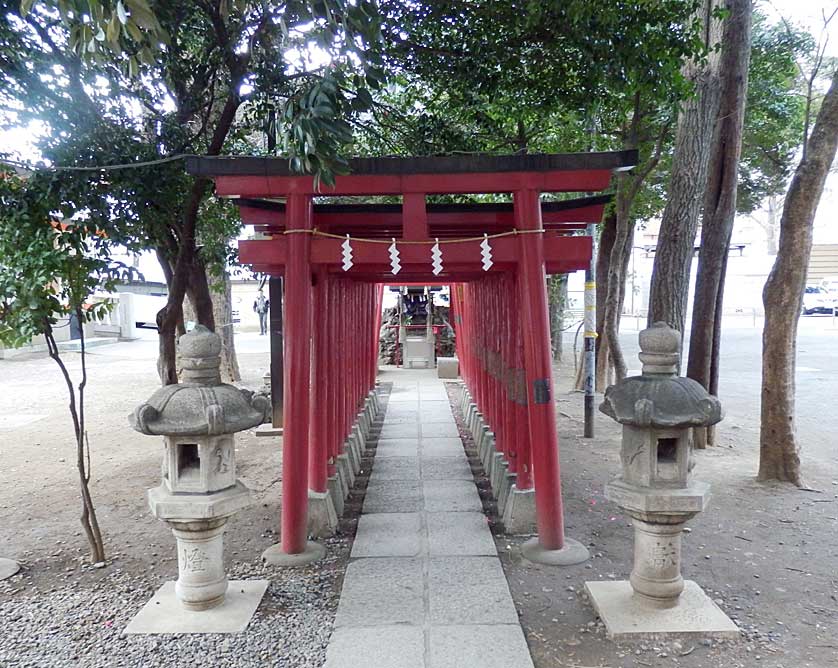 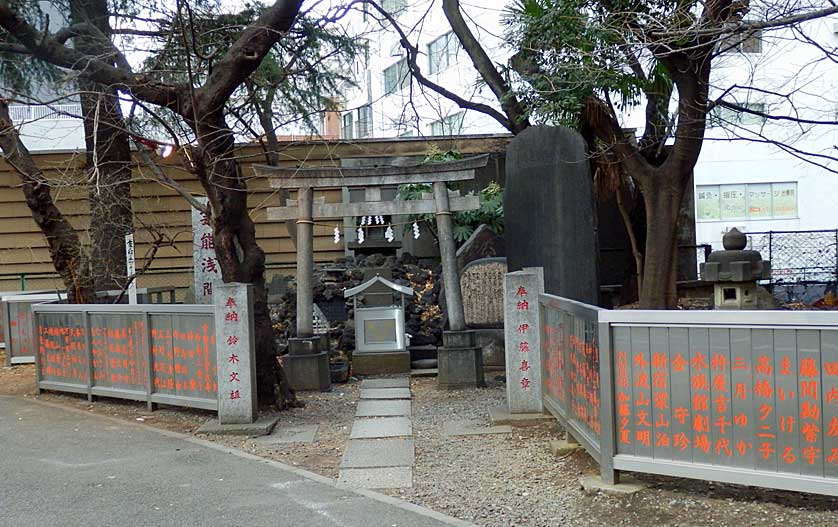 The origins of the shrine are unknown. It is known, however, that the shrine already existed in 1590, when Ieyasu Tokugawa took over Edo, today's Tokyo. Soon after, in 1603, Ieyasu established Edo as the capital of Japan, ushering in the Edo Era (1603-1868).

At that time, the shrine was at a slightly different location, however, on the grounds now occupied by the Isetan Department Store.

During the Kan-ei period (1624-1644), a vassal of the shogun, Lord Asakura, Chikugo-no-kami, received land from the Shogunate to build one of his Edo area residences. This land included the grounds of Hanazono Shrine.

The shrine petitioned the Shogunate and received its current grounds as compensation. The new land had formerly belonged to the suburban residence of the Owari samurai clan. It was overgrown by many colorful flowers. It is said that the name Hanazono Shrine originates from that time. Hanazono translates as Flower Garden.

At that time, Shinjuku was still fairly far outside of Edo. The area began however to develop due to a new way station opened on the Ome Kaido / Koshu Kaido Road, serving as a shortcut on the Nakasendo Highway connecting Edo with Kyoto. "Shinjuku" thus translates as "New Way Station."

Soon, the new post station was joined by eateries as well as prostitutes serving the travelers. Entertainers set up their tents, offering raunchy theatrical plays, an early form of kabuki.

The Hanazono Shrine has been deeply involved in Shinjuku life ever since. Both with the ever increasing number of merchants using Shinjuku as their base on the much traveled road, as well as the entertainers for which Shinjuku soon became famous. 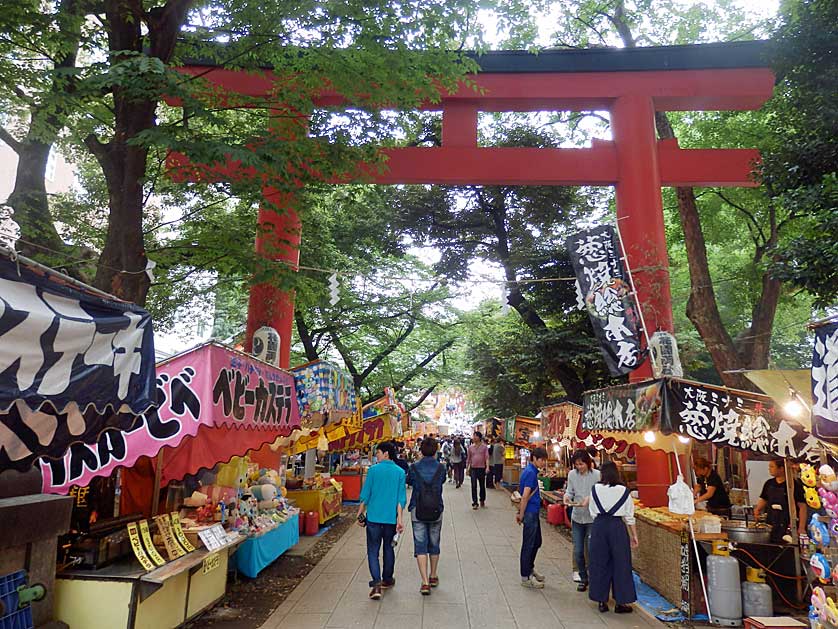 Hanazono Shrine is dedicated to Inari Okami, the god / goddess of trade and worldly success.

The current honden, the main shrine hall, was erected in 1965 and is made of sturdy reinforced concrete.

The shrine features several smaller sub-shrines. One of them is the Itoku Inari Shrine, a typical Inari fox shrine with a multitude of small torii gates in front of it.

The Geino Asama Shrine is dedicated to the good fortune of performers of all kinds. Many Japanese actors, singers, etc. pray at the shrine before important performances. Some of them have donated large amounts of money to the shrine. The names of the latter are written on boards, forming a wall around the sub-shrine. 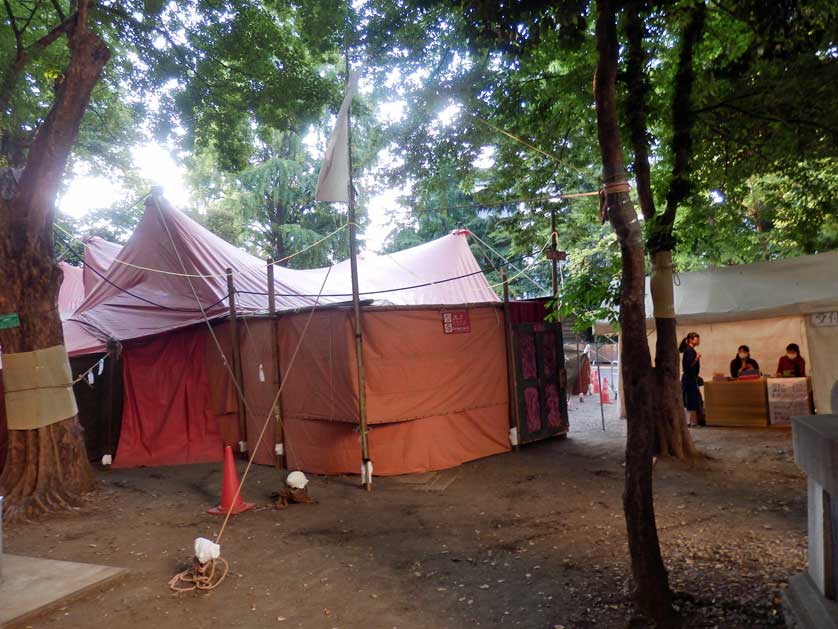 Located right next to Hanazono Shrine is Golden Gai, a warren of alleys with tiny bars in virtually every building. Traditionally, those bars often served as second homes to writers and artists of all stripes. Many of those artists also had a more or less close connection to the shrine.

One of the most influential figures challenging traditional mores was Juro Kara, a visionary director with his own theater company. His theater group was based in a red tent set up on the grounds of Hanazono Shrine.

Juro Kara is still active today and his theater group still sets up their red tent on the grounds of Hanazono Shrine every once in a while, staging thought-provoking avant-garde plays.

Juro Kara theater website has information on upcoming plays (not only at Hanazono Shrine) at ameblo.jp/karagumi (in Japanese). 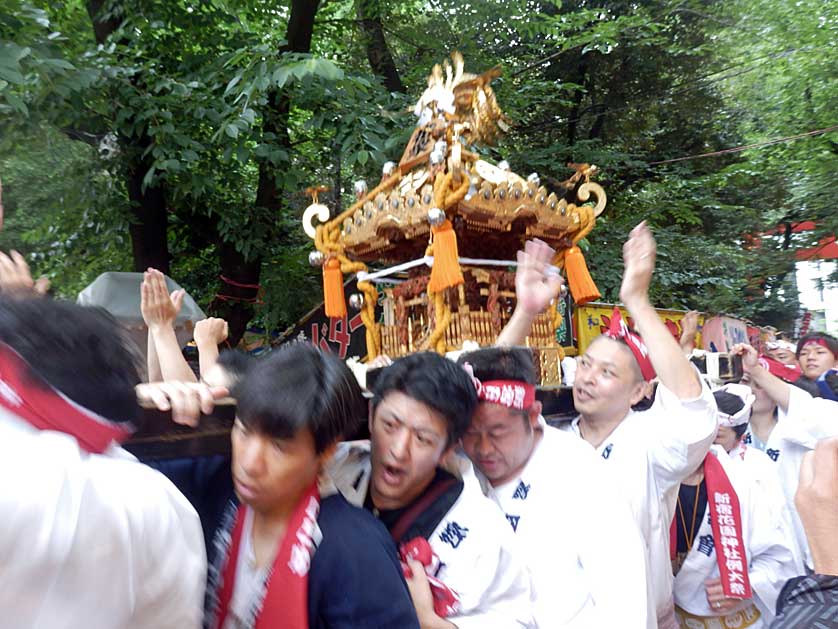 Hanazono Shrine offers several large festivals throughout the year. The most notable festivals include the New Year's Prayer on New Year's Night, the Reitaisai Festival in late May as well as the Tori-no-Ichi Festival in November.

The Reitaisai Festival, the most important of the shrine's festivals, is held in late May, it lasts for three days. During the festival, more than 100 booths are set up on the shrine grounds, selling sweets and traditional festival food.

Mikoshi float (portable shrine) parades are held, starting out at the shrine, then circling the neighborhood before returning. For Shinjuku, that's a rare sight - and it greatly contrasts with the modern structures and shops all around the shrine.

The Tori-no-Ichi (Rooster Market) Festival in November is one of the biggest of its kind in the Kanto area. It serves as a kind of Japanese Thanksgiving. Again, many booths offer festival attractions, parades are held. The festival is perhaps best known for the many colorfully lit paper lanterns decorating the shrine during its course. 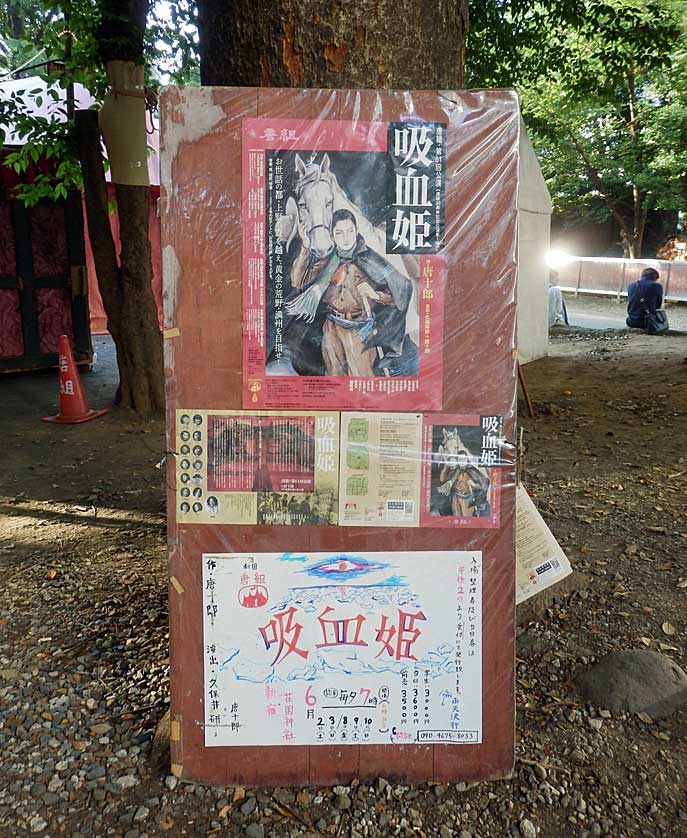 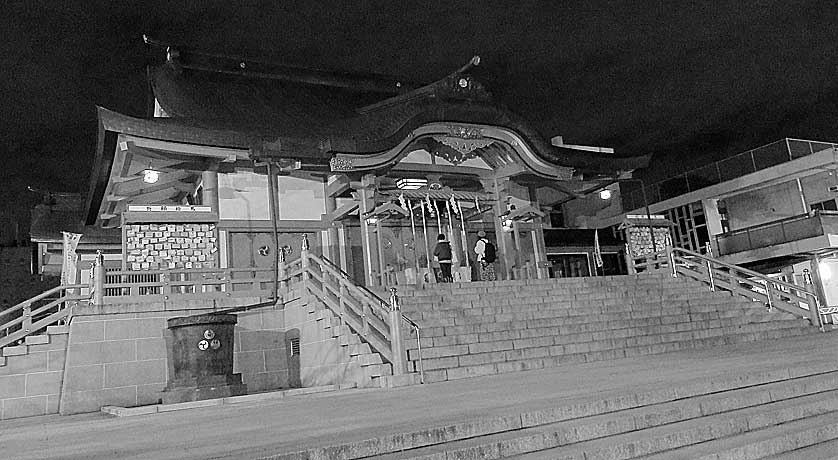