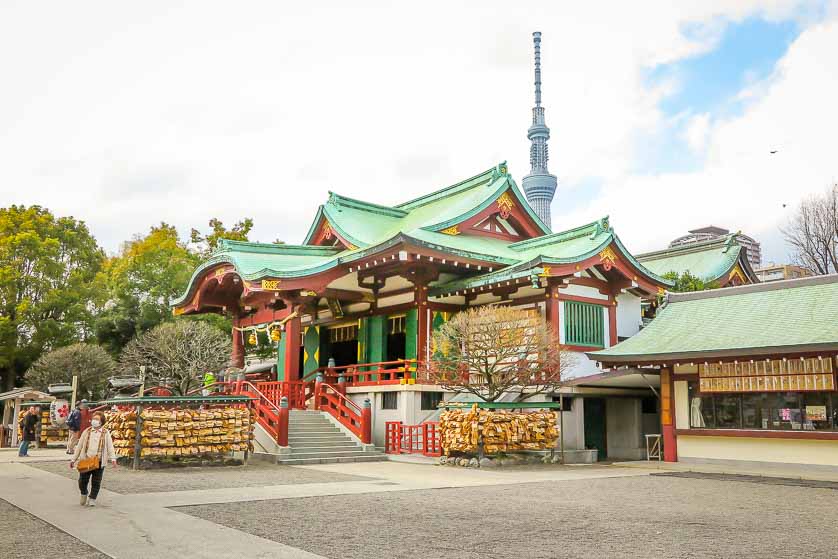 Kameido Tenjin Shrine, in the small eastern Tokyo district of Kameido, is a particularly beautiful Shinto shrine with elaborately landscaped grounds, plum trees, and, in springtime, a profusion of wisteria.

Tenjin is a deity in the Shinto pantheon, and there are numerous shrines throughout Japan dedicated to him. Tenjin is the posthumous, deified, name of Sugawara no Michizane (845-903 A.D.), an outstanding ancient Japanese poet.

The shrine has a bronze statue of Sugawara no Michizane in its garden depicting him at five years old, when he is said to have composed his first poem. 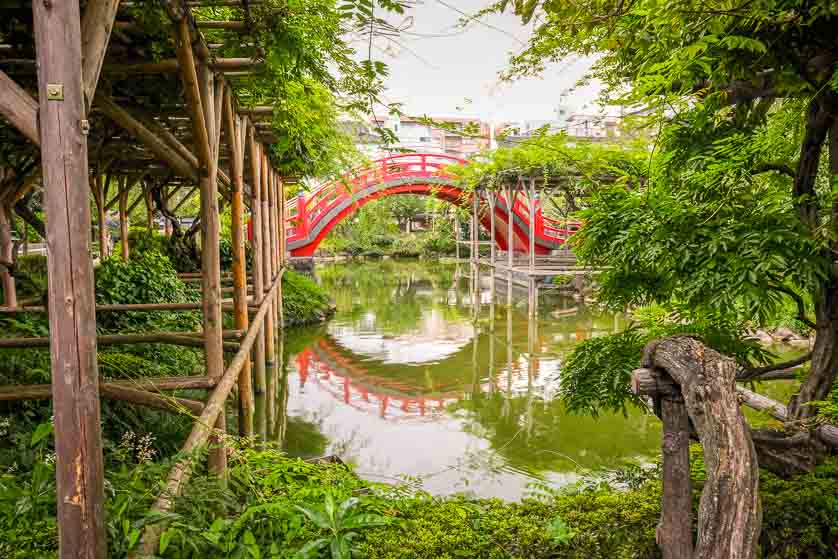 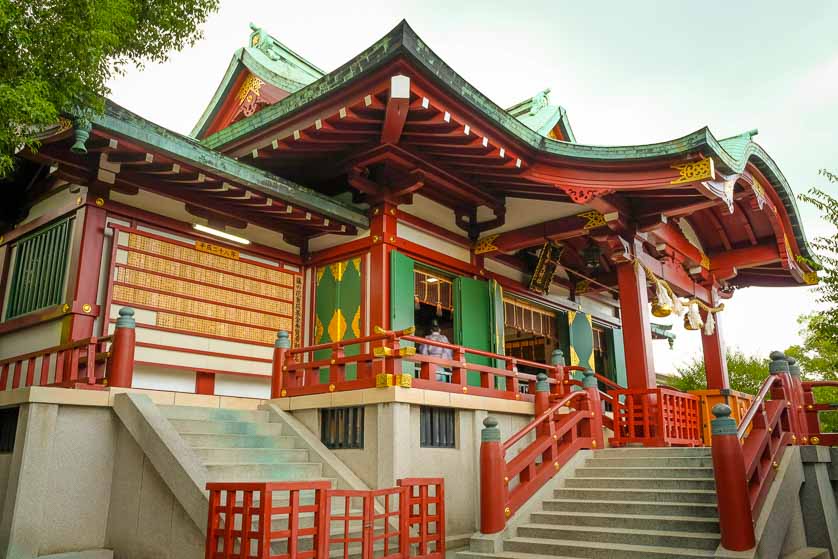 Kameido Tenjin Shrine was first built here in 1646. Its founding was the result of "missionary" work by a descendant of Sugawara no Michizane in the mid-17th century. He was a priest of Dazaifu Tenmangu Shrine in Dazaifu, Fukuoka Prefecture and he created an organized religious movement based on his illustrious ancestor. He toured Japan promoting the "Tenjin faith" and founding shrines to Tenjin wherever he could. The village of Kameido at that time already had a small Tenjin shrine of its own, but in 1661 the visiting priest added to it a Tenjin image carved from a sacred plum tree from his home shrine. The current Kameido Tenjin Shrine is taken to have been founded at that point in time. 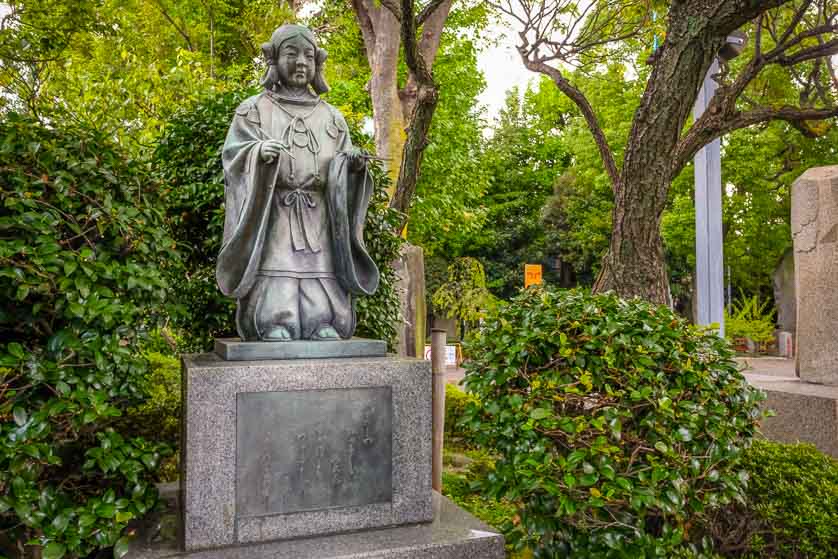 Also, Edo (the former name for Tokyo) had burnt to the ground four years before in the Meireki Fire. So, the Shogun, based in Edo, temporarily relocated to Kameido, on the outskirts of the city and made the Tenjin Shrine his official shrine. It was at this time that the shrine was given its distinctive landscaping, based on Dazaifu Tenmangu Shrine in Fukuoka.

Kameido Tenjin Shrine was destroyed in World War Two and rebuilt in stages from 1947, achieving full restoration in 1979.

Being a Tenjin shrine, it is a popular place for students to pray at when seeking examination success. 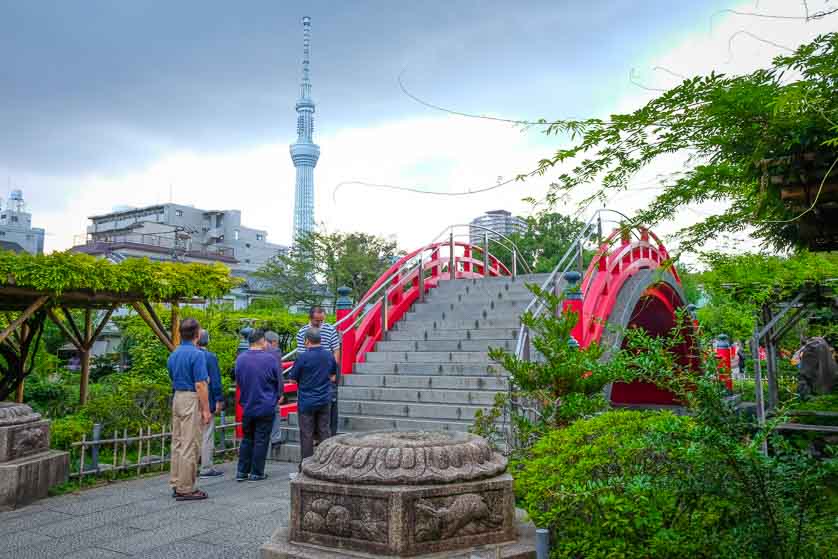 The shrine is characterized by its profusion of plum and wisteria trees, its pond, stone lanterns, and two arched vermilion bridges over the pond.

The main shrine building, restored in 1979, is flanked by plum trees and has a dramatic "samurai helmet"-style roof with gold fittings around the eaves. It was rebuilt to emulate the grand building erected by the Shogun in the 17th century.

The is a bronze statue of a cow (called a nade-ushi or "stroking cow") in a shelter in front of the main shrine. The cow is a symbol of the Tenjin faith, and visitors stroke it for good fortune.

An old stone lantern on the grounds is a gift made in 1781 by the prominent merchant, Tasuke Shiohara.

The small shrine holding the Tenjin image carved from the sacred cherry tree of Dazaifu and given to the shrine in 1662 was restored in 1988. It is called the Kobaiden and is located on the left side of the grounds when going in.

The "kame" in Kameido means "turtle" or "tortoise", and the pond here is well-known for is large tortoise population - and also has fish. However, the tortoises, although famous, were not intentionally introduced to the pond by the head of the shrine, but surreptitiously by parishioners. They have, however, become a symbol of the shrine, immortalized, for example, in the bronze tortoise from whose mouth issues a stream of cleansing water in the shrine's temizuya or hand-washing font.

The Tokyo Skytree towers behind the shrine, adding a sleek modern element to the scene. 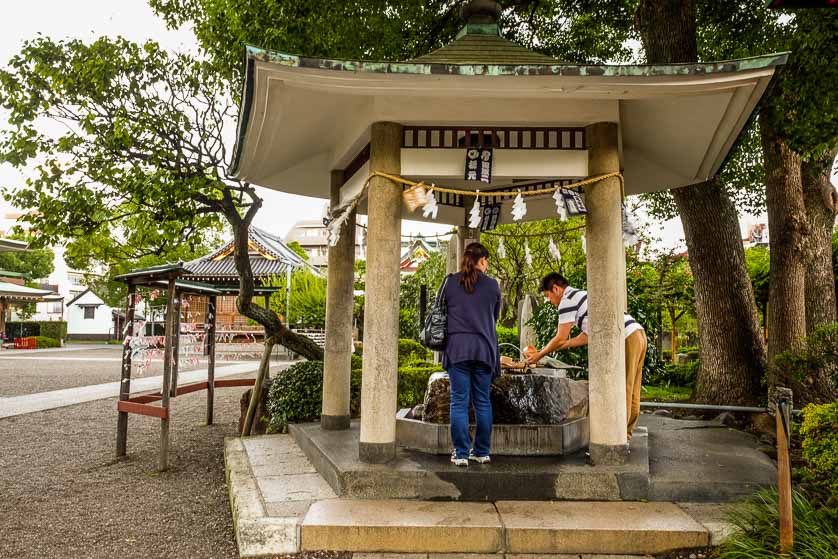 The Usokae Festival is a very distinctive traditional rite that takes place at Kameido Shrine on January 24th and 25th.

The shrine's annual Wisteria Festival (Fuji Matsuri) takes place from about mid-April to early May.

The main shrine building is open between 6 a.m. and 5 p.m. daily, and the grounds are accessible 24 hours. Free admission. 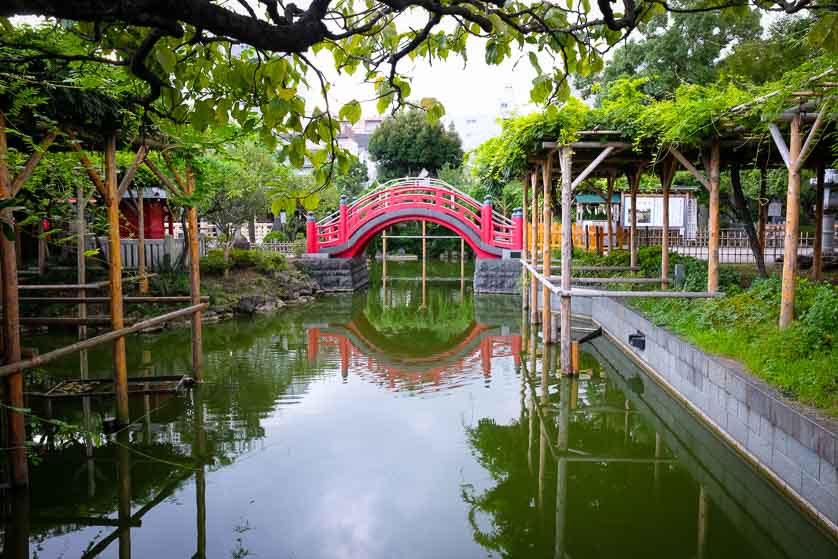 Kameido Tenjin Shrine is accessed via a 40 meter-long side street off the main Kameido Tenjin-dori Avenue (Route 315) that runs through Kameido. The side street has been made the virtual sando (shrine entrance pathway) to the shrine, leading up to its torii gate.

There are entrances either side of the main entrance that are wheelchair accessible.

The Fukagawa district, full of history - especially historical shrines and temples - and with a lot of beauty spots for the walker, is just south-west of Kameido.